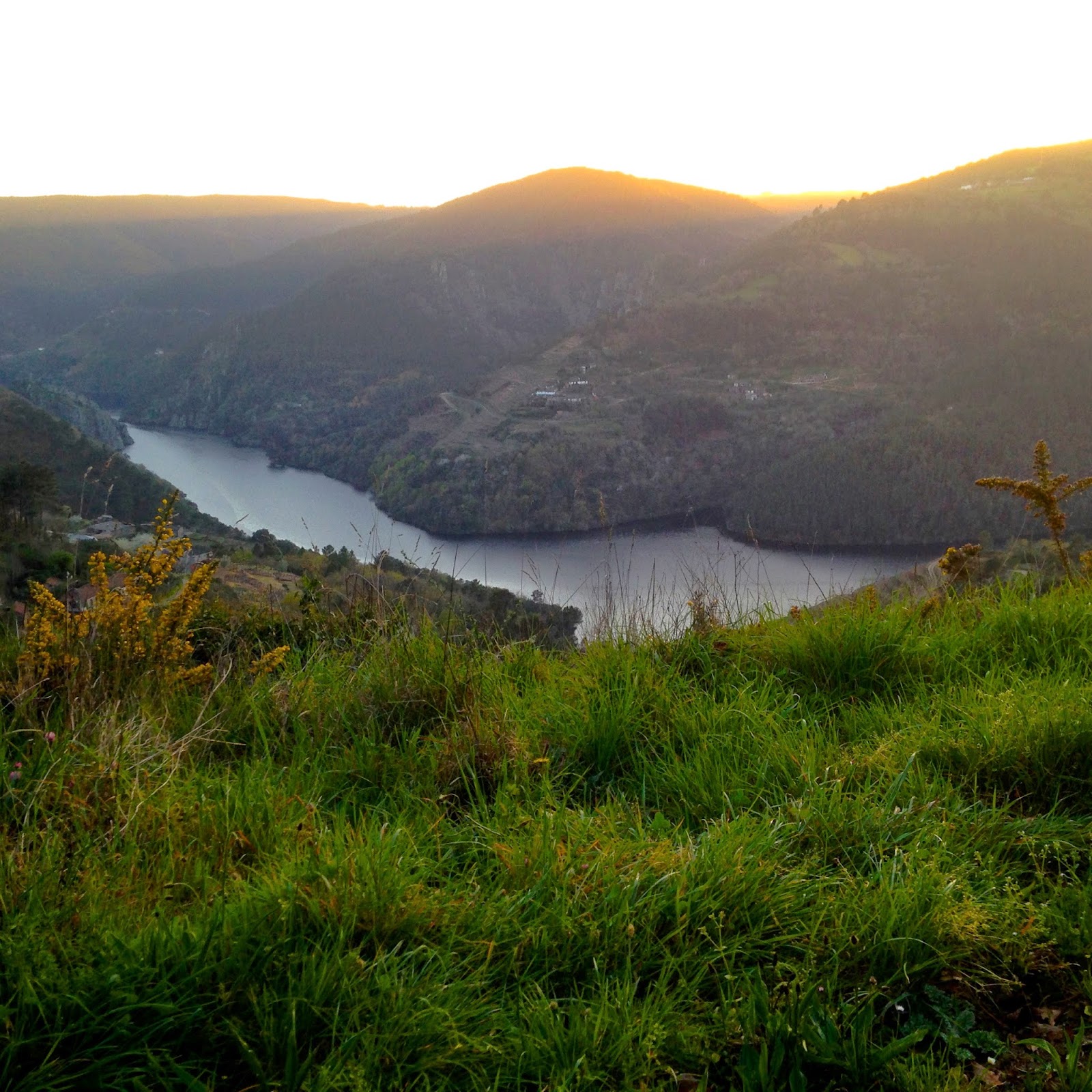 For the first time this Easter holiday, I stayed in Spain. I've been working way too hard the past few months to plan a big elaborate vacation, and I found myself without any desire to travel. For someone like me, who normally thrives on voyaging as far and wide as possible, my dearth of desire definitely meant that I'd been doing too much.

Still, I'd been a little bummed at the idea of spending my whole vacation sitting around Alcalá. I needed a break, albeit one simple to plan, and so I was happy when my Galician friend who lives in Madrid announced that she was going to go home to see her family for the week, and that I should come with her.

Not one to wait to be asked twice if I want to go back for a visit to my favorite part of Spain, I jumped at the chance. We immediately booked a Blablacar (car sharing) for the next day, and I went home to get my things together.

We had to be up bright and early the next morning to meet our fellow passengers, which meant that I spent much of the first part of the voyage dozing. But a few hours later, I woke up to the cry "Estamos en Galicia!!"

I looked out the window to see that we were in those beautiful green mountains that I love so well, looking down on valleys full of toxo (toe-shoh) in bloom. 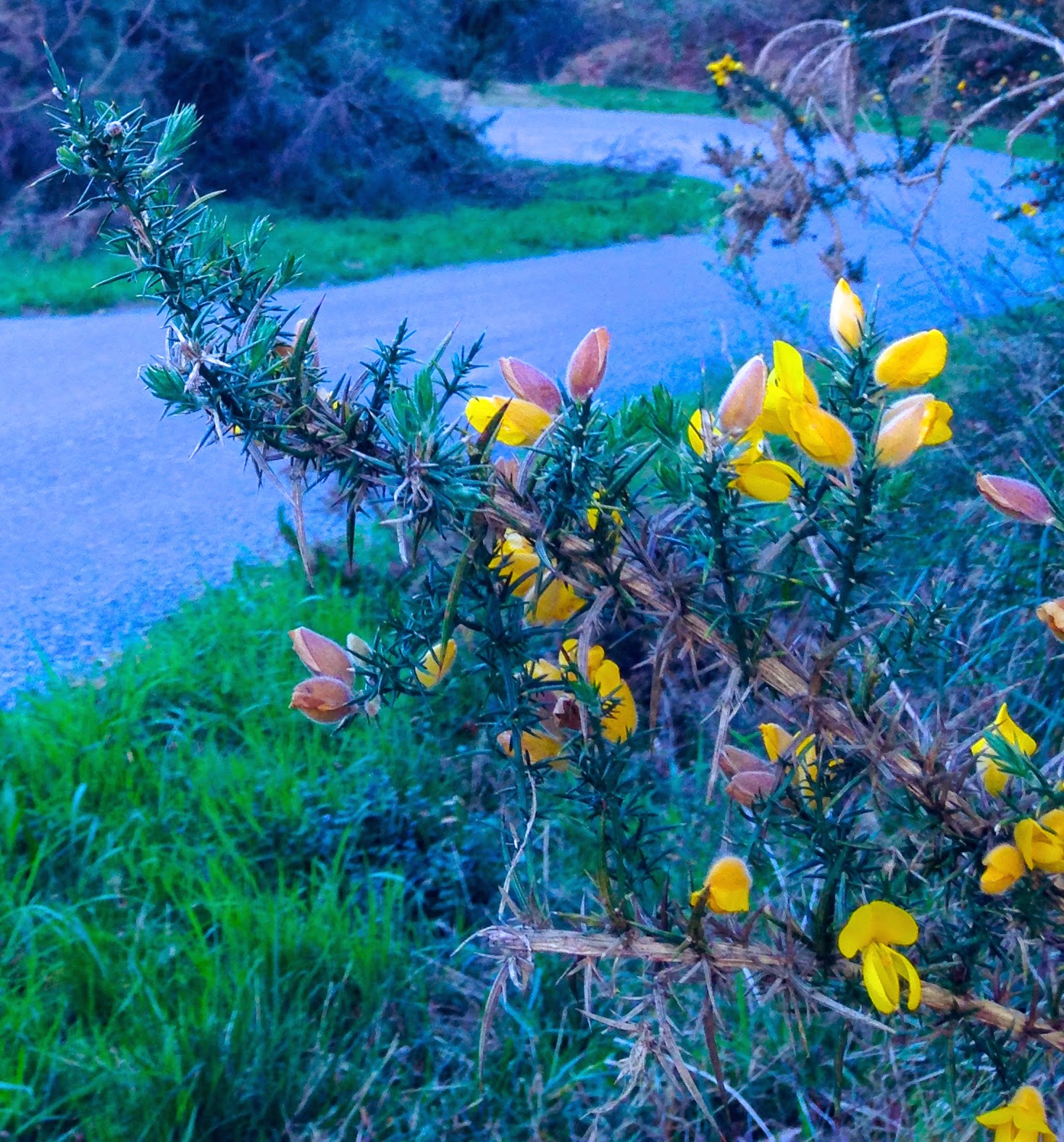 Toxo is a prickly plant that to me, represents Galicia. It happens to be the very first word that I learned in galego and didn't already know in Spanish (and I still don't know, or care to know, the translation in English). It's everywhere on the hillsides there, and most of the time it just looks snarly, but in the spring the toxo blooms, and all of the mountains erupt in yellow. Looking out the window at the toxo, I was suddenly transported back to my daily car trips to and from my work in A Cañiza, when I became intimate with the many species of plants on Galician hillsides, and when exactly each one of them is in bloom. When topics of conversation are short, and you have to share a car with the same people for an hour and a half every single day, you learn a lot about nature and the weather! 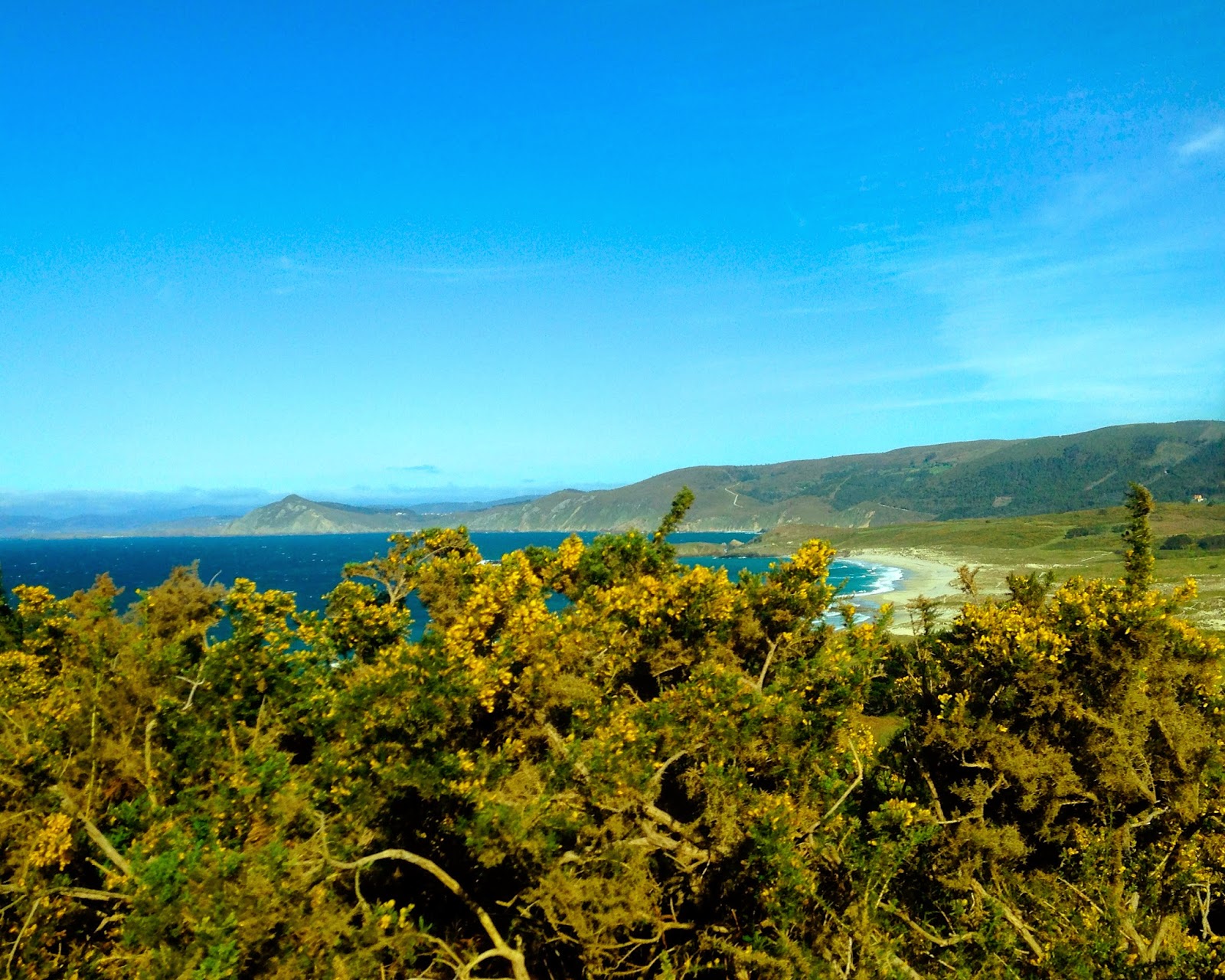 Upon seeing the toxo on the hillsides, I suddenly had a feeling of being back home. This year in Spain, I've been fighting a feeling that this isn't where I belong. I felt deceived, because I thought that the love I'd once had for Spain had disappeared. But upon entering Galicia again, I remembered that it wasn't exactly Spain that I'd fallen in love with back in the day, but Galicia. It wasn't until I lived in Vigo that I felt like I could see myself staying where I was long-term. Vigo is the only city I've lived in, to date, that I have felt that way about, that I've really loved.

So even though it was my friend's house and family that I was visiting, rather than my own, I had the distinct feeling that it was miña terra galega too. I know my Galician friends are laughing at my having written that, but it's the truth. From the moment I got out of the car in Ourense, I felt more at ease and relaxed than I have in months. 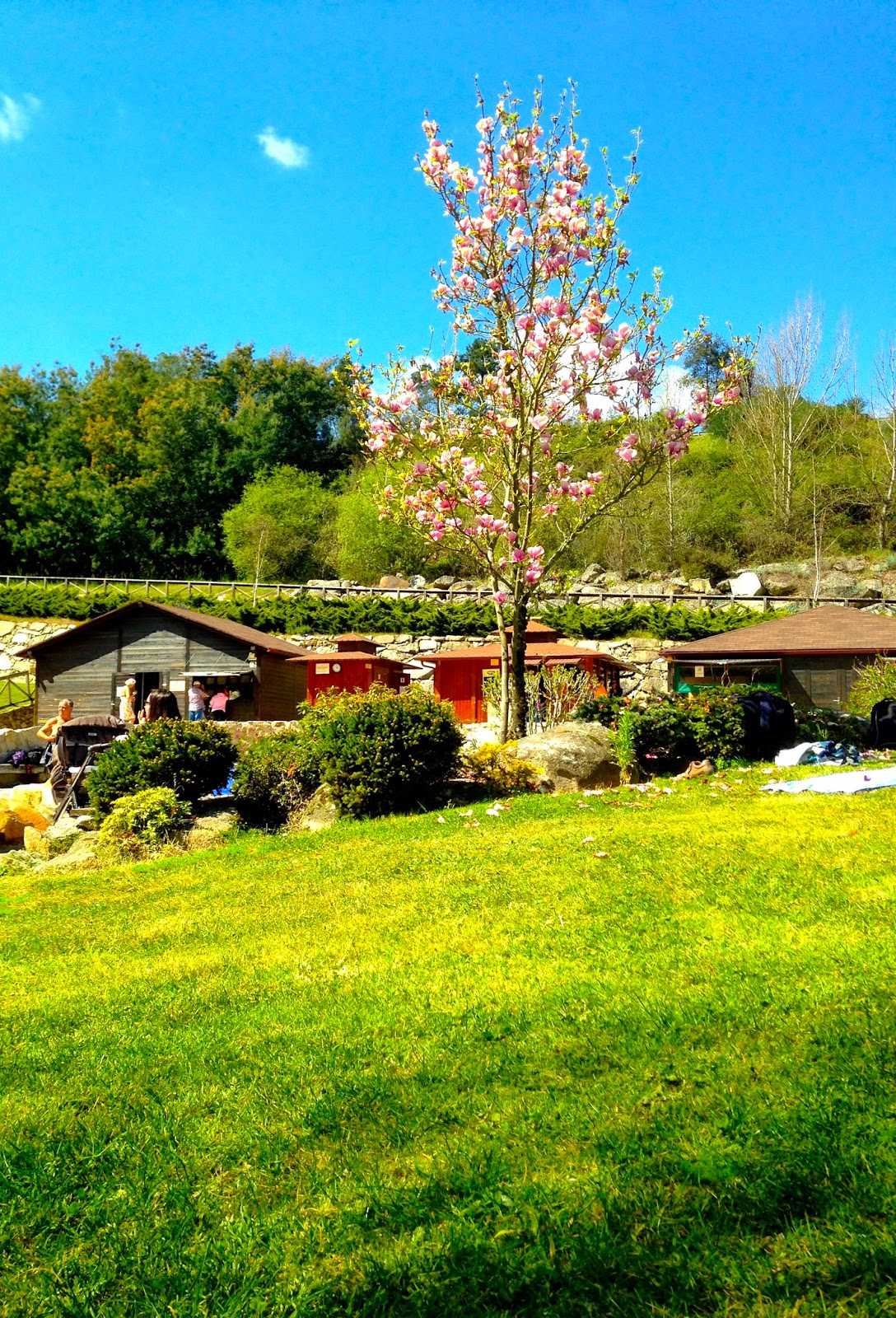 Of course, it didn't hurt that the very first thing we did was visit Ourense's thermal hot springs, which was almost as pleasant on a sunny spring day as on a rainy winter one, although I did get slightly sunburnt. 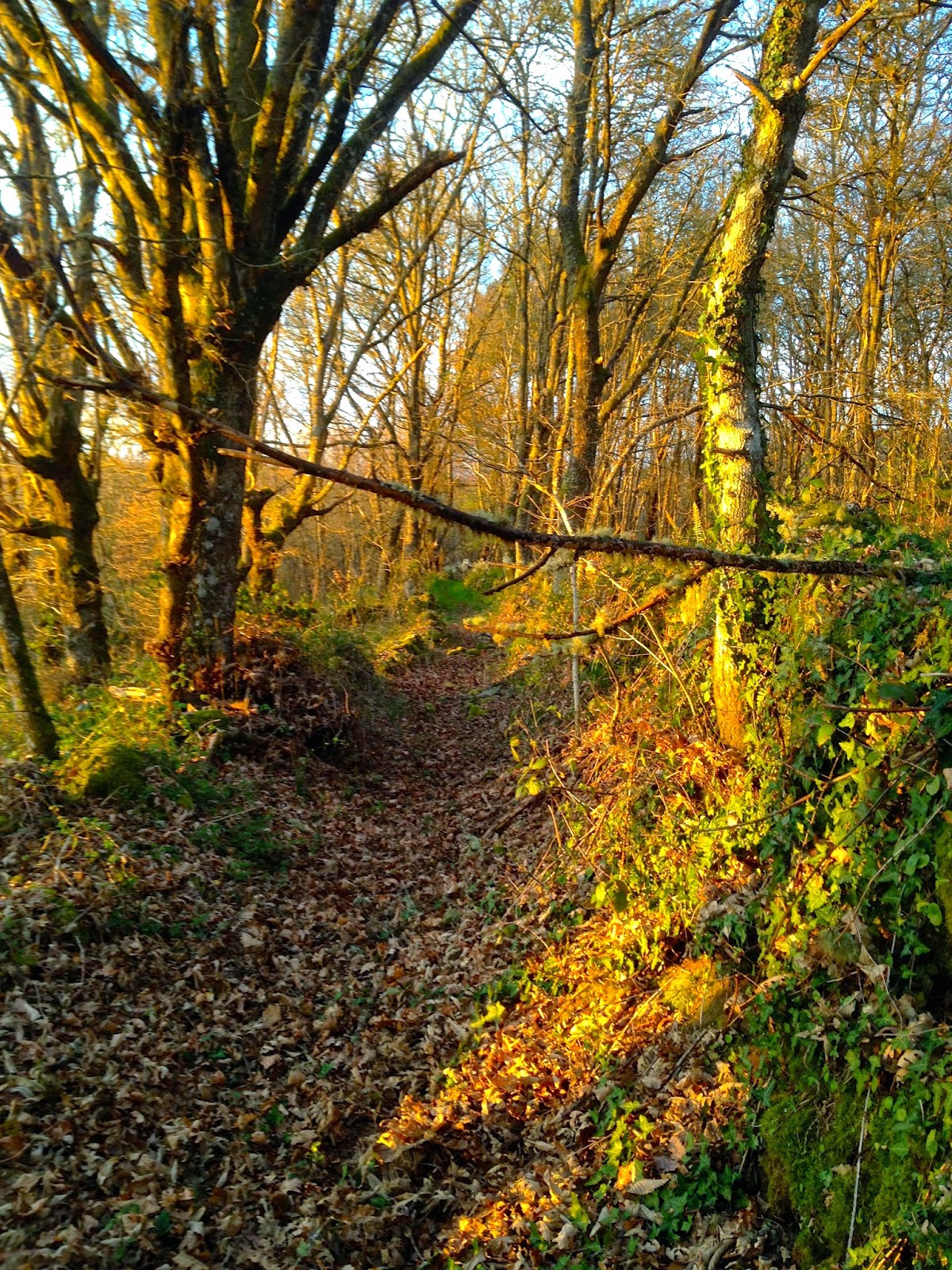 Next up was a walk in the woods near my friend's family farm with her little cousins, which also made me feel like I was back at home. My family has a farm out in the middle of nowhere too, and I spent a lot of time in my childhood taking walks in the woods, checking out the different plants and animals, so I could almost imagine that I was back with my own family, going on an adventure. 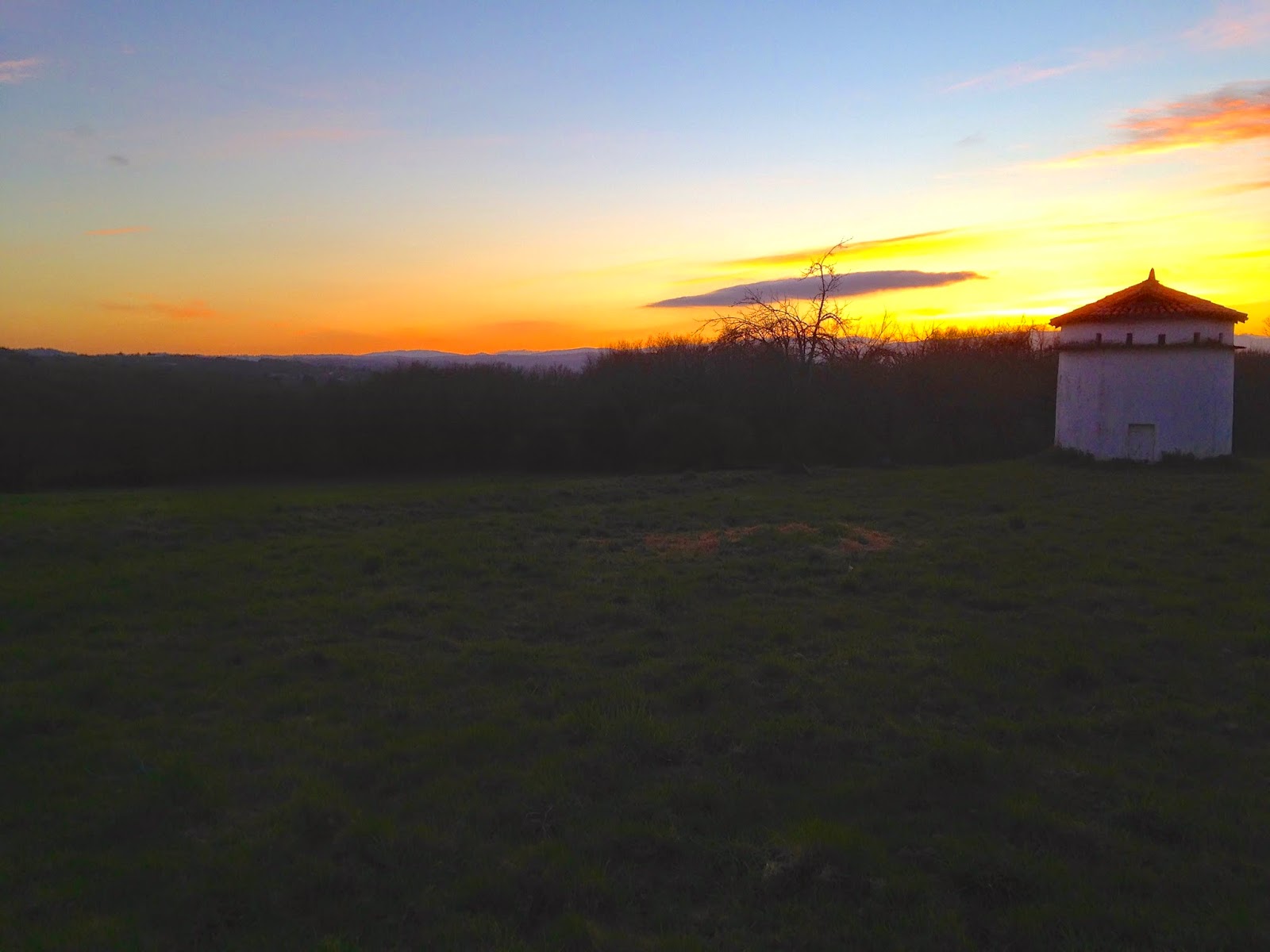 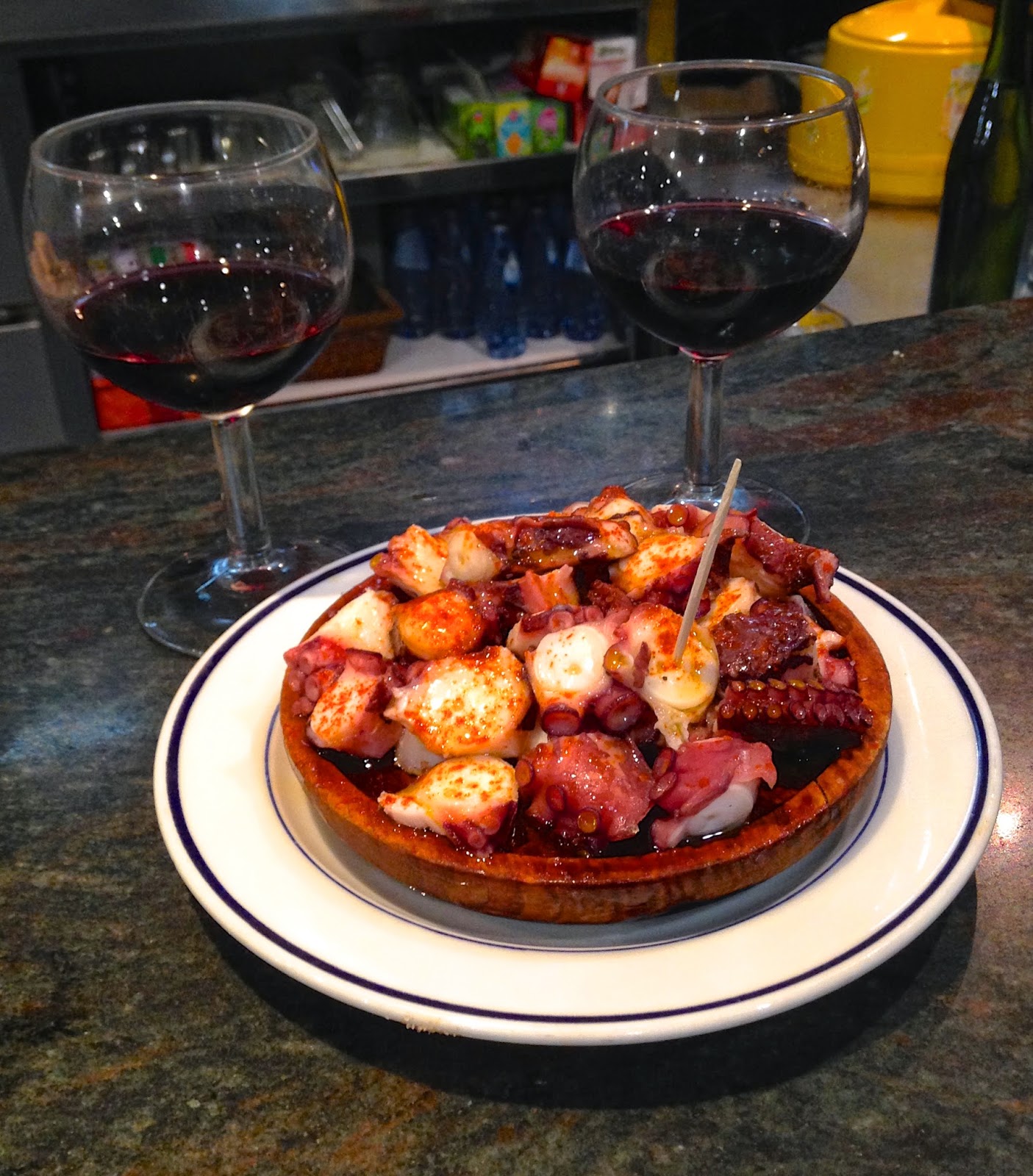 When we got back to my friend's village, it was tapas time. Except our tapa of pulpo was nowhere near enough to satisfy my octopus craving, so we decided to order more. "Una media, o una entera?" my friend asked me. Ha! As if there were any doubt in my mind. We gobbled up our entire ración in less than ten minutes. Soooo good. 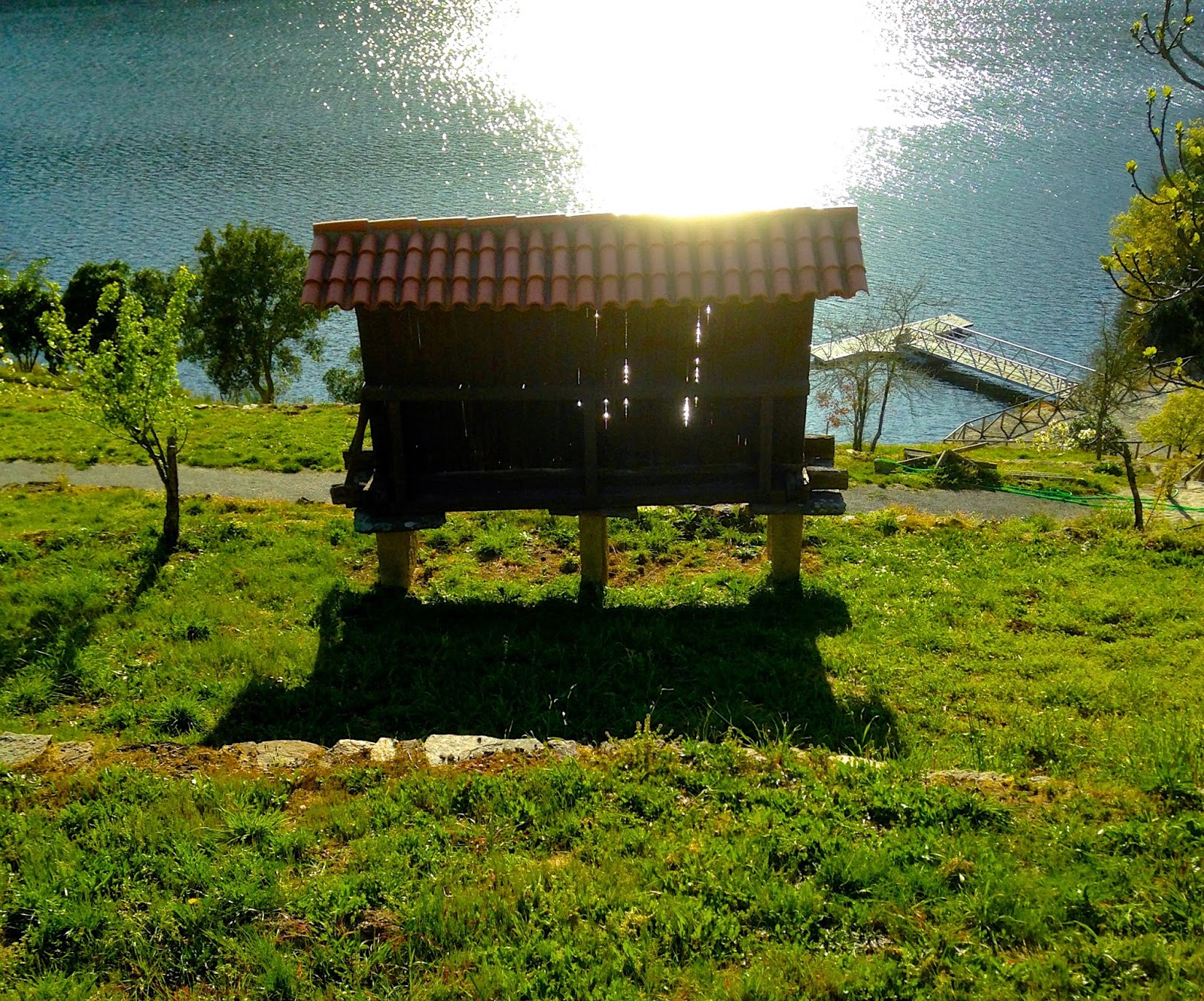 The next day, after my first filling Galician meal, being urged by mothers, aunts, and grandmothers to eat máis, máis (more, more!) fish and soup for several hours, we headed off to Os Cañones do Sil (the Sil Canyons). I'd visited them before, in autumn a few years ago, and while the colors were less brilliant this time around, I still loved looking at the vineyards built into the hillsides. 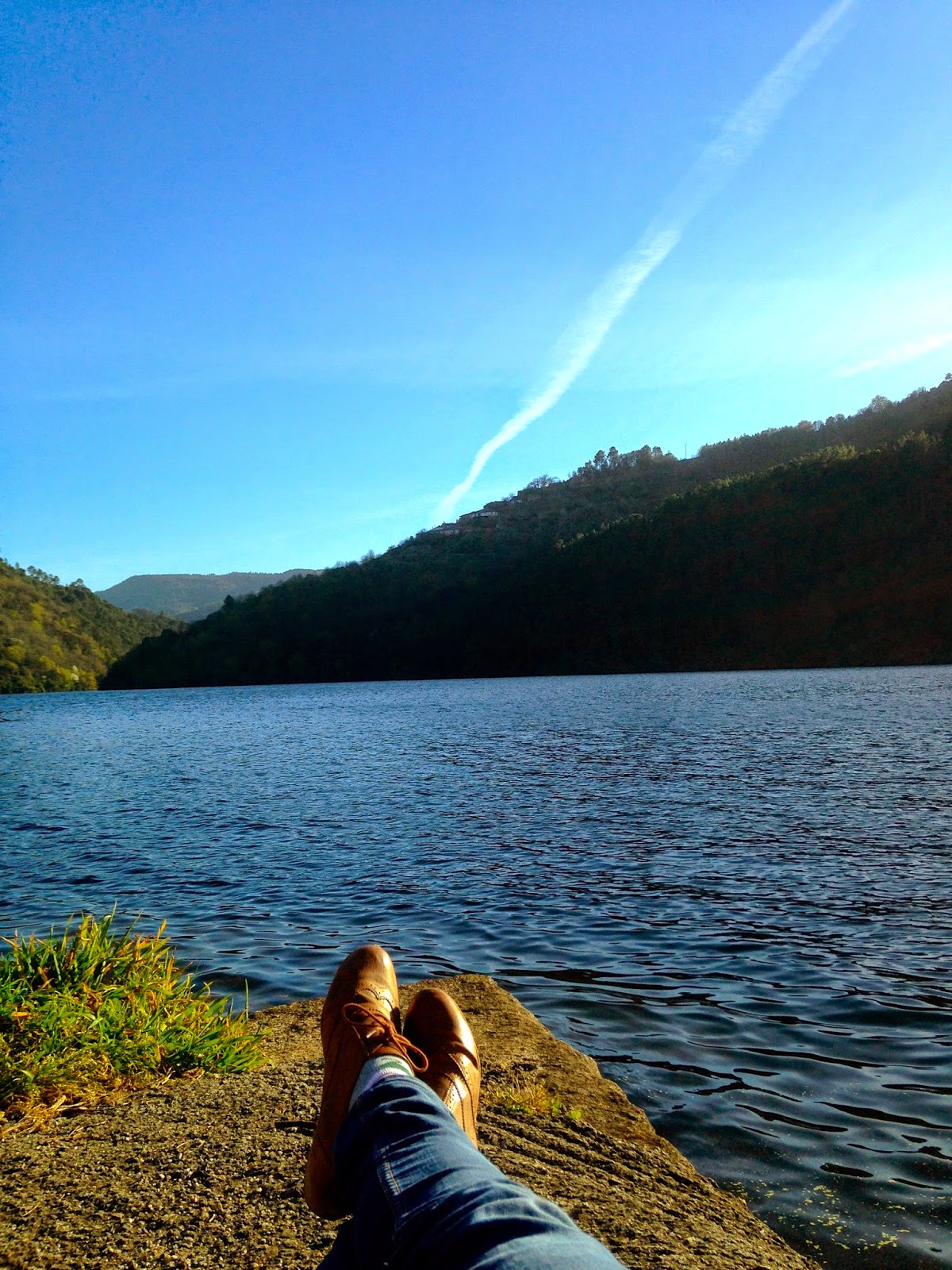 While the others took a dip in the river, I lay back and relaxed, softly humming "Sittin' on the Dock of the Bay" (by Otis Redding) to myself. Sometimes certain songs just FIT specific moments of your life, and for me right now, that one is it. 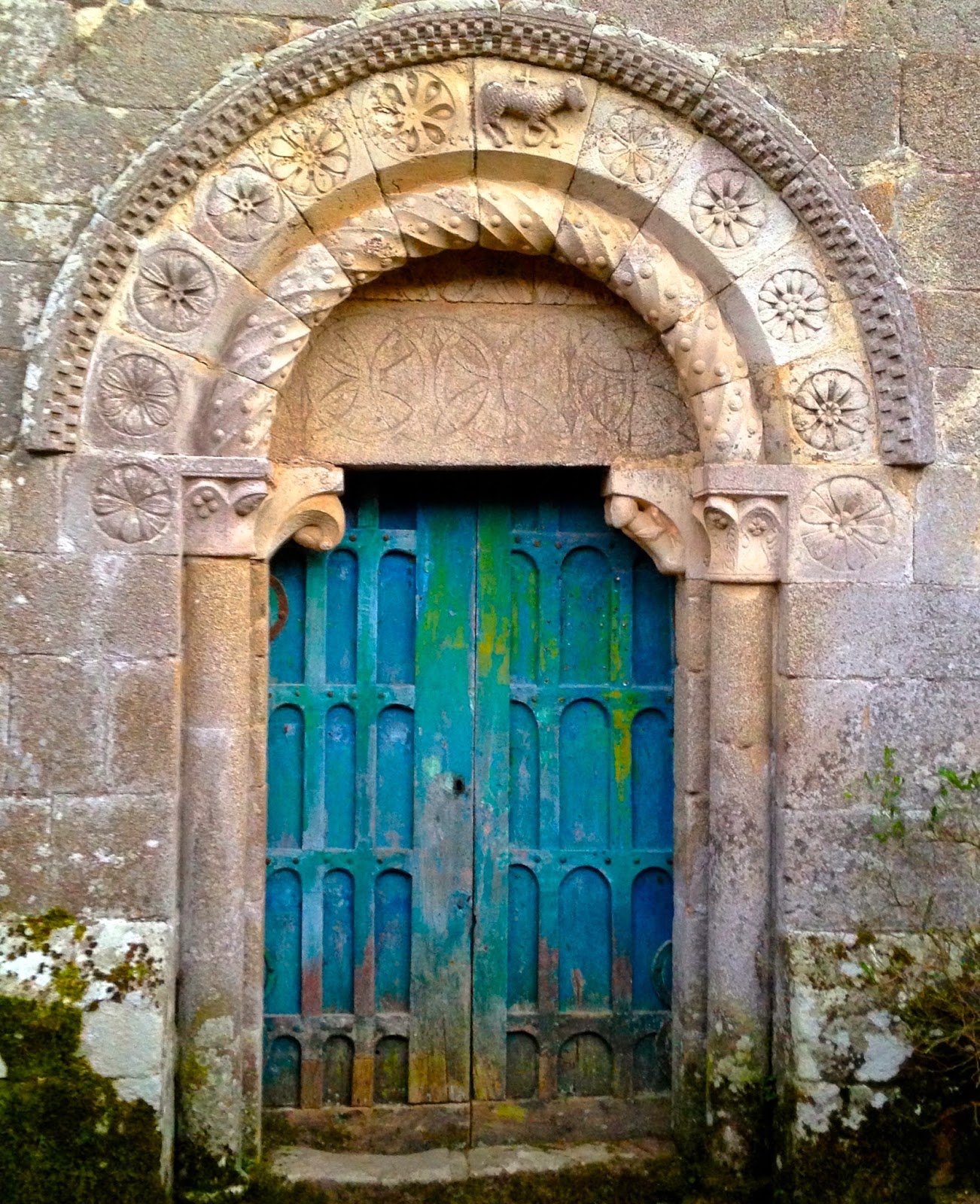 In the next few days, we traversed Galicia diagonally, heading mostly through areas that were unknown to me, visiting things on a whim, in typical road trip fashion. 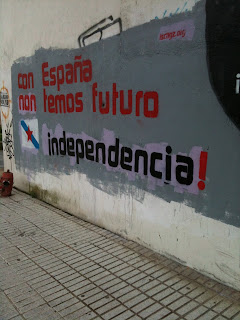 Sometimes, when you have no particular destination in mind, you run into interesting things, like this graffiti by Gallegos who want independence from the rest of Spain. 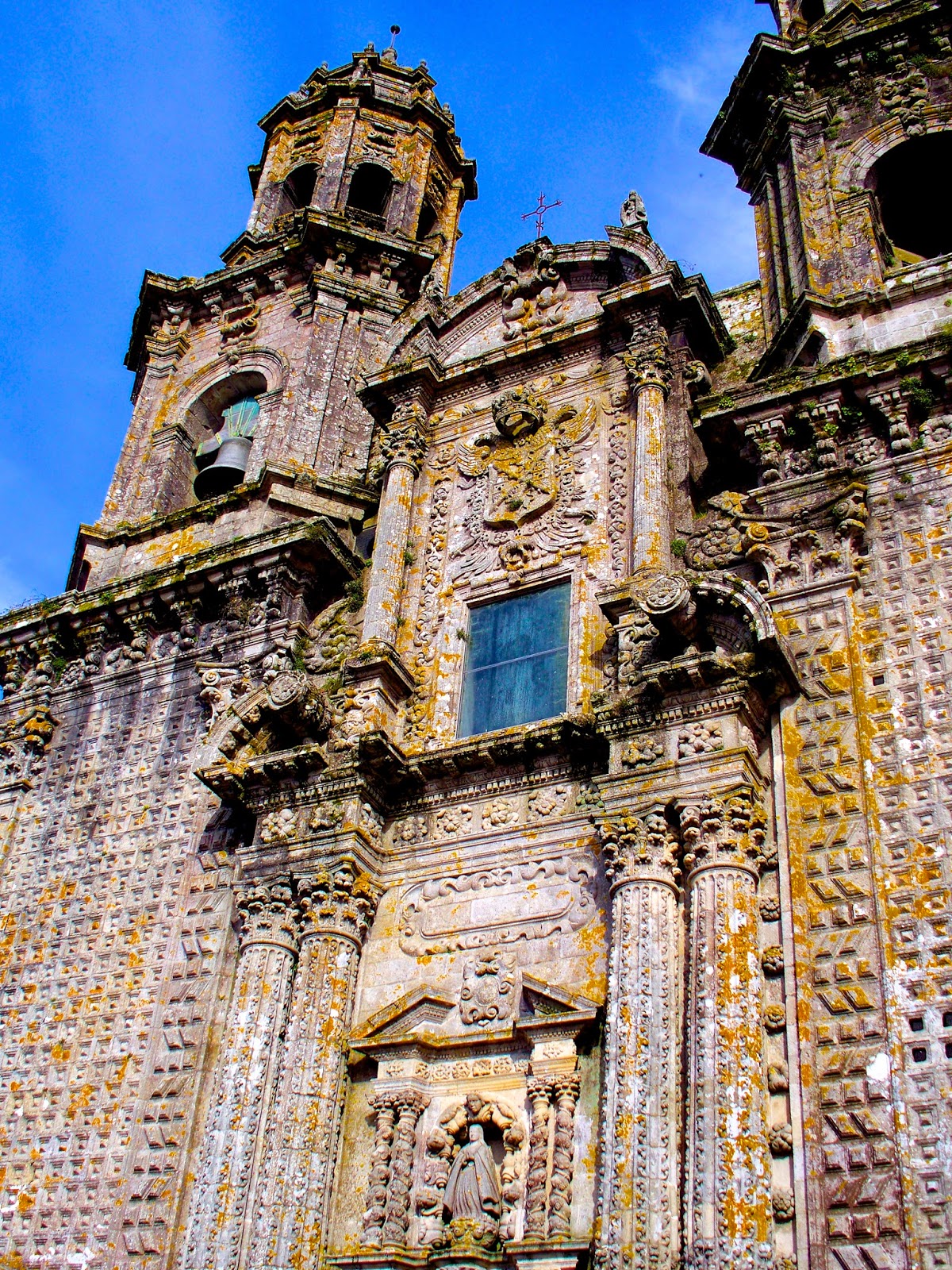 One of our detours was to Sobrado dos Monxes (an apparently famous monastery on the Camino de Santiago), which had one of the most beautiful façades I've ever seen. The details worked into the stone were just astounding, and I can't imagine how much time and effort that must have taken! 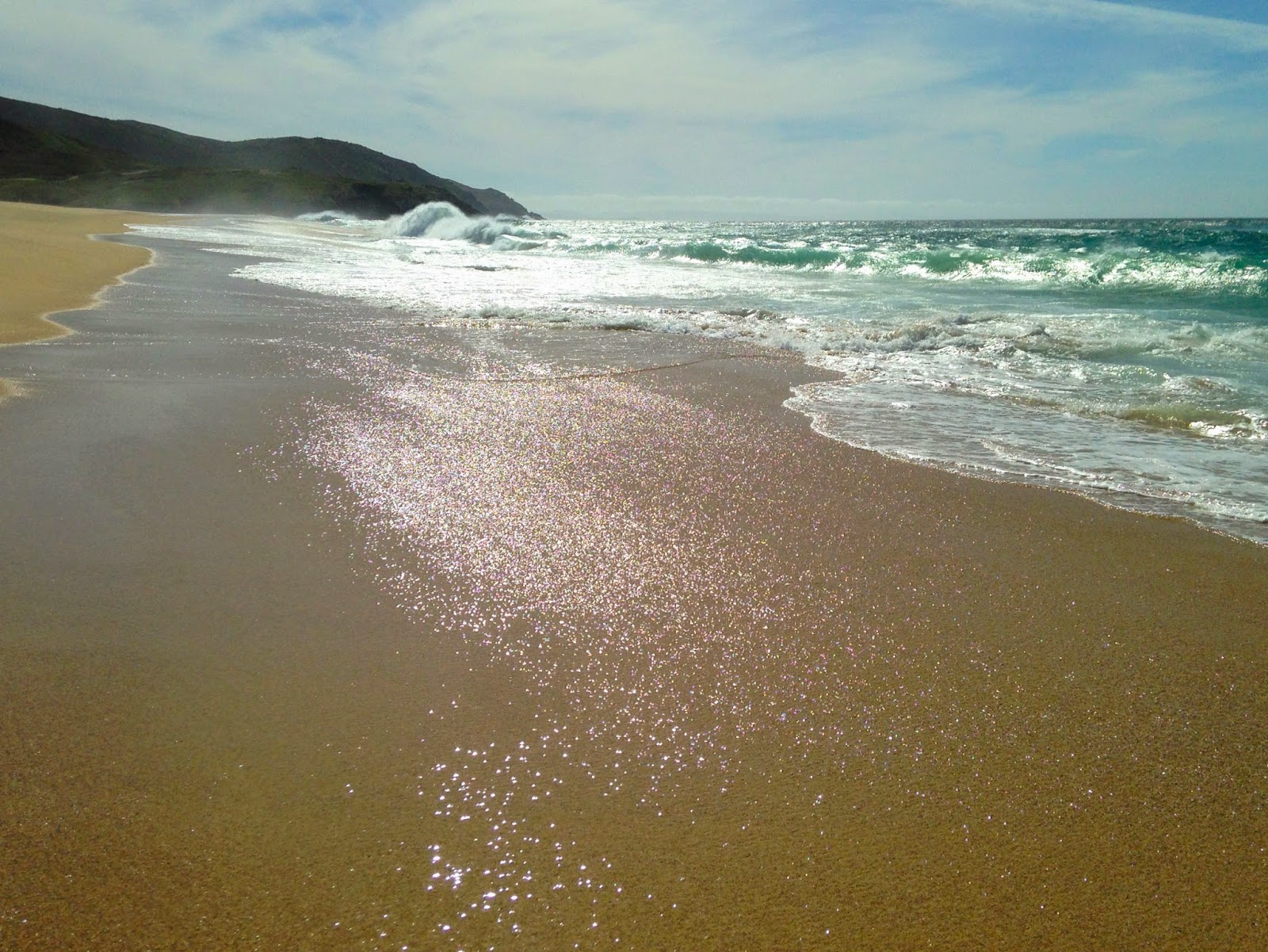 Finally, on the fourth day of our trip, I got to see the ocean again! Despite not having grown up near it, I'd lived near the ocean since 2007, up until this year, and my time in the desert in Alcalá has made me yearn for it. Something about the sound of the waves and the infiniteness of the water stretching out beyond the horizon tugs at my heartstrings. Maybe it's knowing that my family is on the other side of that ocean. Maybe it's the endless possibilities of places I could get to over that sea. Maybe it's the impossible numbers of creatures living in the water. Maybe it's how mysterious and unknown so much of the ocean is. Whatever it may be, I feel a pull towards the sea, so I felt good being near it again. 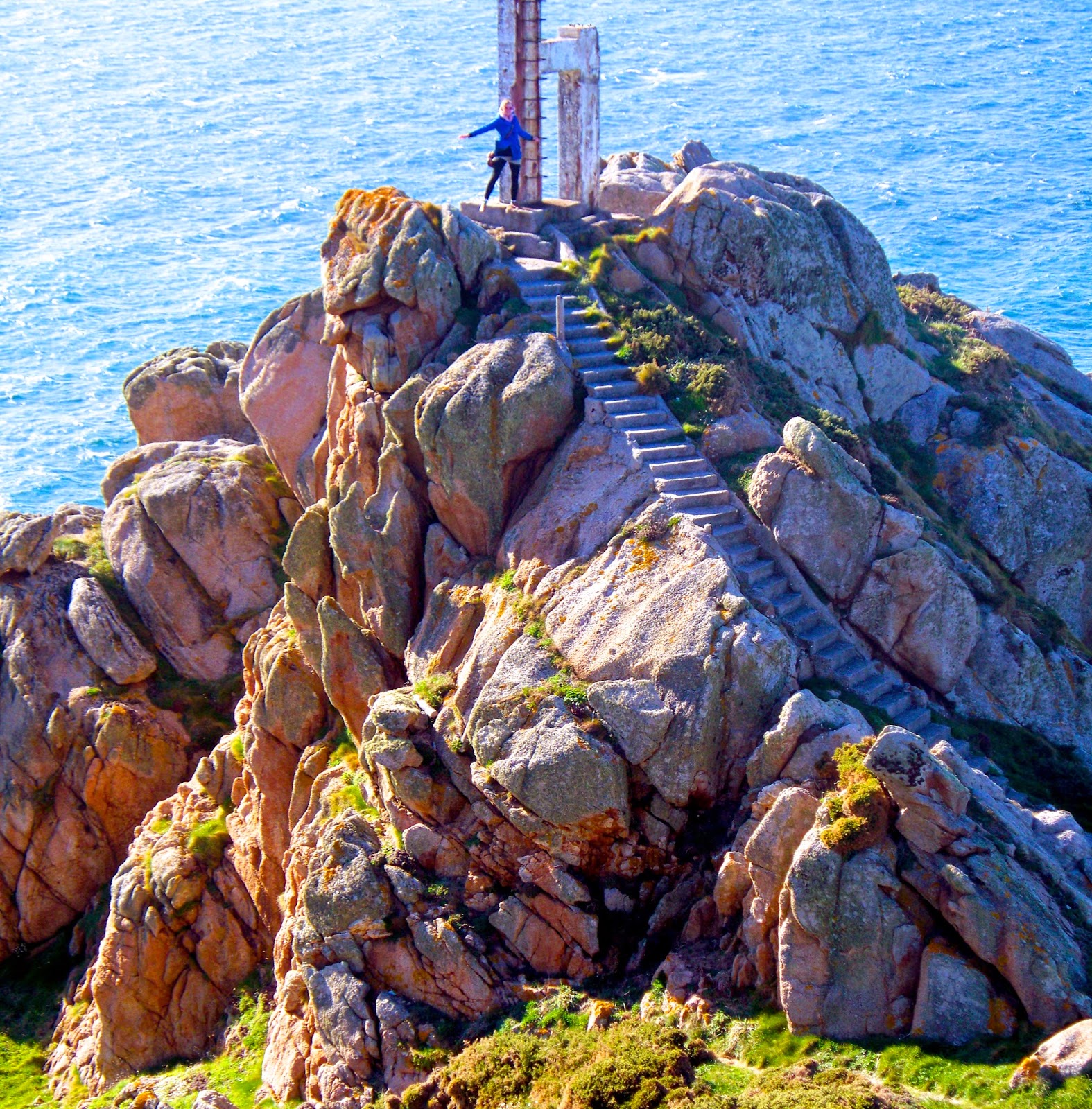 We walked down to this little spot on the coast, and I crawled up those stairs on my hands and knees (yes, vertigo) to get to this point. I immediately grabbed the ladder for dear life, as the wind threatened to blow me off my feet and into the waves crashing below. Terrified? Just a bit. 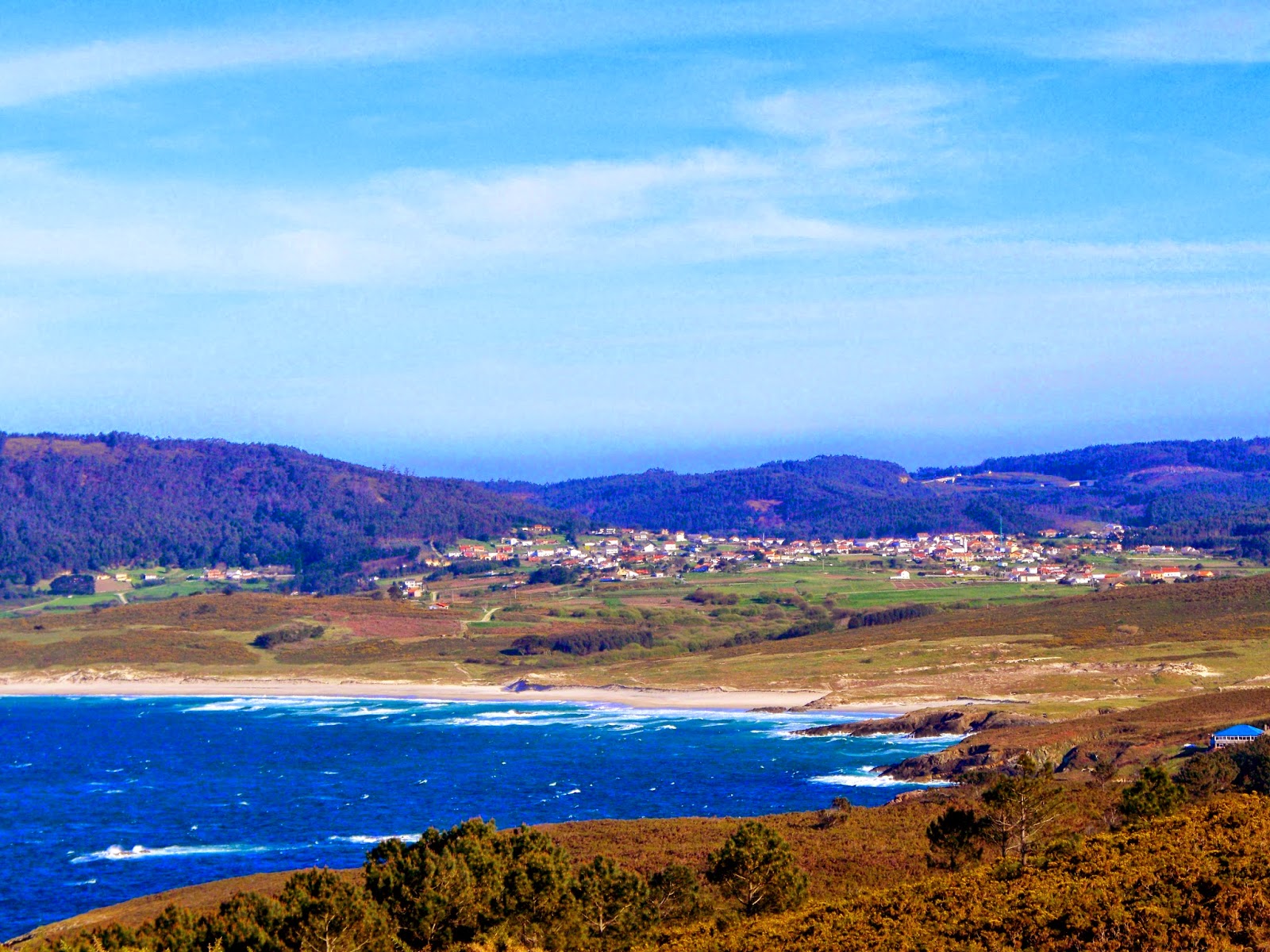 I feel like these pictures speak for themselves. What more could you wish for in life than a place like Galicia? It has crystal blue waters, lush green hillsides, blooming flowers, the nicest people you will ever meet, delicious and abundant and cheap food and it is relatively undiscovered by foreign tourists! Ain't nothing better than that. 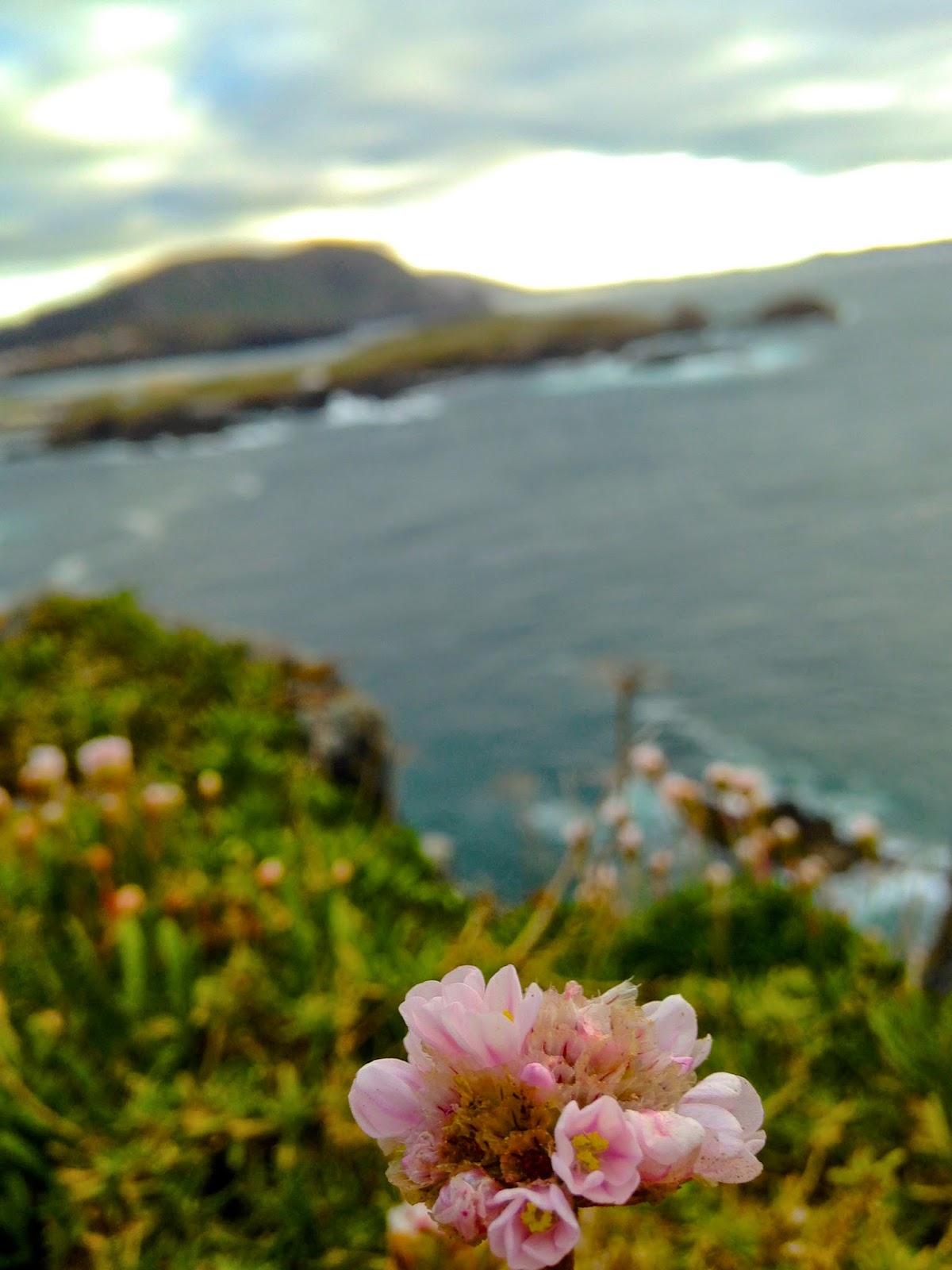 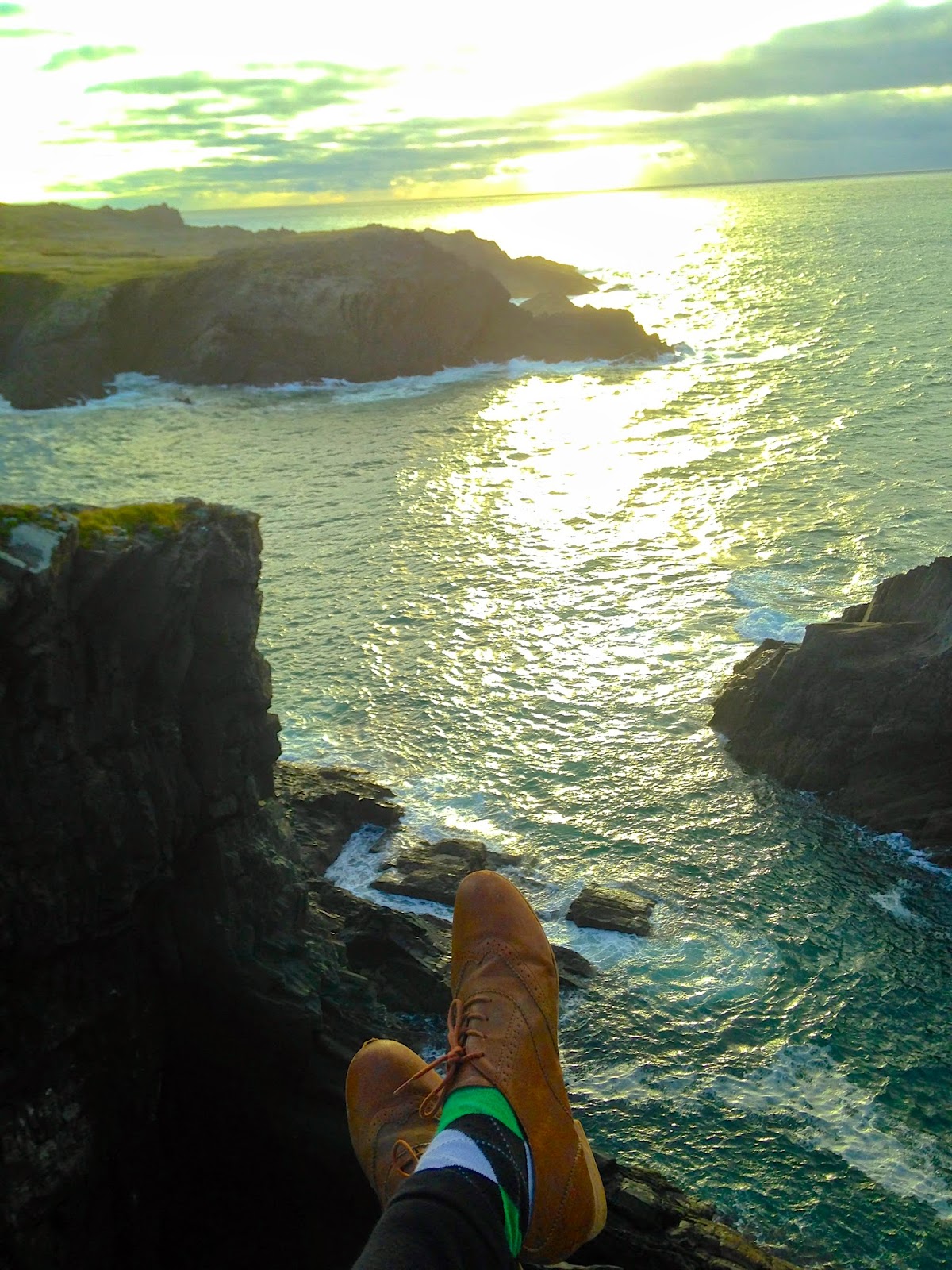 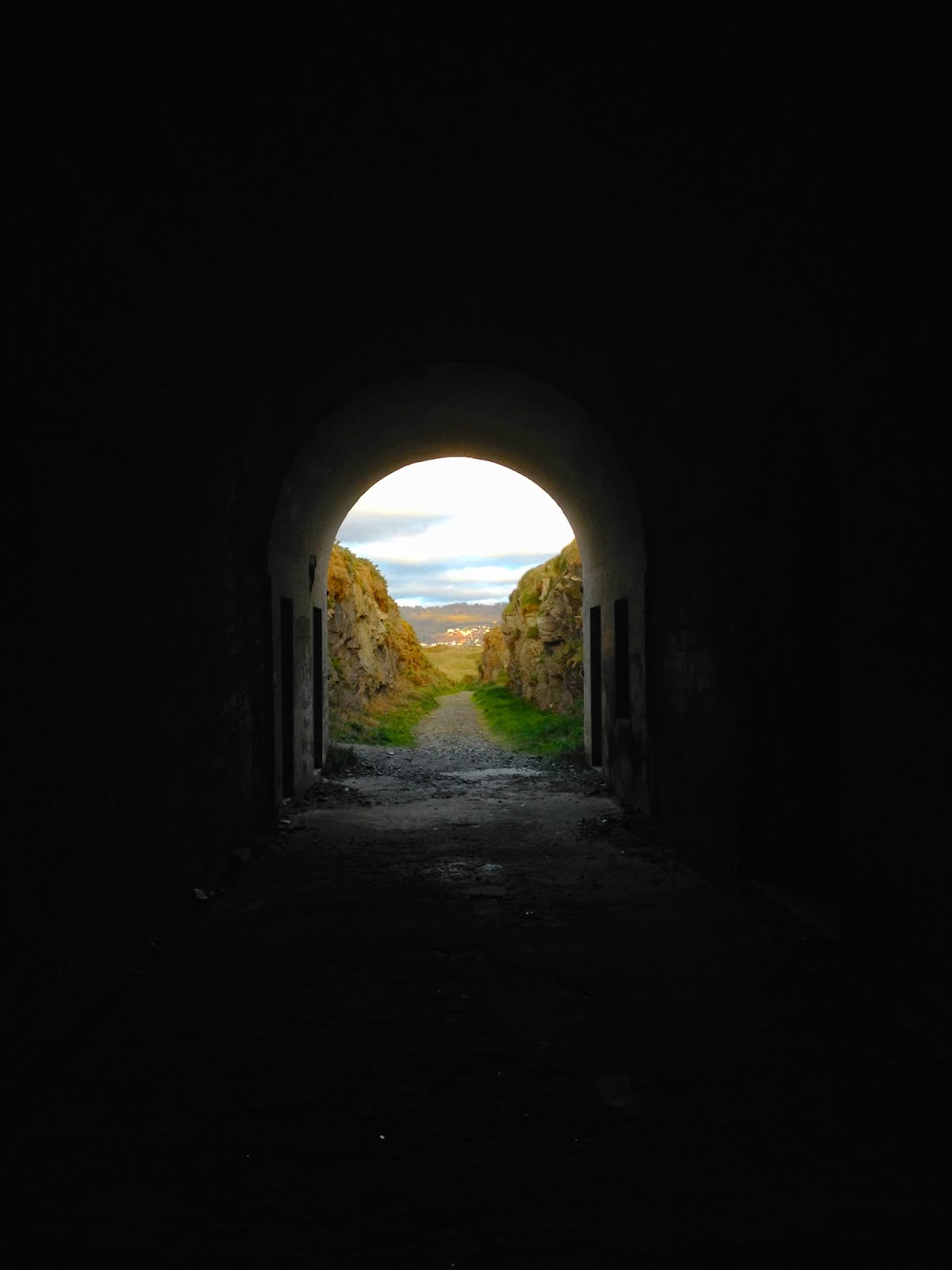 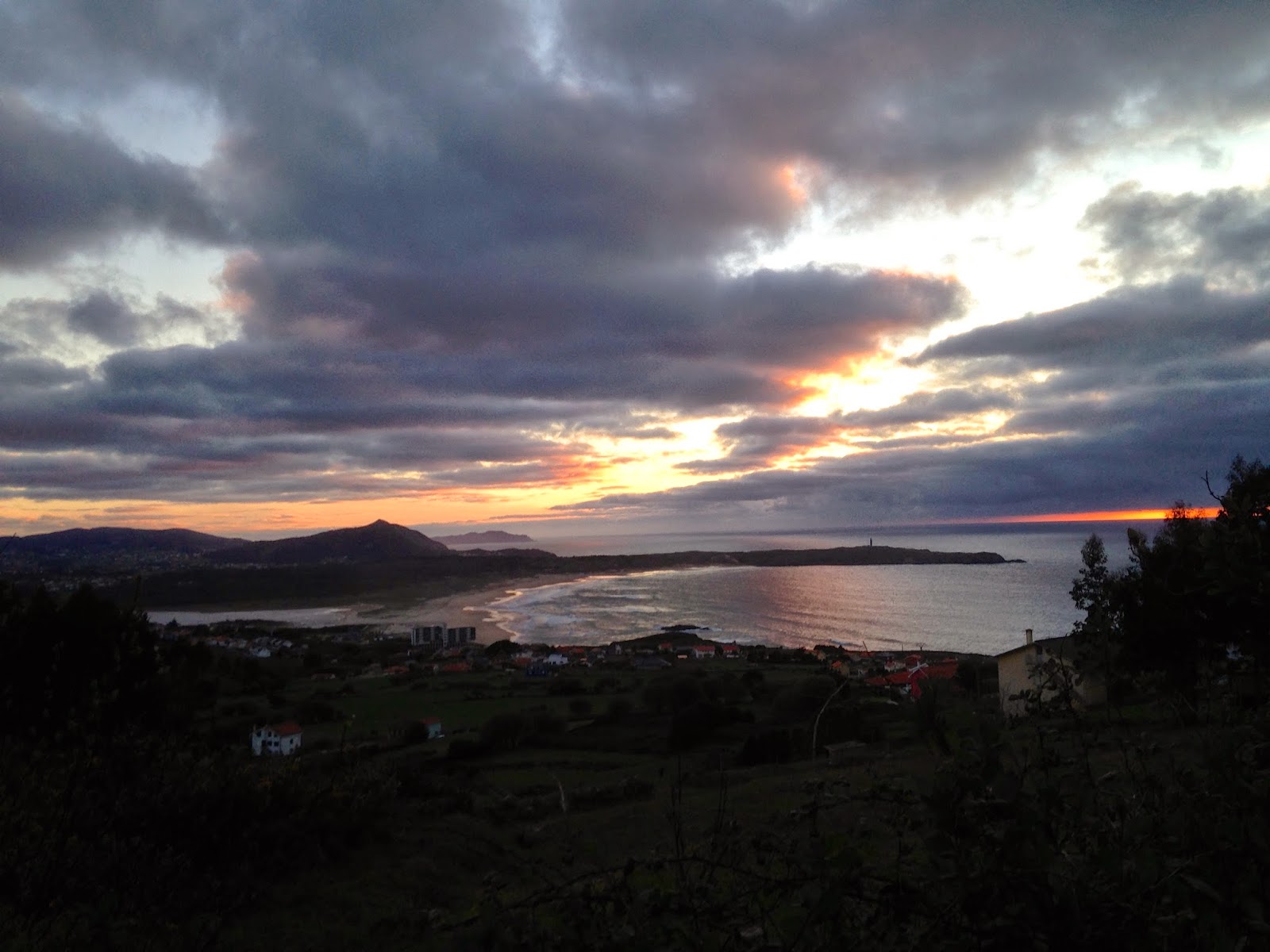 By the end of that day, all of my deep feelings for Galicia had come rushing back. There's a special word for the deep longing Galicians feel when they live away from the province and miss it. It's called morriña. Once again, my gallegos are going to laugh at me, but I genuinely think this is what I've been feeling. The rest of Spain just doesn't measure up to my beloved Galicia, it can't! I've gushed on and on before about my love for this corner of Spain, and that may never go away. 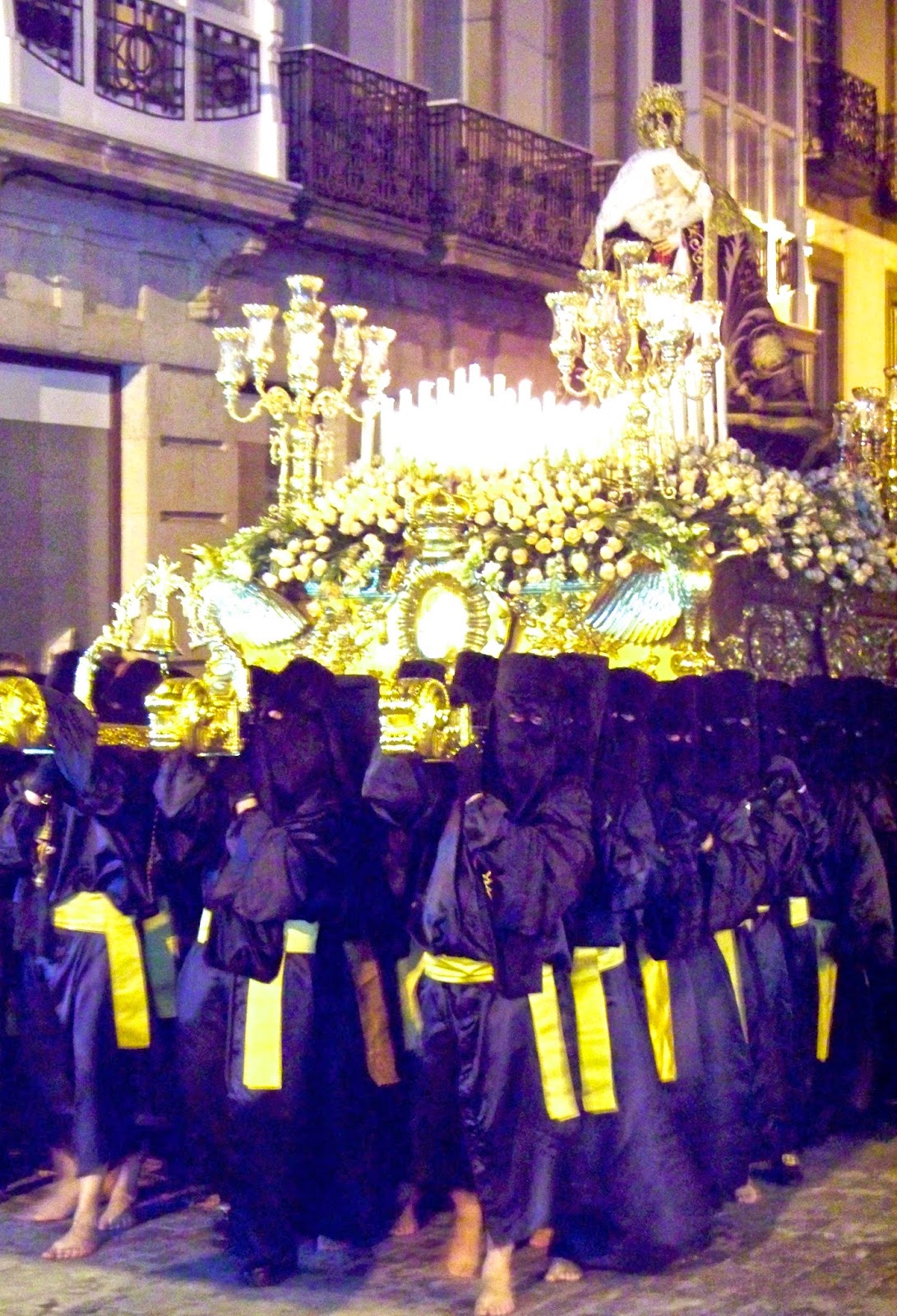 I was excited to get to do one new thing this time around in Galicia. Since I'd never before stayed in Spain during Easter, I'd never gotten to see its famous processions. While these aren't generally as big of a thing in Galicia as in the south (say, Sevilla), in Ferrol they have some pretty famous ones, and I got to check them out. I was particularly impressed by the barefoot carriers of the Virgin. 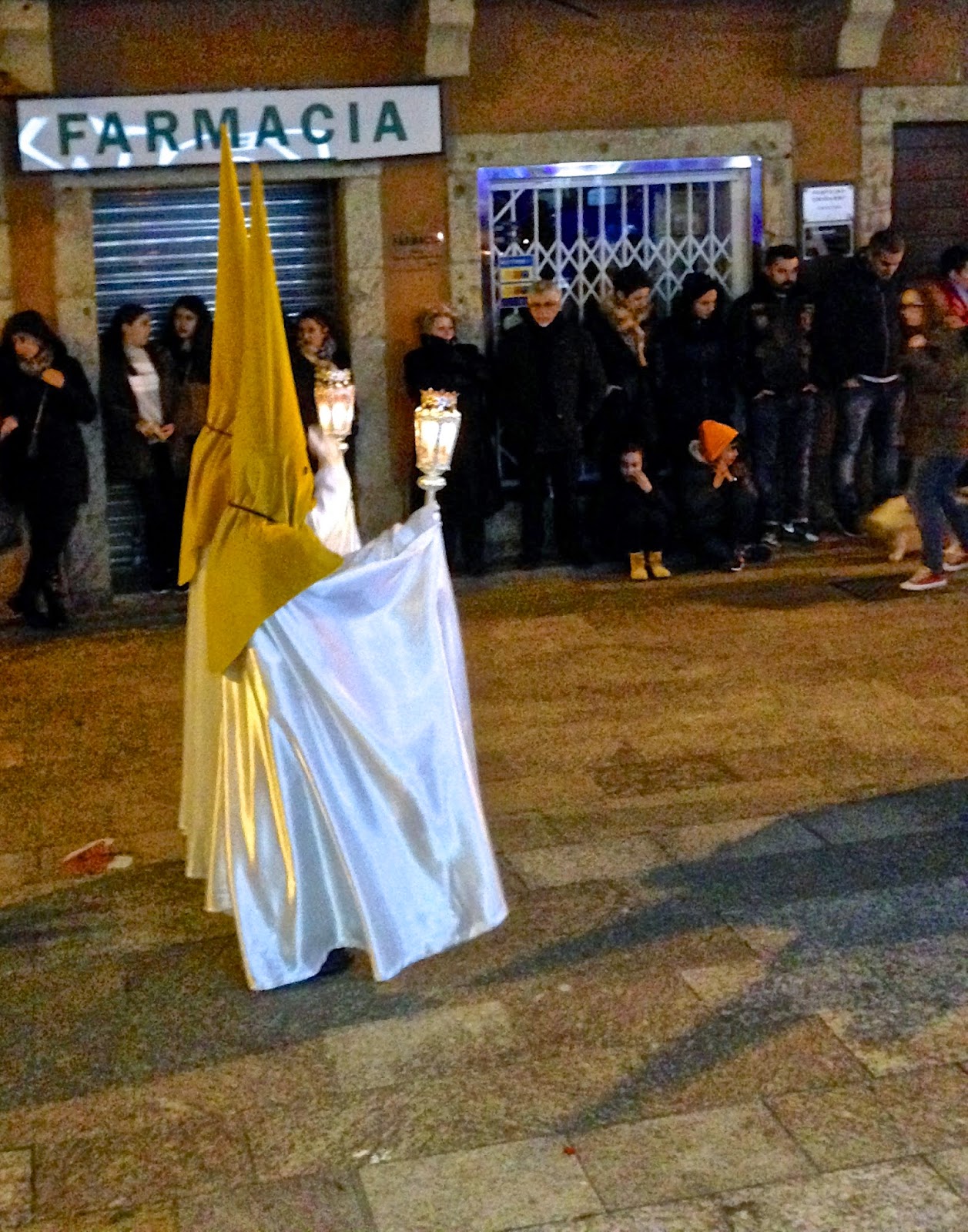 And, stereotypical American, I felt shocked by the men dressed in outfits that looked like they came from a KKK meeting. 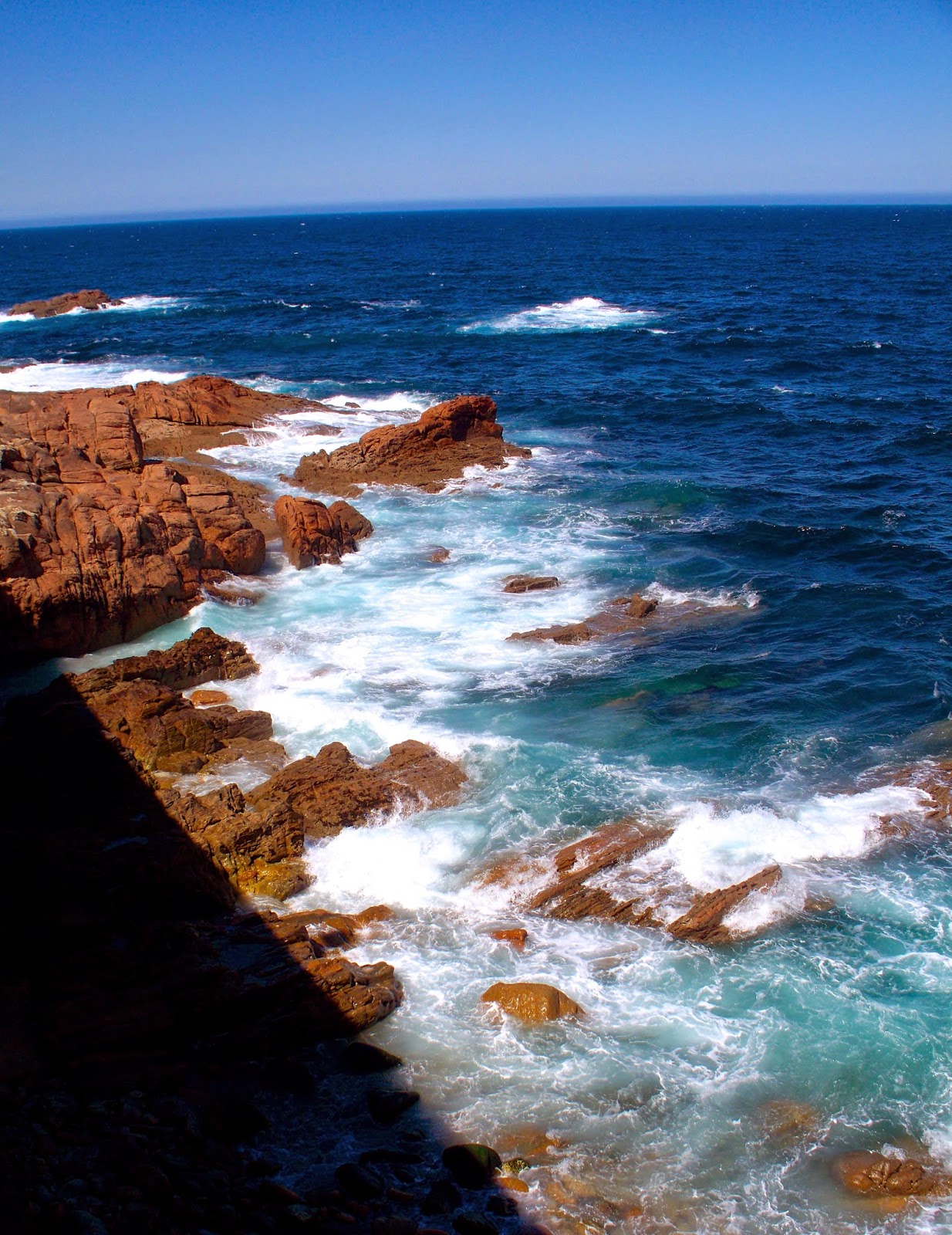 I only had a little more time to soak in all the oceany goodness that I could, so I spent it wandering along beaches as much as possible. Gee, I wonder why they call this part of A Coruña a costa da morte (the coast of death)?? 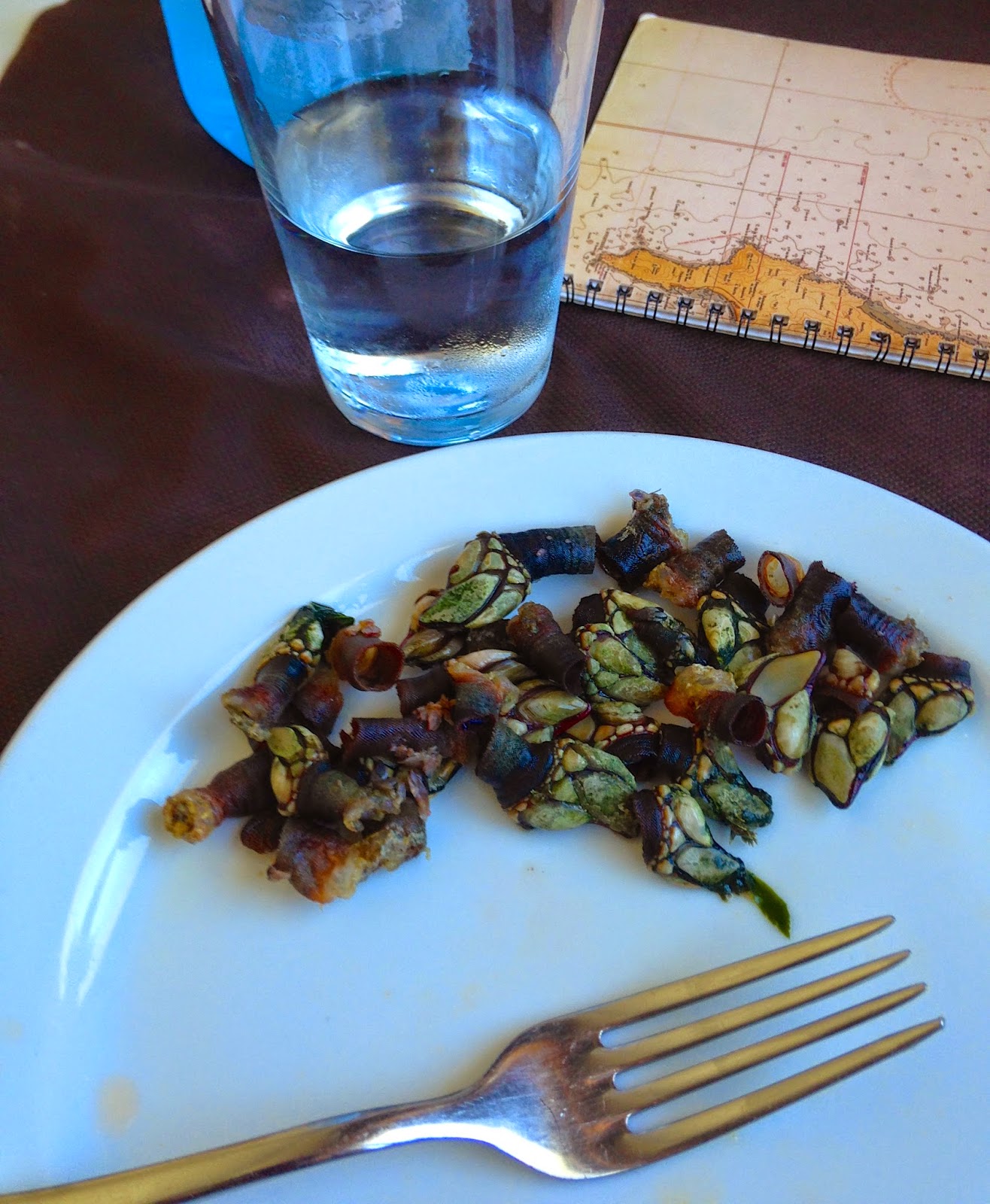 I told my friends I planned on gaining 10 pounds of delicious Galician cooking during this trip, and I was not disappointed. Calamares, pimientos de padron, pulpo, caldo gallego, licor café, and so many other things. My Easter lunch consisted of goose barnacles and albariño with my friend's abuelos, and I could not have been happier about it! 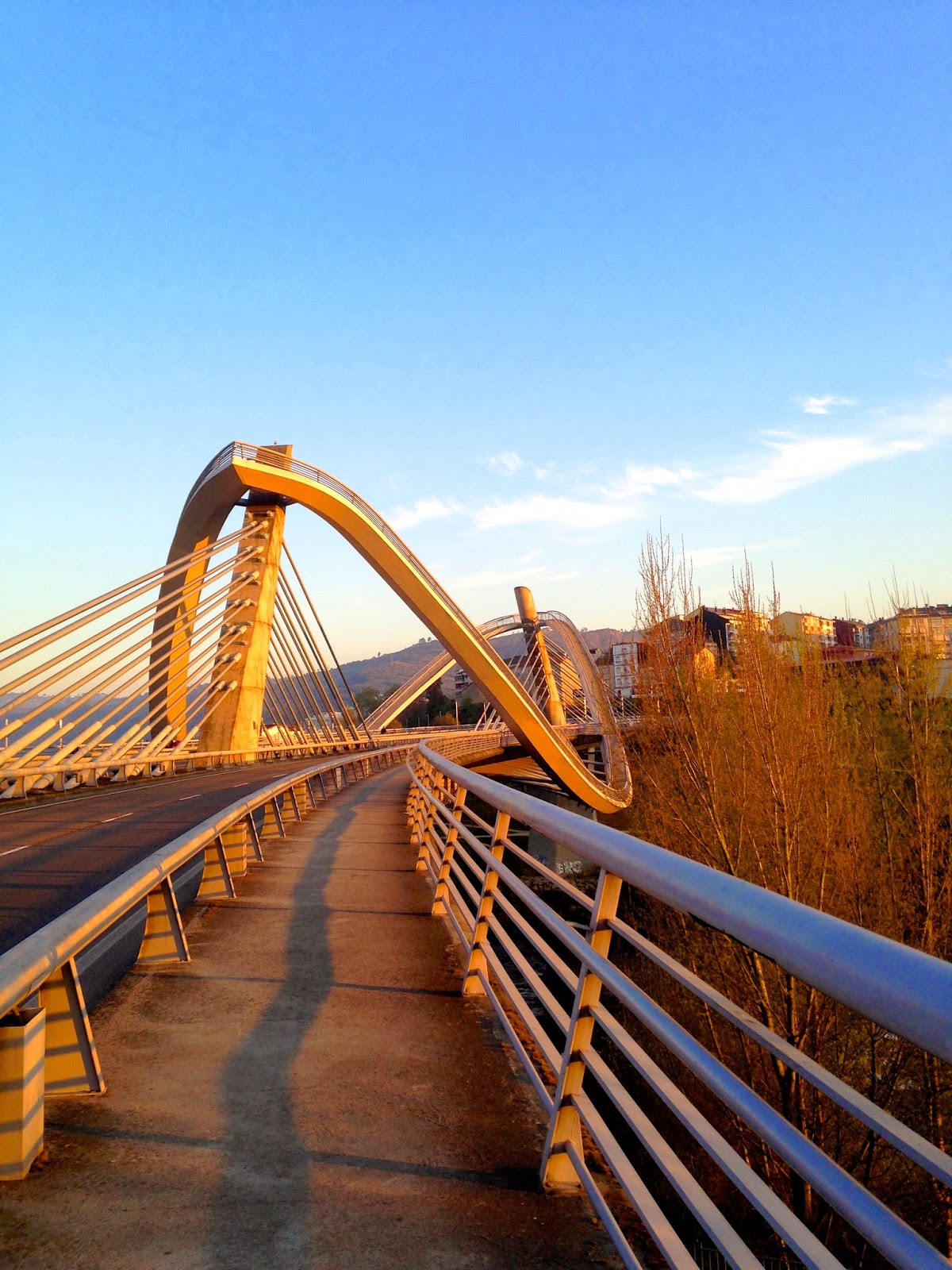 Just before catching my Blablacar back to Madrid, I finally got to do one of those things that you intend to do for years while you live near a place, but never find a good moment for. There's this weird bridge in Ourense that I'd always meant to climb up and get a picture of, but I never did, so I was happy to finally get a chance during this trip!

Overall, my spring break voyage back to Galicia was just what I needed to feel rested and refreshed after a difficult few months. I'll probably never get over my morriña, wishing I could move back to Vigo, but as much as I might love it there, I have to accept that that ship has sailed, and it's time to move on to greener pastures...and perhaps come back to visit as often as my wallet allows me to!
Posted by Alisa at 10:52 PM