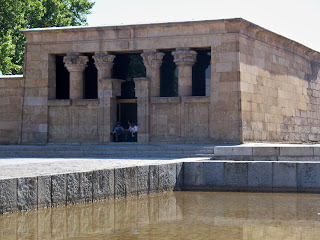 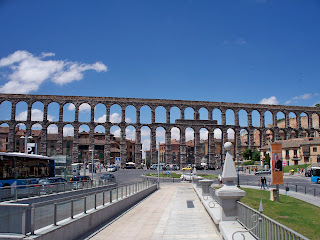 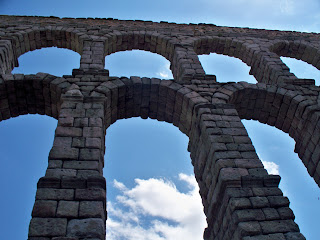 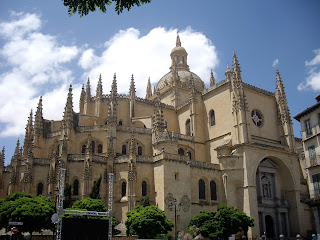 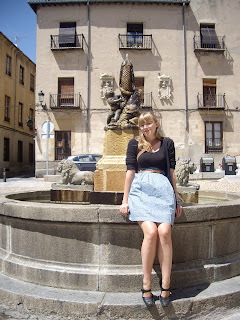 This is the second summer I've spent in Spain, and I keep noticing things that are particular to the season that are very different from the way we do things in the US.

One example I noticed at the pool in the apartment complex where I'm living for the summer. One girl was trying to learn how to dive in, headfirst, and a whole bunch of people were showing her how. I realized that I have absolutely no idea how to dive headfirst into a swimming pool, and thought about why that might be. I realized that almost every single swimming pool I've ever been to in the US has tons of those signs embedded in the floor with a picture of a person diving and their head hitting the bottom of the pool and lightning bolts coming out of it. 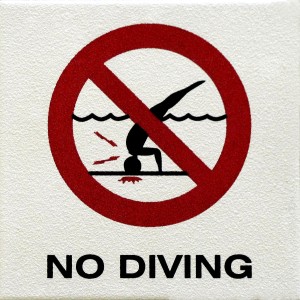 [image from traderdaily.com ...don't ask me what it was doing there!]

But here, nothing of the sort. I've continued my observations, and have seen people continuously diving into the shallow end of the pool (3ft deep or so) and not coming out without any lightning bolts around their heads, or other cartoonish signs of pain. What gives, America? Why are we so cautious about this?

Another thing is sunscreen. I've spent a fair amount of time researching European sunscreen lately, after an incident where I went outside for too long with Spaniards (who burn less easily than a pale thing like me) and returned looking like a lobster.

I was determined after that to get myself some sunscreen, so I went to the chino (it being right around the corner and usually cheaper than any other store) and picked up the only sunscreen they had, which was SPF 4. I thought to myself that this seemed ridiculously low, but figured maybe they measured SPF differently in Europe...after all, they measure everything else differently, why not that? I used it and mostly didn't get burnt, but then asked a work colleague about it and she was shocked and immediately went into overprotective Spanish mother mode, saying "You can't just go around only using SPF 4! People only use that at the end of summer, when they're already very brown! You'll get completely burnt! Go to the pharmacy, that's where the good sunscreen is."

So then I dutifully went to the pharmacy to pick up some real sunscreen. Since in the US, we usually use sunscreens with SPFs of very high numbers, like 70 or 80, I was looking for something like that. But the highest they go here is 50. I was also shocked at the price on the bottles. I ended up getting a small bottle (50 ml, or 1.5 oz) of SPF 40, because it was all I could afford at the time. And that cost me €10.

I later did some research on the different labeling rules because I was wondering why sunscreen here only goes up to SPF 50, and I learned that the EU has stricter laws in order to limit false claims, which the US doesn't have. So that US sunscreen that says SPF 80 might not actually protect your skin better than one that says SPF 50. I also learned that the EU requires sunscreen here to protect against both UVA and UVB rays, whereas US sunscreen only legally has to protect against UVB rays (UVB rays are the ones that burn you, but UVA rays can give you cancer). Thus why European sunscreen is so much more expensive--it protects you better, and it's actually labeled correctly!

In the future, despite the expense, I'm only going to buy European sunscreen, if I can help it. Once again I have to ask, what gives, America? Get your act together, sunscreen-wise! 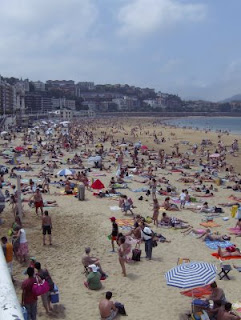 Now I know why all these people aren't worried about being exposed to the sun: their secret weapon, superior sunscreen!

The final observation I have (for now) on summer in Spain is something that I'll probably never get over, no matter how long I try to get US cultural norms out of my head. Why do Spanish kids wear either no swimsuit at all or only half of one?? I understand that we're puritanical in the US and that little girls don't really need a tiny bikini top when their chest looks no different from a little boy's chest...and that even a grown woman or man doesn't need to be ashamed of their body, that anyone can go swimming nude if they want to. But the little naked or half-clothed swimmers will never stop looking weird to me. And I will never be entirely comfortable on a nude beach, despite trying to seem "cool" with it. Some aspects of your native culture never leave you, and for me, this is one of them. I will probably always be slightly more ashamed of and awkward around the naked human body in public than Europeans are. Thanks for that one too, America.

What other summertime things does Spain do differently? Are you as awkward on a nude beach as I am? Have you, too, been foiled by confusing sunscreen labels? Tell me about it!
Posted by Alisa at 3:49 PM No comments: