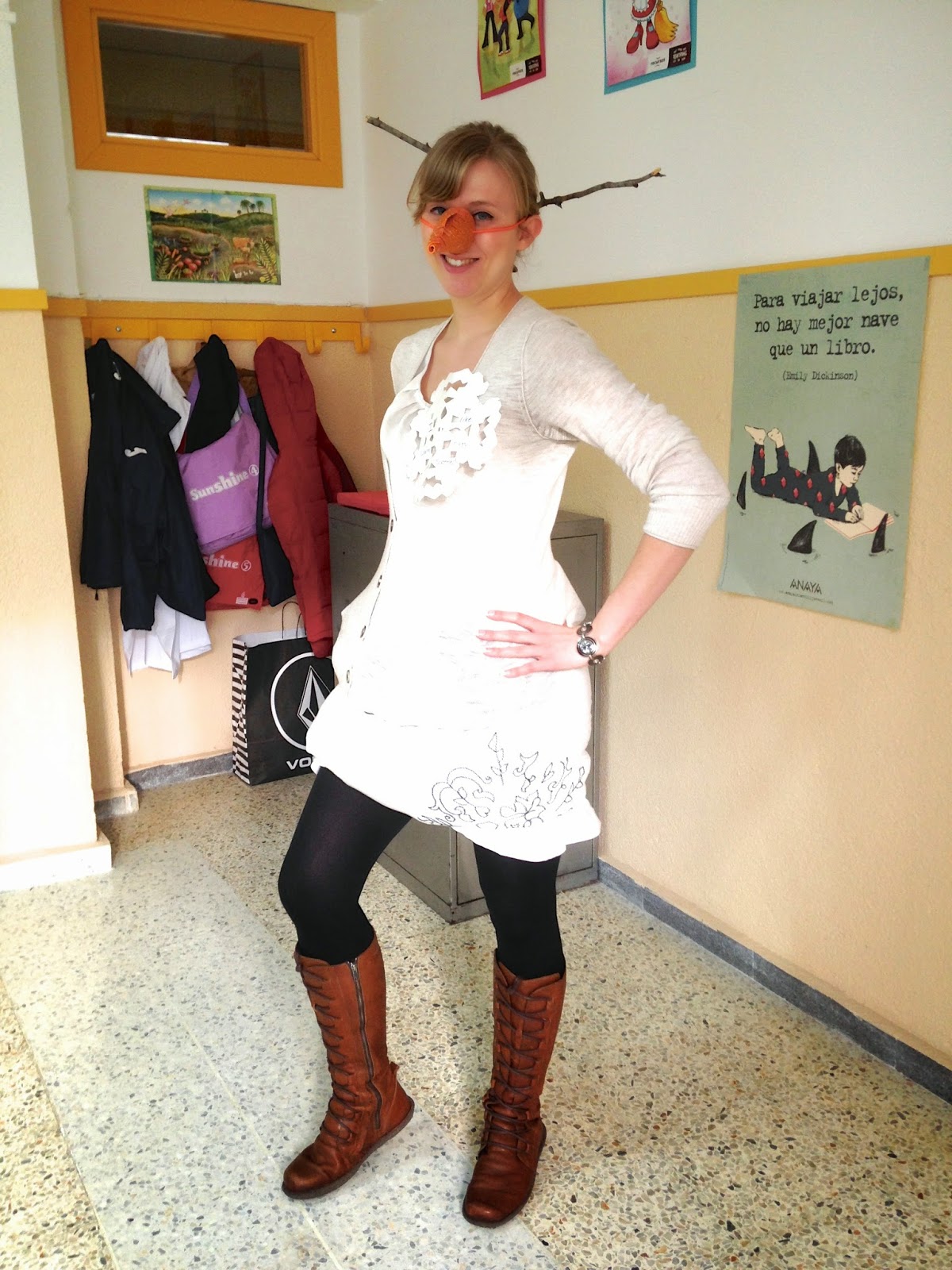 How NOT to Visit Iceland's Blue Lagoon: An Embarrassing Story 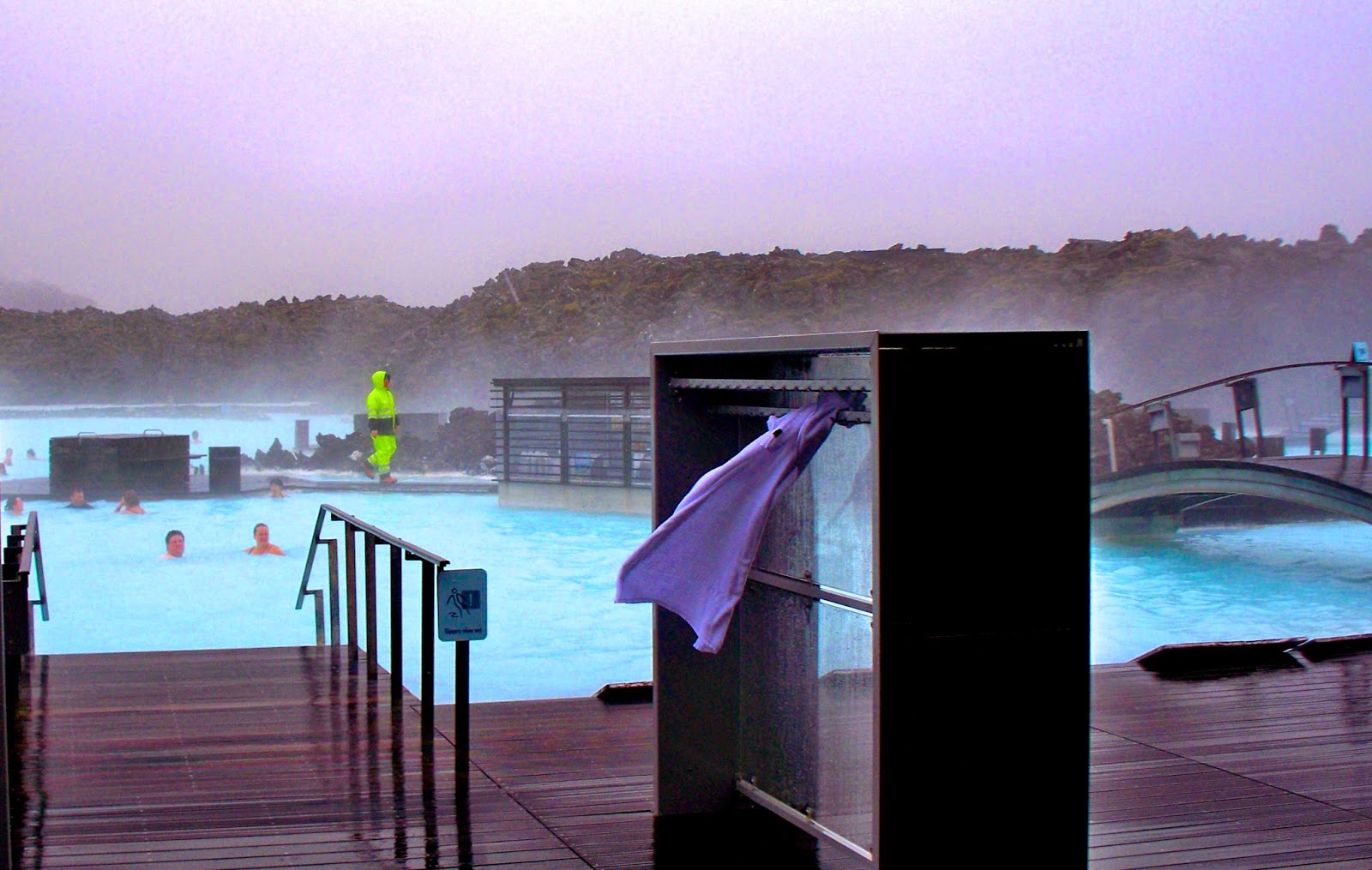 About a year and a half ago, in September 2013, when I was moving from a summer at my parents' house to teach in St. Malo, France, I decided to take advantage of Icelandair's awesome low prices ($300 for a one-way ticket!), great location (they fly from Minneapolis-St. Paul, where I have family, saving me the hassle of O'Hare), and neat free 7-day layover scheme.

I didn't have the time or money at that moment to take advantage of a full seven days, but I wanted to see Iceland, even if only briefly, and so I managed to squeeze in a two-day stay before I had to jet off to my new life in France.

Since the flight from Minneapolis to Reykjavik is only about five hours (it IS in the middle of the Atlantic Ocean, after all), I flew out at about 6pm Central Time and landed at 5am Greenwich Mean Time. It was one of those stupid travel moves that you think sounds like a good idea when it's on your computer screen, but in actuality it is not at all fun. Sleeping on the airplane is hard enough when you have around 9 hours to do it, but in only 5 hours, it felt like I had just closed my eyes when they announced that we would be arriving shortly.

"No problem," I thought, "I have no problem sleeping in airports; I've done it a million times before!"

But not in Iceland, I hadn't!

It turns out that there are signs all over Reykjavik (Keflavík) airport warning you not to sleep. This is the type of thing I usually ignore, and I did try, but airport officials kept coming around to make sure that all us poor groggy souls slumped in the chairs in the airport lounge at 5am were 100% AWAKE. Thanks, Iceland.

I remained optimistic though, knowing that I had planned ahead and booked myself a trip to the Blue Lagoon on the way to my hostel in downtown Reykjavik. I was sure that a nice hot thermal bath with crystal-blue water would be just the thing to cheer me up from my jetlag.

Of course, I had forgotten to take into account the weather in Iceland at the end of September. As I dashed from the airport to the bus in the lashing rain, dragging my two 50lb suitcases (checked for free on Icelandair, another reason they are awesome!), my heart began to sink. "An outdoor hot spring in the cold, wind, and rain," I thought, "FUN."

At least I was able to check my bags in at the front of the lagoon, avoiding lugging them behind me in the rain down the path that looked like it was on the surface of Mars, lined with giant black igneous rocks, a result of Iceland's volcanic past. 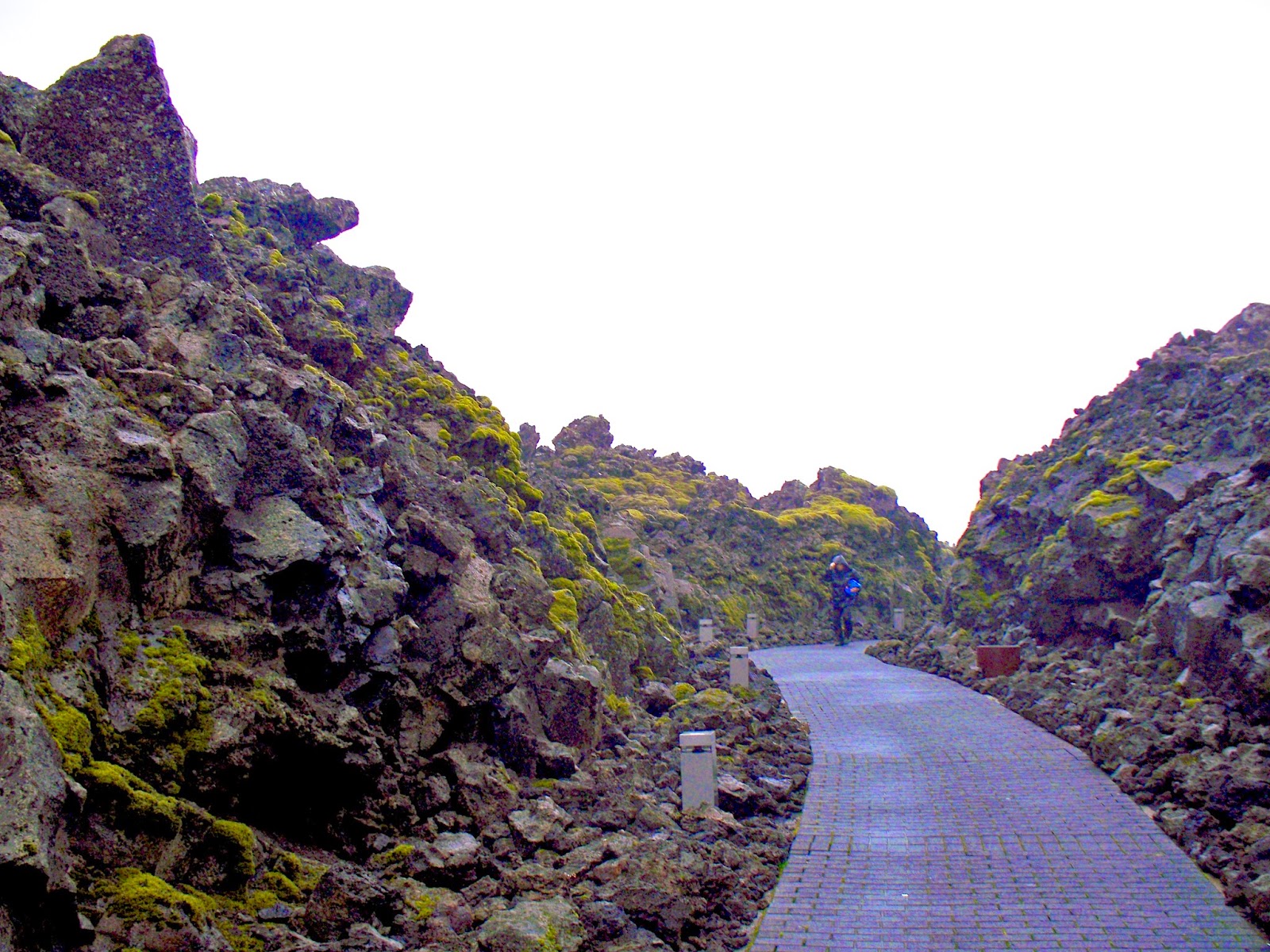 Once I was all paid up, changed, and headed out to the water, though, my thoughts began to change. I began to feel more optimistic about my visit. The warm water would probably make up for the icy wind and unrelenting rain, I thought.

More or less, I was right. No, the water was not uniformly hot, and yes, I did spend the majority of my visit hovering in the warmest spot I could find, shielding my eyes from the rain. And yes, I did make the mistake of putting my head underwater. Let me tell you, washing water filled with minerals out of your long hair is not fun. Really really not.

However, I did start to feel a bit more relaxed after a while in the water. To finish my visit feeling nice and snug, I decided to visit the sauna before heading out. That was lovely, everything that could be expected from a wooden sauna, complete with the smell of the hot timber.

What I failed to take into account was that it was still freezing, windy, and rainy outside, and I was going to have to make the walk from the sauna to the indoors in my wet bathing suit. I mentally prepared myself for a big shock, opened the door, dashed out, and...

Slipped on a wet wooden bridge, accidentally kicked a piece of hardened lava, and went down on my side, hard. TIM-BER. When they say don't run near a pool, they mean it!

Bruised beyond just my pride, I limped inside to survey the damage, hoping no one had noticed my epic fail. My toe was bleeding rather profusely, my hip hurt like the dickens, and I was really embarrassed that I'd just fallen on my face in front of an entire spa full of people.

In the end, I lost a toenail, and got a big welt the width of a(n American) football for my trouble. That sure made walking around Reykjavik the next day more fun!

However, I'll always remember the Blue Lagoon as the location of one of my more embarrassing travel stories to date. Am I glad it happened? No. But is it an amusing story to tell now? Yes, for sure. Would I have such vivid memories of the place if everything had gone smoothly? No way!

So I guess there's always that. Every terrible travel moment brings with it the joy of making people laugh through recounting your embarrassment for years to come.

I'd still like to go back to Iceland and the Blue Lagoon again, by the way, now that I know how NOT to do it. But I think next time I'll check the weather first!

Does anyone else have any embarrassing travel stories to share?
Posted by Alisa at 1:27 AM No comments:

What is it about being out in the fresh air that literally gives you a breath of fresh air? Getting outside is so wonderful for clearing my head, and after having been cooped up writing my thesis so much lately, I needed it! So one day recently, I took a trip with some friends back to El Escorial again, this time not to tour the monastery, but to hike in the mountains nearby.

I'm literally picturing at least one of my sisters giving me the side-eye right now. Somehow, I've gained the reputation for not being outdoorsy, but that isn't at all true, as long as it's not too hot outside and I'm properly attired. And rewarded with coffee and churros afterwards! 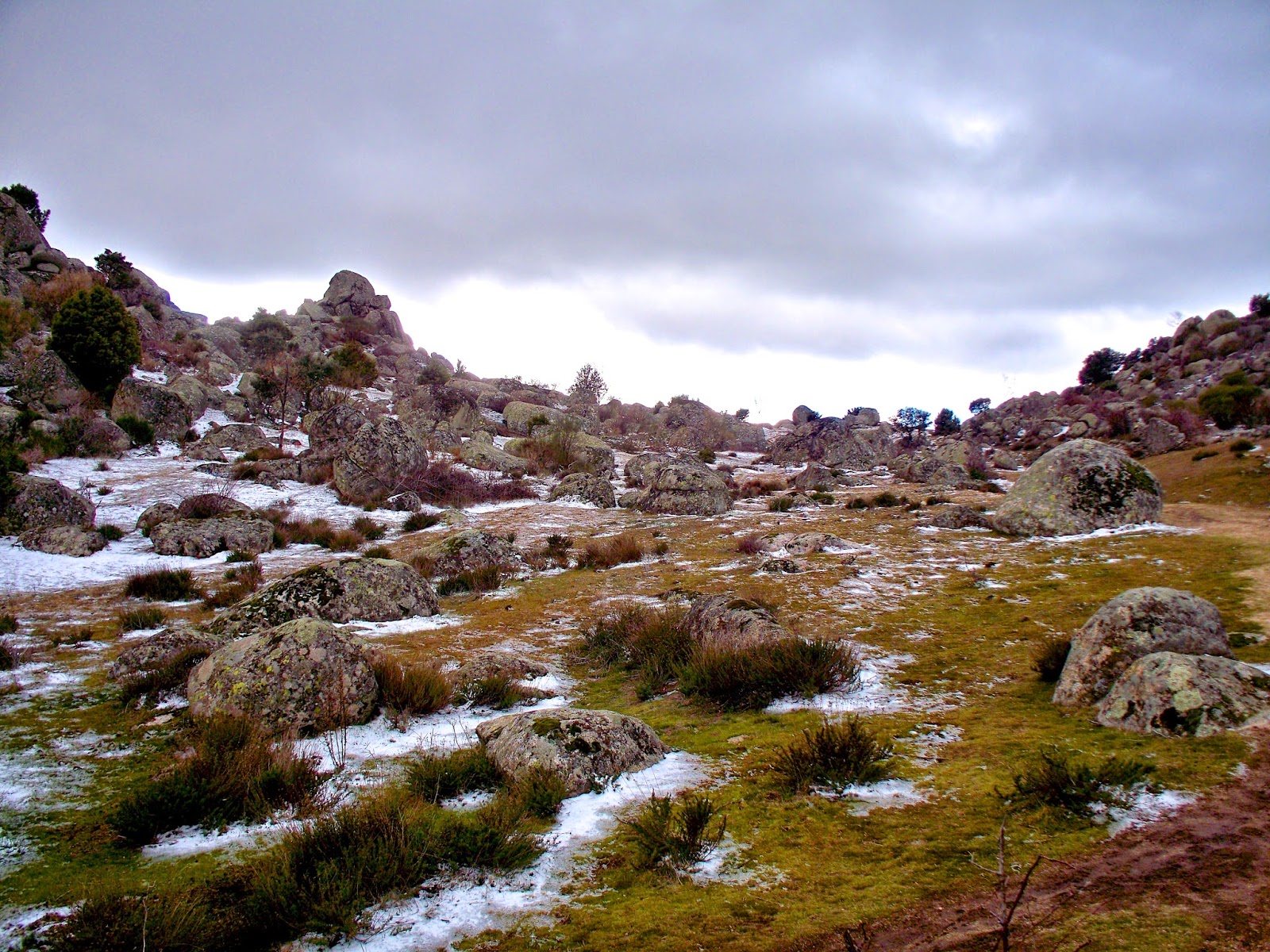 Luckily, on the day we went it was freezing (by Spain standards), with a fierce wind blowing, and there were small patches of snow on our path. My kind of outdoorsy weather! Perfect for doing exercise. I was particularly pleased when tiny flakes of snow began to fall, making the scene just that much more idyllic. 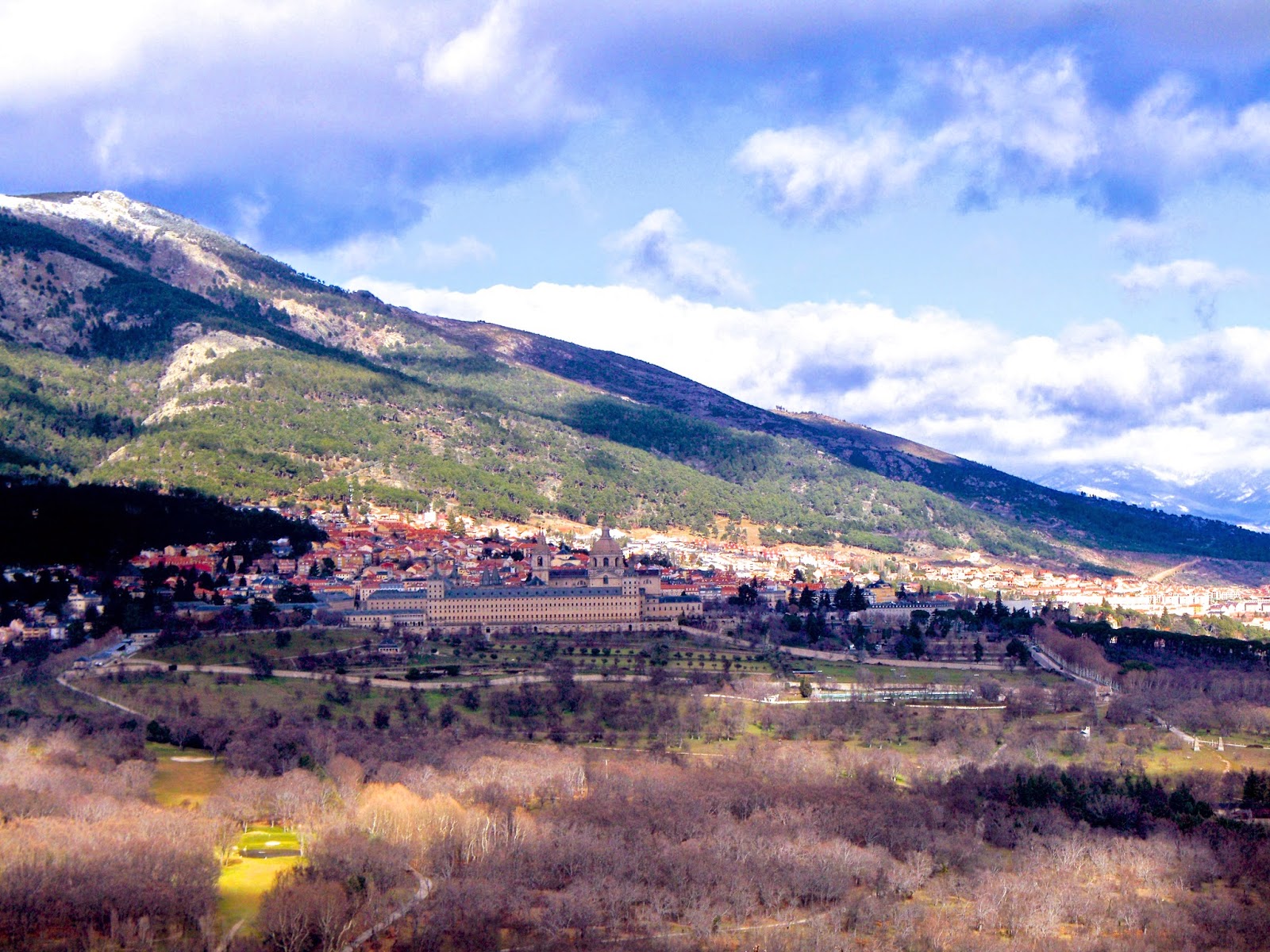 Seeing the town from above was absolutely gorgeous. 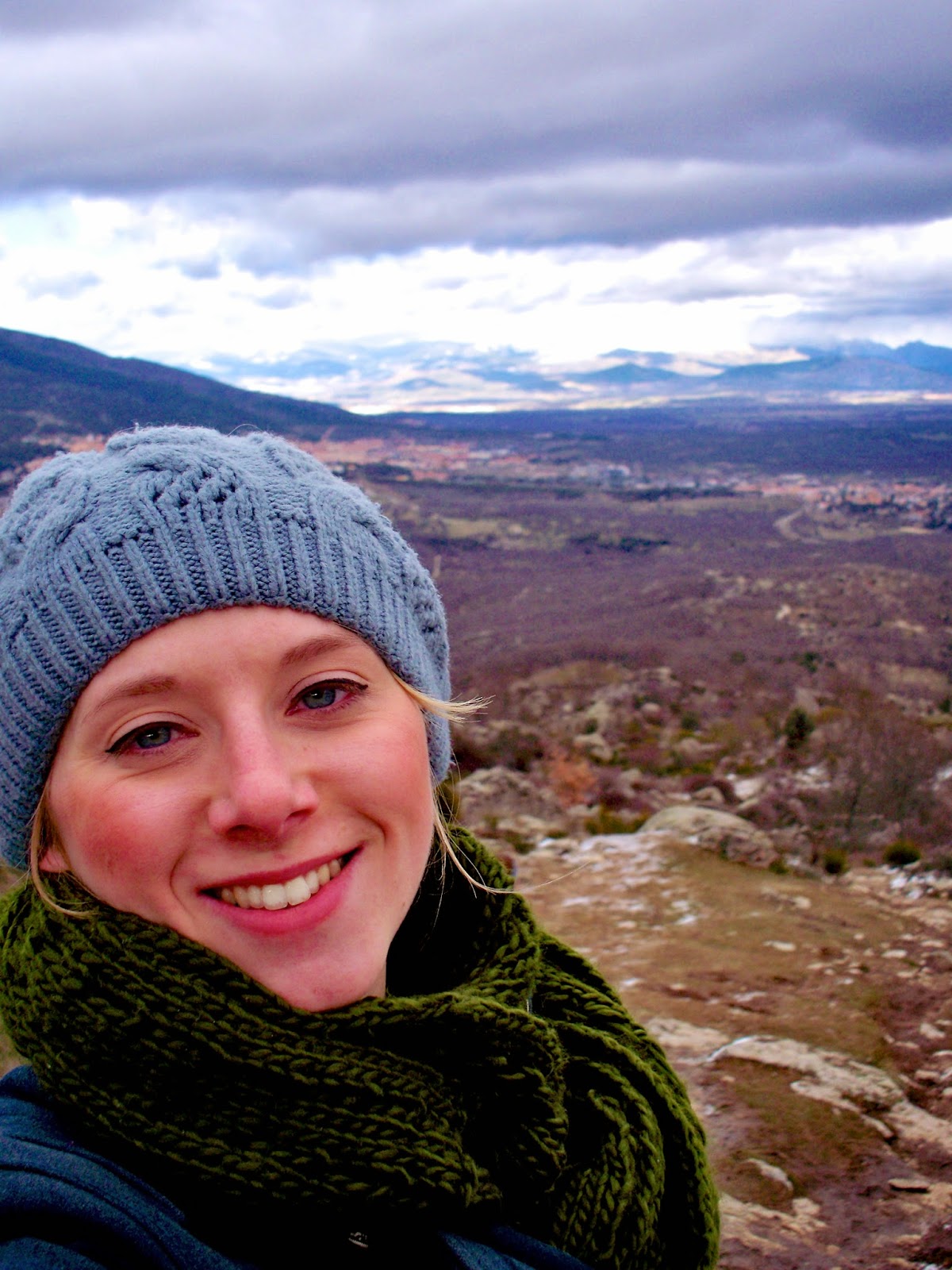 So were the snow-covered mountains behind me here. I wish they'd come out better in my photos!


I think my favorite part about walking through the woods is that it gives us a chance to get into real conversations with people. We're going to be with them for several hours, we might as well explain what's bugging us at the moment, right?

In my friend group, the topic always seems to be "where are we going with our lives?" ...I suppose that's pretty common for young adults. As I've said before, I'm getting a little sick of constantly having to ask myself the question "what's next?" I'm tired of moving all the time. Chatting with my friends in the woods made me start to think about how it's getting to be that time of year again, when I have to figure out where I'm moving next. What will be my next home, and will it be semi-permanent, or only for a few months? What do I really want?

At present, I have no real answers to these questions, and thinking about it too much makes my brain hurt. There are so many options and they're overwhelming and there are no clear answers.

Soon enough it will be crunch time, when I will be forced to make another life-changing decision. But for at least a little longer, I can try to just take my life here as it comes, continue thinking, but also allow those thoughts to be swept away with the wind when it all becomes too much.

So here's to moments of pause and reflection, of good conversations and body-warming exercise with friends. May they be there when you need them!