It shouldn't be a surprise to anyone that there has been a lot of unrest in Iberia (that's Spain and Portugal) lately. High unemployment plus rising taxes and cuts in social services do not happy bedfellows make. Recently, hardly a week has gone by in which I haven't seen some kind of protest marching down the street, be it here in Vigo or nearby in Portugal. 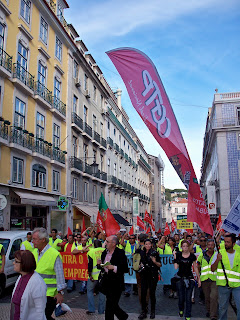 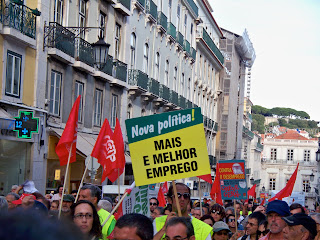 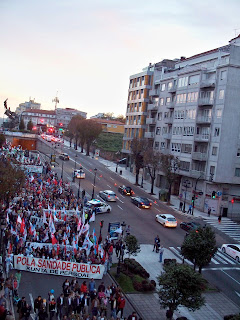 A march for public healthcare and its employees here in Vigo

But yesterday was an official general strike day, like the one that we had in March--except this time, it was in ALL of Iberia, plus some protests in France, Italy and Greece. The strike meant that when the clock struck midnight on Tuesday night going into yesterday, all businesses (including bars and restaurants, gas stations, buses, banks, grocery stores, you name it) shut down for fear of having their windows broken by angry trashcan-dumping, firework-wielding hooligans starting to strike immediately. And almost all of these businesses stayed shut all day, because those same hooligans were going around town and screaming about breaking the strike at the workers in the cafes and stores that were open, then vandalizing them with spraypaint. 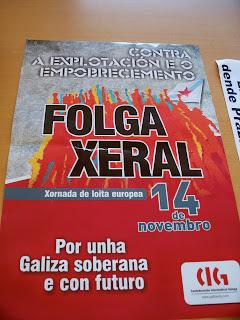 The goal of the strike was to stop the economy for the day and get the attention of European leaders, so in theory no one was supposed to spend any money or support "the system" in any way, and the hooligans were doing their best to enforce that. 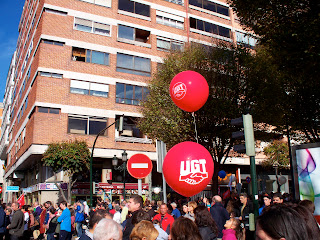 Not everybody was out vandalizing the scabs, though; what most people were doing (all across Spain, from what I heard) was participating in a march, which (in Vigo) began in a plaza at the top of the city and ended at another a ways downhill. I attended, not because I was on strike but because I was told it wouldn't be worth it for me to come to work when almost no students would be there anyway (although about half my coworkers went, but only 19 kids in the whole school showed up). 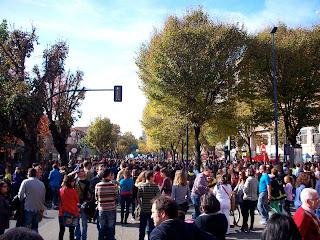 There were so many people at the march that you couldn't move, but it was interesting to me that everyone was just walking calmly. It felt more like a mass Sunday stroll than a protest march, minus the giant balloons with political propaganda on them. Only a few people were chanting or seemed really angry. But there were so many people that apparently by the time we made it to the second plaza, the speeches were over and lots of people were heading home for lunch, which is exactly what we ended up doing. It all felt really anticlimactic, especially when lots of businesses opened up again in the afternoon and all the hooligans seemed to have dissipated. 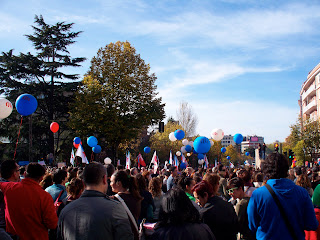 Everyone with their Galician-flag-colored balloons

Most of the buzz I heard from Vigueses about the strike was how useless a one-day strike was, how it wouldn't accomplish anything, and how it was stupid to complain when Galicia just had elections and most people didn't even vote, so the conservative party won again. And honestly, I tend to agree. Quite apart from the stupidity of the violent hooligans, I really don't think one day of missing work is going to do much, particularly considering all the money the corporations and government saved by not having to pay those people yesterday.

I guess I'm just contrasting this one-day strike with pickets and marches and strikes I've seen and heard about in the US, like in my freshman year of high school when all the teachers went on strike for a month or the protests I went to in Madison, WI against Governor Walker. And from what I saw, this strike day (día de huelga in Spanish, or folga in Galician) seems like it didn't work as well as those ones did. I'm not sure if it accomplished much or even got that much attention worldwide. Reading US newspapers, it seems like the answer is no (although judging by the usual quality of US newspapers, that could just be normal American ignorance to anything happening outside its borders). But it is interesting to see how people in different countries try to express their feelings about political agendas.

And just for the record, I'm not saying Spain doesn't have the capacity for those kinds of more drastic measures as well--they did do the 15-M (masses of people occupying Puerta del Sol in Madrid) just over a year ago, which was what seems to have inspired the Occupy Wall Street movement. But as far as protests go, to me this one (dubbed 14-N, for the date) seemed a little less-than-effective. I know it's historical that much of Europe is banding together to fight cuts in public services, and that two general strikes in one year is a big deal, but I don't know that it's going to change anything, particularly when the crisis is this bad.

Anyway, since Thanksgiving is coming up and I spent all day teaching lessons about it so I've got it on the brain, I'm going to wrap up by saying how thankful I am to be able to have a job in Spain at this particular moment in history, but also to know that no matter how bad things get in Europe, I always have an American passport waiting to whisk me away (should I choose to go) to a place where things are slightly more economically stable. Plus America gave me the gift of the English language, which is enormously valuable and one of the only things keeping me afloat in these uncertain times. Cheers, USA.
Posted by Alisa at 11:43 PM No comments:

In September, I took a short leave of absence from this blog, but not (completely) out of laziness. It was actually for a much more exciting reason--my parents came to visit! Yay! And then we went traveling for almost 3 weeks. Double yay!

But since our trip was so long, and since my parents are my primary readers anyway, I'm not going to go through every detail of it. Here were the highlights for me: 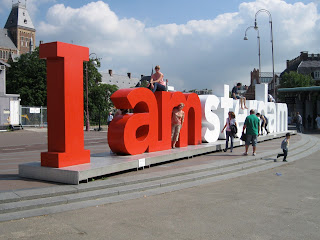 OK, we may have popped by Amsterdam too... 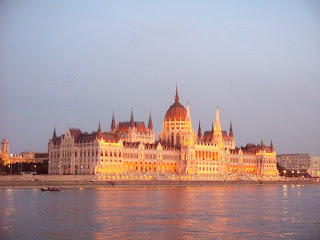 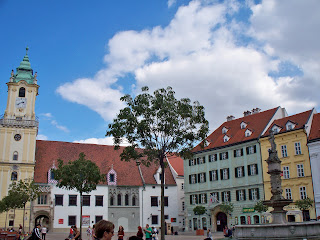 Bright colors, cheap prices, and way less touristy than Vienna--what's not to love? 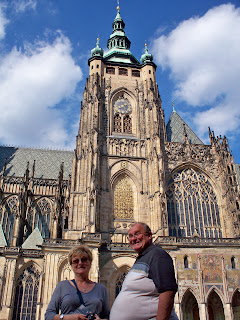 These will be cherished memories one day...

Quite a long vacation, but as my mom always says, "it was a good trip." Miss you guys already, and can't wait to see you again at Christmas!

It’s been a while, as usual. Why might that be? Because this year I’m crazy busy. It’s a good thing most of the time, but it does make certain things (like this blog) suffer. So here’s what’s been going on: school has started off well, and being back for a second year is really nice. I like already knowing everything and everyone, where I’m going and what to do.

I’m doing a ton of private lessons this year, which is a very helpful addition to my travel fund. Also, it’s really nice to get to see some kids every week and really feel like I’m getting to know them and help them. I’m hoping to see them all improve over the course of the year. They’re all great kids, and I’m really enjoying working with them so far.

I've been busy lately with English/Spanish conversational exchanges, trying to make new friends to replace all the ones who moved away at the end of last year (miss you guys!), and enjoying the lovely fall weather (this includes hiking, among other things).

Also, I’ve been traveling! I’ve had two four-day weekends so far; the first one I spent in Lisbon with a new friend and the second in London with a very old one. Both great trips and a lot of fun, but I have barely had a moment’s rest! But I've decided I need a bit of a rest—this weekend (another 4-day weekend due to All Saints’ Day on Thursday and the puente aka bridge aka extra day off that links it with the weekend) there was Halloween, but I decided to turn down another possible trip in order to get healthy again (I picked up a cold in London) and do things around here that needed doing (cleaning, errands, etc. etc.) so that when things pick back up again next week, I won't be overwhelmed.

And now, without further ado, a bunch of pictures of my adventures. Enjoy. 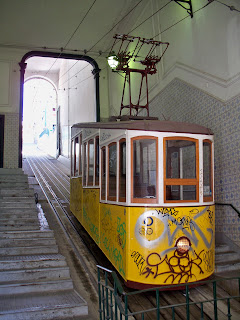 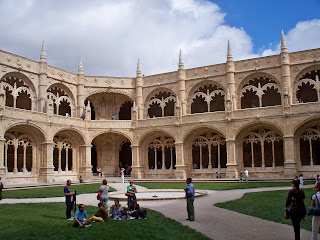 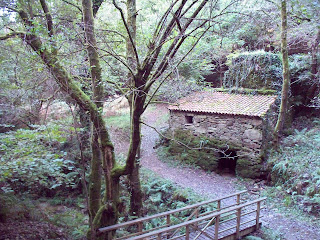 A muiño (mill) I saw on a hike here in Galicia 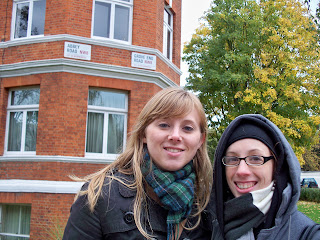 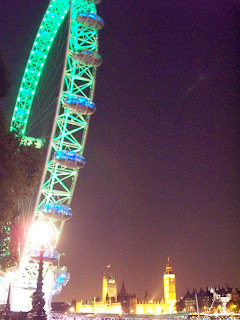 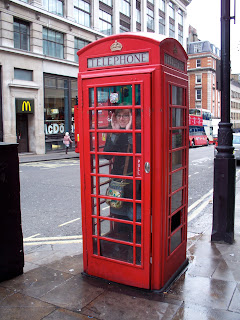 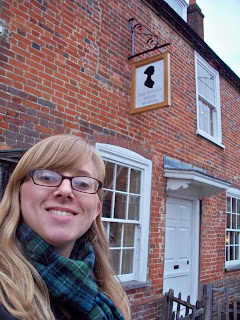 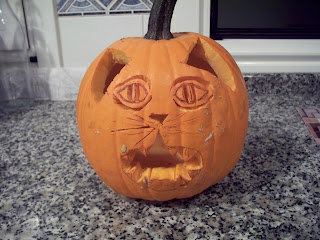