Many bloggers, at the end of the year, post a recap of all of the fun and exciting things they did that year. And that's pretty cool, I too like to remember all the cool stuff I got up to in a given year, see how it compares to other years of my life.

However, I'm also really REALLY lazy. So instead of summarizing the entirety of the past year, I'm just going to pick out the one biggest accomplishment I've made in the last year. 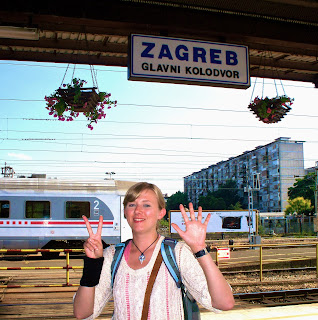 In June, while I was traveling with my parents, our train was stopped at a border crossing and our passports were stamped as we entered Croatia, and I was proud to be able to say that I'd finally done what I set out to do years ago--visit 25 different countries before I was 25 years old (and even with a bit of time to spare)!

Where did this goal come from, you might ask....well, it started on another train journey, back in summer 2009. I was backpacking with my Eurail pass across Europe. This particular day found me going from Nice to Paris, all on my own. I'd been traveling using trains in Europe for a few months by this point, but this was the first time I'd commenced a day's travels in France. Something you should know, if you ever happen to be traveling by train in France, is that you MUST stamp your ticket in the little yellow machines near the tracks before you board, or else the ticket inspector on the train will make you pay a hefty fine.

But I, innocent little study abroad student that I was, had no idea of this rule. It didn't exist in Spain or anywhere else that I'd traveled. So of course, when the ticket inspector started coming around, and the cute little old man next to me asked, "Is your ticket stamped?" I must have turned white as a sheet. He quickly gave me some advice, to pretend like I didn't speak French and had no idea what was going on, and maybe the inspector wouldn't be quite so harsh on me. But then, because I have incredible luck, the man across the aisle from me hadn't stamped his ticket either. But he was French, and because he fought back, he ended up getting kicked off the train.

When the ticket inspector returned from dealing with that mess, my savior of a little old man told me to put my ticket away and pretend like we'd already had ours checked, and to my amazement, it worked! The inspector forgot about us and moved on to the next group of seats, and I sighed the hugest sigh of relief.

So then it was only natural that the cute old man and I got to chatting about ourselves and our lives, and as the lavender-filled fields of Provence whizzed past the window, I learned that he was French, but had lived in Africa and England, and was currently a professor in Montréal. That in itself was impressive enough, but the one thing that really inspired me was when he told me he'd been to 83 countries in his lifetime. 83! At the time, having traveled to less than 10 (including the USA and Canada), that number was almost unimaginable to me. What things this man must have seen!

As the man told me about his various adventures in these many different countries, I made a promise to myself, that one day I'd be able to pass on amazing stories to some young person that I met on a train. That I'd be able to amaze them with the crazy places I'd traveled to. I told myself, I too want to travel to 83 countries in my lifetime.

And as I thought more about it in the months that followed, I realized that it's possible that I may not even make it to the age of 83, and even at the rate of one country per year, I was woefully behind. So I told myself then, by the time I'm 25, I'll have at least caught up to one country per year lived, and then see if I can get beyond that.

And now, here I am! I did it! There's still a long way to go before I get to 83, but I feel much more confident now that I'm capable of making it there.

2013 may have been my most travel-filled year yet, or at least, the one with the most crazy weekend adventures to faraway destinations! However, although my goal of making it to 83 countries before I die hasn't changed, I think that now that I've made it to 28 countries (yes, you read that right...between June and December I went to 3 more new countries, because I'm a traveling fool) I don't have to stress about being able to make it to 2 more in the next 5 years. I'm pretty sure I'll get to more than just that amount! So although I hope 2014 still contains loads of travel adventures, my goal for this time next year is to feel a little more settled, to find a place and make it home for awhile. And now that it's out there for the whole internet to see, I have to actually do it...right?