A Hallmark of an American Summer: The Fair 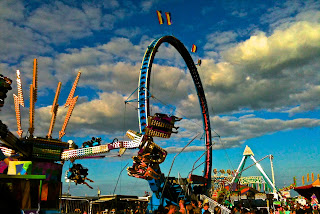 One of the things I miss most when I don't come home for the summer is the opportunity to go to the fair. Something about that combination of greasy food, free pens and stomach-upsetting rides just gets to me like nothing else can. It reminds me of my childhood, I suppose, and it's one of the most American of all summer activities. Luckily, this year I did come back to the old US of A, and I've spent my past few weekends going to not one, not two, but THREE fairs. The sugar hangover has been pretty brutal. 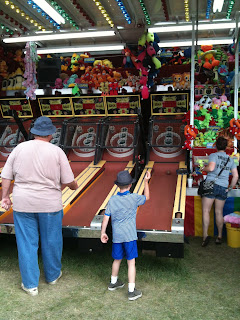 Watching this grandpa/grandson pair play skeeball to try to win a stuffed animal brought me back to my own childhood, when I'd beg my daddy to win me something, when I thought he was the strongest man in the whole world. Who can resist a blast from the past like that?

I suppose another reason I'm addicted to fairs is that something about the fair seems deliciously old-timey, making me think back to the days when many Americans farmed out on the frontier and the county fair was the only time in the year when they got a taste of the fantastical world outside their small community, when they could let down their hair a little bit and have some fun. 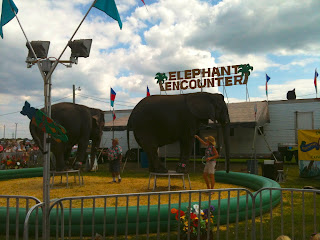 For example, as sad as I was about these elephants having to spend their lives doing tricks for the masses, it made me think of people way back when who must have been amazed to see that such an animal even exists outside of books. It made me look around me at all the farmers who probably will never have the opportunity to go on an African safari and see a real elephant. Are they that different from the settlers of the frontier 200 years ago? I guess not.

And if I thought the county fair was fun, that was nothing compared to the Minnesota State Fair, which I went to over Labor Day weekend. A full day of doing nothing but eating things that were deep-fried (cheese curds, elephant ears, doughnuts, yum yum!), going on rides with my 9-year-old niece, and fighting crowds to see a laser show at night. What more could you ask for in a fair experience? 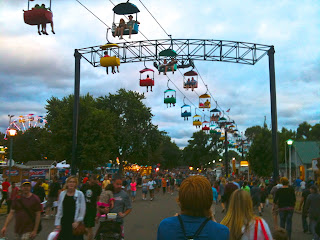 Check out the crowds! 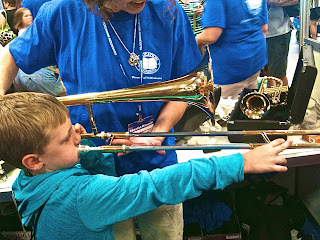 Actually, one of my favorite parts of the day was going with my nephews to the Education building, where the littlest one proved that size matters not when he was able to show us all up on the trombone!

Here's to the American fair, which nothing I've seen in Europe can come close to. I may be an expat, I may cringe at Lee Greenwood's "Proud to be an American" (long story), but I'm a yanqui at heart--at least in some ways.

Europeans and fellow expats--is there anything to truly rival the American fair over there across the pond? Americans--anyone else hit up one (or several) fairs over the last few weeks? And is your stomach angry with you too?
Posted by Alisa at 7:12 PM