Once again (as always), sorry it's been so long. Working in Spain isn't always as exciting as I would like it to be, so I don't have that much to write about! But I do get to work with hilarious children every day, and sometimes they say things that make me giggle. here are some of the gems that my students have done or said so far.

Some of these questions are mundane, but I'm sorry--Slipknot. Spanish kids listen to Slipknot. So horrible and so funny.

In a class of 11-ish-year-olds, one of them was obsessed with Guns ‘n Roses and Nirvana and wouldn’t stop naming off songs that he liked, although he clearly doesn't know what any of the words mean (or at least he didn't until he put them into an online translator). So funny. I love the kids like that, who have a passion that will make them want to learn something. But it's incredibly amusing to me that this kid is 11 and likes awesome music although he doesn't know what it means.

In the primary school, I showed a slideshow of my life in America, including my family and my house and my favorite hobbies, etc. It was really cute whenever the kids went “woooooow” every time I showed them a new slide. And it was funny that they thought all my nieces/nephews were my kids, and then when I said no, they guessed that they were my grandkids. Silly children!

In one class, I had a 10-year-old boy tell me that octopus is his favorite food. Only in Spain. (Well, no, probably not...but not in the US, that's for sure!)

The 10-year-old children knew immediately upon seeing the picture of my house that the minivan in the picture was a Chrysler, without being able to see the logo or anything. (Seriously, blew my mind. They practically don’t even have minivans here…how the heck did they know that????)

In a class of 8-9-year olds, one girl came up to me and said (in English, bonus points!) “You’re so very pretty!” How sweet, right? And another boy wanted to know if I had a boyfriend or not…inspiring crushes in 9-year-olds, my life is complete.

One day, I asked about pranks the teenagers have pulled, and some kids told me that they took all the screws out of the wheels on someone’s car, egged the school, etc. I asked whose car it was, and they said they didn’t know! And they said all this in front of the teacher! I laughed so hard. In the US, the teacher would have gotten them in trouble for saying that stuff (or at least, my teachers in high school would have I think). And they also said all the teachers in the school are witches except for the English teachers! Again, I laughed out loud. Then when we left class, I saw a kid moonwalking down the hallway because I had just taught them the words to Thriller. Clearly, I am having an awesome effect on these children.

One day when doing food vocabulary, the kids (and the teacher too) thought the idea of peanut butter and jelly was completely disgusting. Ha! I let them smell/look at my peanut butter (which I conveniently keep with me at all times) and they all wrinkled their noses. Silly, silly. They were also confused by fried rice and tacos. (Spain is really really not into ethnic food...plus the word "tacos" here means swear words!)


I taught one primary school class the song "I Wanna Hold Your Hand," and I had them fill in the blanks. I was trying to get them to guess the word "hand," and one kid guessed "jamón." I laughed so hard, and I'm sure the poor thing had no idea why...but I then couldn't stop singing to myself "I Wanna Hold Your Ham" and giggling.


The primary school kids also treat me like I'm a rockstar, which is the most awesome thing in the whole world. They're so excited to just say hello to me every time they see me in the hallways! One time I was walking out of school as the buses were leaving, and a bunch of kids started pounding on the windows and waving at me. Then in town I saw another student and he screamed hello at me from across a courtyard and his mother looked at him like he was insane. It's so nice to be adored.


This past week, I taught the teenagers about Thanksgiving, and although they weren't that interested in the holiday itself, they loved my descriptions (and video) of Black Friday and the craziness (and violence) that occurs. A couple of kids decided that they want to visit the US someday, based solely on my descriptions of Black Friday! That's perhaps not the reason I'd have picked for them to want to visit my homeland, but I guess whatever works...
One last thing that I love…I find it so fun to be called “profe” and “teacher.” It makes me smile every time. Luckily they never call me anything else (besides my name of course).

So there you have it, part one of many of Spanish Kids Say the Darndest Things. Stay tuned for future hilarity.

And since I have absolutely no relevant photos, here is a beautiful sunset I saw the other day. Enjoy. 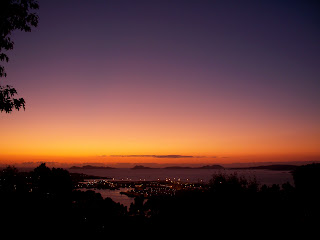