Enough posts complaining about Spain. I’m trying to get over feeling depressed about my various woes and not whine any more. So now you get to hear about all the awesome things I’ve been up to.

First, some cool things I’ve done. I went to a modern art museum in Vigo, which was free and had this exhibit that was an entire floor of the building filled with balloons. And you just walked through them. It was super cool.

I went to Las Islas Cies (over a month ago now), like I said previously, which (again) is a nature preserve on some islands off the coast of Vigo. It was gorgeous. Here are some pictures! 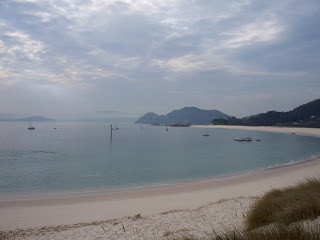 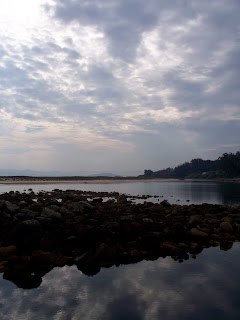 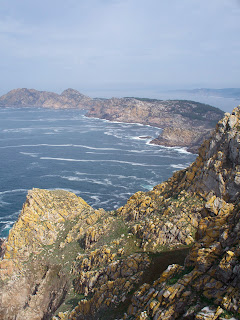 A view from the top of the island

I went to an Oktoberfest celebration in downtown Vigo with a bunch of guys dressed in leiderhosen. That was really fun, because they were playing super random old music, like a Grease medley and Man I Feel Like a Woman and the Twist…and everyone was dancing, including all the children and old people. It was so funny, that they dance to such super old music and are so enthusiastic. I felt like I was at my high school prom or something. There was this big guy in an orange shirt who was SO into it. They were even dancing on the (fragile) tables, and there was a conga line and a hoedown. No shame in Spain, and I love it!

I also had family lunch at one of my teachers’ houses for 7 hours. It was her parents, her husband, her brother and sister and cousins (from France! so weird to hear Spanish with a French accent) and sister-in-law (from Argentina), and her son. They were all super nice and very funny to be around. They said that I spoke super good Spanish, and I more or less understood what they were all saying to each other, even though they spoke very quickly. I didn’t say a whole ton because I was feeling shy and also had a headache, but they were very funny and entertained me plenty. The father was this cute old man and was obsessed with Galicia and Gallego, and at one point after lunch came over to me and made a big show of whispering in my ear, asking me if I liked the food. So funny. They were very curious about languages and America and etc. We got into a funny discussion about whether NYC is on the ocean and why you can’t take a sailboat out into the Hudson River. We ate good food and I was really stuffed by the end. They were all so funny and so welcoming, and I felt so included and awesome the whole day. They kept me there from 1 until 8pm, just chatting and eating, and then afterwards the sister and in-law drove me back downtown and then decided that they should take me to the beach to see the sunset, so we went there. Then they took me for a coffee before dropping me back off at my apartment. What an awesome day. It was so nice to feel welcomed and like a part of something

I also went to a seafood festival in a little village with some friends. It was a beautiful day and the fresh seafood was so good! Here are some pictures: 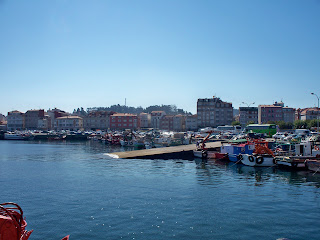 The town where the festival was held, which was so gorgeous. Look at the color of that water! 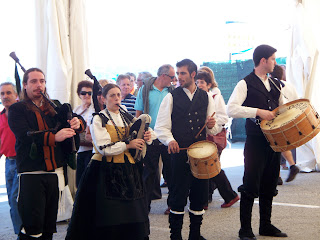 People playing the bagpipes, which are traditional instruments in Galicia. 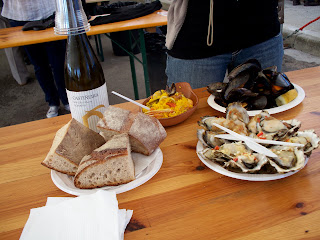 Some of the food we got--so delicious!

I’ve been spending lots of time with friends, doing various things, including cooking some meals together, which is really nice. It’s amazing how much you rely on your fellow expats when abroad.

Two weekends ago, a good friend of mine from college (also an auxiliar) visited from Málaga and I took her to Santiago de Compostela and Porto, Portugal. They were both really nice. In Santiago, we saw the cathedral and the pilgrims who did the Camino de Santiago, and we spent some time in the old town. We also had a delicious lunch with caldo Gallego and tarta de Santiago. Here are some pictures! 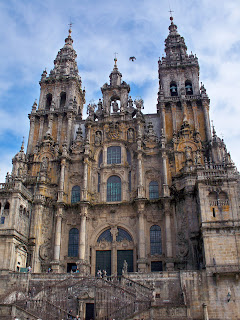 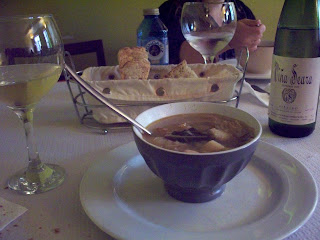 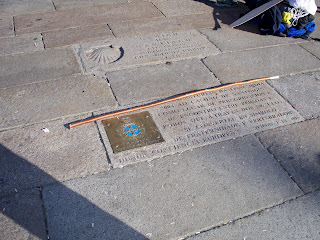 The shell, a symbol of the pilgrim, and an actual pilgrim's walking stick 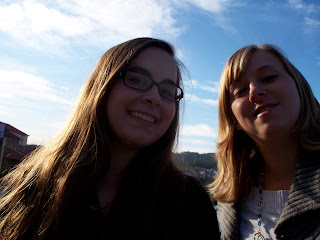 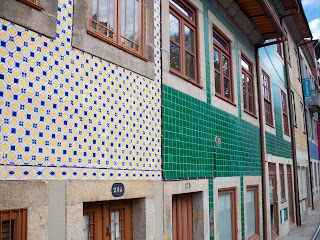 In Porto, we spent most of our time in the old town as well, watching boats go by and looking at the bridge (designed by Gustav Eiffel). We really liked the brightly-colored buildings and the tiles on many of the walls. Plus we ran into some kind of celebration, where there were these students from the University of Porto who were dressed in suits and capes and who were shouting and had strings of pop cans around their torsos. Still don’t know exactly what that was about, but it was cool! We also had a big lunch, where I tried the Porto specialty, the Francesinha, which is a sandwich with every type of meat you could think of, drenched in gravy with melted cheese and a fried egg on top, all over French fries (so kind of like poutine plus a big meat sandwich). It was good, but slightly overwhelming. I’m pretty sure I could feel my heart saying “no more cholesterol!!” Here are some pictures of all of that. 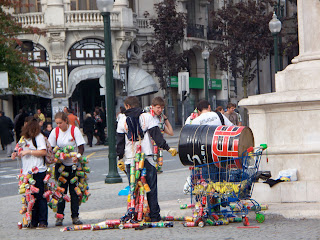 Students with pop cans--happy or angry? Still not sure. 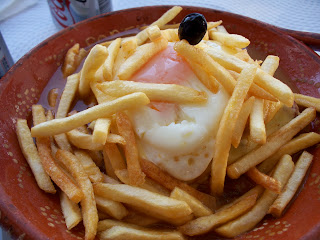 A heart attack sandwich, otherwise known as a Francesinha 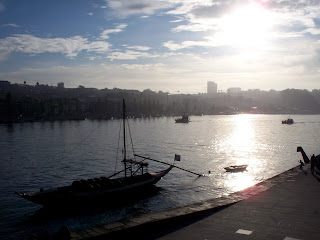 A view from the old town

And of course there was Halloween, so I went to a party. It’s interesting how much more you value the things from your home culture when you’re away from it, although I must say that I’ve always loved Halloween because I love costumes! I dressed up as Lucille Ball, one of my favorite actresses of all time (I really do love Lucy). Unfortunately red hair is not for me! Out of vanity, I'm going to refuse to show you a picture, but it reaffirmed my desire never to dye my hair red again (okay, so I made some bad choices when I was 13...give me a break!).

I can’t believe it’s November already and that I’ve been here more than 7 weeks. So crazy. I’m starting to worry that this experience is going to fly by! I guess it’s time to start thinking about figuring out something for next year!

My advice for this time is to stay cheerful. Think about the rainbow after the torrential downpour (Did I mention we had one of those a few weeks ago? It flooded a bunch of the city and felt like a hurricane to me. Welcome to rainy Spain!). Here’s my rainbow. 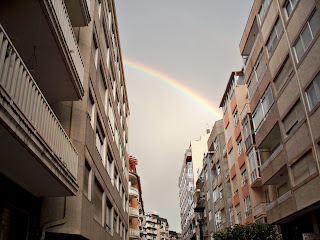 Uff da, sorry about the long entry--had months worth of stuff to catch up on!
Posted by Alisa at 6:10 PM