Oops, it's been awhile, hasn't it?

I have several excuses ready, don't worry. Initially the plan was not to post until I had found an apartment, and then that turned out to be way more difficult than I thought. Then I got sick with the stomach flu, probably sicker than I've been in my life (or at least in a very long time), so I was trapped in bed for almost 4 days. And now I live in an apartment that does not yet have internet.

So all of that means...no posts very frequently, at least not for now. And no pictures! Sorry. :(

But I like Vigo very well so far (which is where I've decided to live...I came and then couldn't get the ambition up to go check out Ourense as well...which I'm sure is very nice, but I'm lazy!). It's very hilly, which will be a good leg workout!

I've also noticed that Galician people seem to be MUCH friendlier than the Basque people were. Not that the Basques were UNfriendly, just...more introverted. Galicians so far seem to want to go way out of their way to be helpful all the time, and are willing to strike up conversation at any moment. And the Galician language is not completely incomprehensible. So I like Galicia pretty well so far. It helps that tapas are free here!

I don't have too much to report, as I haven't yet started school (Monday! Eek!). I did say I'd tell about my flight and how 36 hours of travel is excessive...but I've since decided that that's pretty self-explanatory.

I can tell that today I went to a nature preserve on these islands called Las Islas Cies, which was gorgeous. There are forests and rocks and crystal-blue water all in one tiny area. Pictures to come, I promise. Plus pictures of my apartment. And Vigo itself.

Until next time, I'll leave you with one vocab word that I've learned: chavales, which means kids. I'll probably be needing to use that one a lot!
Posted by Alisa at 9:04 PM No comments:

The Circle of Life

From the day we arrive on the planet,
and blinking, step into the sun
there is more to see than can ever be seen
more to do than can ever be done!
So sorry about the long hiatus, but I’ve been busy! Getting ready to travel abroad for a year takes a lot more work than you might think. I’ve been out doing important stuff, like getting my visa, buying last minute items, stocking up on makeup and deodorant and medicine, looking through all of my clothes and deciding which ones are the most practical (very difficult, considering that last time I was there Europe taught me to love clothes!), trying to cram all of the aforementioned STUFF into airline-regulation suitcases, and spending time with and saying goodbye to friends and family. 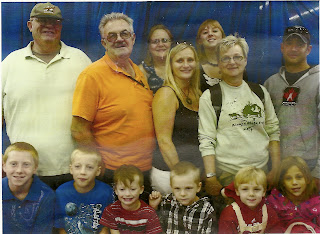 A large chunk of my family 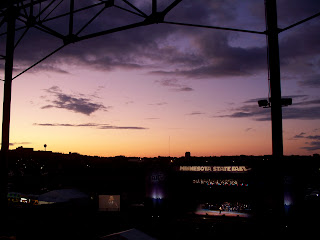 One of the things I had to do before leaving the US
As you might guess from the quote above, one of my goodbye events included going with a couple of my good childhood friends to see The Lion King in 3D. (In case you were wondering, I thought it was cool to see it again on the big screen, but the 3D made little difference.)

That song has been stuck in my head ever since, and so I’ve been thinking a lot about how even though I could never see everything on the whole planet, I’m glad that I’m about to go out and hopefully see my fair share.
I’m currently stuck in airport limbo (where time and place don’t really exist, otherwise known as a layover), but you’ll be hearing more about my 36-hour journey to Spain, my terribly heavy bags, and how it was all a poor idea in my next entry, once I actually arrive there and have interesting things to report.
Until then, I’m trying to remember a very important motto: Hakuna matata!
Posted by Alisa at 8:50 PM No comments: