Takeaway from My First Blogging Conference 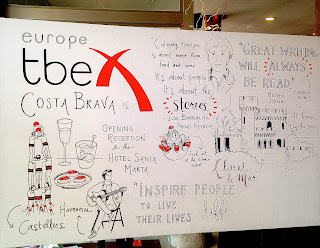 This past weekend, I went to my first-ever blogging conference, TBEX Europe 2015. I honestly wasn't sure what to expect before I went, and I felt increasingly nervous about it in the weeks leading up, as I thought more and more about what it might be like.

Would the others laugh at my silly little "hobby" blog?

Would I find the information useful when I have no real intention of monetizing my blog?

Would I actually be brave enough to try to talk to a large crowd of 400 strangers?

Something you have to understand about me is that I'm enormously introverted as well as shy to boot. Large crowds of strangers make me extremely nervous, especially when I perceive them to be "better" than me somehow. So this conference had the potential to be a perfect storm of awkwardness for me. But I'm determined to overcome my social anxiety and become better at making new friends, so the weekend was also a perfect opportunity to practice that! 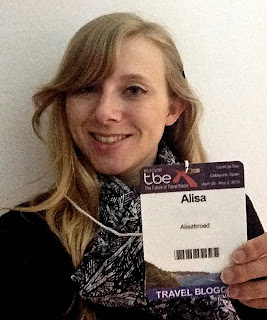 The first day was extremely overwhelming. We arrived later than other people on the day after the official welcoming party due to work schedules, so things were in full swing as we walked in. Lots of others seemed to know each other, and while I was introduced to some people right away, I felt so self-conscious about making a bad first impression that I probably didn't make one at all.

After a couple of sessions on improving the writing style of our blogs and a big lunch, I felt slightly more at ease, so during the afternoon when other people were networking with airlines and tourism boards, I was trying to build up the courage to talk to some strangers and make new friends. I kept circulating throughout the room, ostensibly checking out the pastry selections on the various tables scattered throughout the hotel lobby and continuously downing and refilling my glass of water. In reality, I was scoping out whether there seemed to be any friendly-looking people whose conversation I could easily join. A couple of times, I awkwardly stood next to groups of people, waiting for a good moment to jump into what they were saying, but finding none, eventually slunk away. After awhile, I found myself sitting at a table in the corner by myself, furiously scribbling away in my journal, disappointed in my lack of social skills.

The more I wrote, though, the clearer my thoughts became, and I eventually came to the conclusion that although I need to work on starting conversations with strangers, I haven't given up yet, and that is admirable. Despite my clear lack of ease in this area, I keep putting myself in situations that will require me to practice conversing with new people, and for that I was proud of myself. I realized that although I had been a bit of a failure so far in the conference, the remainder did not have to be predicated on what had already happened. There was still opportunity for improvement.

Just realizing this felt like a huge weight being lifted from my shoulders. My anxiety didn't dissipate entirely, but I felt more courageous about spending the rest of the weekend chatting with strangers.

That night and the whole next day, I made a great effort to jump into people's conversations, even when it felt awkward or strange. And I began to find that people didn't really seem to mind. Bloggers are a pretty friendly bunch, after all.

Of course, I would be greatly amiss if I didn't mention that I was greatly aided by the fact that I happened to have come to the conference with two of the biggest names in the travel blogging world, my friends Linda and Craig from Indie Travel Podcast. Just mentioning their names with new people gained me instant recognition, and they spent the whole conference introducing me to all the most important people in travel blogging, who also just happen to be some of their best friends. I have to say, it was kind of weird to be chatting with new people one night and then realizing the next day that they were giving some of the most important talks in the whole conference (including the closing night session)!

Still, in general, I think I learned a thing or two about small talk with strangers, and I'll be interested to try to put that into practice in the future (with or without a buddy there to hook people with "Have you met Alisa?")! 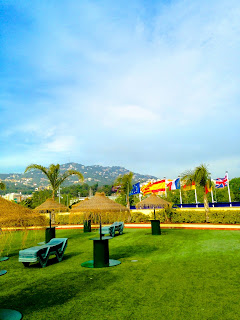 I also learned that I'm just a wee bit different from a lot of other bloggers. I've never felt so out-of-step with the times as being asked hundreds of times in one weekend for my Twitter handle, when I still don't really "get" why I should be on Twitter in the first place, and therefore don't have one! I also don't have business cards about my blog, the other big currency at a travel blogging conference. Oops.

It seemed like the majority of other people at TBEX were trying to make contacts to be able to sell things from their blog, or use their blog as a means of advertisement so they could go on comped trips. Now, I don't think there's anything wrong with that--there's obviously a need for companies to promote their product (vacations), and many bloggers have become unwilling to provide for that need using money out of their own pocket. I get that. It makes a lot of sense, and I found the weekend immersed in this whole new world of advertising through blogging and of people who travel for a living absolutely fascinating.

That said, I have no real desire to make money from Alisabroad. I don't really care if I make a name for myself, I don't give a damn about SEO, and I don't intend to make this blog my full-time job. I'll never say never, because no one can ever know what the future will bring, but for now I'm really, genuinely only writing for myself. That's not to say that I don't appreciate that people want to read what I write, but I'm here for the community, I want to share my experiences because I think it brings me closer with people, and I have no desire to try to convince people to do anything, except maybe learn English as a second language. Seriously. 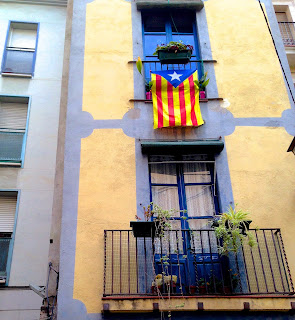 Still, despite occasionally feeling like a fish out of water, I had some lovely moments at the conference. It was nice to be surrounded by people who really "get" my lifestyle, who are also constantly on the move, who haven't settled down yet in a permanent home. When we met, it wasn't "Where are you from?" but rather "Where are you currently based?" and "Where have you been recently?"

One of my favorite moments from the whole conference was on the last night, standing with a group of women, discussing the nitty-gritty practicalities of traveling long-term. "What do you do about shampoo?" one of them asked. Suddenly we were trading secrets about refilling travel-size shampoo bottles with luxury shampoo, debating the practicalities of checking a bag occasionally, and lamenting those times when we'd had to throw away a half-full shampoo bottle before getting on a plane. I felt like they truly got what my life is like in a way I haven't in a long while, and that was good.

So even if I may never use some of the marketing tools I learned at the conference, it was definitely worth it for me socially, if nothing else. And besides that, it was lovely to have an excuse to get away to a beachside town like Lloret de Mar for the weekend. Have I mentioned yet that I really miss the ocean? 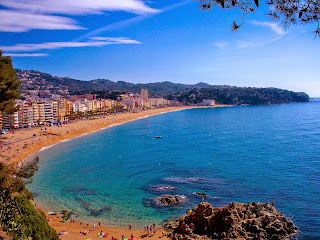 I was also incredibly impressed by the welcome we received from the Costa Brava tourist board, who gave us adorable gift bags with the best present inside--a free portable phone charger!

And then there was the food. Oh my god, the food. I was blown away by the amount of food put in front of my face, free for the taking, in one short weekend. I spent the lunch buffets stuffing my face with seafood, and then got to the dessert table and went only slightly overboard with a desire to try absolutely everything. Buffets are dangerous for the adventurous eater, oh yes they are! 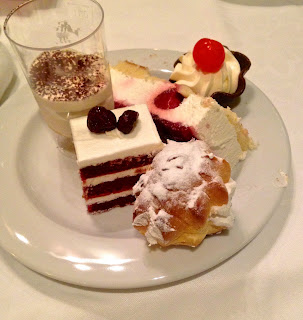 I was honestly shocked by not only the quantity of food given to us, but the incredibly elaborate way in which it was presented. Behold the butter dolphins on the seafood table, which seemed so elaborate and extravagant that I felt like I was at a fancy wedding. 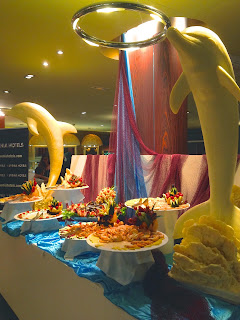 I was also impressed with the hotel I stayed at (chosen by me and not affiliated with the conference at all). Slightly out of the way at the other end of the beach from the conference's hotel complex, it was a rundown mom-and-pop place where the receptionist seemed incredibly relieved that I spoke Spanish, because he clearly couldn't communicate in anything besides that and Catalan. I'm fond of authentically Spanish places like this, especially after the slightly jarring feeling of being surrounded by other English speakers at a conference in Spain, leaving me unsure what language to speak in to the conference's hotel staff. But my shabby little 25€-a-night hotel had one major perk--free continental breakfast served on their garden terrace. Toootally worth it. 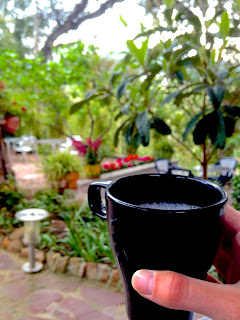 Another great thing about the weekend that had nothing at all to do with the conference itself was the discovery of a bunch of food trucks on the town's main square. I had both authentic Mexican food as well as my first galette bretonne avec du cidre in nearly a year. So ridiculously good. 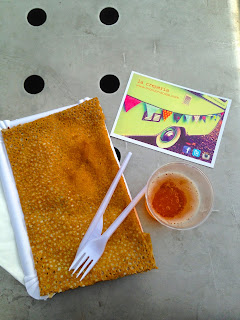 And getting back to the conference itself, I was also amazed at the effort put into the official parties. Free sangría on the hotel rooftop? A party overlooking the beach at night, complete with Galician queimada? Wow. That even gave me a chance to impress people with my stories of exactly how this firey drink is prepared, and all the times I had it while living in my beloved Galicia. 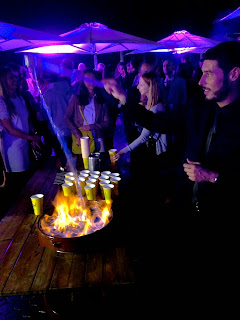 So, overall, was TBEX worth it? Although I was somewhat at counter-purposes with the actual raison d'être of the event, I still had a really good time. I thought the information sessions were mostly of high quality and very interesting, regardless of whether I ever put that information to good use or not. The food was excellent and abundant, the parties were tasteful and culturally appropriate, and the other bloggers were not as scary or snobby as I had initially feared. So, was it worth my $129? I'd have to say without hesitation, a huge resounding YES.

Will I go again to a future TBEX? I don't know yet, but I would absolutely consider it, for the food and friends alone, if nothing else!