OK So Now That You Know What Spain Is, Let Me Tell You About Northern vs. Southern Spain

As promised, it is now time for another learning lesson blog--Northern vs. Southern Spain. Last time, I offended huge quantities (ha) of Americans by accusing them of not even knowing what Spain is. Now it is time to further offend and/or educate those people by telling them about the different parts of Spain. When most Americans think of Spain (assuming they know that Spain is not Mexico), they probably think of extreme heat, flamenco, tapas, sangría and bullfighting. 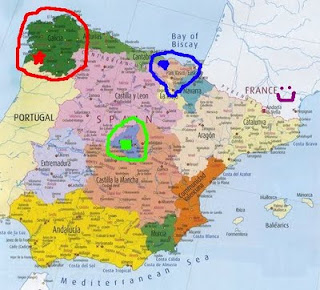 Actually, Spain is *gasp* not all the same! The different parts are...different! There are definitely some things that the 17 autonomous communities (shown in different colors on the map above) share. Some of the "Spain" things really are true...like the siesta. Yay! But being in the north of Spain is mostly nothing like the "typical" Spain that Americans think of. It really is like another world.
On the map above, I have circled Galicia, the region in which I will be living when I move to Spain this time (in red, with a star by where I will be teaching), el País Vasco, the region in which I lived when I was in Spain in 2009 (in blue, with a dot by the city where I lived), and Madrid, the capital of Spain (in green). Oh, and a smiley face by France because...I love France!
Anyway, hopefully this will help give some perspective on how far I really will be from southern Spain, where it is hot and arid and they dance the flamenco. In case it doesn't, I can tell you that Google maps tells me it is a 10.5 hour drive to Andalucía (the southernmost region of Spain) from Galicia. To give you more perspective (and to attempt to stem the questions of "won't you be so close to where you lived before?"), I feel I should also tell you that it is a 7 hour drive from Galicia to Bilbao, my old city.
Still, I'm guessing that Bilbao and (Vigo or Ourense, wherever I end up living) will probably be similar-ish, at least in terms of climate and culture. That's because, much like the USA, Spain's culture has a huge divide between the north and the south. The north is green, hilly, coastal, temperate, and honestly the culture is completely different from that of southern Spain. I guess that's kind of hard to explain, but it has at least something to do with never having been taken over by the Arabs (or the Moors, or whatever you want to call them), with having been isolated by mountains, and with (in the case of both Galicia and el País Vasco) having a language separate from Spanish. They eat different foods, they dance different dances, and they simply behave differently.
In el País Vasco, this goes so far that the people there (many of them, anyway) don't even consider themselves Spanish. They're Basque, and they find it offensive when people refer to them as Spanish. Now, there are a lot of other issues wrapped up in that fact, but it's something that hugely separates their culture from that of the south, where people are *extremely* proud to be Spanish. Galicians, from what I've heard, consider themselves "Spanish," at least to the point where they're not offended to be referred to as such, but it's still a completely separate culture. Actually, from what I hear, Galician culture is quite similar to that of Ireland or Scotland in some ways, because of a lot of Celtic influence there (see: they play bagpipes for fun).
So, anyway, this post was kind of long and rambling, but hopefully it got across the point that northern Spain and southern Spain are different, and will help to dispel myths that I am going to a land of deserts and flamenco.
Posted by Alisa at 5:55 AM