Am I the only one having a hard time believing that 2015 is already more than a quarter over with? 3 months gone, just like that! And while I've been posting a lot more frequently in here this year than I have in the past, there are still some moments that have escaped me. I'm a pretty busy gal, for all that I wish I could be doing more!

So this post is about the unseen moments so far in the first quarter of 2015. These are the things that I did that I never got around to mentioning to anybody, that I took photos of and then forgot to share! Yes, sometimes I forget that I took pictures that I meant to post on the internetz. Oops.

I kicked off the year in France, and one of the first things I did was see Marseille for the first time. Honestly, I'd heard pretty bad things about it, and my impressions mostly confirmed them, although there were some factors going against my having a good time there (like a not-so-great AirBnb host, for one!). Still, I did see a few things worth taking a pretty photo of! 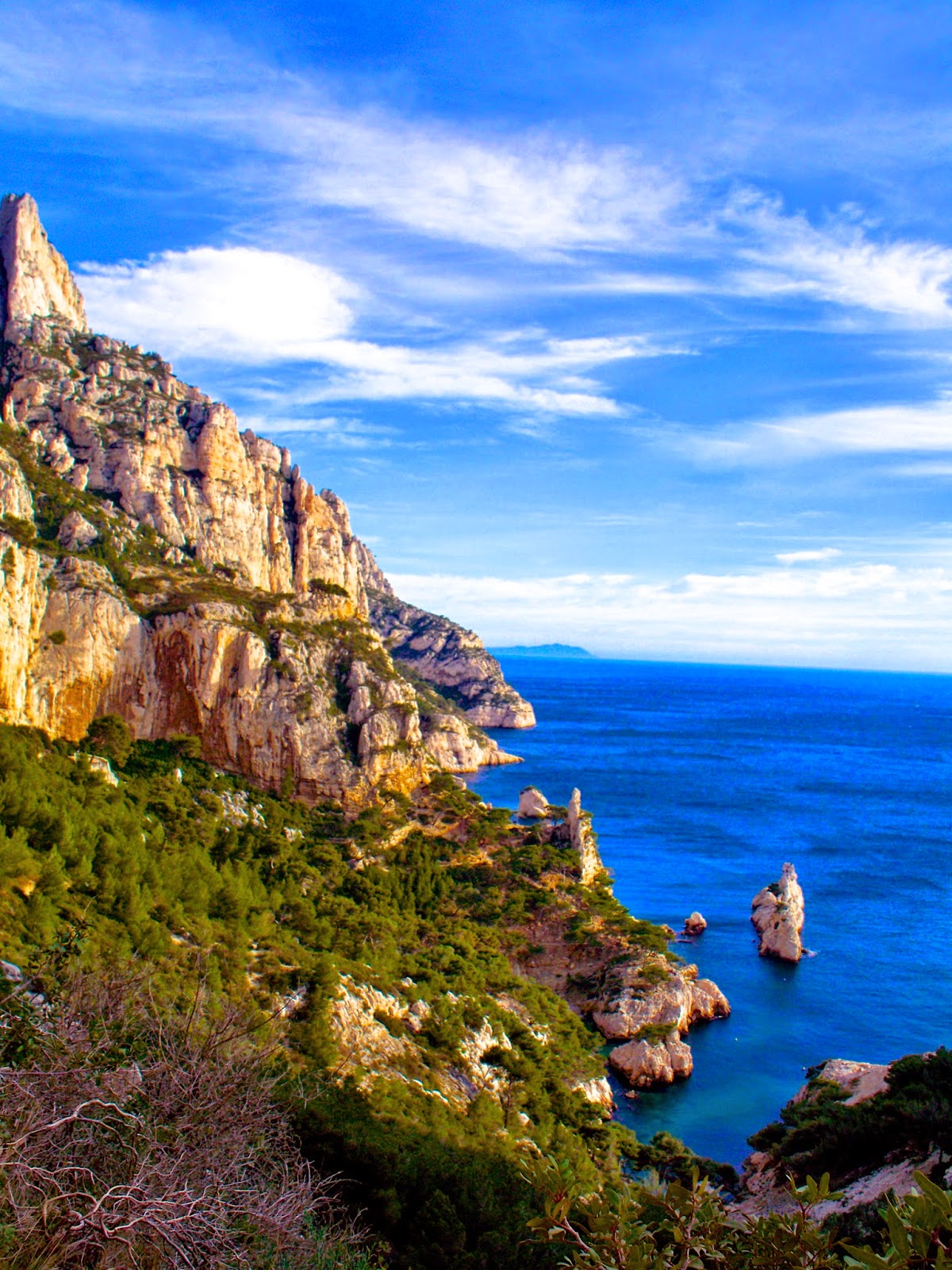 These are the calanques of Marseille, something I never knew existed until they were right in front of my eyes. This moment was also amusing because I didn't actually know what that word meant at the time, just that it was the thing before me...so I laughed when later I looked it up and went "ooohhhhh, FJORDS!" Fjords in general rock my socks off, and these were no exception. 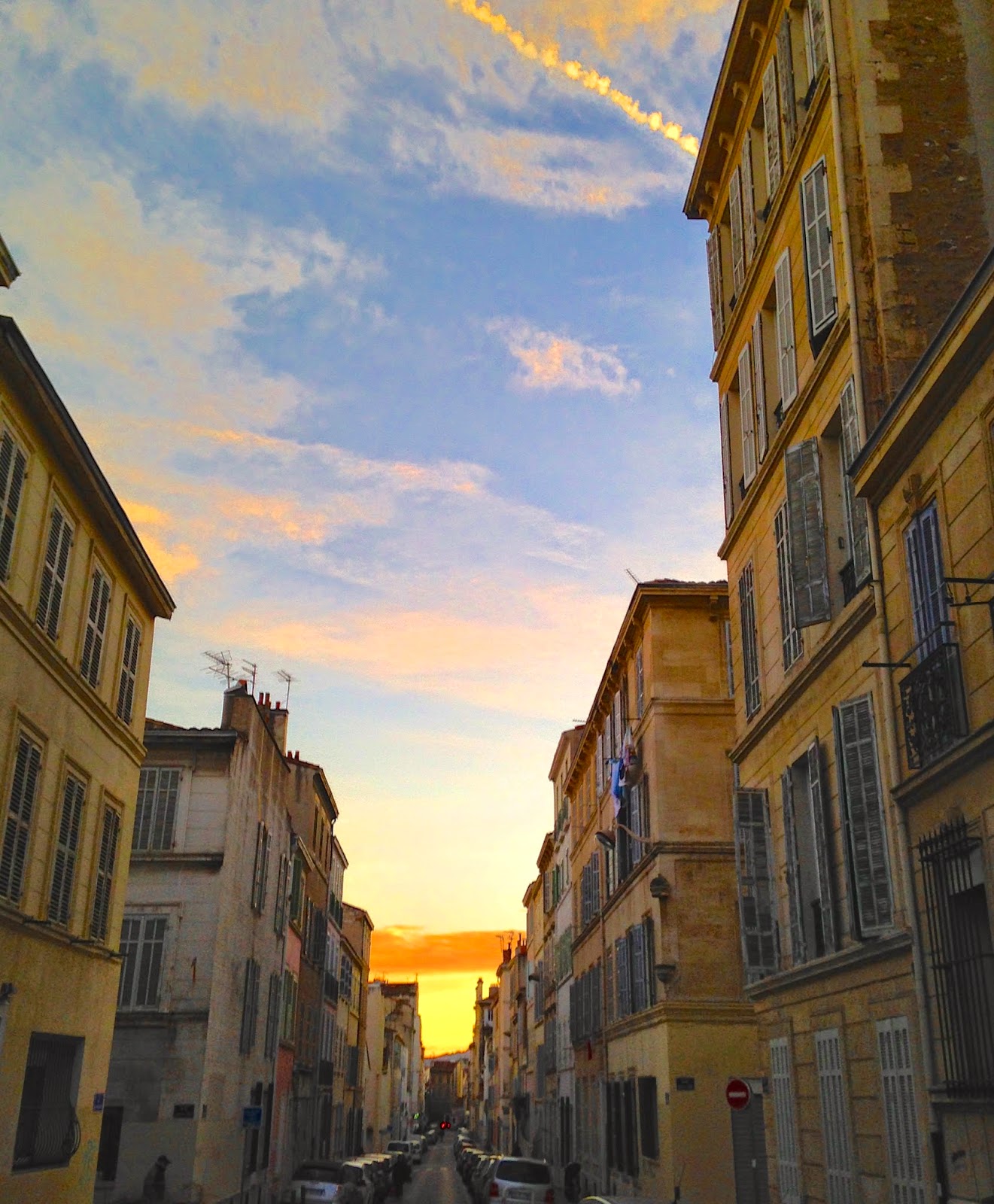 For all its nitty-gritty-ness, Marseille did show me a few beautiful moments, like this one when I was walking down the street at sunset. 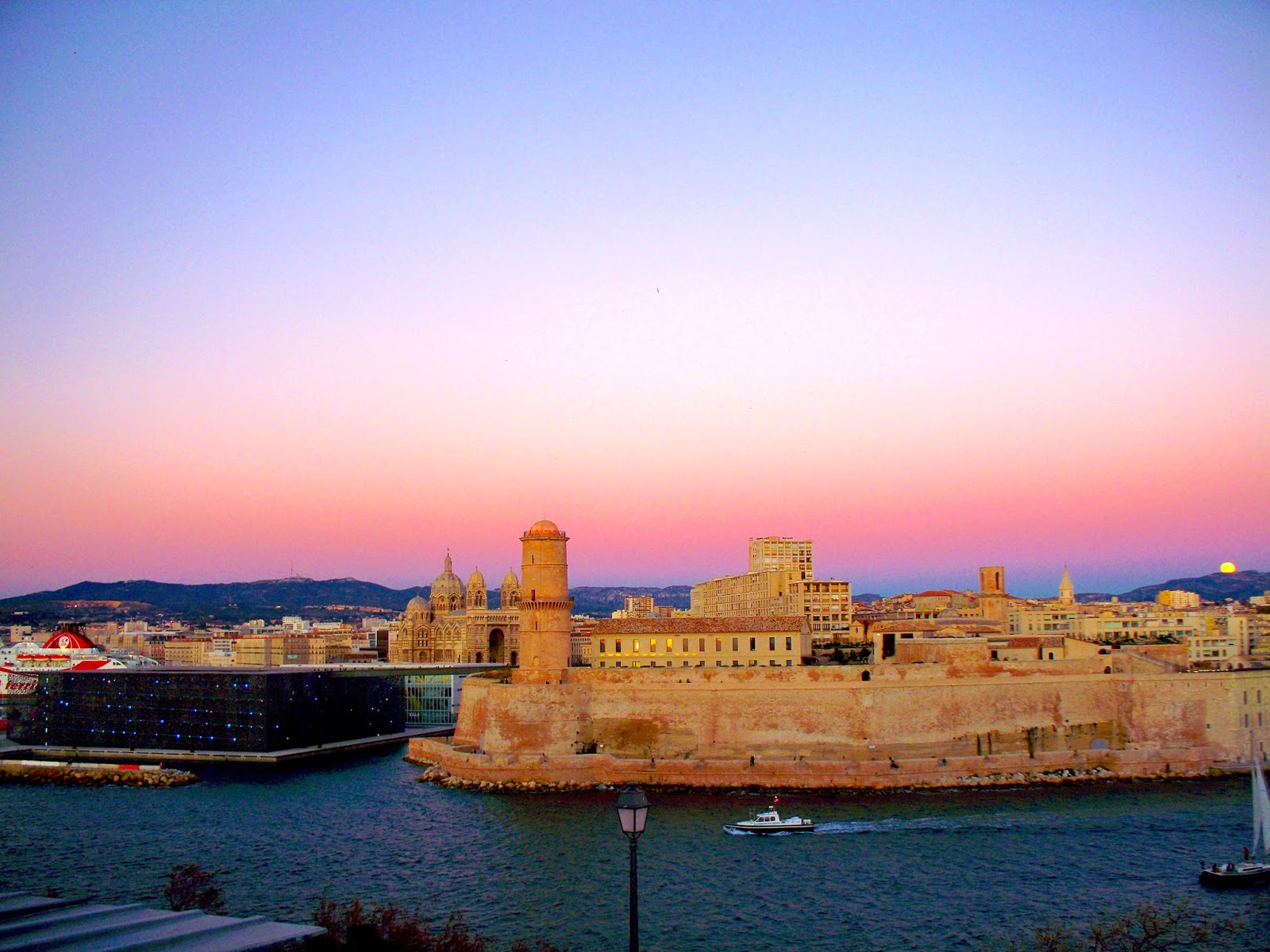 Have I mentioned that I love sunsets? The next night, I went to a park on top of a hill to watch this one over Marseille's old town. I loved watching the full moon rise over the mountains, too! 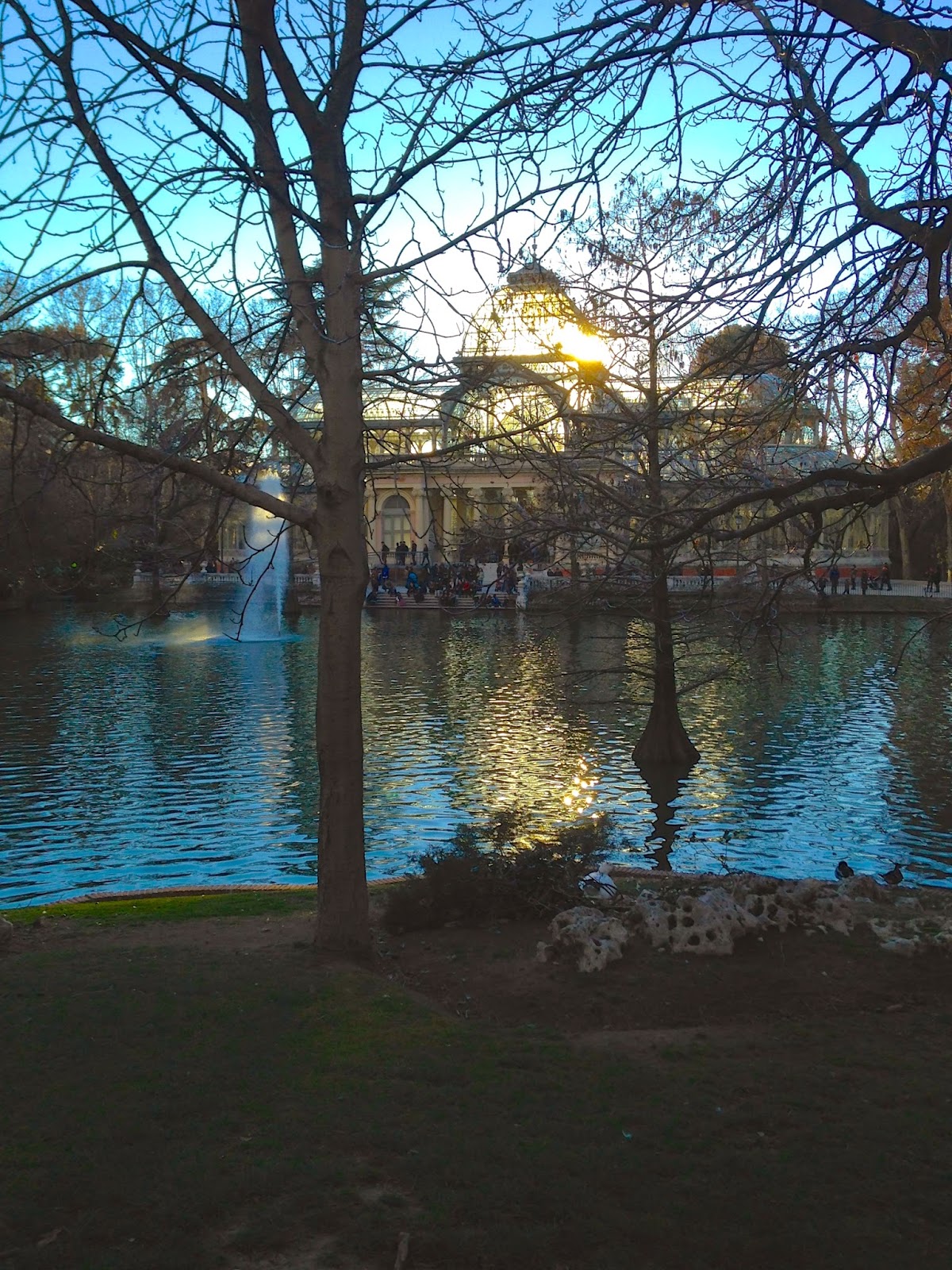 Here's a pic from a random day wandering around Madrid. Most weekends in 2015, I've been heading into la capital because...Alcalá de Henares has started to bore me. It's pretty, but there are no young people here! I need friends, after all! Since one of my best Galician buds lives in Madrid, we hang out a lot, and this picture was from a day when we decided it would be nice to walk around El Parque del Buen Retiro (or just Retiro, for short). The crystal palace there is beautiful in...you guessed it, sunset light. 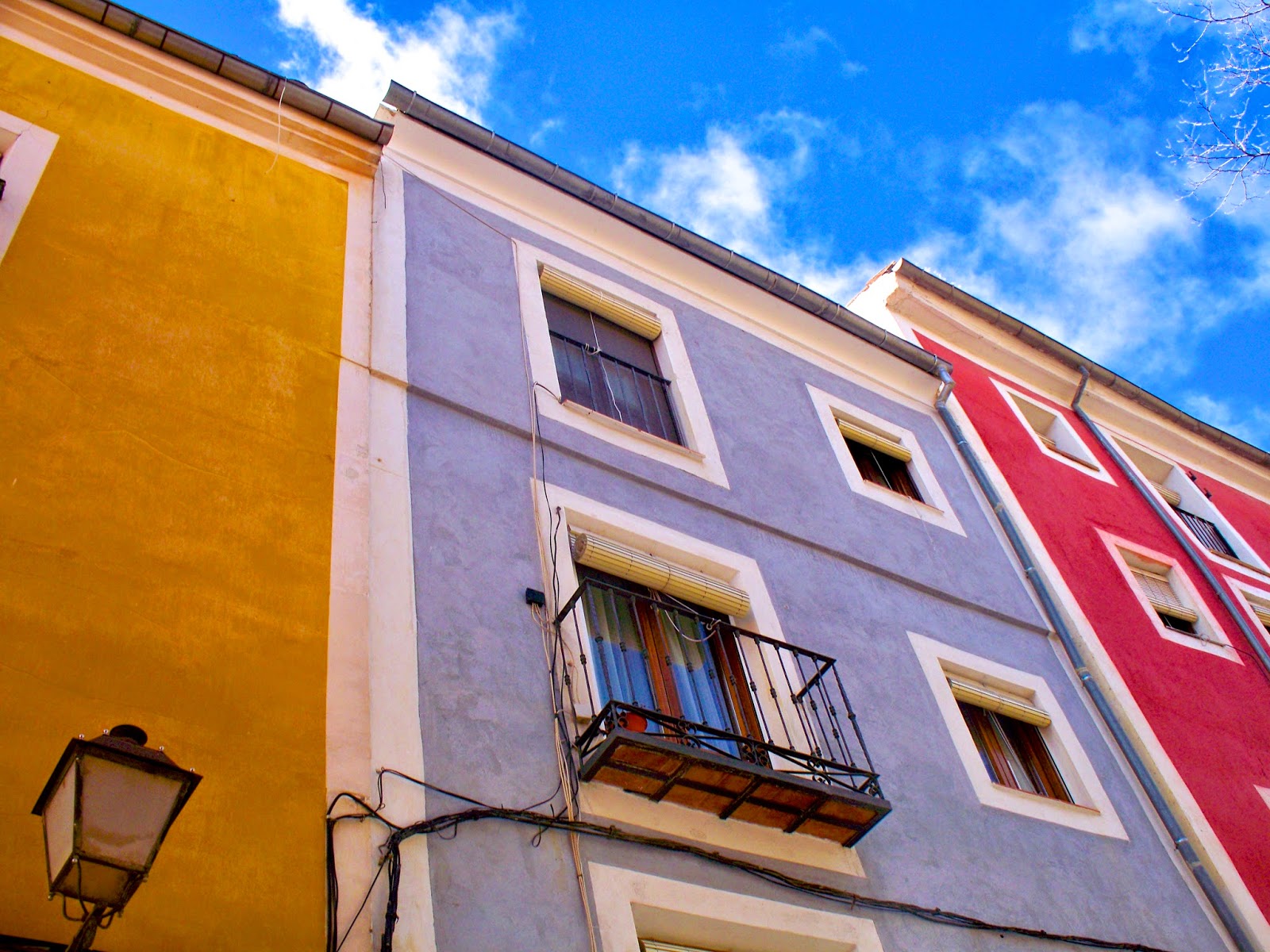 Another weekend, we headed off on a last-minute Couchsurfing adventure to Cuenca. I honestly knew nothing about Cuenca, other than having seen the name in guidebooks, but I was blown away. I fell in love with the way the houses were painted so colorfully! I love bright colors, and living in a city like this one would make me feel so much more cheerful! 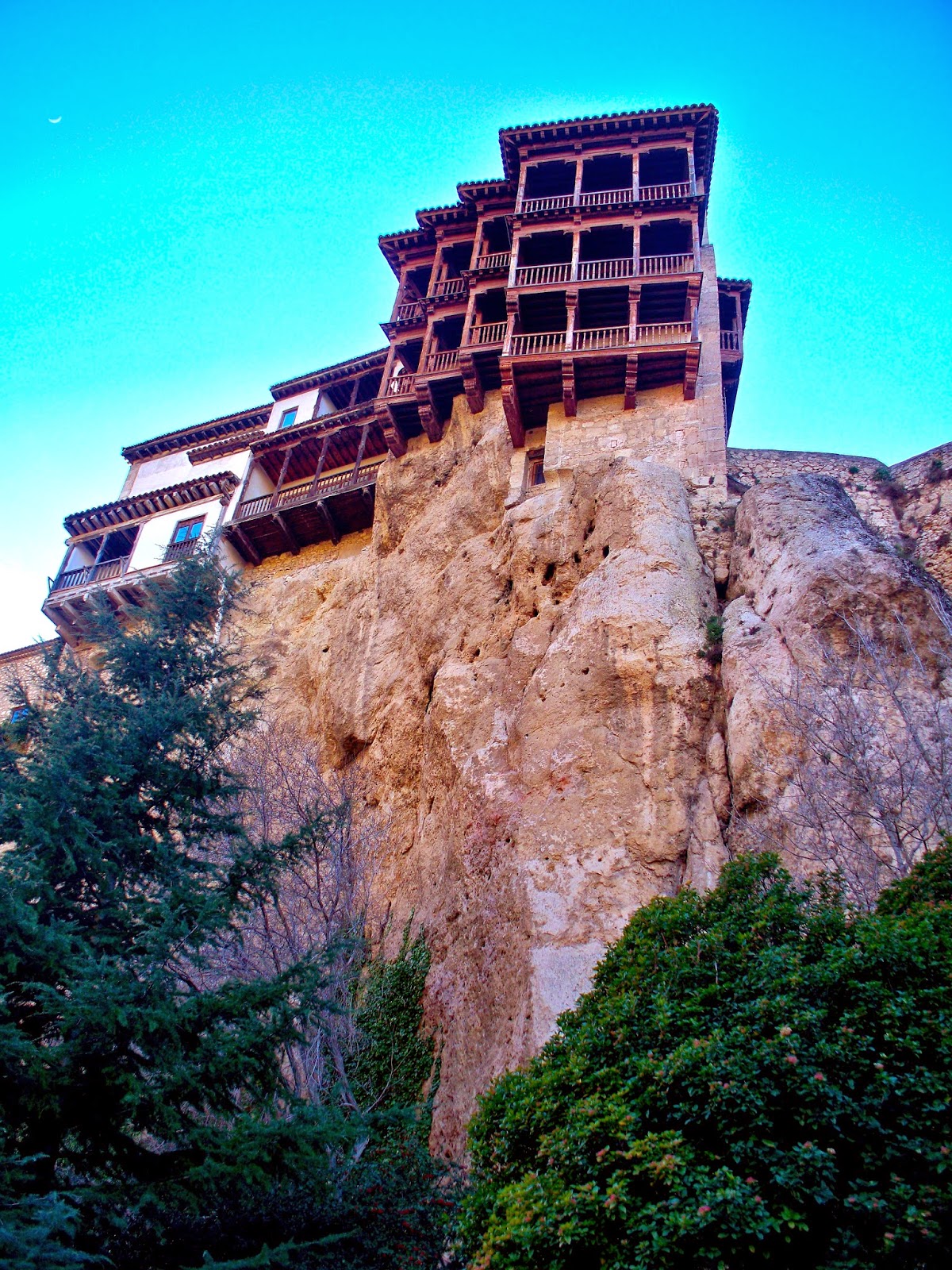 I soon learned that the actual reason Cuenca is famous is not for the brightly-painted façades, but the casas colgadas (hanging houses). Cuenca was built on the edge of a canyon, with some of its houses teetering over the edge. I have a growing fear of heights (thanks, Mom), so you wouldn't catch me living in one of these houses! They're really stunning though, when seen from the safety of the ground. 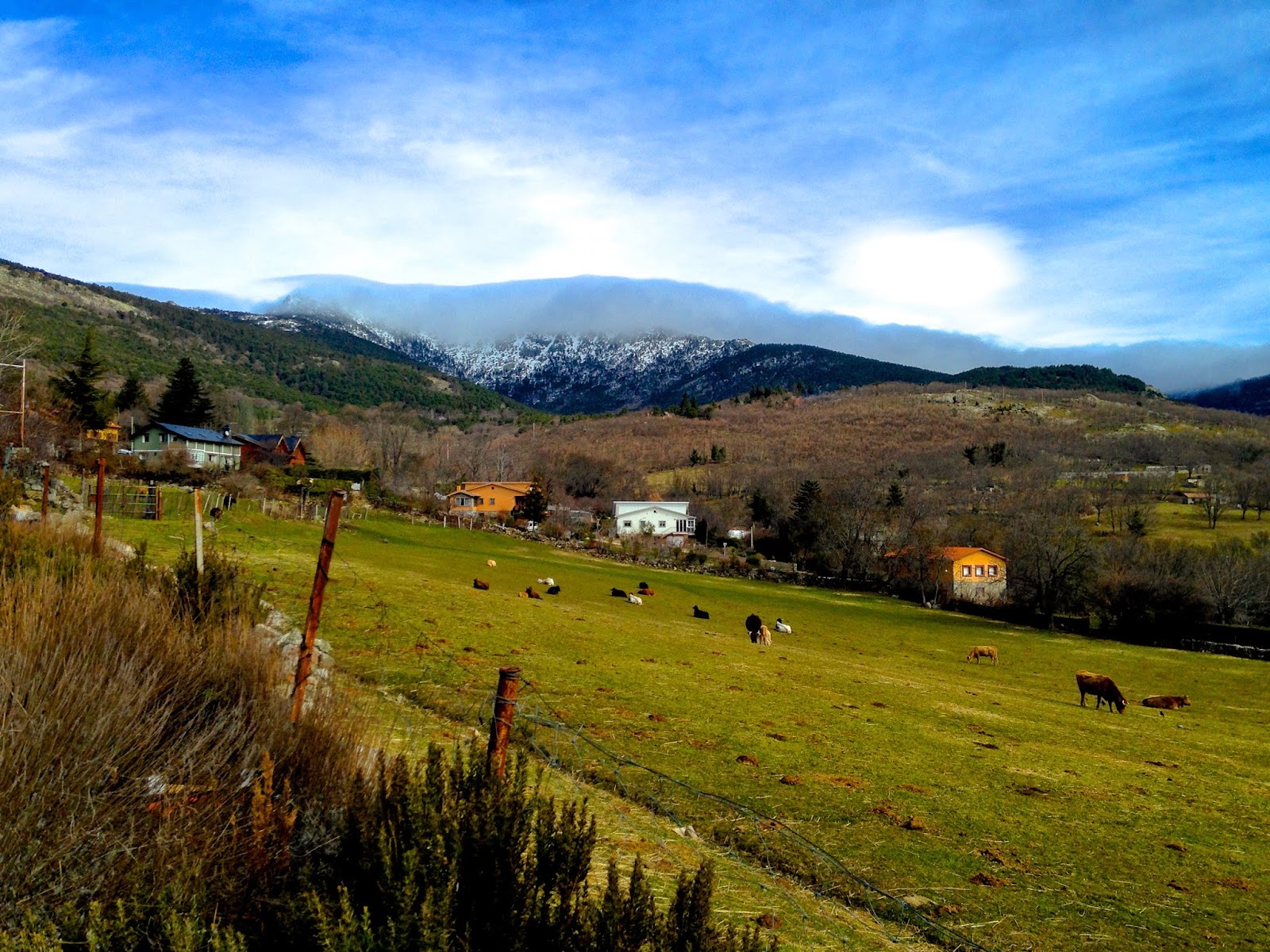 Despite all appearances, I do like going into the great outdoors. Another chilly winter weekend, some friends and I caught a bus to Cercedilla to do some hiking in the mountains. We got slightly lost and ran into some bulls, but were rewarded with pretty views, at least! 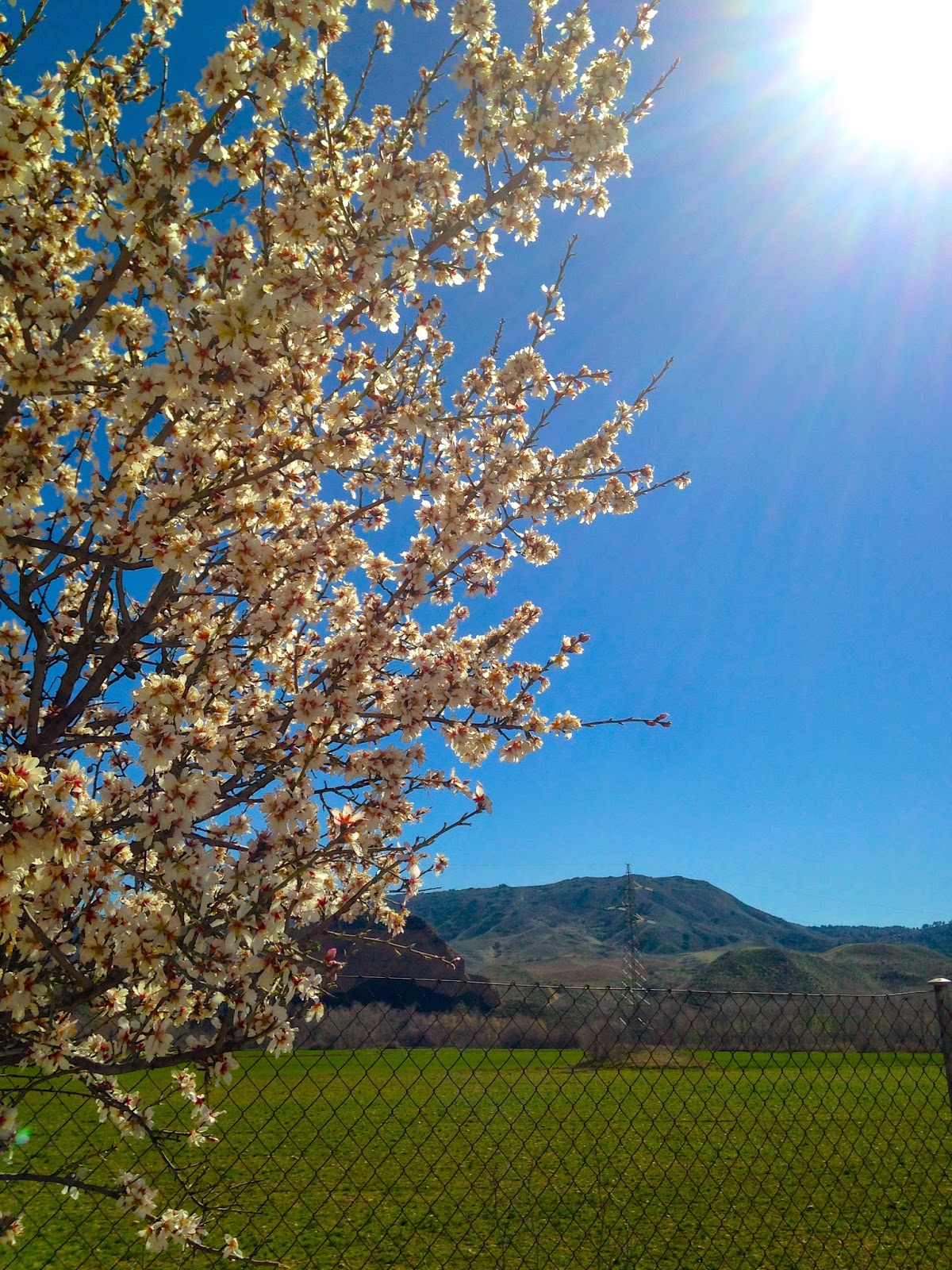 Finally, one day all of a sudden a few weeks ago, spring arrived! The temperatures shot up about 15 degrees (Celsius), and it was warm enough to go out without a coat. I love when I first see the flowers blooming, it makes me feel all warm and fuzzy inside. 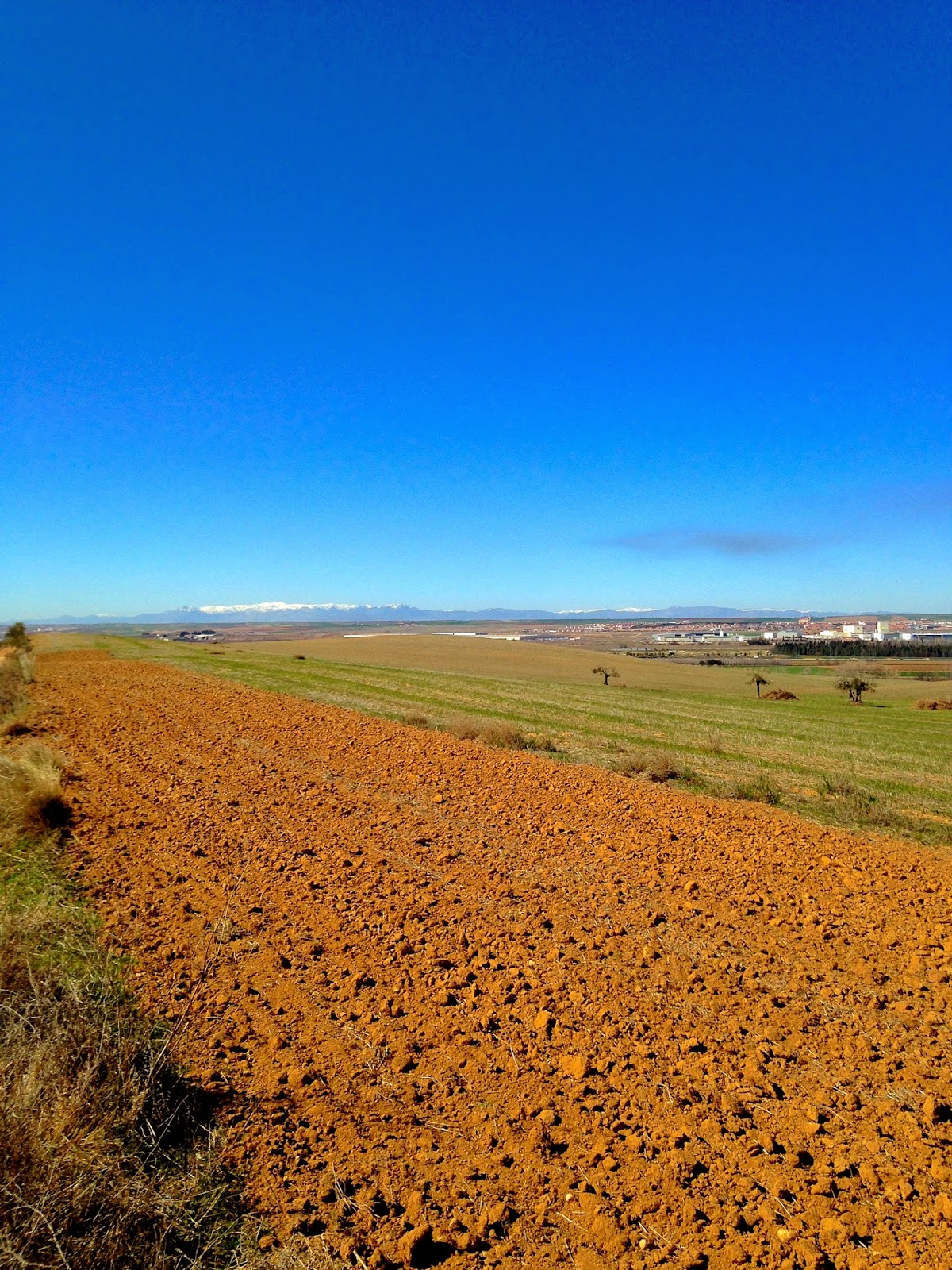 Taking advantage of the nice weather, I decided it was high time to go running outside again. The only problem was that, after a whole winter mostly cooped up inside, I got a bit too overenthusiastic and ran until I got lost somewhere in the hills near Alcalá. Oops. The views of the snow-covered Sierra were pretty, but walking about 5 miles back without a water bottle during the hottest part of the day was not fun. Thus the story of the day I accidentally went hiking!

I've been taking full advantage of the many little day trips possible around the region of Madrid. Another weekend, some friends and I headed out to Segovia, a nearby city that has a Roman aqueduct. I'd been there before, of course, but there are always new things to try in an old city. This time, I stumbled upon some delicious artisan beer at a festival, and tried suckling pig (cochinillo) for the first time. 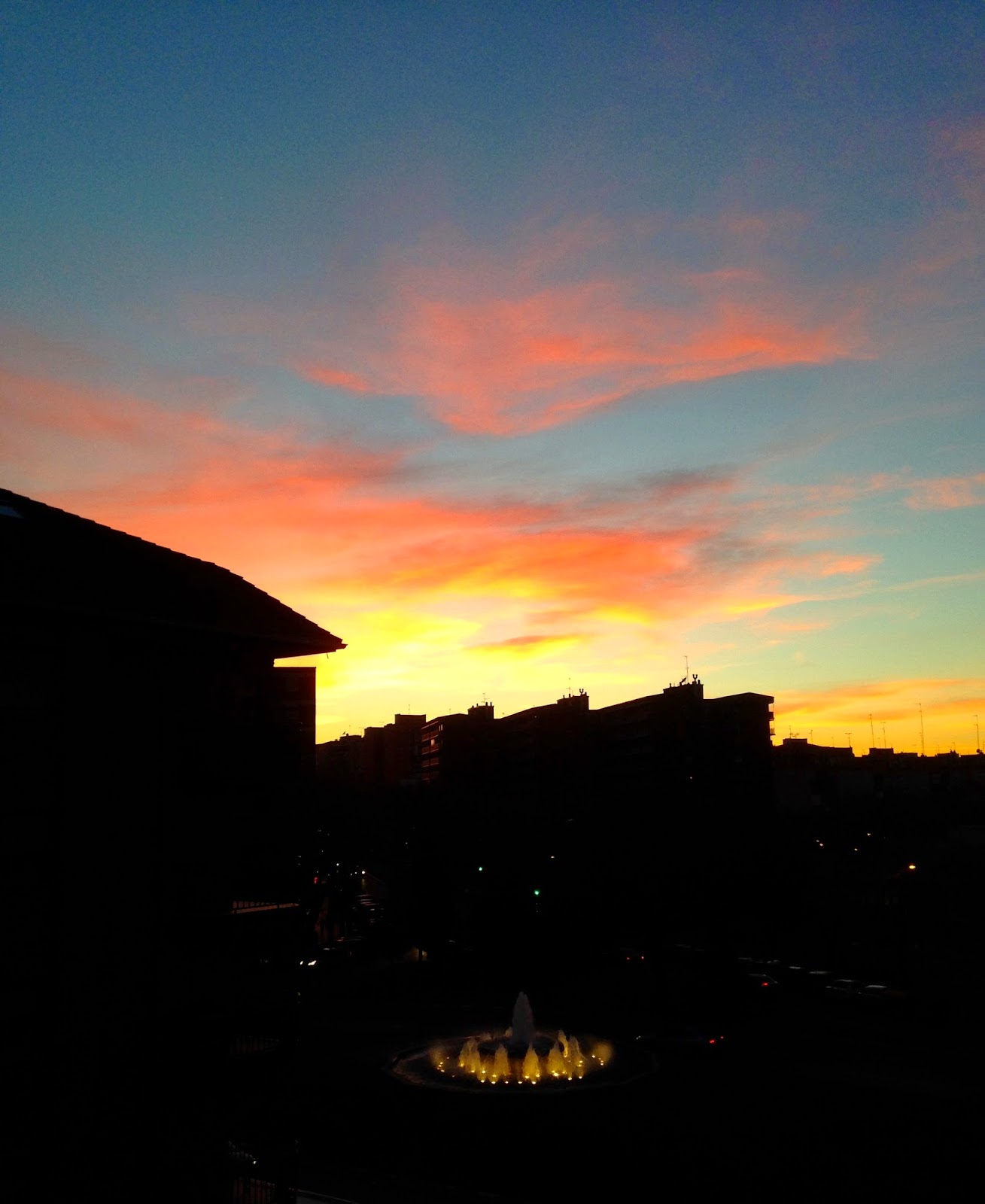 Did I mention already that I'm obsessed with sunsets? I've taken I don't know how many pictures of this particular view. I just love that illuminated fountain with the sunset light. 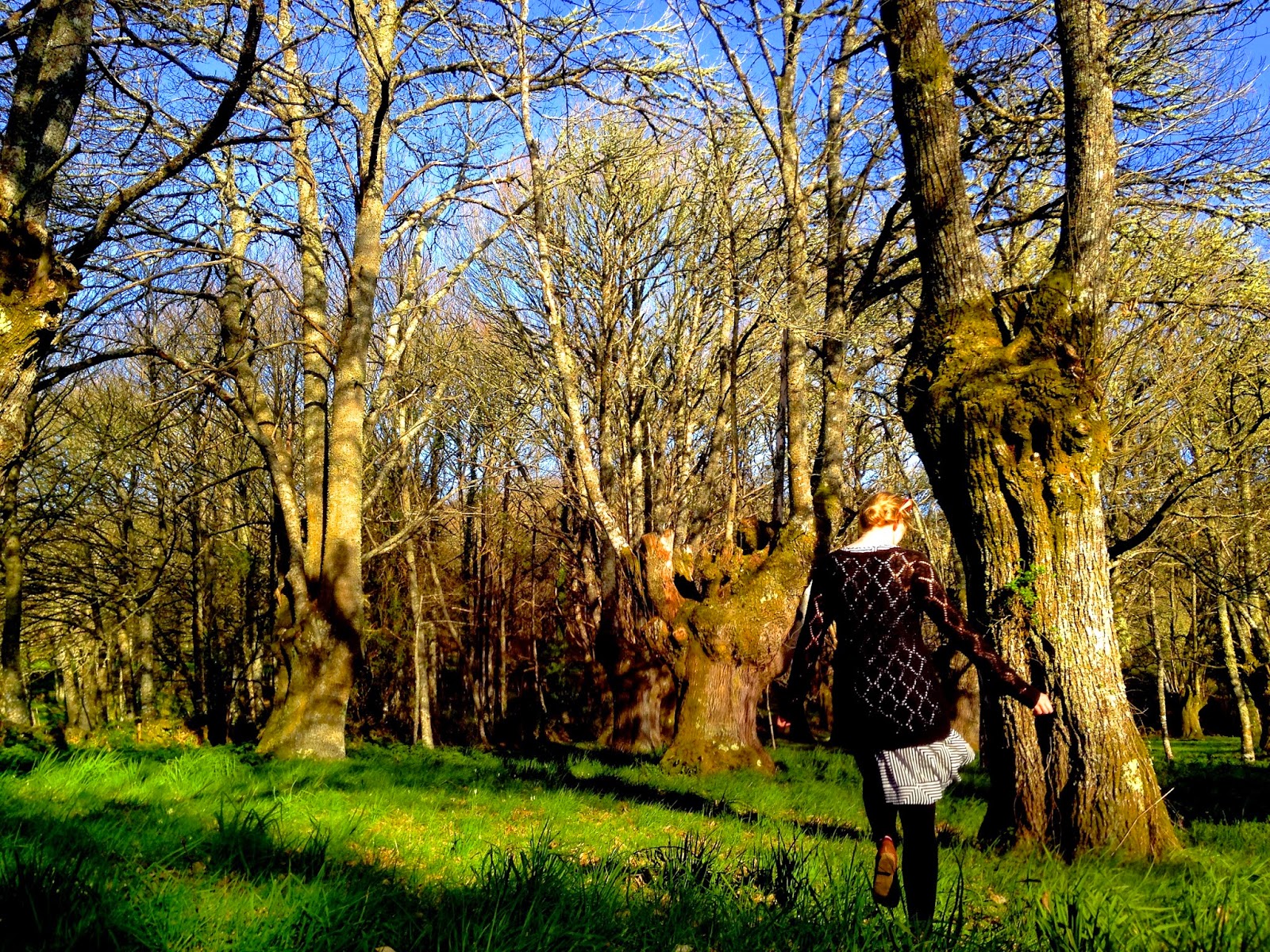 Finally, at the end of March, it came time for a well-deserved spring break. My next post is going to be all about where I went and how I felt about it, but here's a teaser picture. For some of you, it may be just that much easier to guess my destination now!
Posted by Alisa at 12:06 AM