2014 was quite the rollercoaster ride for me! There were a lot of good parts, also some bad ones, and in general I'm happy to see it go and excited to find out what's next. But first...let me remember all the fun adventures I got up to! 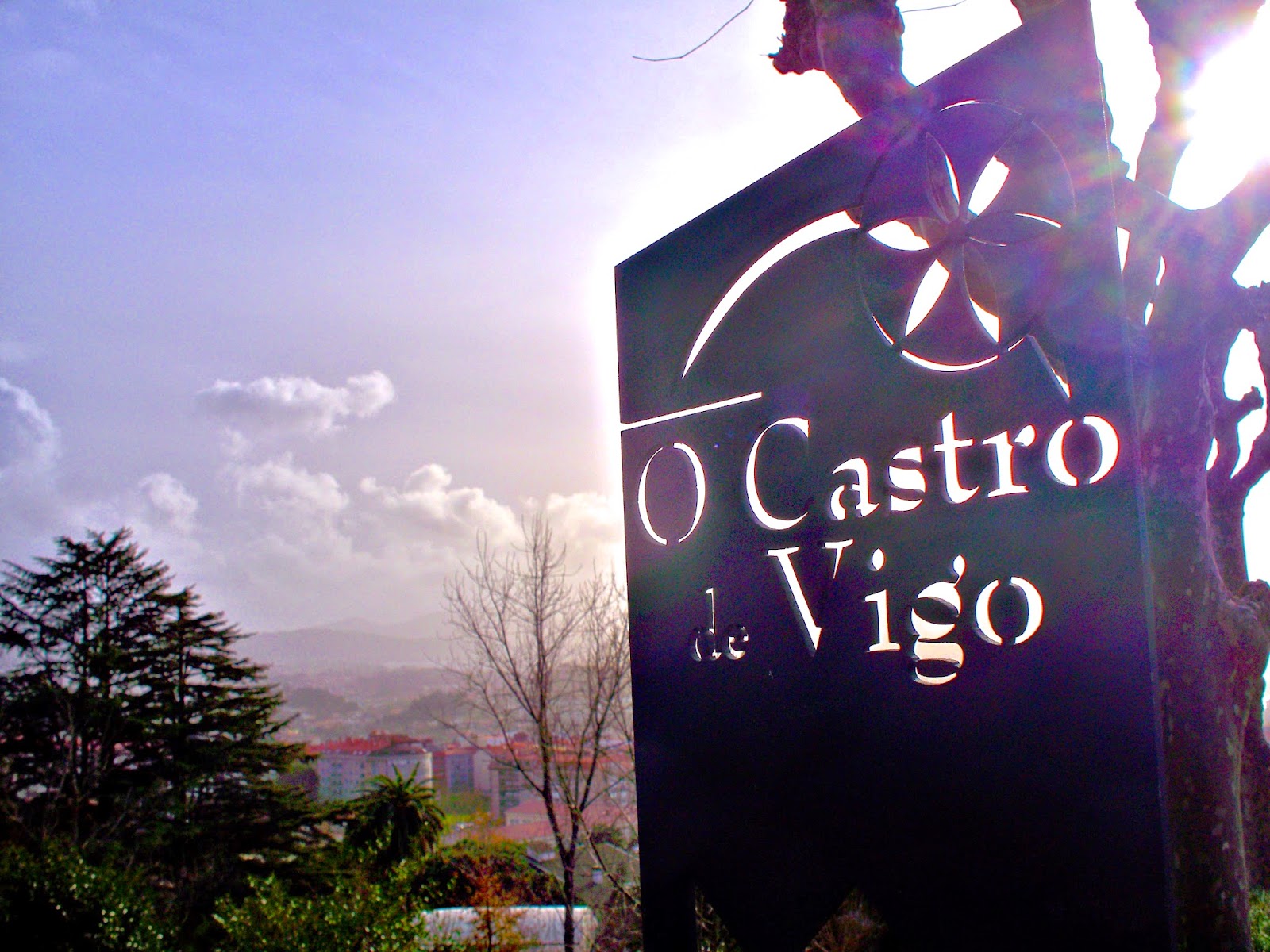 I started out 2014 visiting some of my best friends from Vigo. I enjoyed seeing them again, as well as revisiting all my favorite spots in the city, like O Castro (the park on top of the hill in the downtown, with the BEST views). 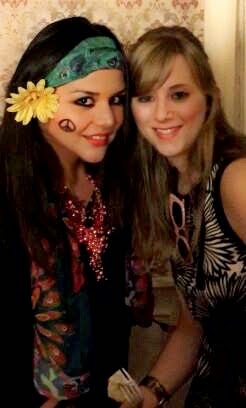 Next up was my birthday! I celebrated a few times, first in Vigo and then in France, where I had a 1960's-themed birthday party! (Thanks for the picture, A) 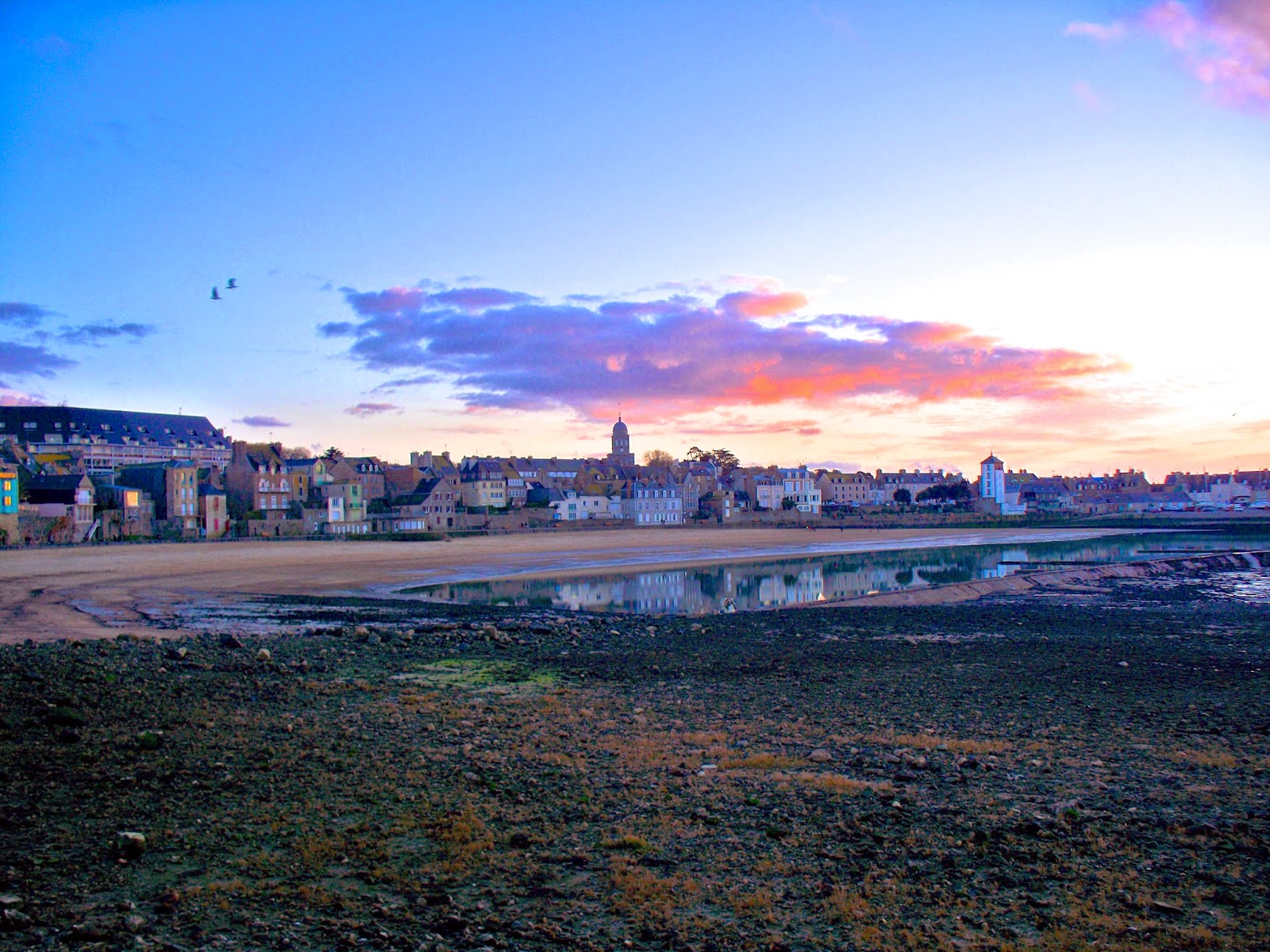 After all the excitement of the holidays was over, I was feeling a little bummed, so I tried to really appreciate the beauty in my everyday surroundings in order to cheer myself up. This photo is of the area of town I where I used to live in St. Malo, and this walk was one I took quite frequently, as it was the way to get to Intra-Muros, or the walled city, where all the exciting things happened! 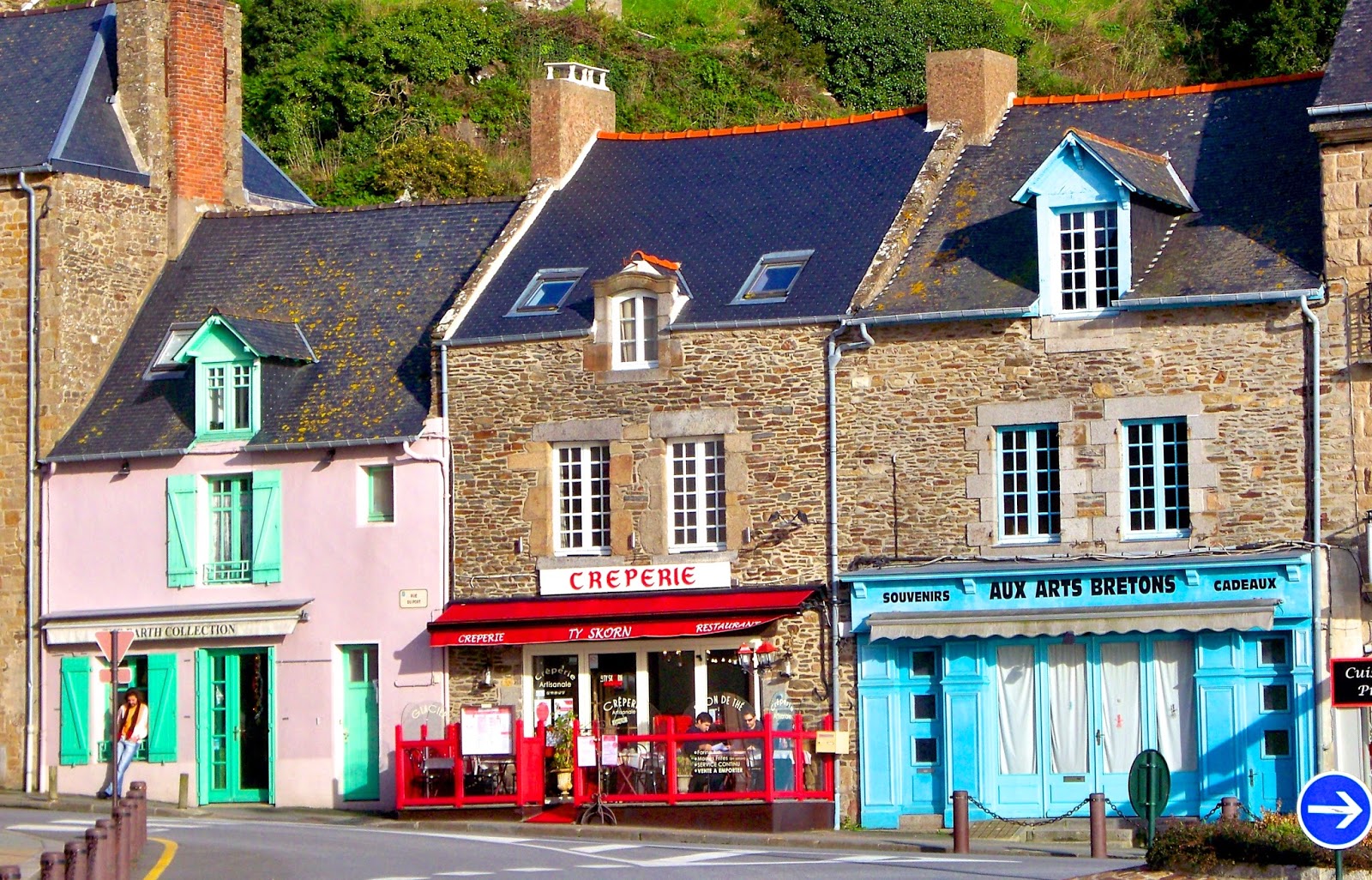 Still appreciating the beauty of the ordinary, one day I took a daytrip to a town nearby called Cancale, where they have the best oysters. They also have those typical Breton buildings with the colorful entrances that I love so much! 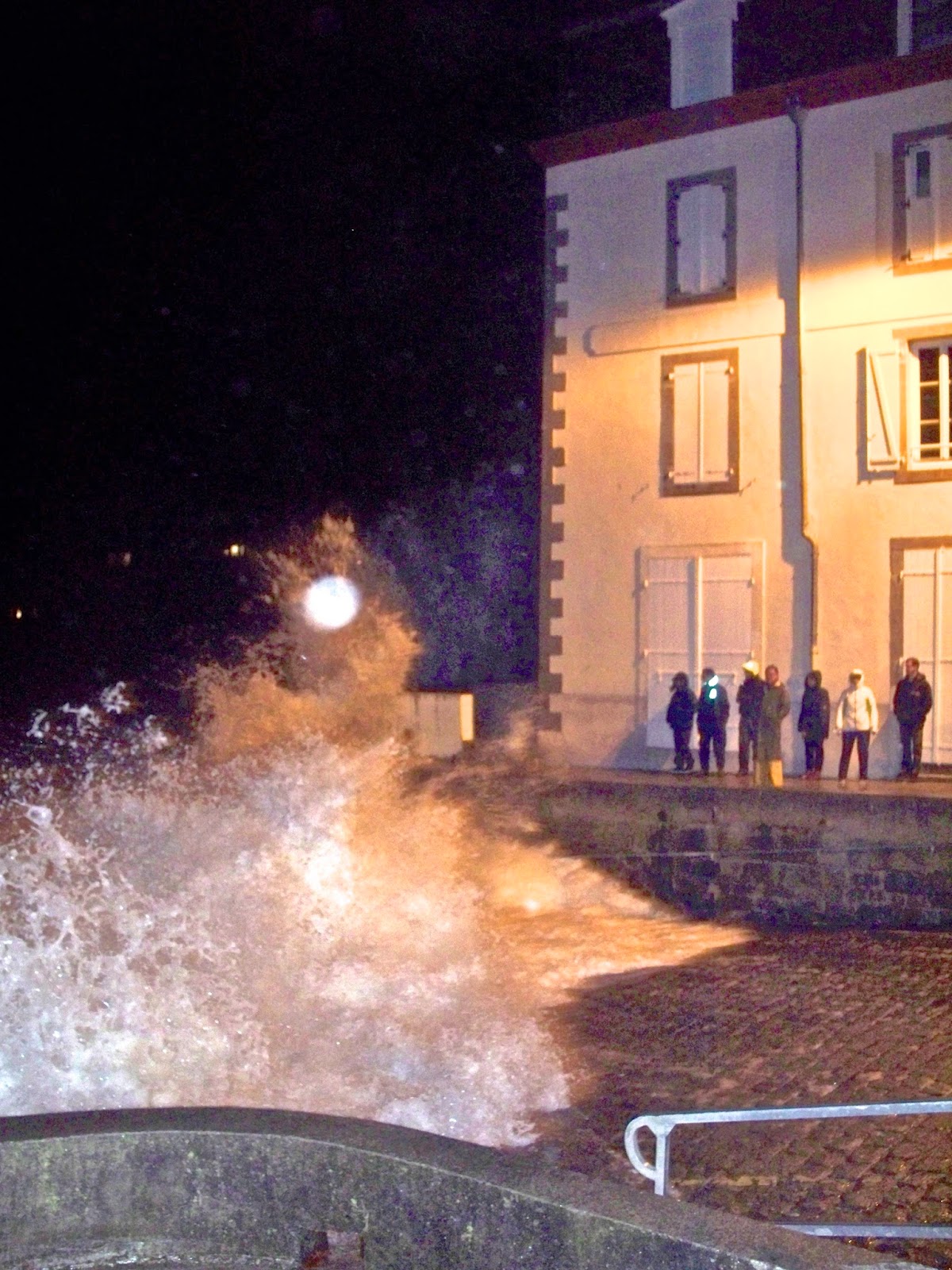 February started out with a bang, as we watched the grandes vagues (big waves) come into St. Malo. This only happens once every few months, where the tides and the moon cycles coincide to bring huge waves crashing against the sides of buildings. It was really impressive, and I loved it until a big wave hit me and I got totally soaked!

As I was learning about Breton culture, I (obviously) also heard a lot about their food. The most famous (and arguably the best) food that comes from this region is crêpes and galettes (salty crêpes). But the Bretons, they are obsessed with (salty) butter. So, the sign says: J'aime la galette...savez-vous comment...? Quand elle est bien faite...avec du beurre dedans! (I love galettes...do you know how? When they're well-made...with some butter inside!) 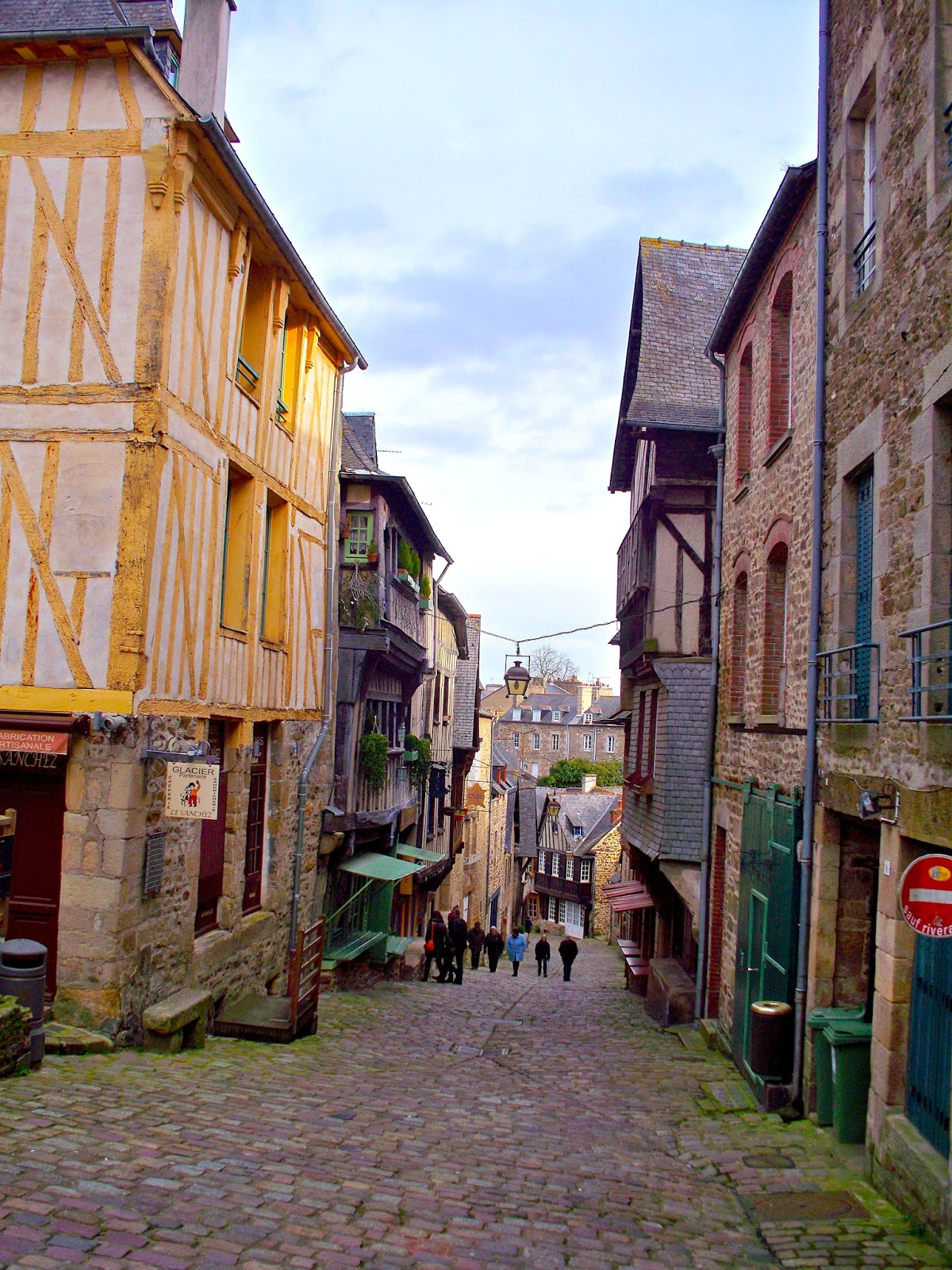 I took a few daytrips in February to combat my continuing moodiness, and one of them was to Dinan with my roommates. It was a beautiful day with some of my favorite girls, and I absolutely adored the town. A lot of the reason had to do with the colorful buildings. I'm obsessed! 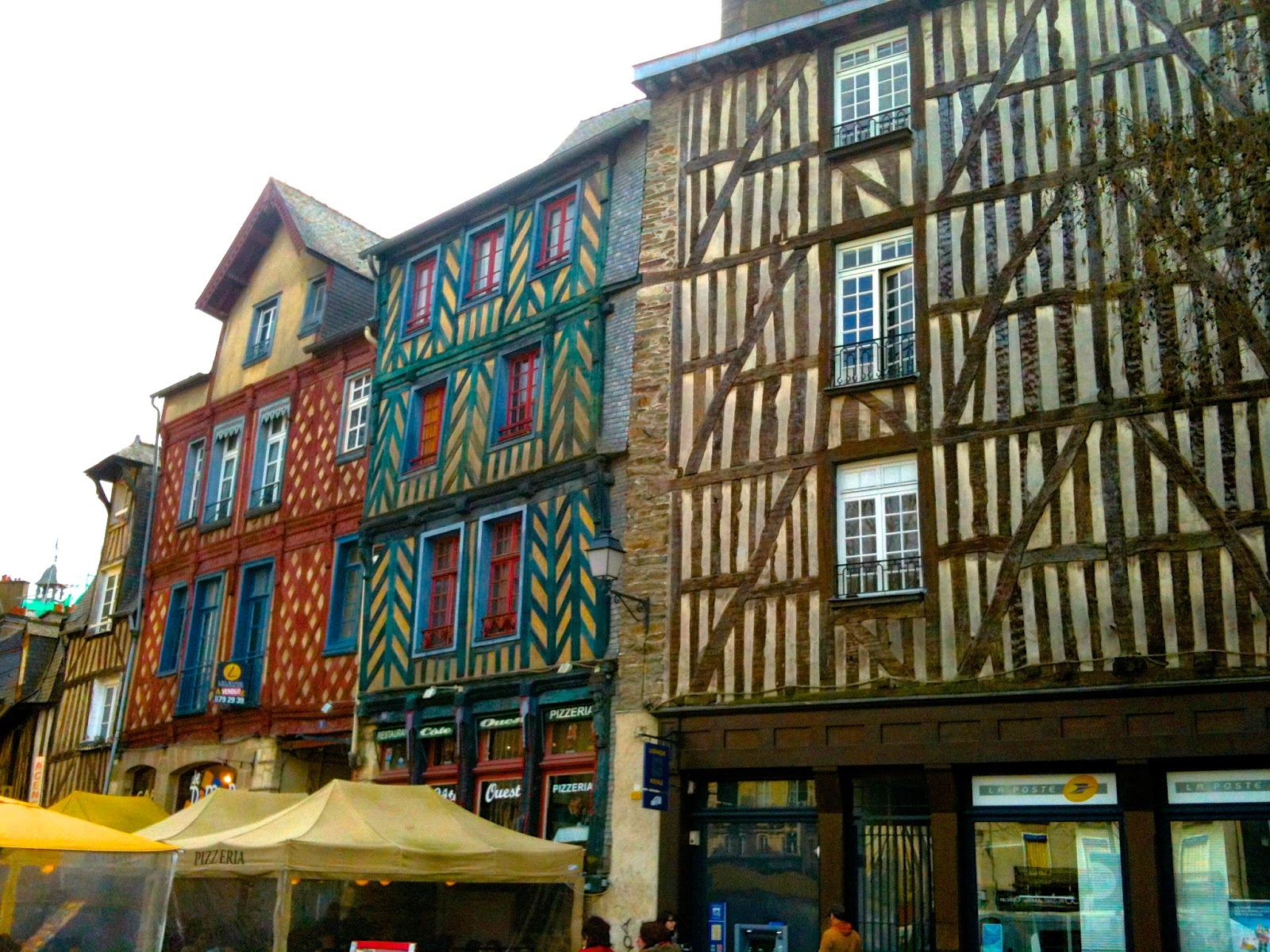 Next up was a daytrip to Rennes, the capital of Brittany. Some of my favorite-ever and most-photographed colorful wooden buildings are there, so I'm always pleased to make a visit to them! 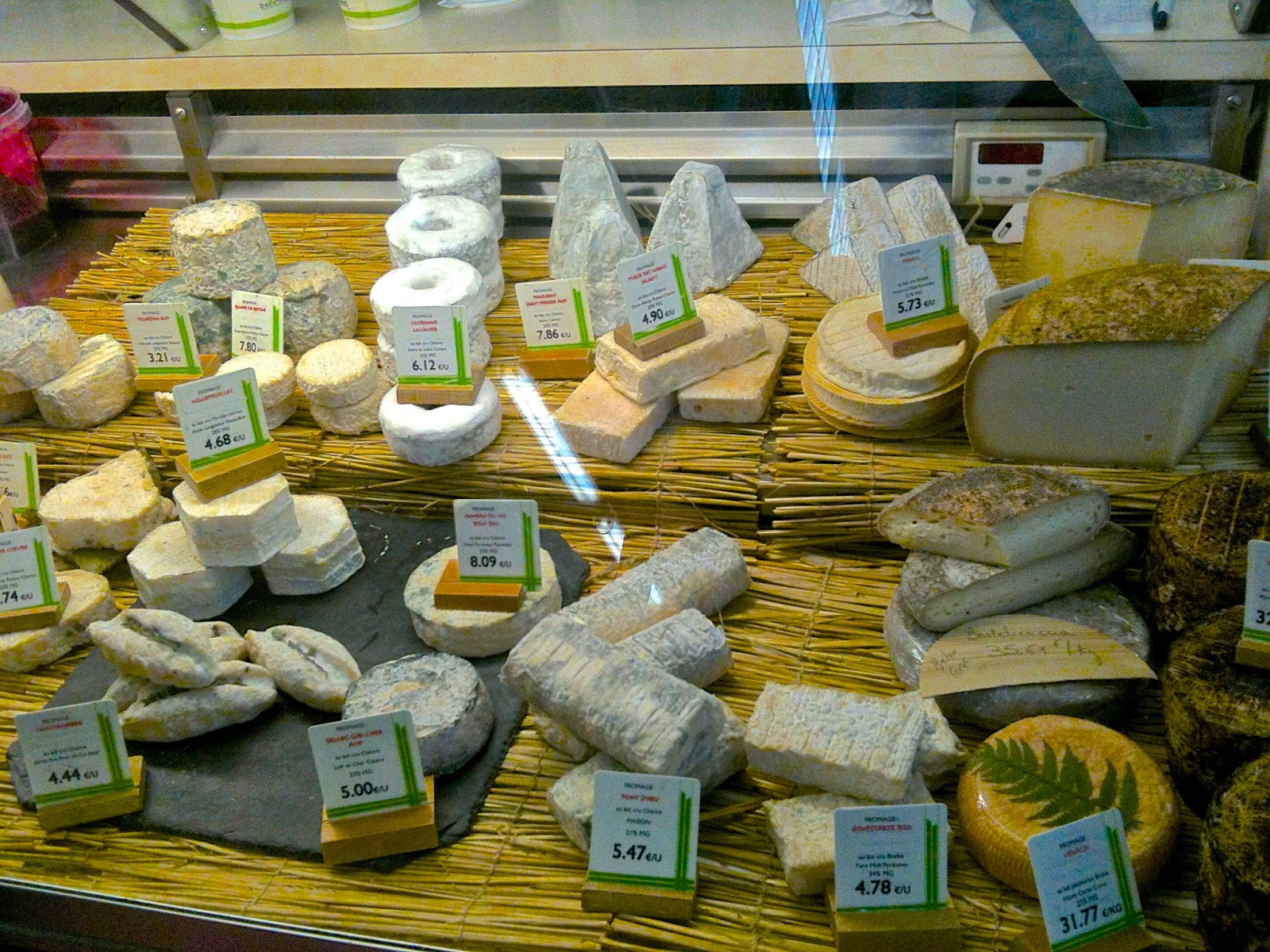 On this particular daytrip, we also visited a French market, which is something else I love...fresh food all put out for display (and sometimes taste-testing!)...such a wonderful concept. And everyone knows how the French love their cheese...well, I love getting to try all the different types! 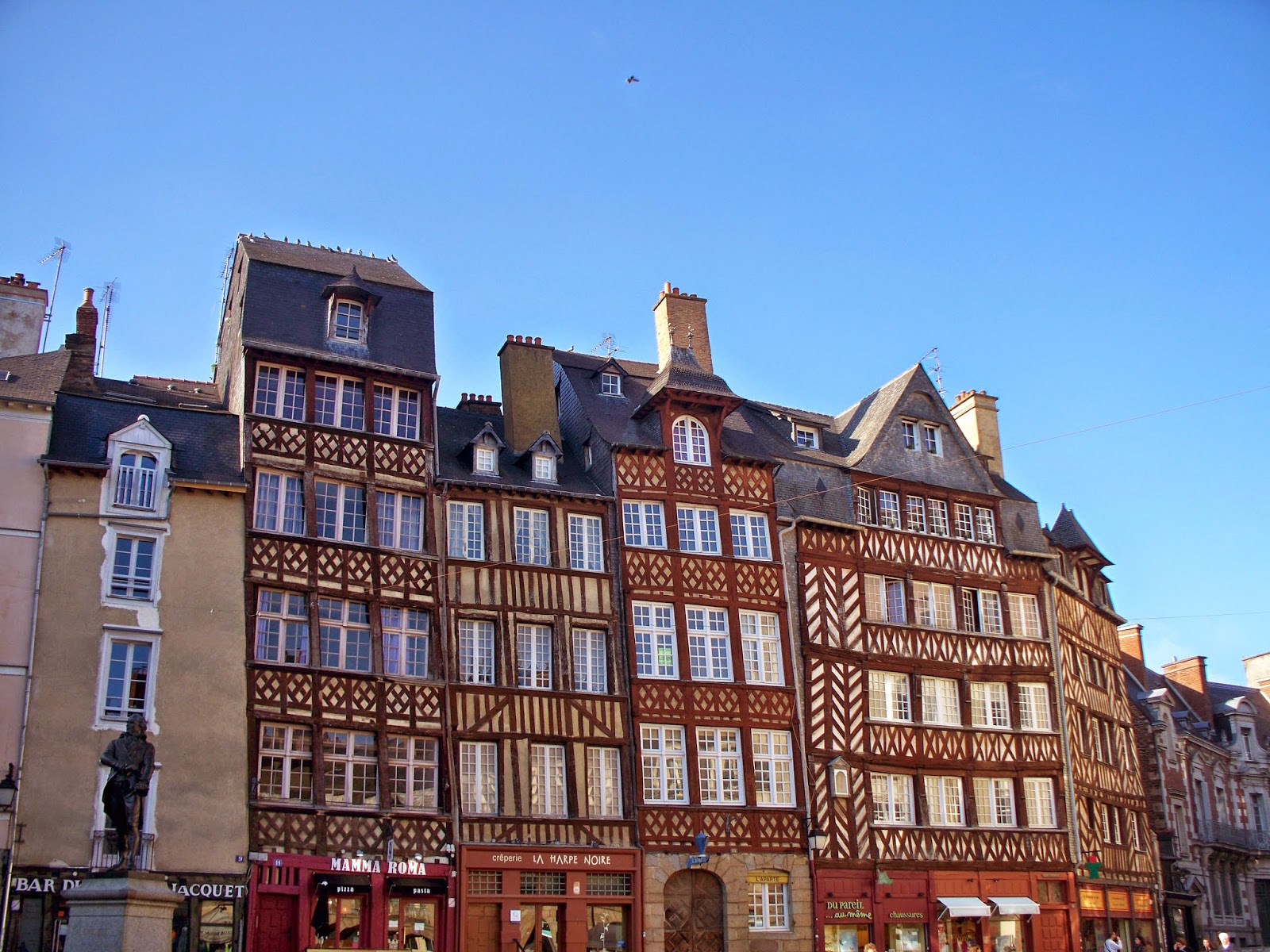 In the beginning of March, we had 2 weeks of vacation (because French schools give you 2 weeks off for every 6 weeks worked...so lux!). However, I decided to get some extra cash by working at an English camp in Rennes for the first week. I hated the commute, but I loved getting to explore more of a city I love so well! And yes, more wooden buildings! 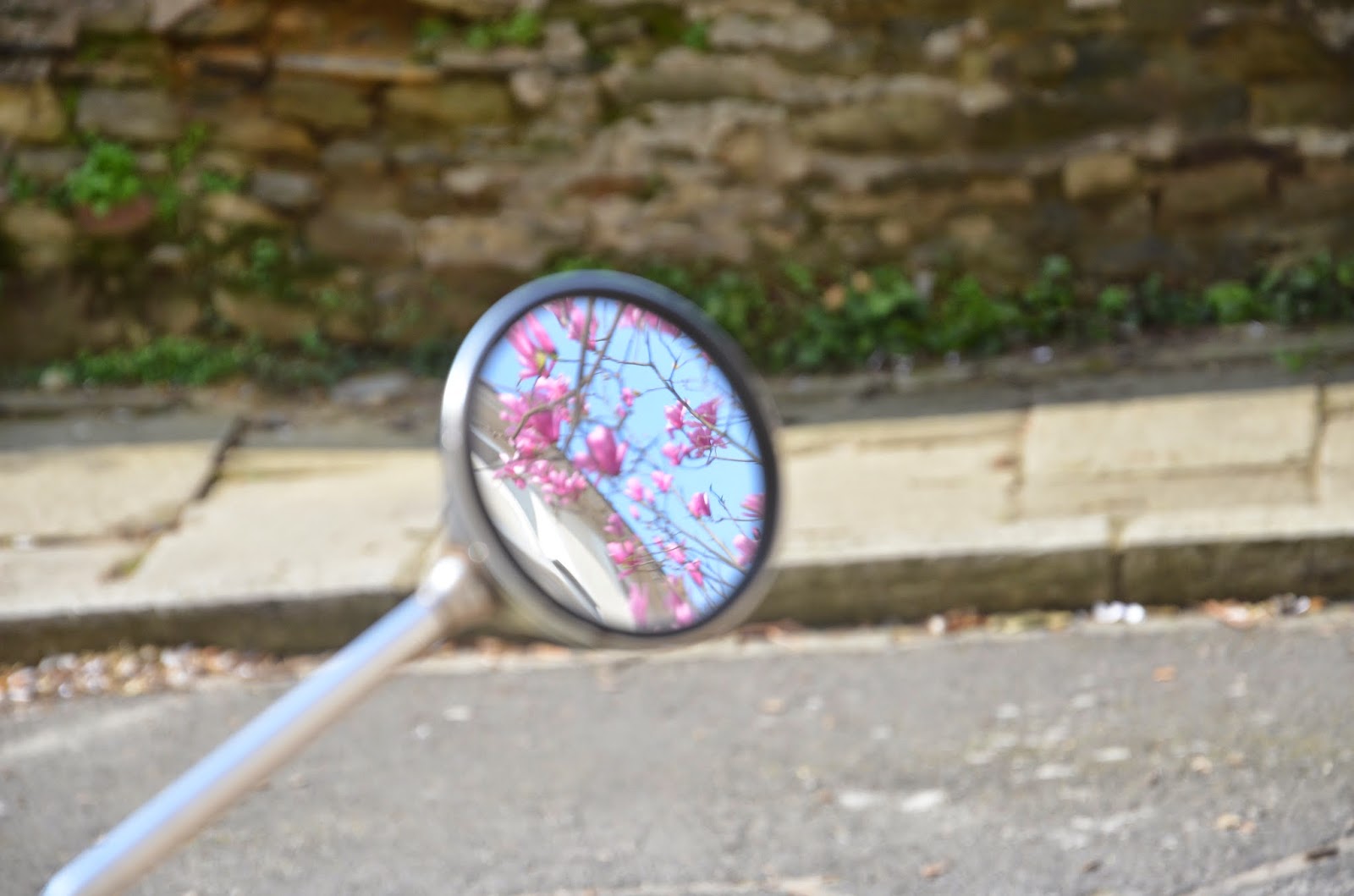 A friend of mine had recently gotten a cool fancy camera, so in March he let me play a little with it and I started learning how to take interesting pictures, which was awesome. Except now I want my own expensive fun camera, waaah. 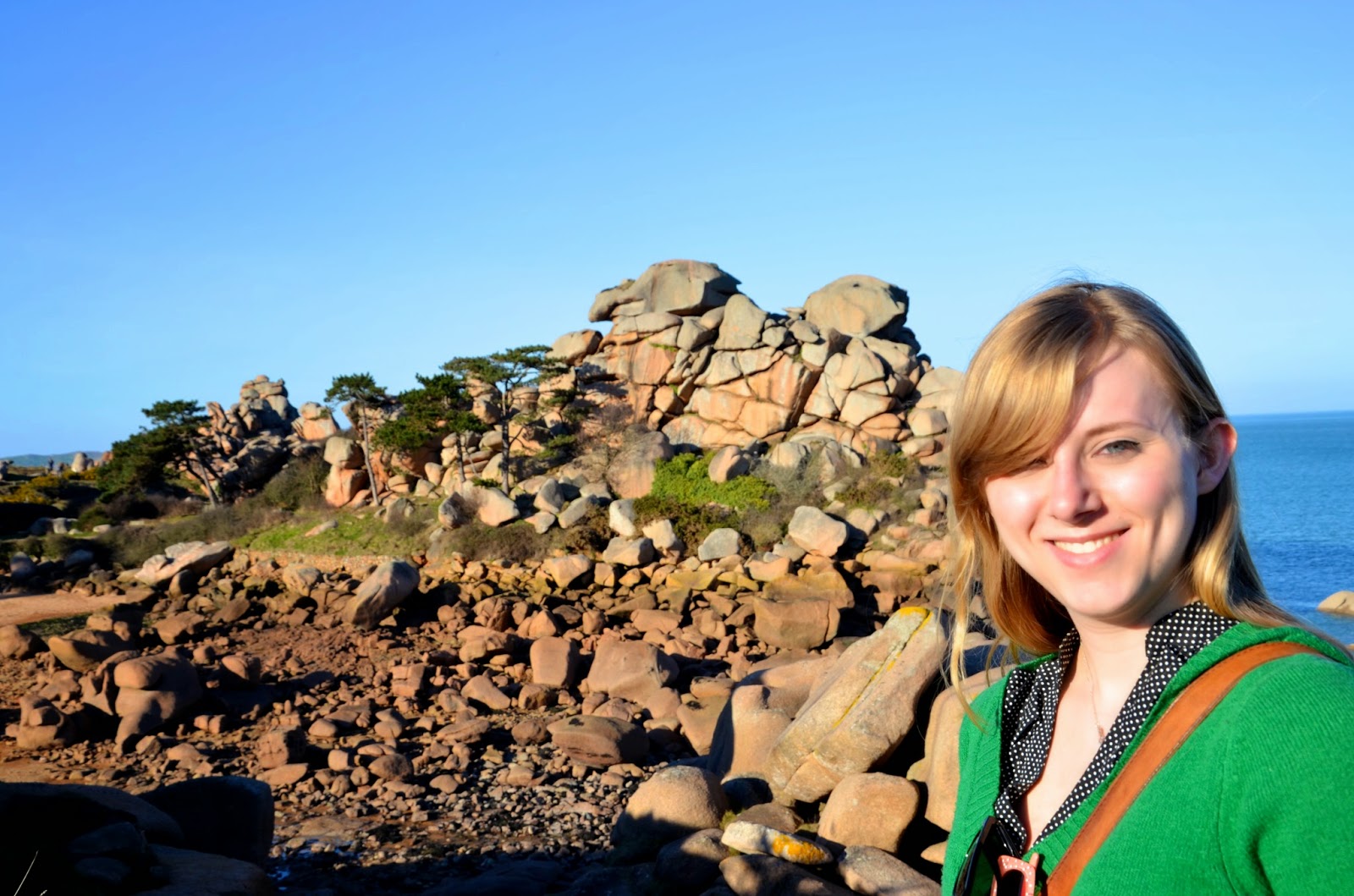 Another day trip was next up, this time to Perros-Guirec on the northern coast of Brittany. This place is famous for its pink granite rocks, which we took a nice walk along. (Thanks F for the picture!) 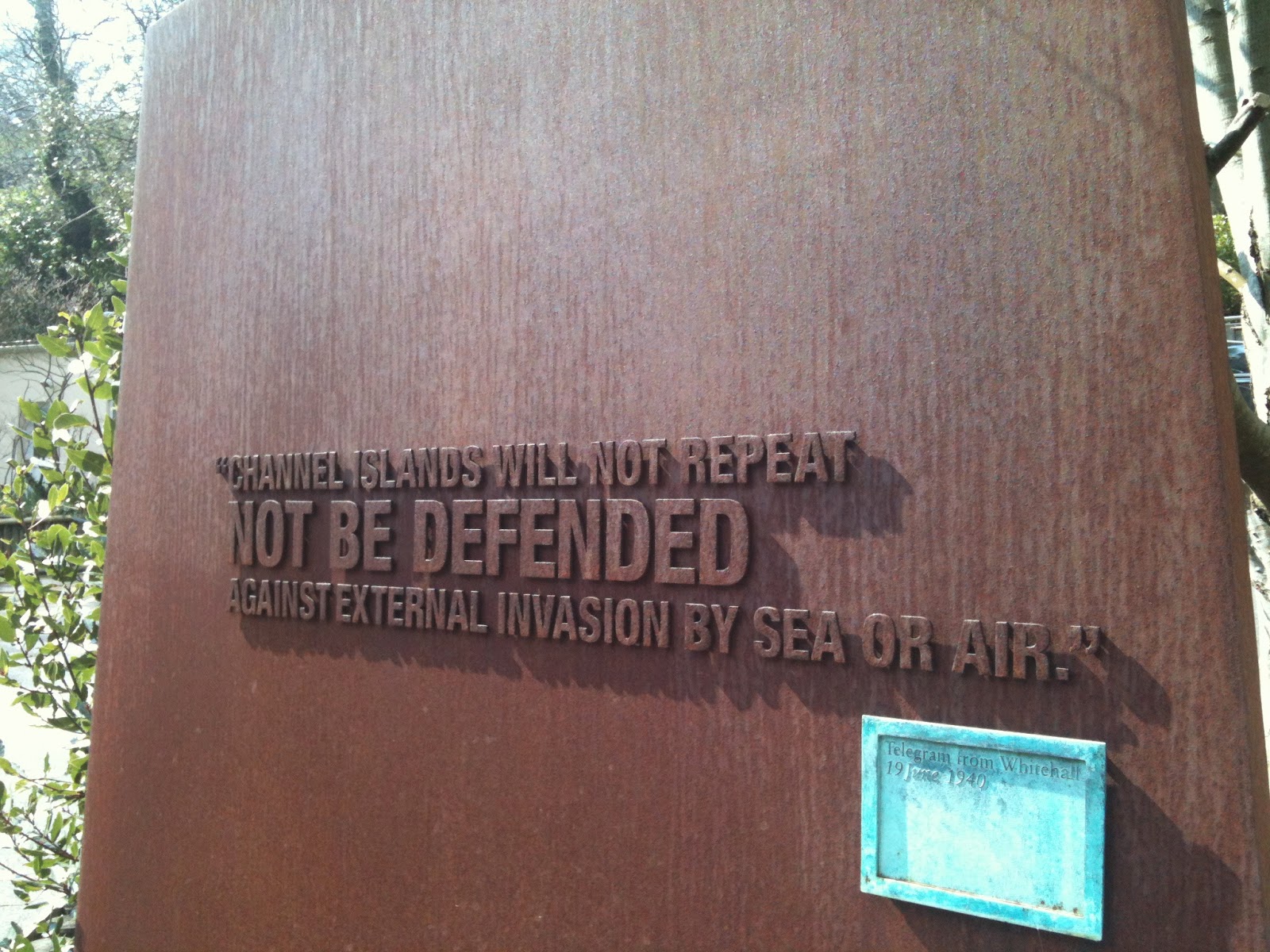 Towards the end of March, one of my seconde classes at the high school I was working in took a field trip to Jersey, a British island off the coast of France, and I got invited along! That was a cool trip because I had to partially work as translator while we visited their parliament, and also we visited this super interesting cave hospital from WWII that explained all about the Nazi occupation of the Channel Islands during the war (betcha didn't know that a small part of Britain had been taken over by Nazis, didja?). 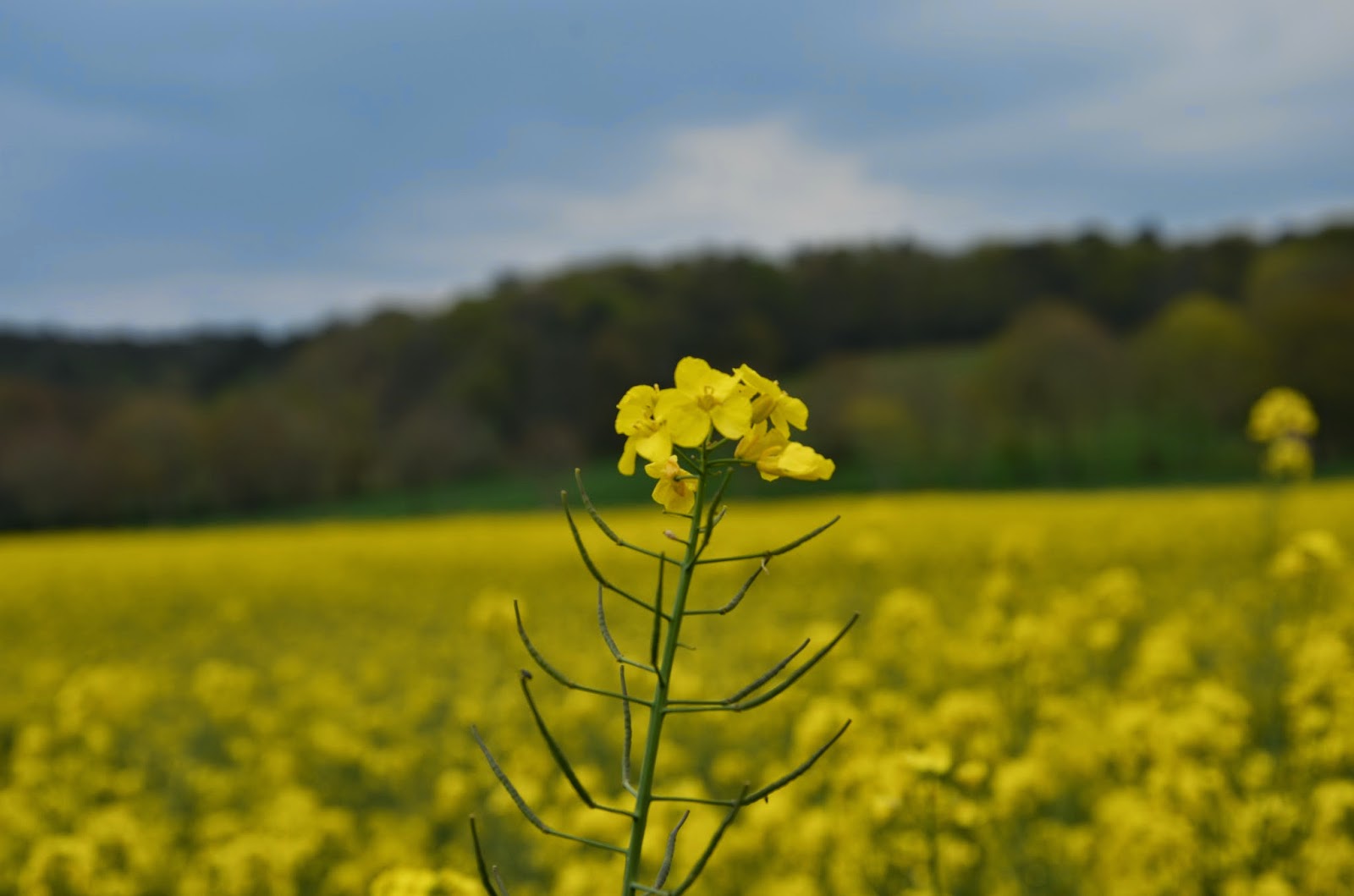 April was absolutely full of daytrips. During a visit to the Forest of Brocéliande, where Merlin supposedly lived and King Arthur may have pulled his sword out of a lake, I was very impressed with all the rapeseed fields in bloom, which made huge patches of the countryside yellow!

The next trip was to Carnac, to see the menhirs left behind by prehistoric people thousands of years ago. I was so amazed by this place, with hundreds of giant boulders lined up for miles. I can't begin to imagine how much work that must have taken for these ancient people. And I also love pondering the mystery of why... 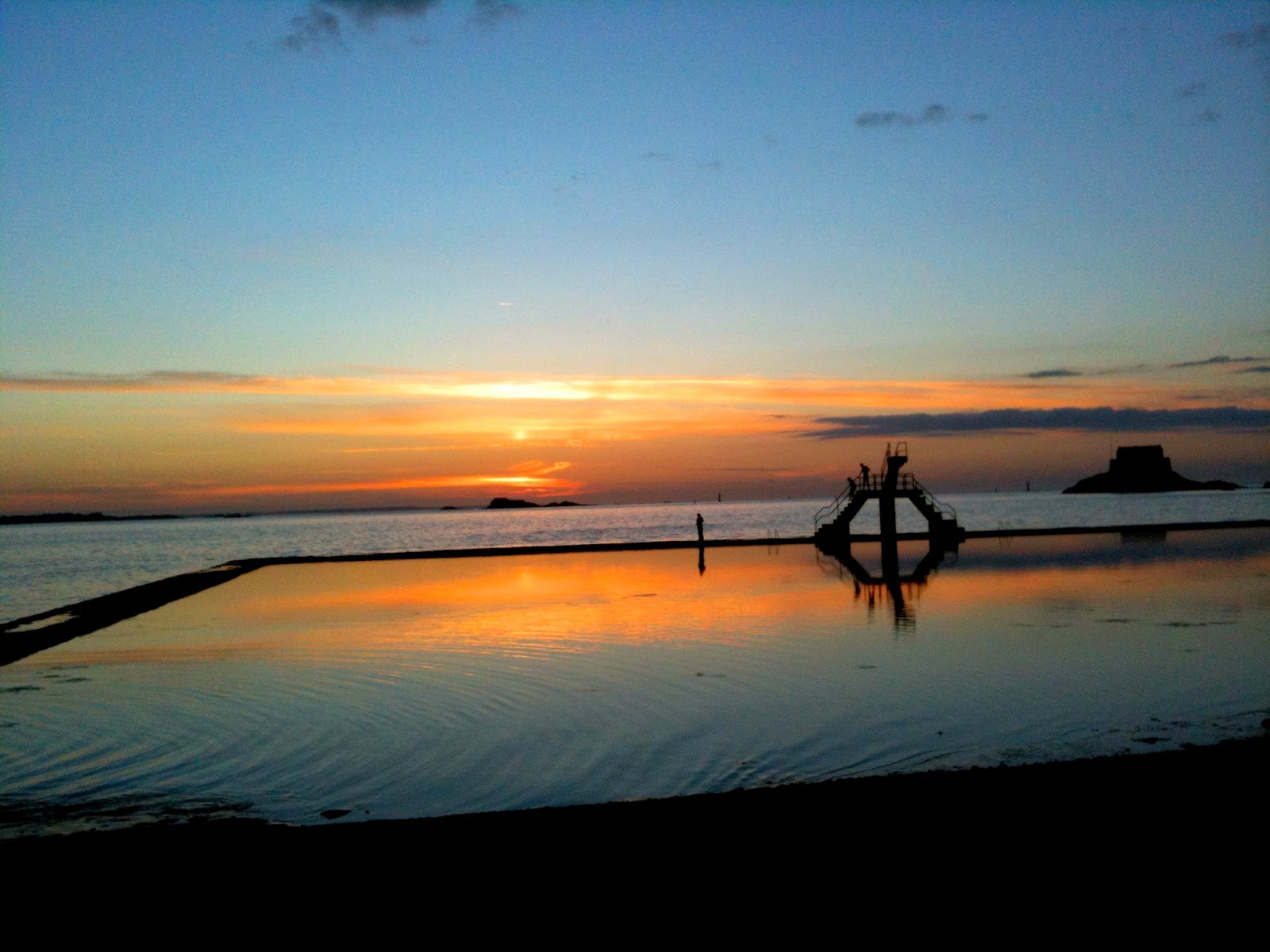 April was also a bit strange because it was already time to start saying goodbye to people. My work contract finished at the end of the month, and so we had various meetings on the beach to celebrate and see people one last time before they started taking off! This is from one such celebration, in front of the marine swimming pool in St. Malo. 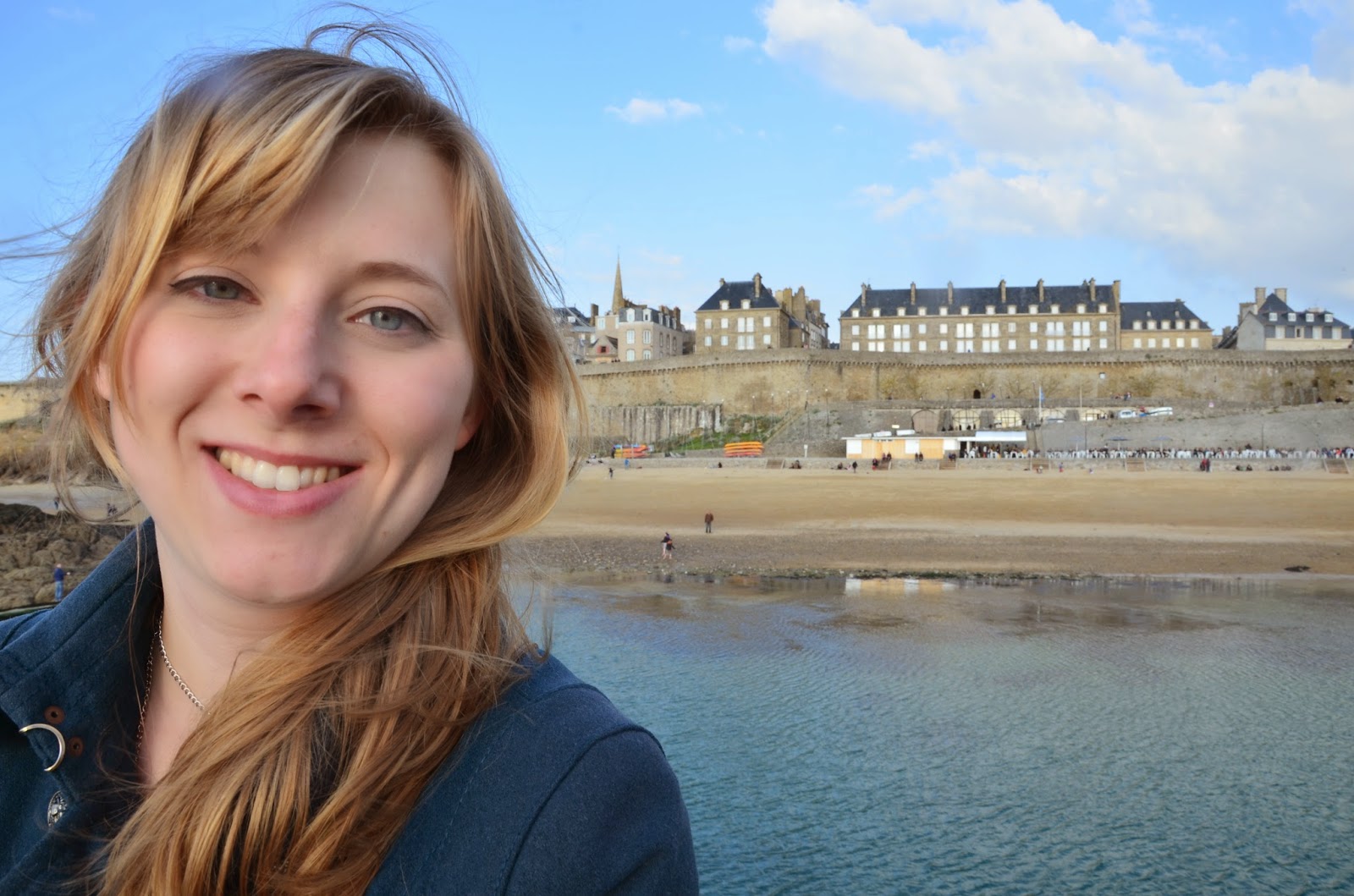 I also tried to spend some time really exploring St. Malo better, because I knew that it would soon be time for my departure as well. So I walked out to the nearby islands one day when the tide was low, I explored the Cité d'Alet (the first place settled in the area), and I generally just tried to take it all in. I was mostly pleased to be finished working at my technical high school, not because it was the worst job in the world, but because I am well aware that it was not the best fit for me professionally! So getting to the end of April was kind of a relief for me in at least one way. 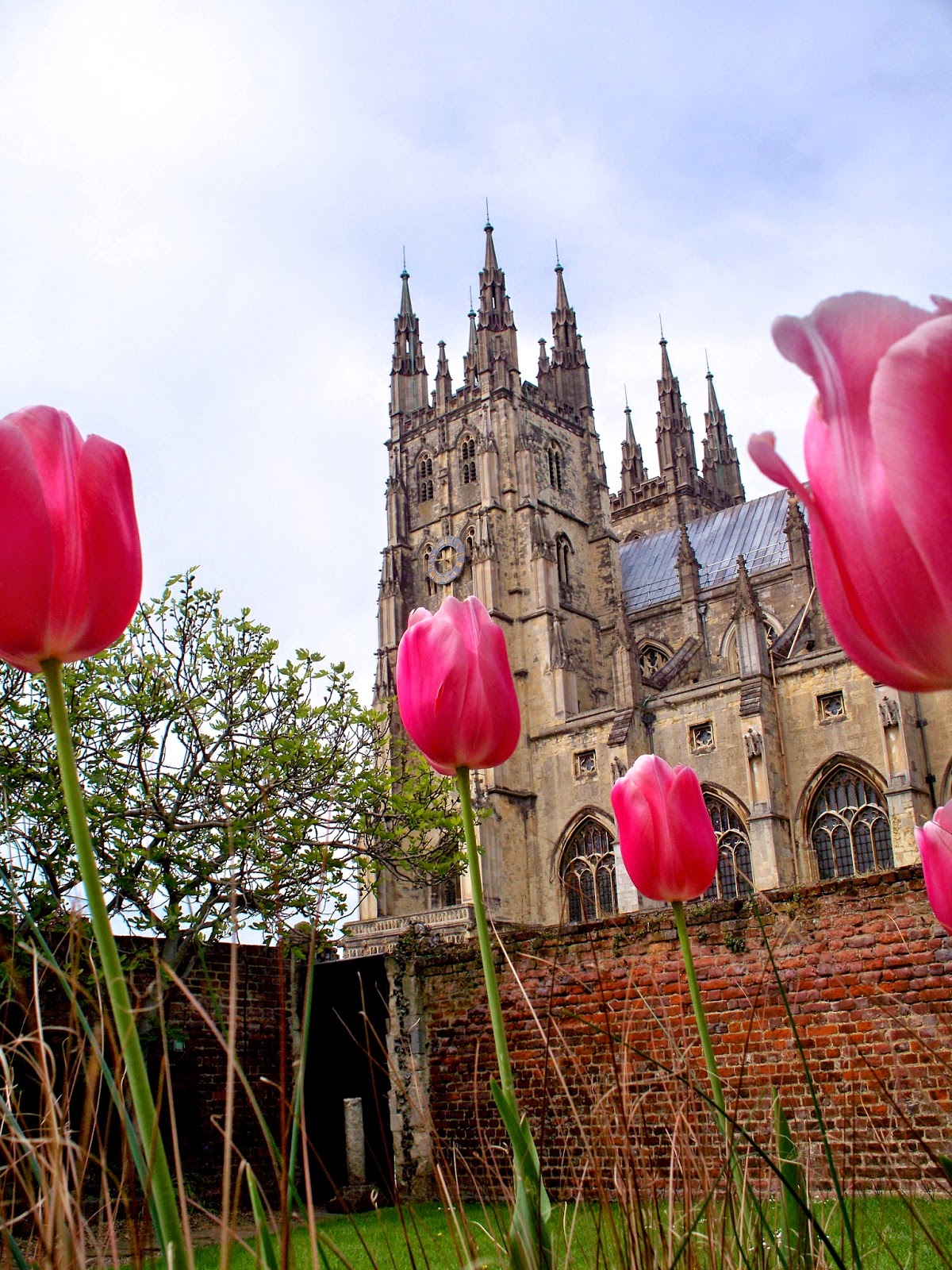 As soon as May came, I was off on a 3-week vacation with my parents! I met them in London, and we explored such historic sites as Canturbury, the destination of the famous pilgrimage that brought us Chaucer's Canterbury Tales! 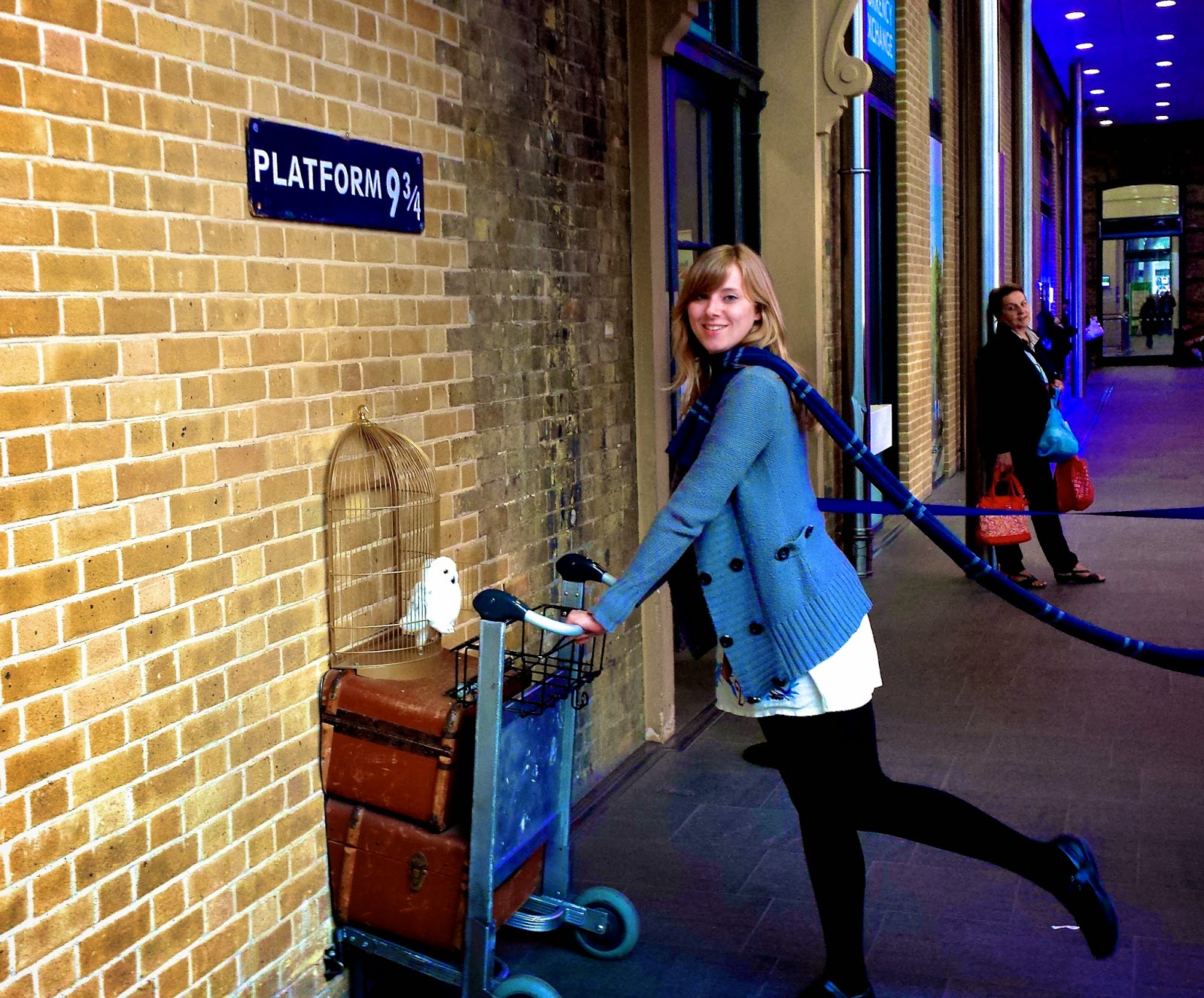 You can't take a bookworm to London without stopping at Platform 9 3/4! 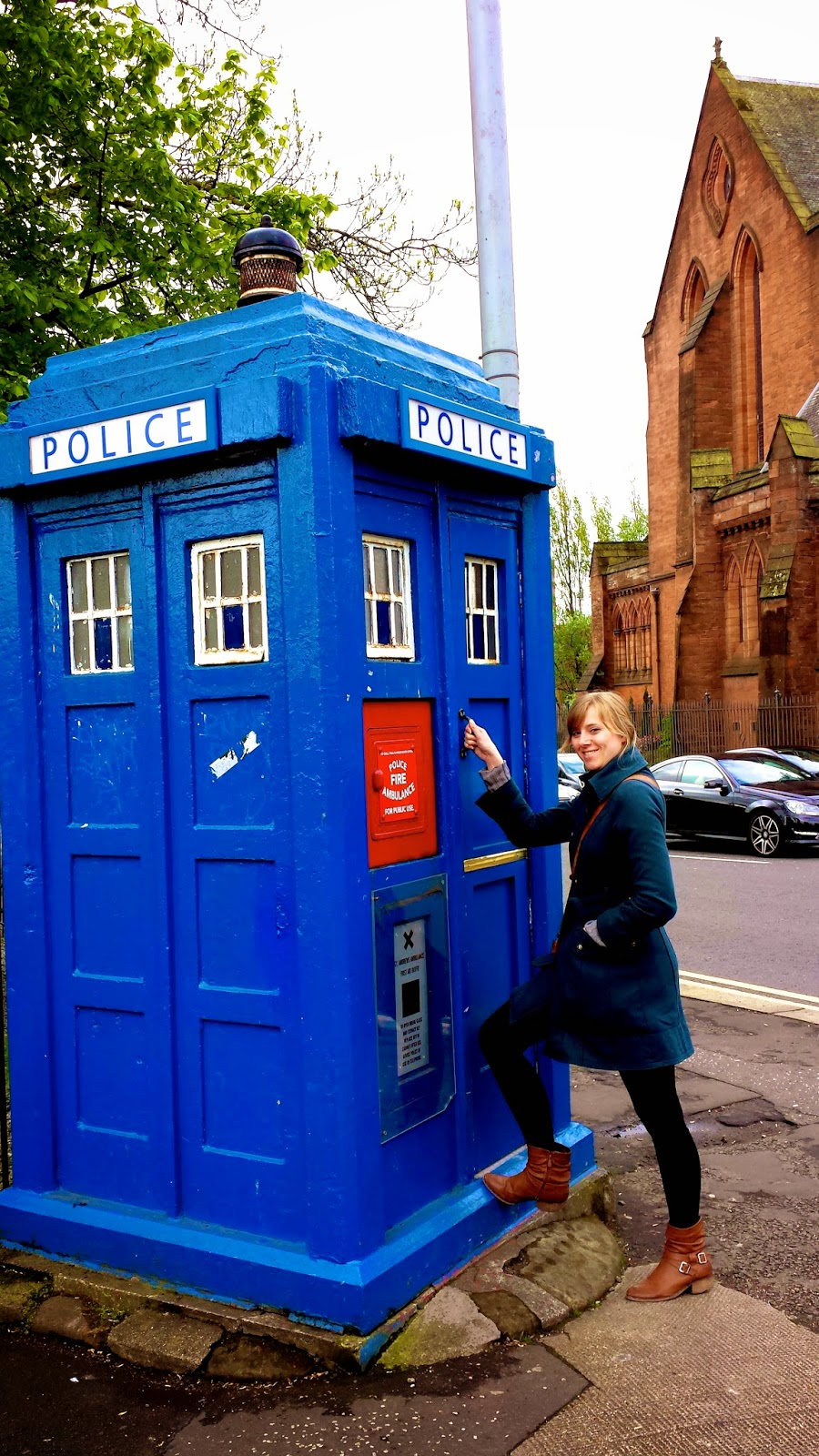 Then we were off to Scotland, where my nerdy self was thrilled to see actual blue police boxes that look exactly like the TARDIS... 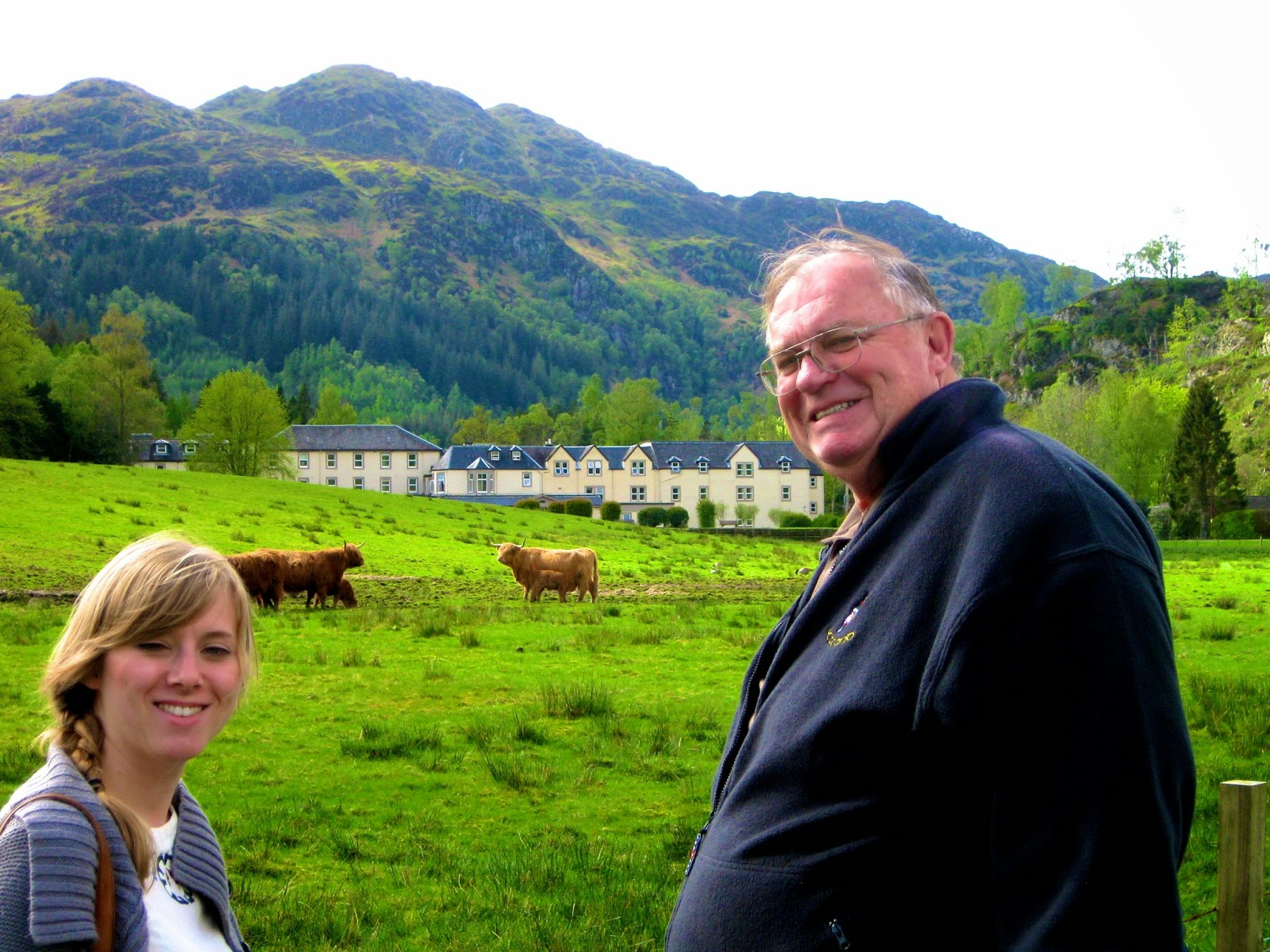 We did a highland tour, and were amused by some hairy highland coos (cows, for all of you non-Scottish burr speakers out there). 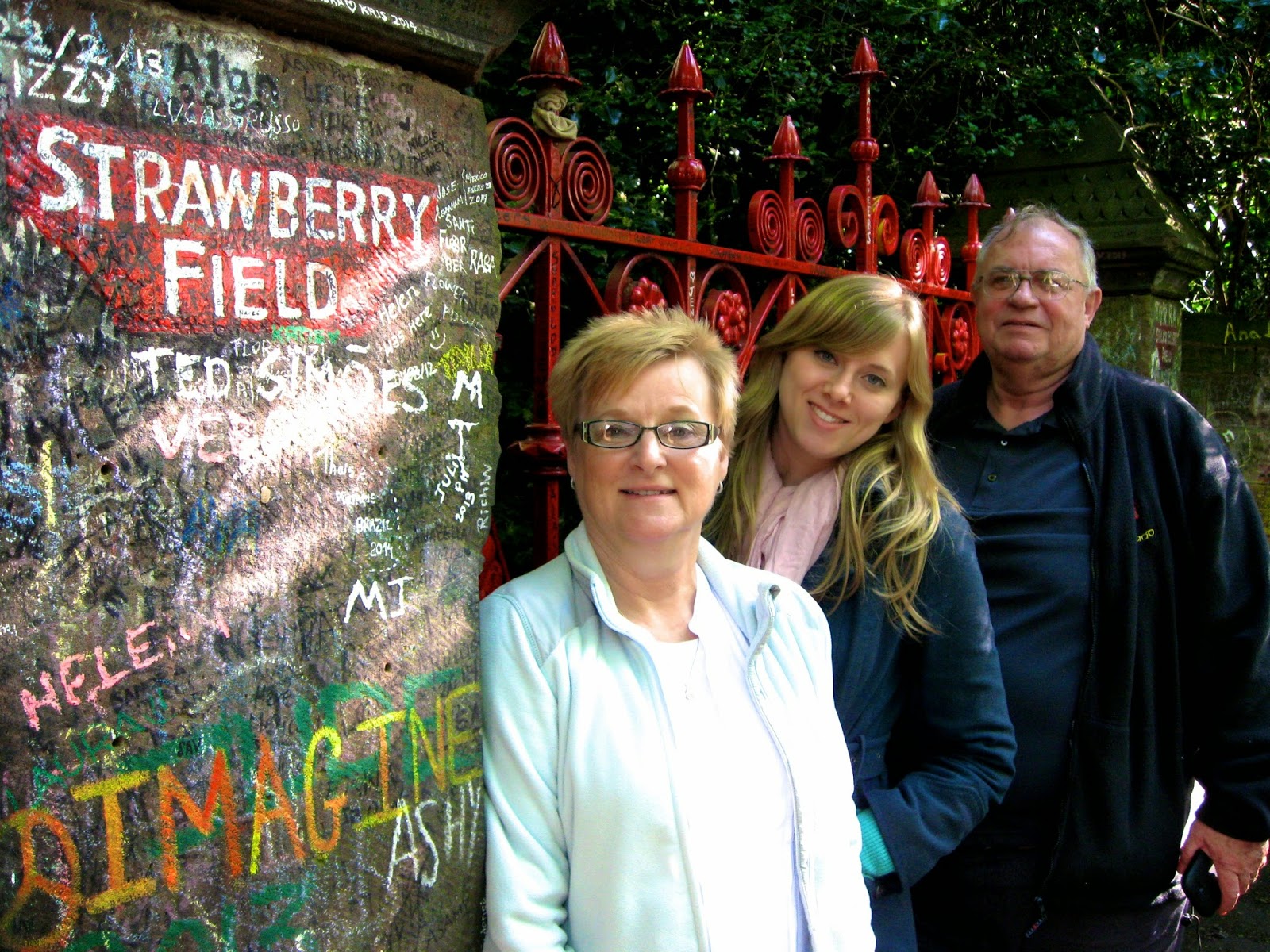 In Liverpool, we took a Beatles taxi tour, which was well-worth our money, as we got a full history of each of the Beatles' lives and landmarks in Liverpool, as well as a picture in front of every single one! I'm obsessed with the Beatles, and this was really a thrill for me. Here's Strawberry Field orphanage, like from the (Lennon) song Strawberry Fields Forever... 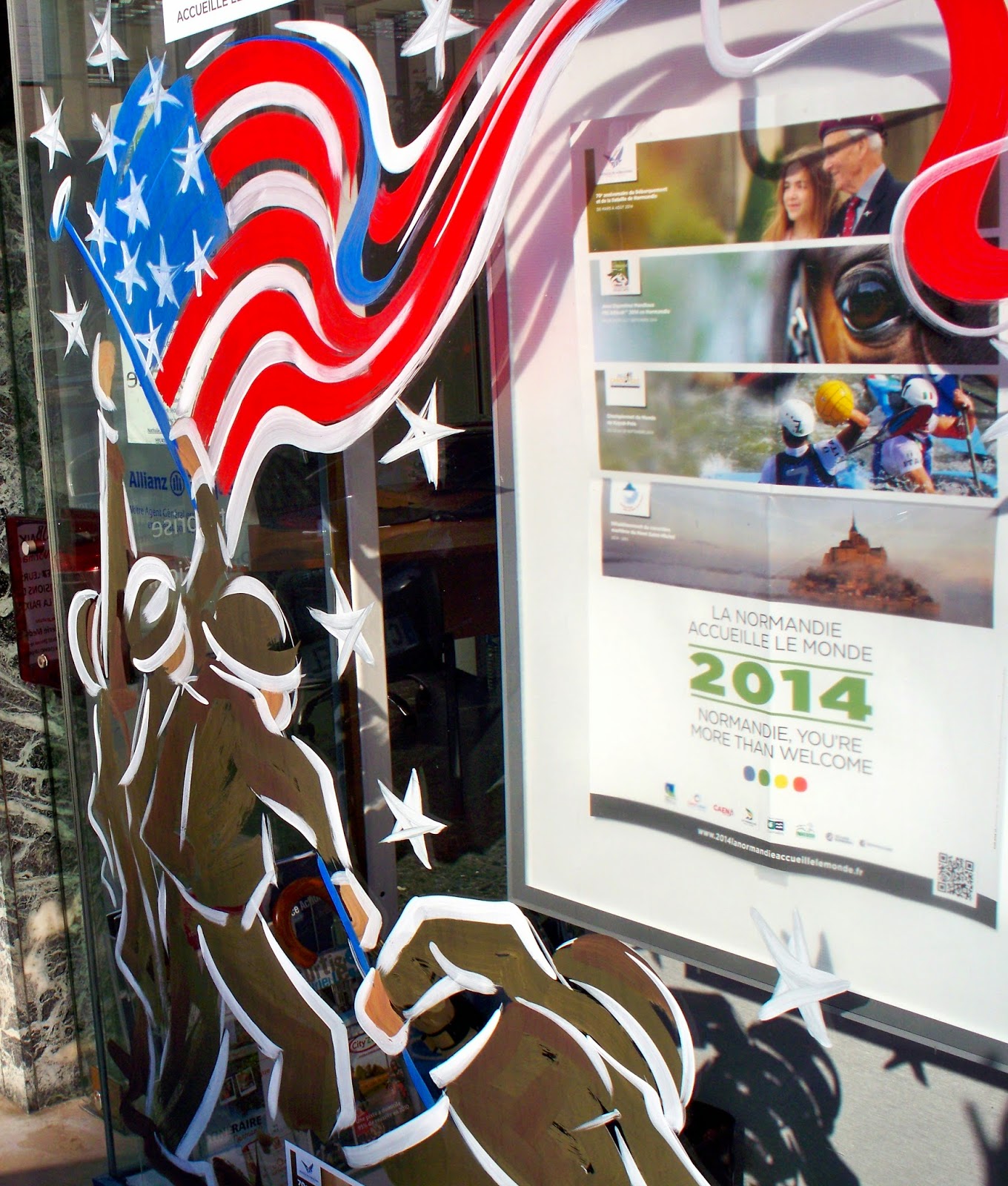 When we took the ferry back to France, our first stop was in Normandy, to see the American cemetery and the beaches where so many men gave their lives during D-Day. As we were there just before the 70th anniversary celebrations, many of the towns were totally decked out! 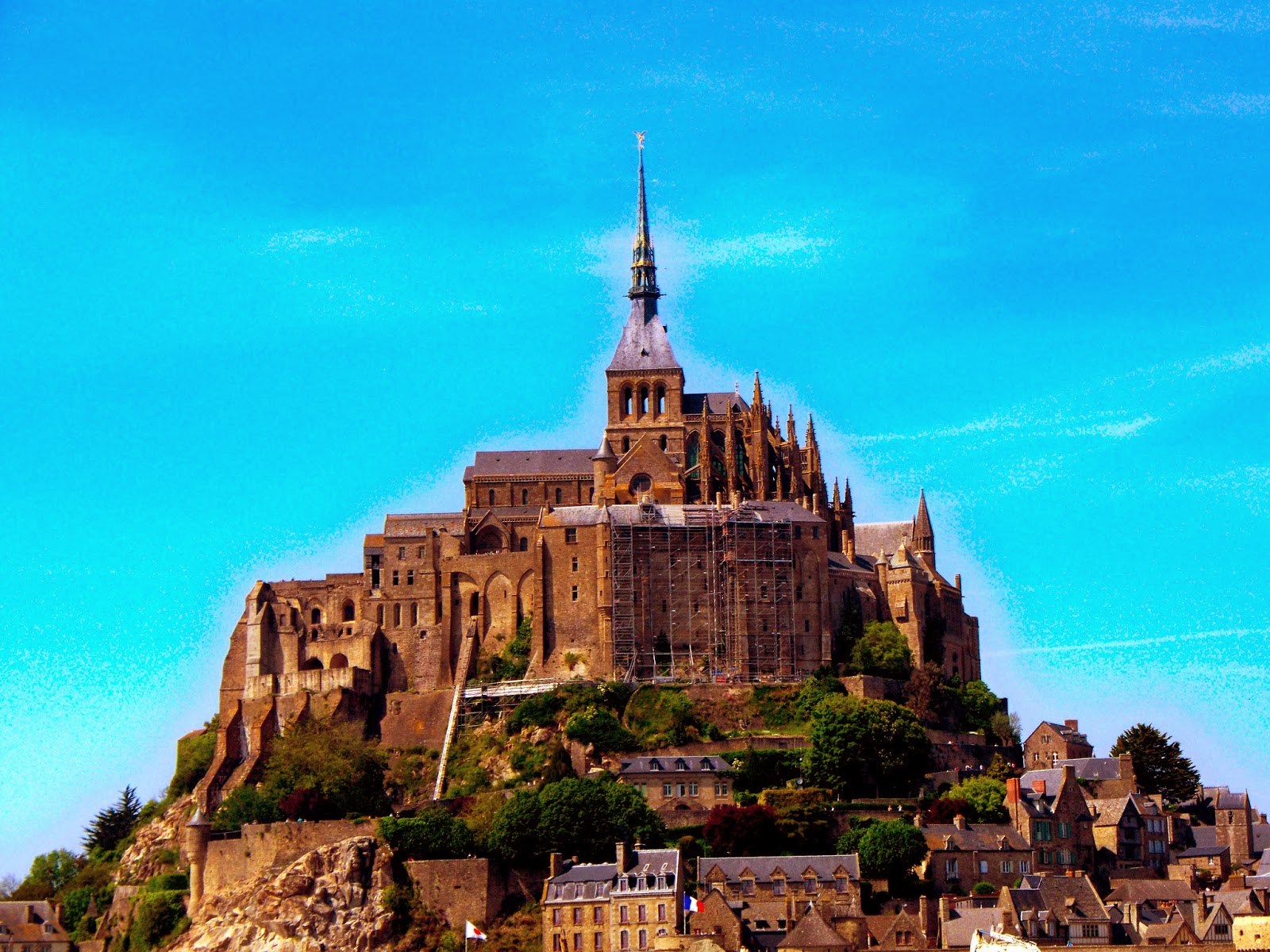 On the way back to St. Malo, just before (or just after, depending on who you ask!) crossing the border back into Brittany, we stopped by Mont Saint Michel. Although it was as full of tourists as ever, the beauty of a church like this out on an island in the ocean is undeniable! 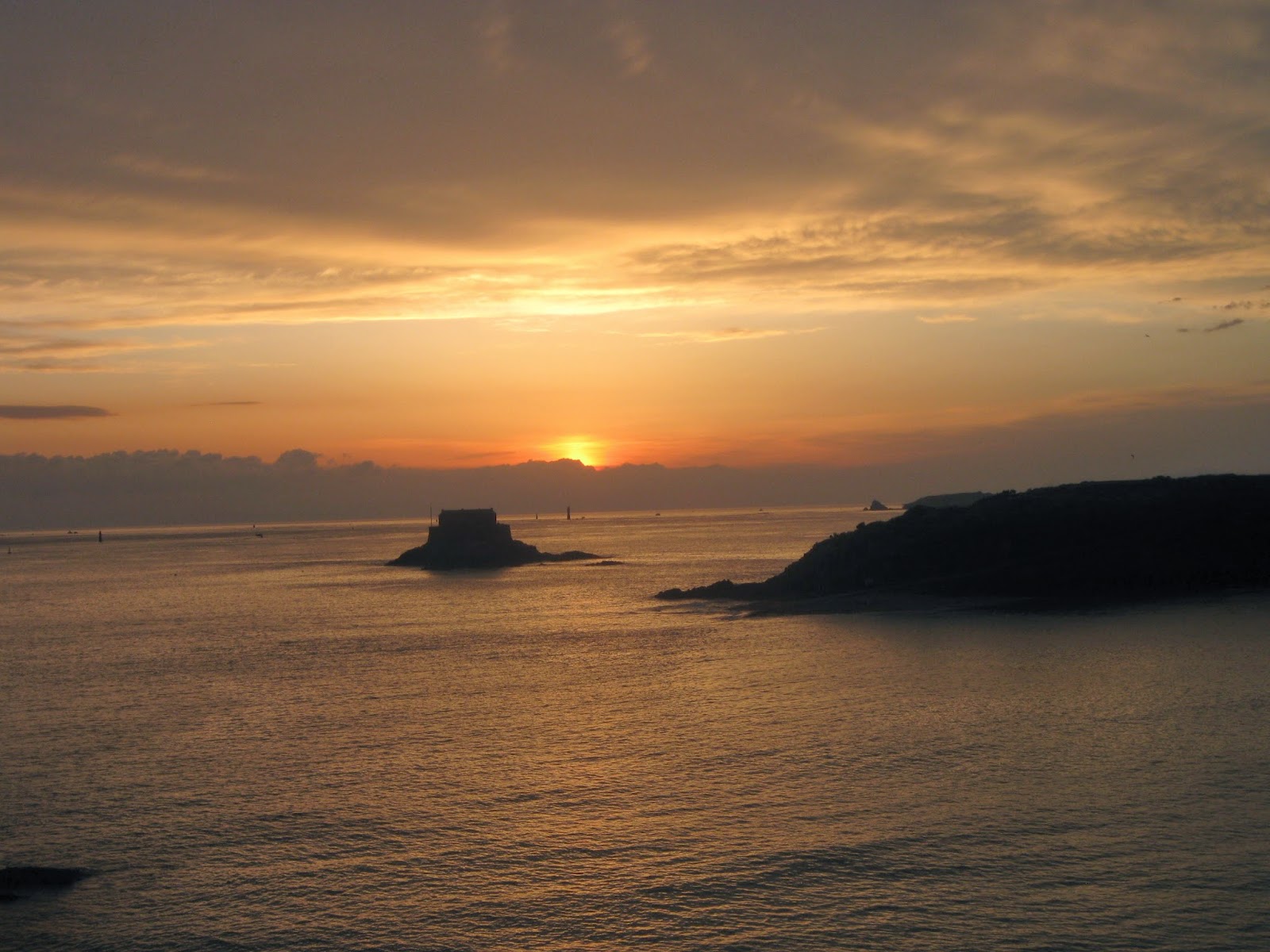 I fully enjoyed showing my parents around the town where I'd been living for the past 8 months, and I think they got a kick out of St. Malo as well, particularly the parts of it associated with World War II (my dad is obsessed)! 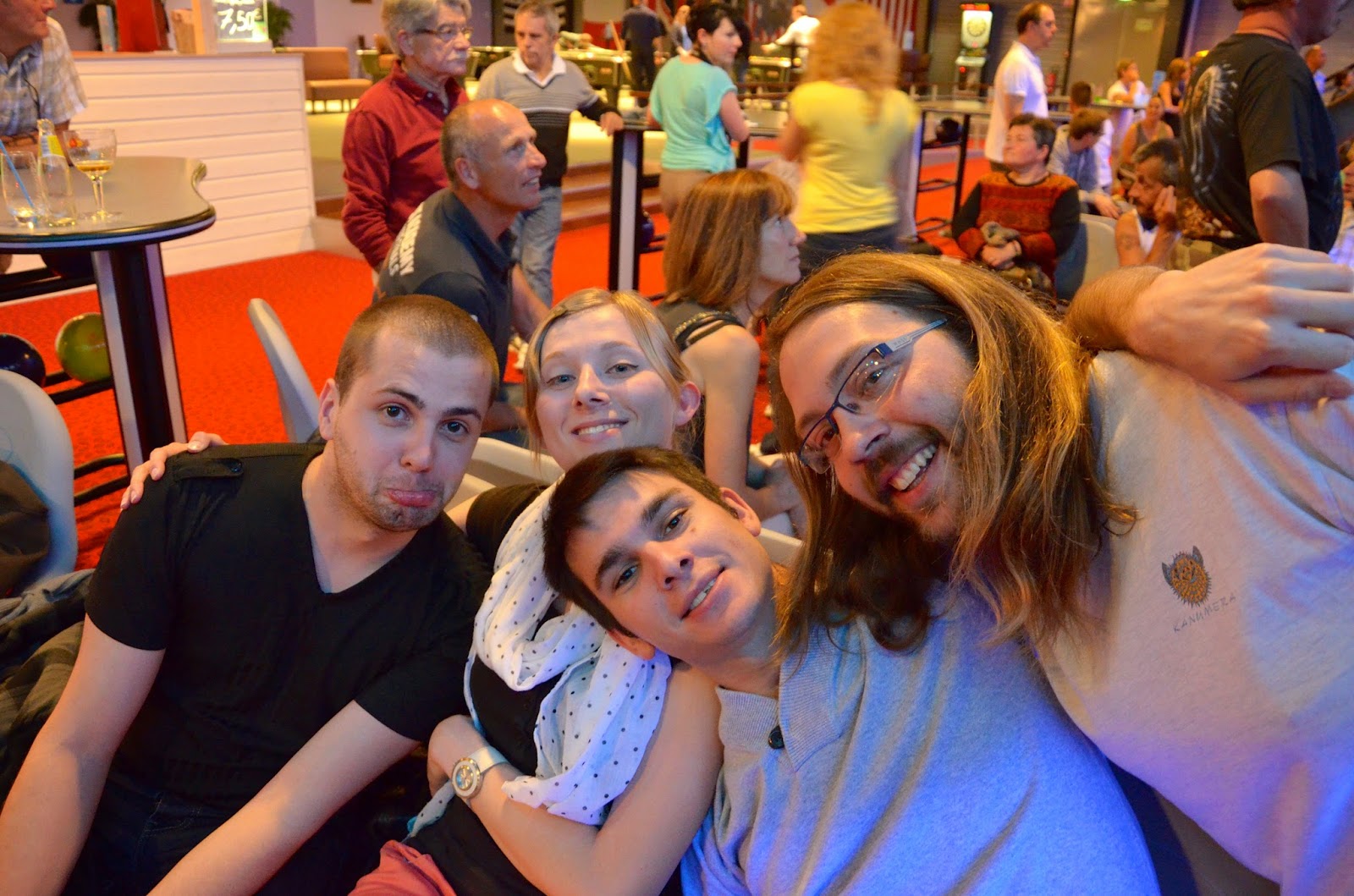 After I'd sent my parents back off to the States at the end of May, June was a much calmer month. I went bowling with some French friends (which is ridiculously expensive by the way, serves me right I guess for trying to do American things in Europe!). 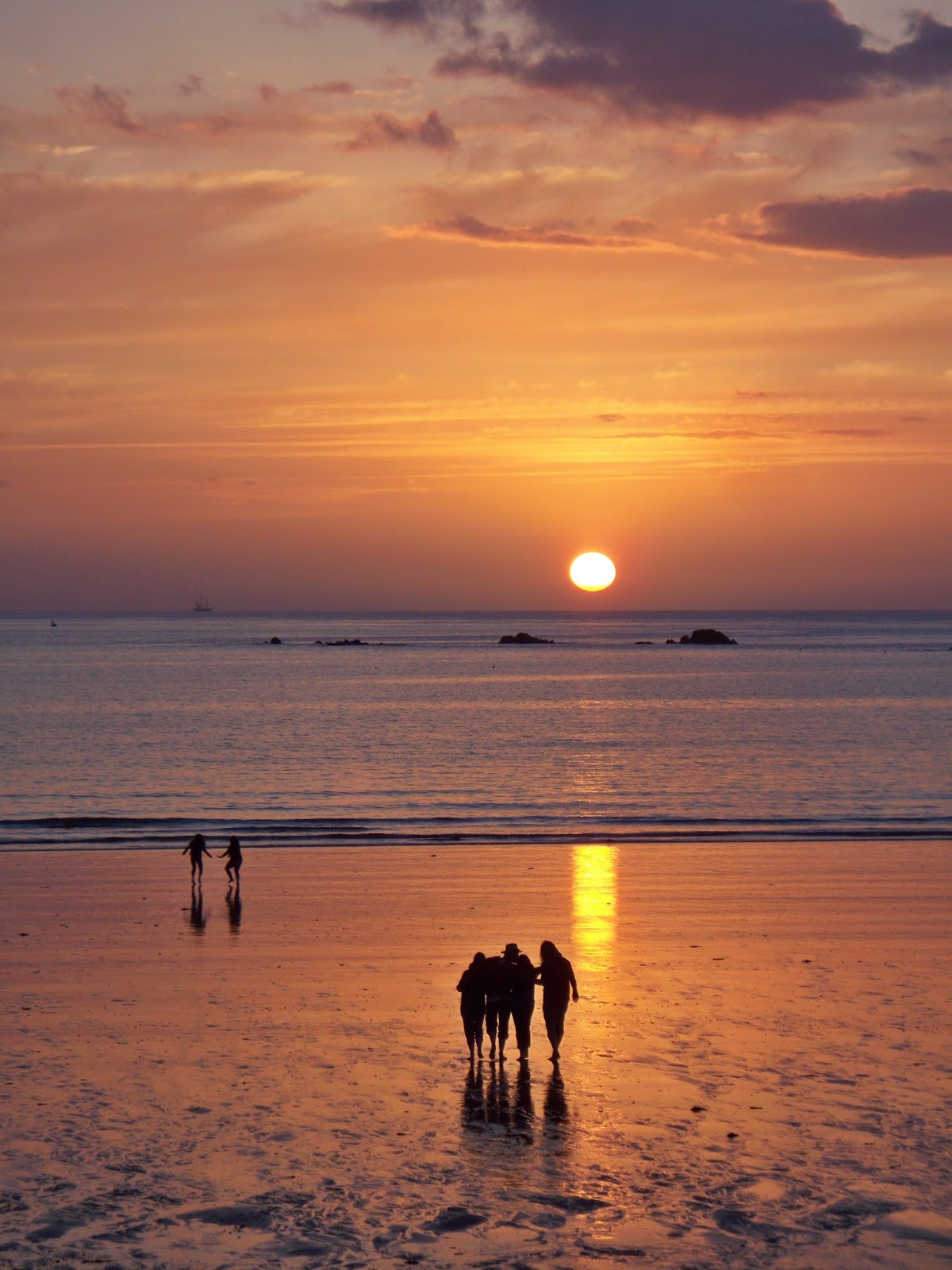 I had a beach bonfire with some friends, which honestly felt like something out of a movie to me! 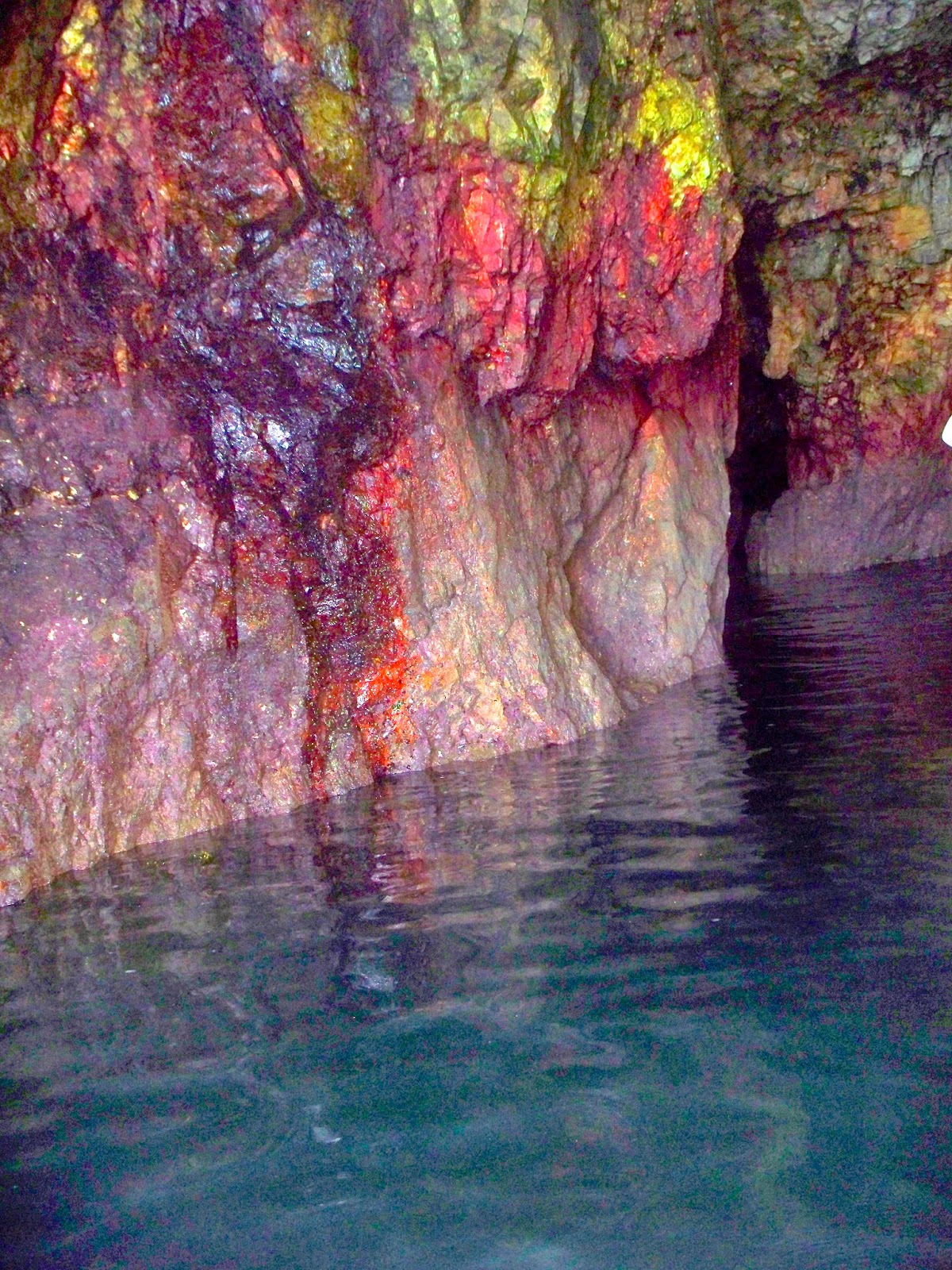 I visited Brest and the small towns nearby, where there were some sea caves with really gorgeous colored rocks! 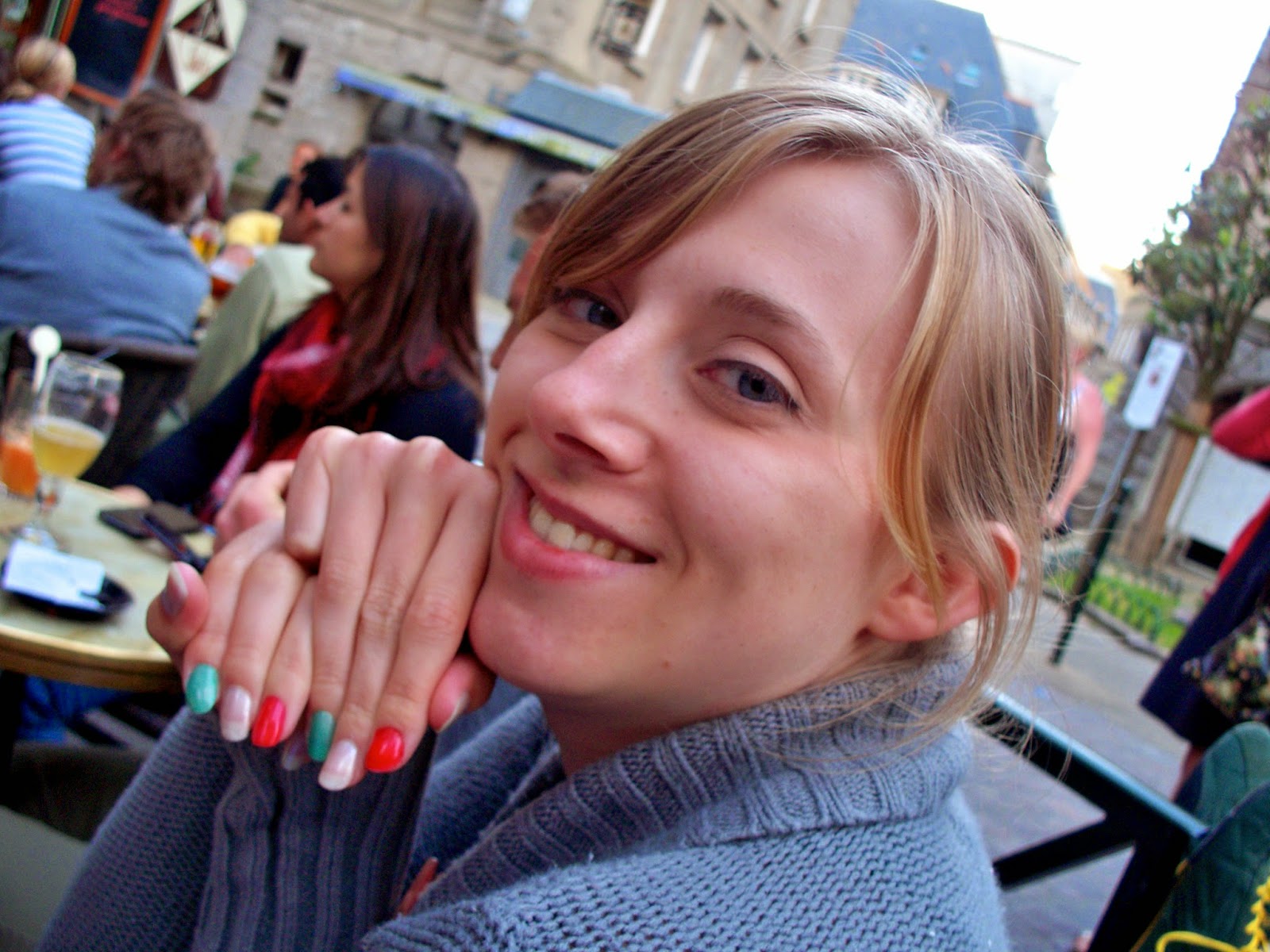 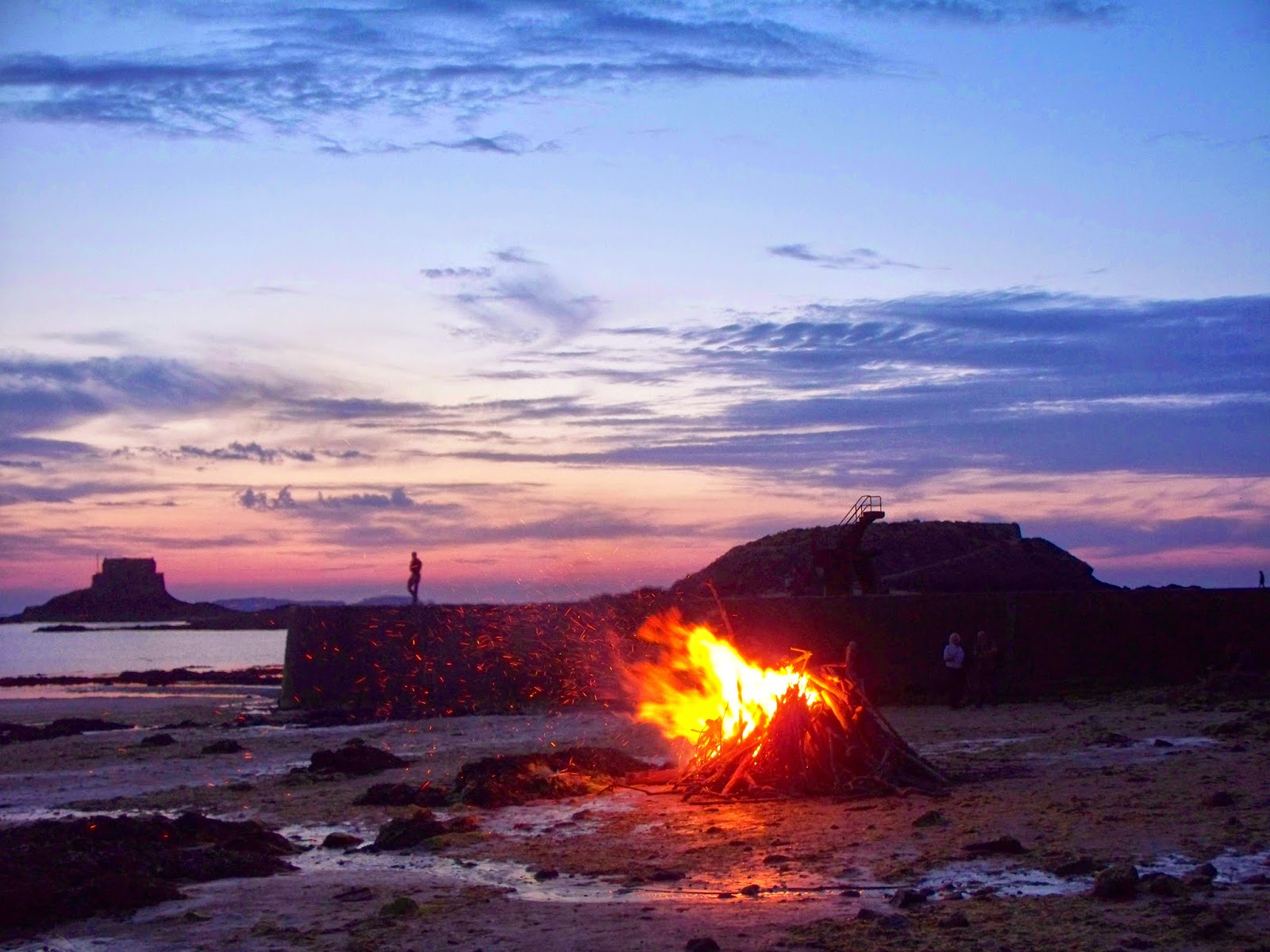 And then, sadly, it was time for me to say au revoir to St. Malo. It wasn't easy leaving a place I'd come to care about and feel at home in, where I had good friends (it never is). But St. Malo gave me a beautiful sendoff, as we went to a final beach bonfire to celebrate the summer solstice, and saw a gorgeous sunset for our trouble. 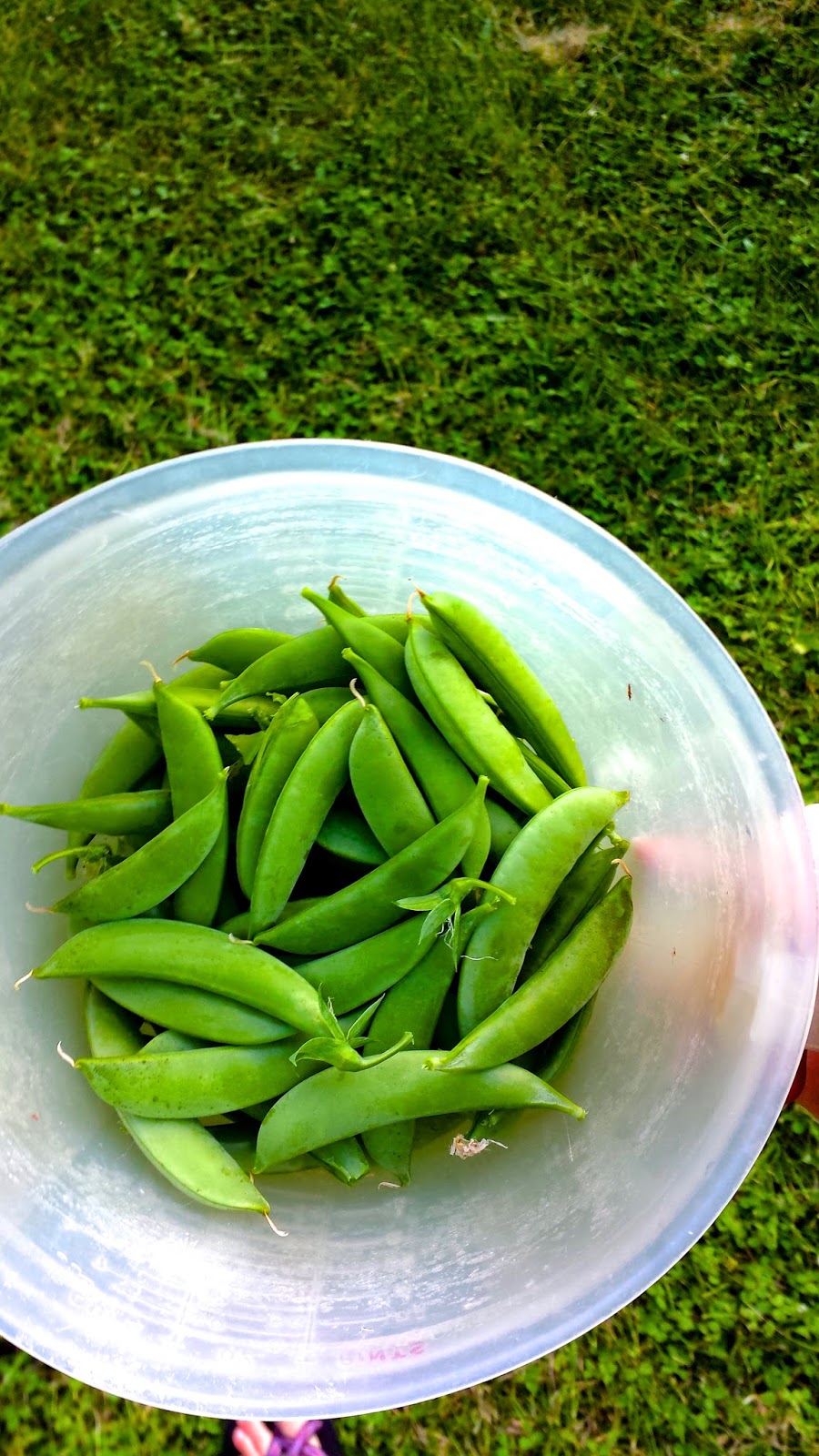 When I got home to America, I thankfully had fresh sugar snap peas from my mom's garden (my favorite food in the world) waiting to greet me. That helped stem the tide of my sadness at least a little! 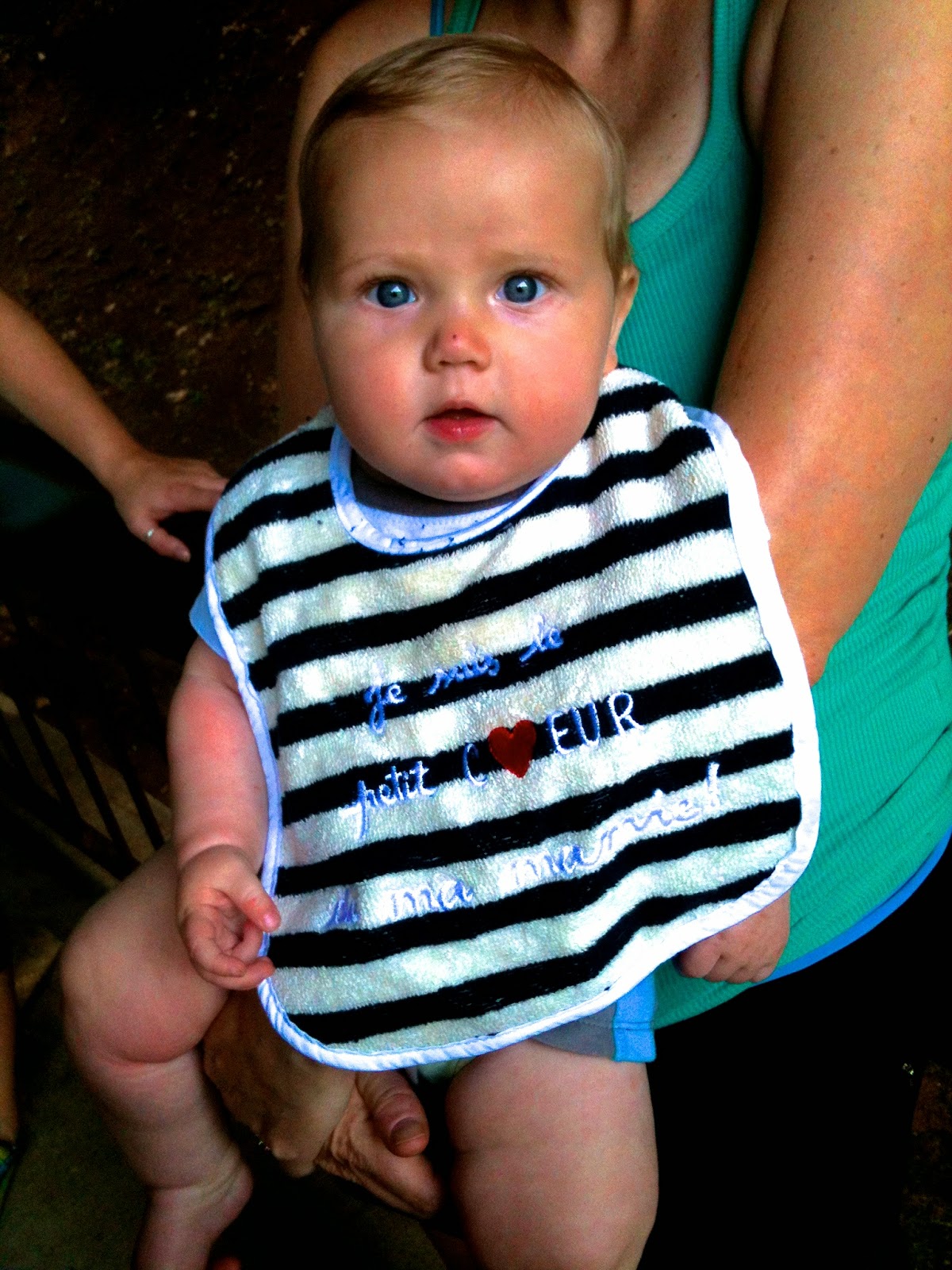 I ended the first half of the year in the best way possible, meeting my newest nephew! He's absolutely adorable, basically the Gerber baby, and the happiest little guy I've ever met, so it was a big thrill to finally get to see him in person!


The first half of the year was busy, but mostly good, with some very difficult moments thrown in just to keep things interesting! Stay tuned for the second half in the next few days...
Posted by Alisa at 2:06 AM