Last week, I was asked to do something that I found extremely difficult. No, not punish someone, not correct homework even. I was asked to write the English alphabet for some 7-year-olds.

You're right, sounds easy. Except I had to write it complete with an example of how you would phonetically spell the pronunciation of each letter in Spanish, on the spot, in front of said 7-year-olds.

Now you say that I'm just a wimp. By now I must know enough Spanish to be able to spell the pronunciation of the English alphabet, right?

...and here's where I had to stop. G? In Spanish, there's a hard g in front of some vowels (like in gato (GAH-toe), and there's a g that sounds like an h in front of others (like in gente, HEN-tay), but no g that sounds like a j. I looked to the real teacher, confused, and she suggested I write "lli" (as in allí, ah-GEE). Then she also said that there was a problem with A. "You need an i too, it's not just e," she said. I thought about it, and she was right. It's aaaayeeee, not ehhhh (I'm not using phonetic transcription because of the extremely small percentage of people who would actually be able to read it). I added the i, making it A-ei, and continued.

H...should be ech, right? Or so I thought anyway. No, there's another dipthong there! (A dipthong is when there are two adjacent vowel sounds in the same syllable) It's aaayeeeech, not ehhhch  So...

H-eich
I-ai (I was getting the hang of it now, English vowels are mostly dipthongs!)
J-llei (Another complicated one...I had to confirm this one with the teacher as well.)

K...should be que, everyone knows "que" in Spanish sounds like the letter K! Right? But no, fooled again, the teacher told me that once again there was a dipthong. It's kai, not keh. So I continued on, starting to wonder if I was really the best person to be doing this task after all...

(At this point, all the kids asked "Where's the ñ???" And of course I had to tell them it doesn't exist for us. They were sad about it.)

Q...once again, stumped. How do you make a y sound in Spanish if ll is j? Too complicated for me! The teacher had to step in again. "Write kiu," she said. I had to think about it for a minute and say that to myself a few times before realizing what she said made sense. Yikes.

W...oh god. Such a complicated letter. So long. Double you? Spell that in Spanish phonetics, GO. Real teacher to the rescue! "Dabl iu," she said. Phew.

W-dable iu
X-eks
Y-uai (I was pretty proud of thinking of that one. It's more than a dipthong, it's a tripthong. Pretty complex, huh?)

And now the real kicker. Z? Z doesn't exist here. Because of ceceo (the part of pronunciation in Spain which makes them sound like they have a lisp--they pronounce words with c and z with a "th" sound), if I wrote "zi," they would say "theeeee." And I had already used "si" for the letter C. What to do? The teacher, being indoctrinated into the ways of British English, said I should just write "sed" (they say zed in Britain, in case you were unaware). I complied, not entirely pleased with that but glad to have the task over with.

And then, then we sang the alphabet song. Finally, something easy! ...Except now that we had used zed, the song didn't work! "W, X, Y and zed, next time won't you sing with...med?" Totally screwed that one up. So then I just ended up confusing the kids by singing it the regular American way in consequent tries.

Boy oh boy, who knew the alphabet could be so complicated?? 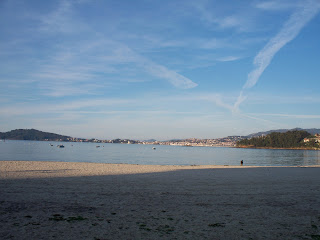 Completely unrelated image of a pretty beach
Posted by Alisa at 11:54 PM