I've only been back in Vigo two weeks, but I've done so many things already! I'm pretty proud of myself for kicking homesickness in the kiester. Who says you can't go home for Christmas and come back and get rejuvenated to see more things? I've been having such a good time that I'm considering reapplying for next year, something I originally wasn't going to do. We'll see how that goes. Anyway, here's what I've been up to.

My first weekend back, some friends and I went down to Braga, Portugal, because this year it is the European Youth Capital of Culture (or something similar to that), and so they were having a celebration. We went exploring around the town before the celebrations started, and ate a bit and that sort of thing. Then we went down to listen to this concert, which was the main reason we were there, but it was raining and the music was frankly pretty weird. And we couldn't see the light show that went with it because it was so crowded! So we pretty quickly abandoned the idea of watching and went to eat dinner with a large group of Couchsurfers.

Couchsurfing, in case you didn't know, is a website where people can request to sleep on other people's couches in cities that they are visiting. And because I know that the idea of me doing that will scare my parents to death, I will inform you that I haven't actually surfed anywhere (yet); I've just been meeting new people at Couchsurfing meetings and stuff.

Anyway. That was pretty fun, and we had a meal for really cheap (yay cheap food in Portugal!), but I got really sleepy towards the end of the several-hour dinner, and so most of my group who came in the same car together decided to head home after that. Here are some pictures of our day in Braga: 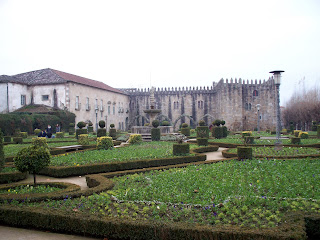 Here is a picture of a beautiful square in Braga. 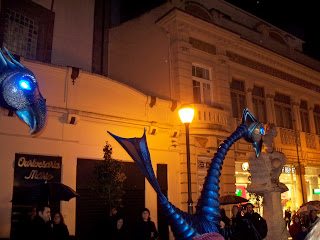 These weird things were part of the celebration, and they would come up behind unsuspecting people and peck them. Very strange.
Then this past weekend, we went on a little trip to Guimarães, Portugal, which is one of this year's European Capitals of Culture. The first thing we did there was to check out this cool old castle, which apparently is where the Portuguese won their independence, so they say that Guimarães is "where Portugal was born." 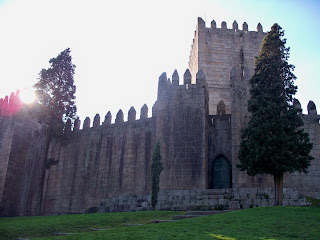 A picture of the castle 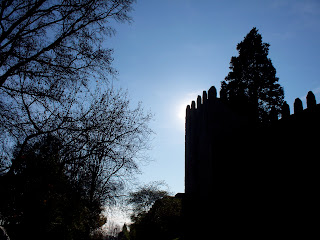 Another picture of the castle--can you tell that visiting an old castle was extremely satisfying to my inner history nerd? 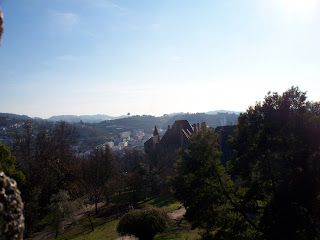 View from the ramparts 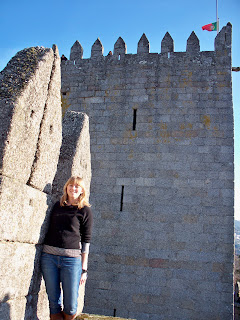 Me at said castle 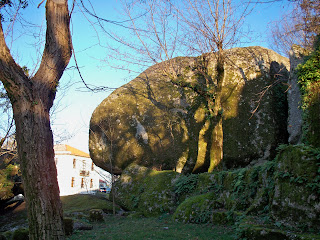 This is one of many gigantic rocks I saw that day, which I found extremely impressive.
Later, after a small picnic on the castle lawn, we took a funicular up this hill to see a church. We didn't get to go inside, but the views were impressive (but they look less so on my camera, so no pictures).
Then we met more Couchsurfers for dinner and then went to the show. The show was...strange. They had this robot marionette horse, and then robot marionette man, which took up most of the show just standing up and walking around. Kind of cool, but not worth the amount of time it took. Then the other part of the show was on this wall of balconies, which they had made a 3D image of and then they played around with the 3D image, making it look like the wall was shattering and stretching and stuff. Kind of cool! Then there were some small fireworks, which I always enjoy, although I wish there had been more and that they had been bigger. The real problem with the show, though, was that there were thousands of us squashed into this medium-sized square, and so you couldn't move at all, and it took probably 45 minutes to get out of there, all the time feeling like part of a herd of cattle.
Then, the worst part, as soon as we got out of the crowd and into a bar, my friend realized that her wallet had been stolen! So terrible. So then we hightailed it to the police to report it, and that put a bit of a damper on the rest of the evening. Despite the bad ending though, it was a nice day.
Then the next day, back in Vigo, we made some plans to meet up with a girl we had met the night before, who was on her way back to Asturias. We went down to the beach and walked around for a while in the beautiful 20-degree (Celsius, 70-ish Fahrenheit) weather. It was so warm that I was out in a t-shirt for a while! I amused myself for awhile imagining everyone I know back home in the snow and me in Spain in my t-shirt in the sun at the beach. Ahhhh, what a life.
Then later, after the girl from Asturias left, we went over to a nearby town called Baiona, which is very pretty. It's also, I learned, the place where the first of Christopher Columbus's boats returned to, making it the first place in Europe to hear about the discovery of the New World! Pretty cool, I thought. I guess they do a reenactment of this in March, and I can't wait to go see it. 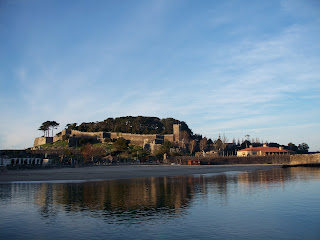 Another castle, this time in Baiona (I will never stop loving how many castles there are in Europe!) 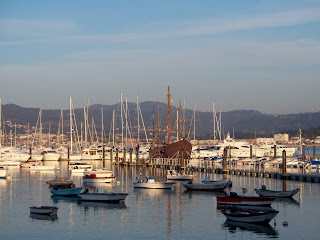 A model of the Pinta, the first of Columbus's ships to come back from the New World 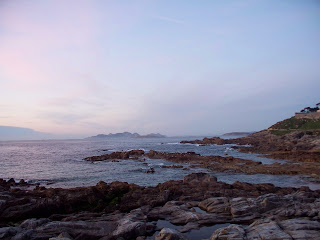 The ocean, being beautiful as usual 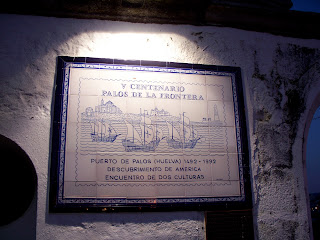 A sign that says the stuff about the Pinta coming back from America
So that was the past two weekends. Perhaps you're now saying to yourself, wait a minute, you give us 3 pictures of London and Amsterdam and a million of these tiny places near where you live that we've never heard of. What gives? Well, sometimes I like discovering tiny towns better than seeing big famous ones. It feels more intimate, like you get a real feel for the place. And you also feel a little bit like an explorer, because you're seeing places that haven't been seen by a million people before you.
So that's that. Until next time, make the most out of the little things in life.
Posted by Alisa at 1:48 PM