I thought it was about time I shared my plans for the next year (because you were all so curious, I know). I was a flip-flopper there for a while, one minute deciding I wanted to go home and the next that I wanted to stay. But I had an epiphany a few weeks ago while sitting in a café relaxing that I would be a fool to go home now and trade in this laid-back lifestyle for one of stress and misery. I had thought that I needed to go start my real life, but I now realize that this can BE my real life, if I so choose.

So now I've decided to stay for another year.

The next question (the one I've been ruminating on for weeks now) is WHERE exactly to go next year. I have three options: a) stay at my same school, b) stay in Galicia but move to another school (which I don't get any say in), or c) move to another region entirely.

At first I had thought it would be good to move to another region and learn about other parts of Spain, but then I thought about how much easier it would be to stay in Galicia. My bank would already be set up and I (hopefully) wouldn't have to reapply for a visa in America--I could just renew my foreigner card here in Spain. Plus staying would increase my feeling of being settled, because the first few weeks wouldn't be a blur of confusion and being lost all the time, and because I could build on the small friendships I've already made here.

However...if I were to move to another school, maybe I could get a schedule that wasn't biweekly and could therefore do private lessons because I'd be free at the same time every week, maybe I could be just in a primary school instead of in a primary and a secondary, maybe my commute to work would be way shorter (instead of the 45 minutes that it is now), and maybe I could make even better friends with coworkers because we'd actually live in the same city (almost all my coworkers who are around my age live in Ourense; I live in Vigo).

The unfortunate thing is that if I choose to move schools, I have no idea what I'm going to get. I can try to ask to be placed in Vigo, and I can ask for a primary school, but there's no guarantees. I could end up with something worse than I have now or way better than I have now.

So I just keep on deliberating, back and forth and back and forth. Does anyone have any good advice that will help me make a decision? 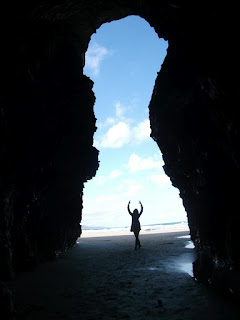 Here is an unrelated awesome picture that my friend took for me last weekend in the Playa de las Catedrales, a cool beach in the north of Galicia.
Posted by Alisa at 1:59 PM