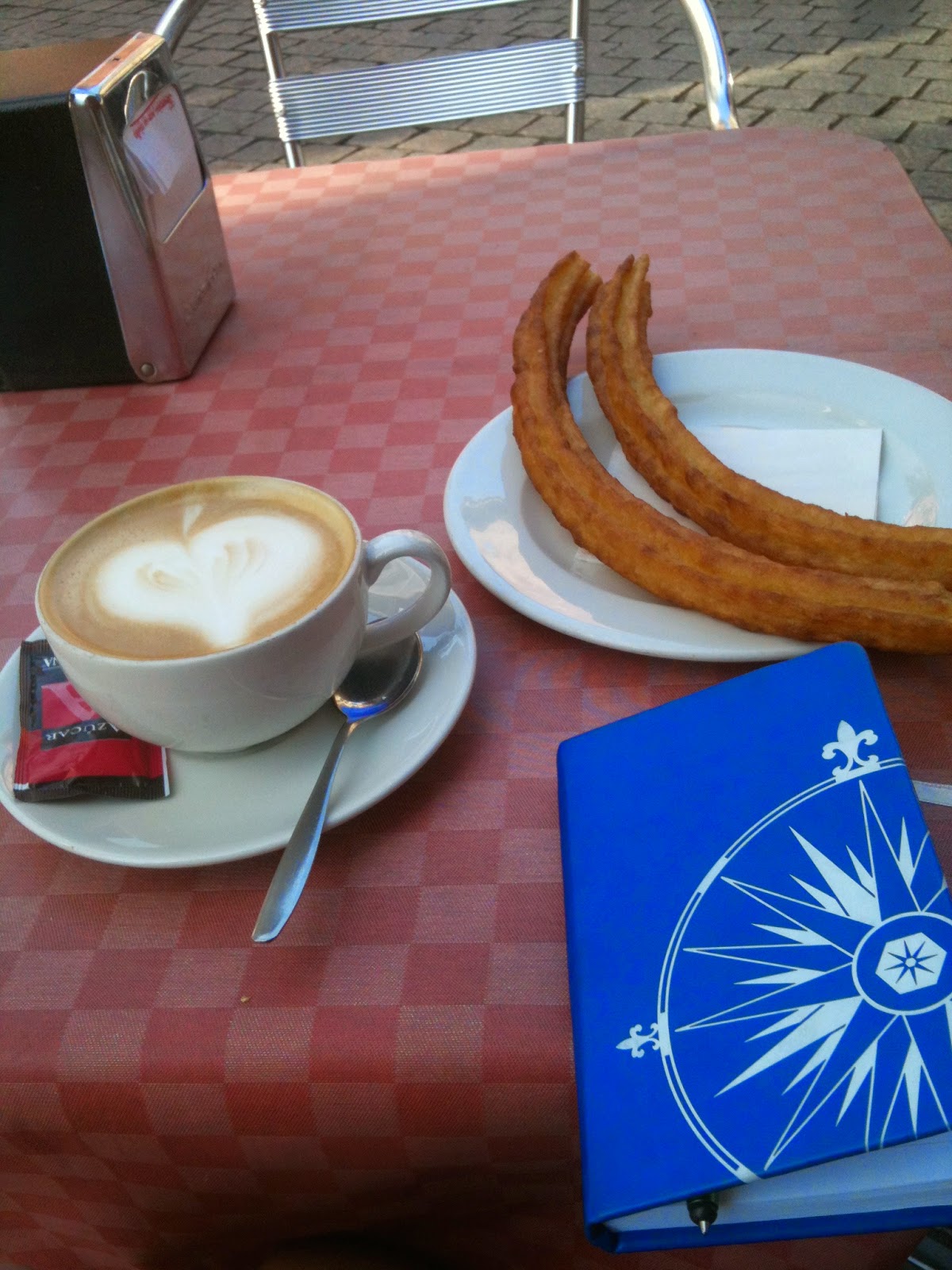 Nothing says welcome back to Spain like café con leche and churros!!

Ah, September. It's la rentrée (French for back-to-school), the time when we shake off that summer slowness and get back into the swing of things. I, for one, am actually quite glad to see summer go. I've never been a fan of hot weather, and my skin does not take kindly to the sun, plus the fact that I (like any good American girl) get a little bored when I'm not working and haven't got a lot to do. Spain, you tried for three years to teach me the art of relaxation, but I'm not quite there yet!

So, I guess that's one good reason to be back for another year of Spain-induced madness, learning to aprovechar de la vida while actually working to get ahead in it...aka the best of both worlds!

It's been a bit of a surprise to find myself living in the province of Madrid, which I've been so vocal about disliking. I mean, I've known for a while that I was moving here, but now that I'm actually here it honestly feels a little strange. I'm trying to give it another chance, because I don't need any reasons to make myself unhappy, but I am struggling a little bit with the intense ~40ºC (~100ºF) heat. Luckily, as everyone I've met here has told me, it will only be for a few more weeks, and then I can really settle into having a good time.

In the meantime, I've been thinking lately about how bad I am about sharing my experiences with my loved ones back home and elsewhere. I almost never post photos on Facebook, as I'm not a fan of their privacy policies, and my Whatsapp and Skype sessions are sporadic, and are only with a few select people. And I think my natural reserve has caused me to keep too much to myself, to the point where I've realized that many people who I used to be so close with have no idea what's happening with me these days.

Of course, they could always write and ask what's new (and some of them do, and I really appreciate it!), but I see now that 1) expecting too much of that is clinging to the past to the point of fallacy--sharing photos and stories over social media is simply how people communicate these days, 2) people are busy, and as sad as it is, most of them don't have the time or attention span to write long newsy emails or messages, or even have Skype sessions--they need news in short snippets, and 3) when they don't hear much from you for a long time, people (also sadly) tend to forget that you exist...to stay a part of their lives, you need to have a constant presence in them--quite a challenge when you live many thousands of miles apart.

All of this to say that although I'm still not up on the latest internet crazes, I don't have Twitter or Instagram or Snapchat or Tumblr or Pinterest or Vine or whatever it is you crazy kids are using these days, and I still refuse to post most of my photos on Facebook, I'm going to try to be better about staying updated in here, so that when I DO see old friends, we don't have a year or more's worth of news to catch up on. I feel like I've grown too far apart from too many people, and I don't want to see that continue.

Bref, I just moved to Alcalá about two weeks ago to do a Master's program and teach. I haven't quite started yet, but here are a bunch of photos of my first few days. 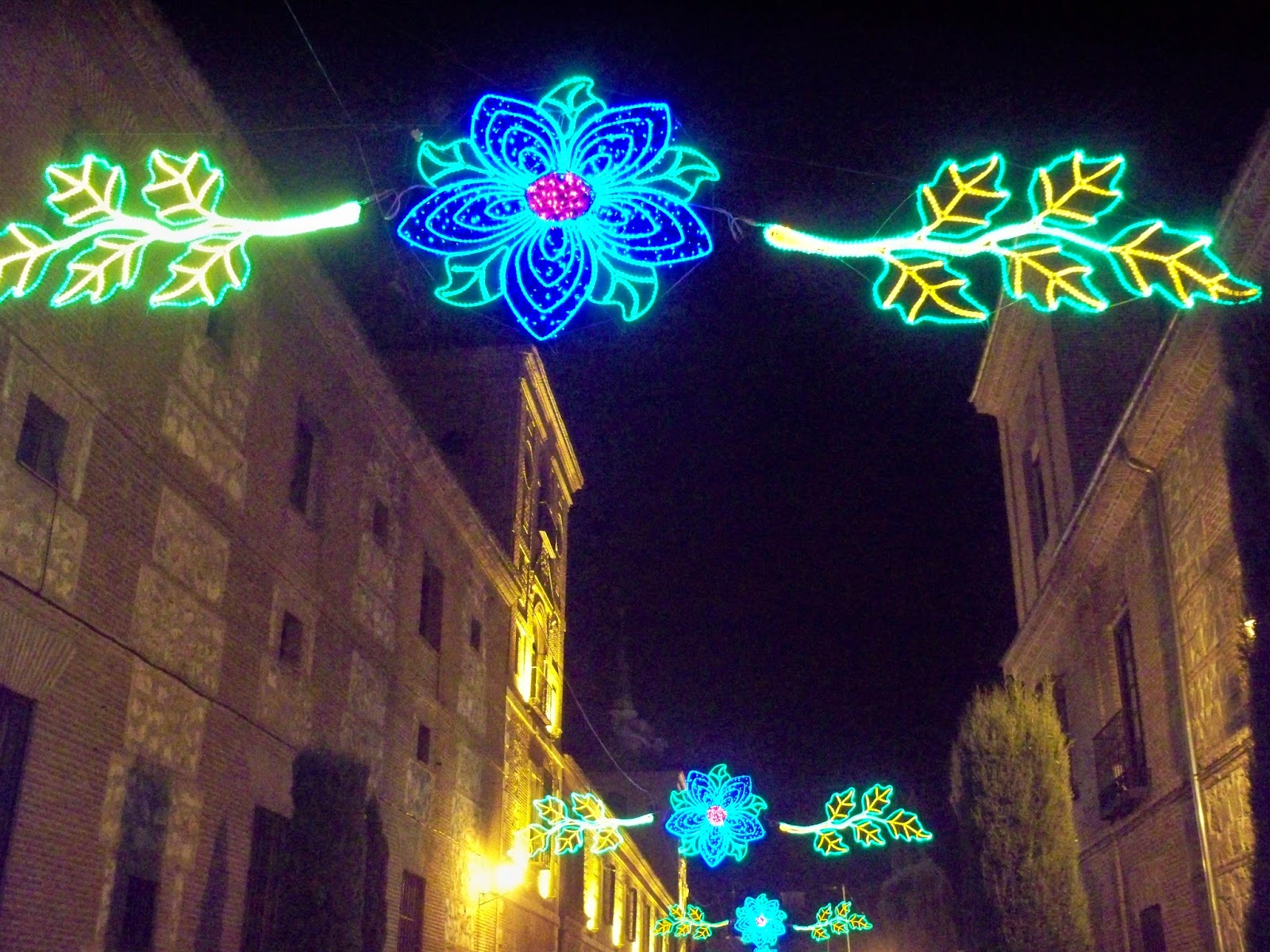 When I first arrived, Alcalá was having its annual feria, or festival. This was definitely a nice welcome to the city, since everyone was in a good mood and out celebrating. And all the streets were decorated with pretty lights! 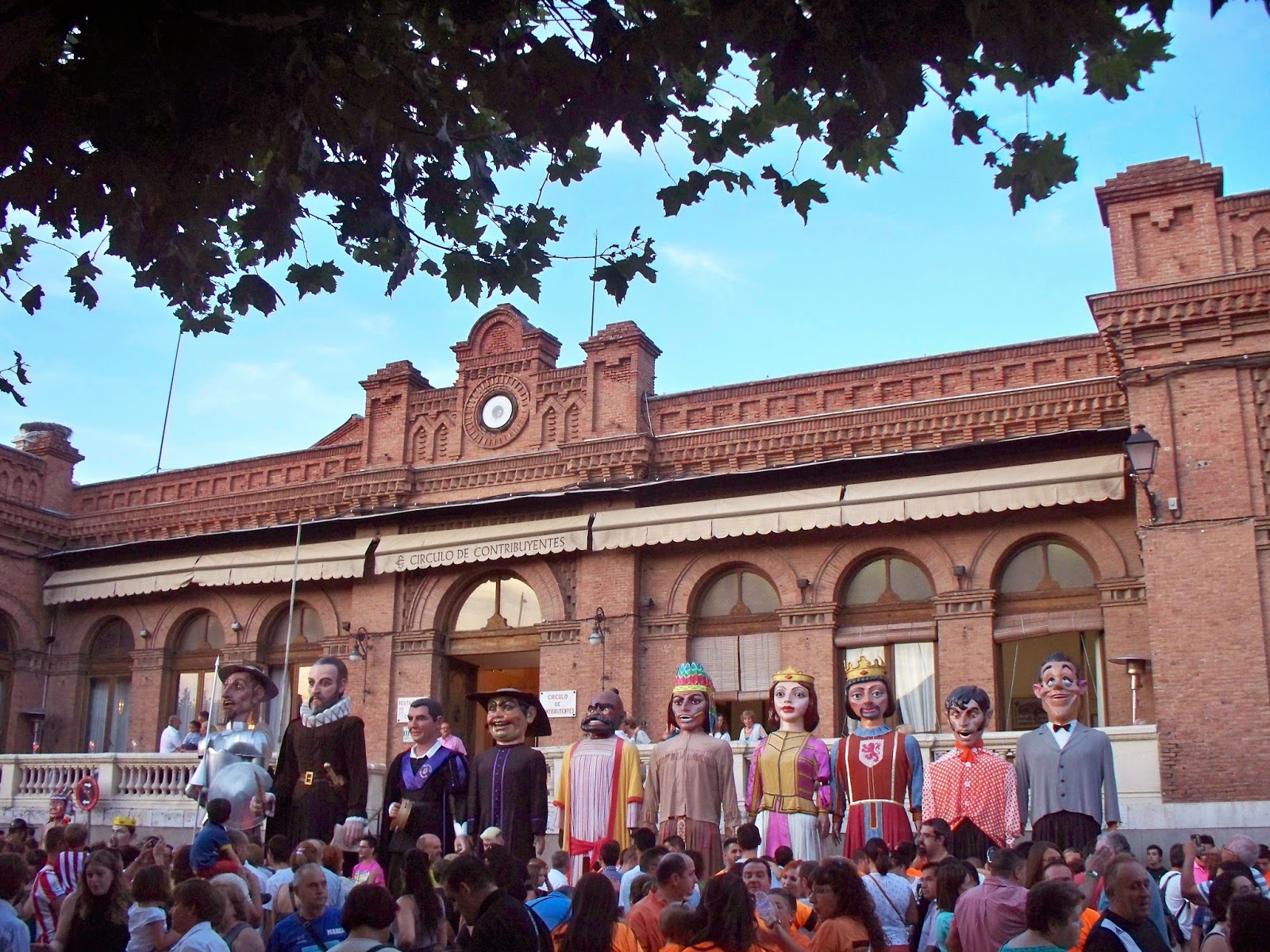 These were a part of the festival. They were giant statues, carried by people who have apparently trained since infancy for the job! They would walk around the streets of town, having little parades and dancing, almost every day. 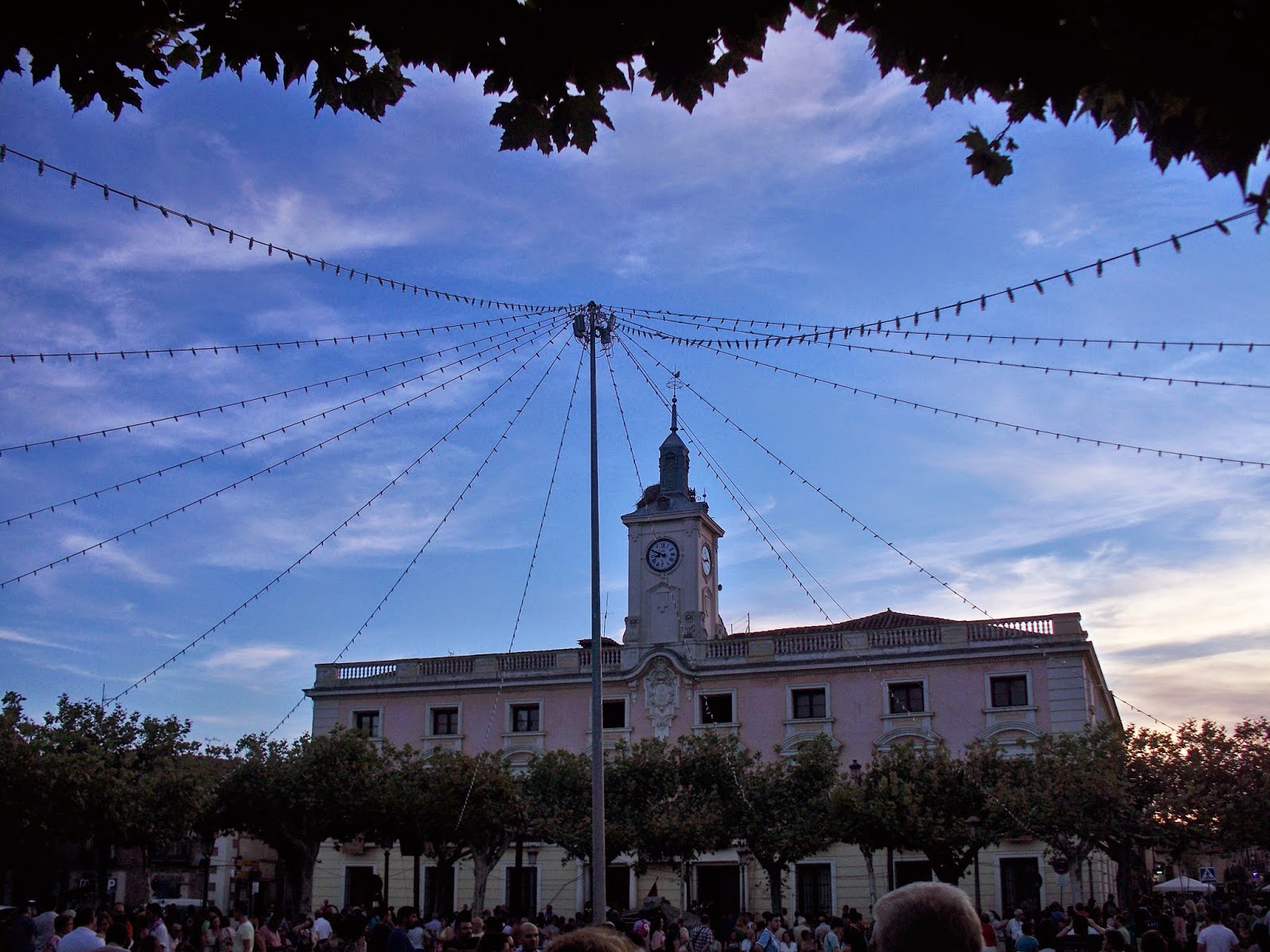 The city's main square was also decorated with lights for the festival. 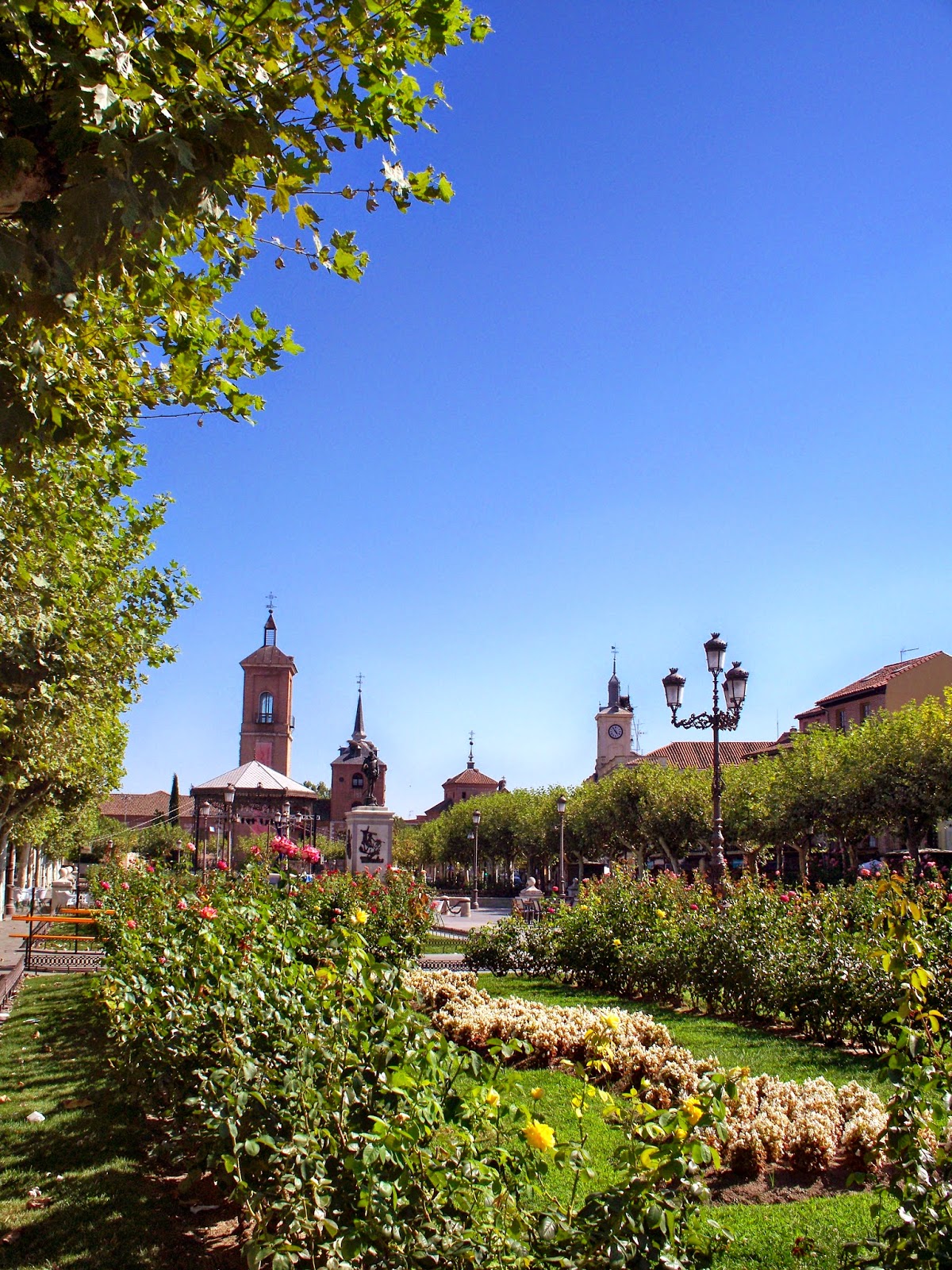 This is the main square of Alcalá, Plaza de Cervantes. You can see a bit here that the building style in this town is very different from that of Galicia, and much more what I consider "typical Espanish." That was pretty much the first thing that struck me on arrival, like Dorothy not being in Kansas anymore. And don't be fooled by the greenery of the square, which is very carefully maintained--the surrounding area looks much like the desert, dry and tumbleweed-y. 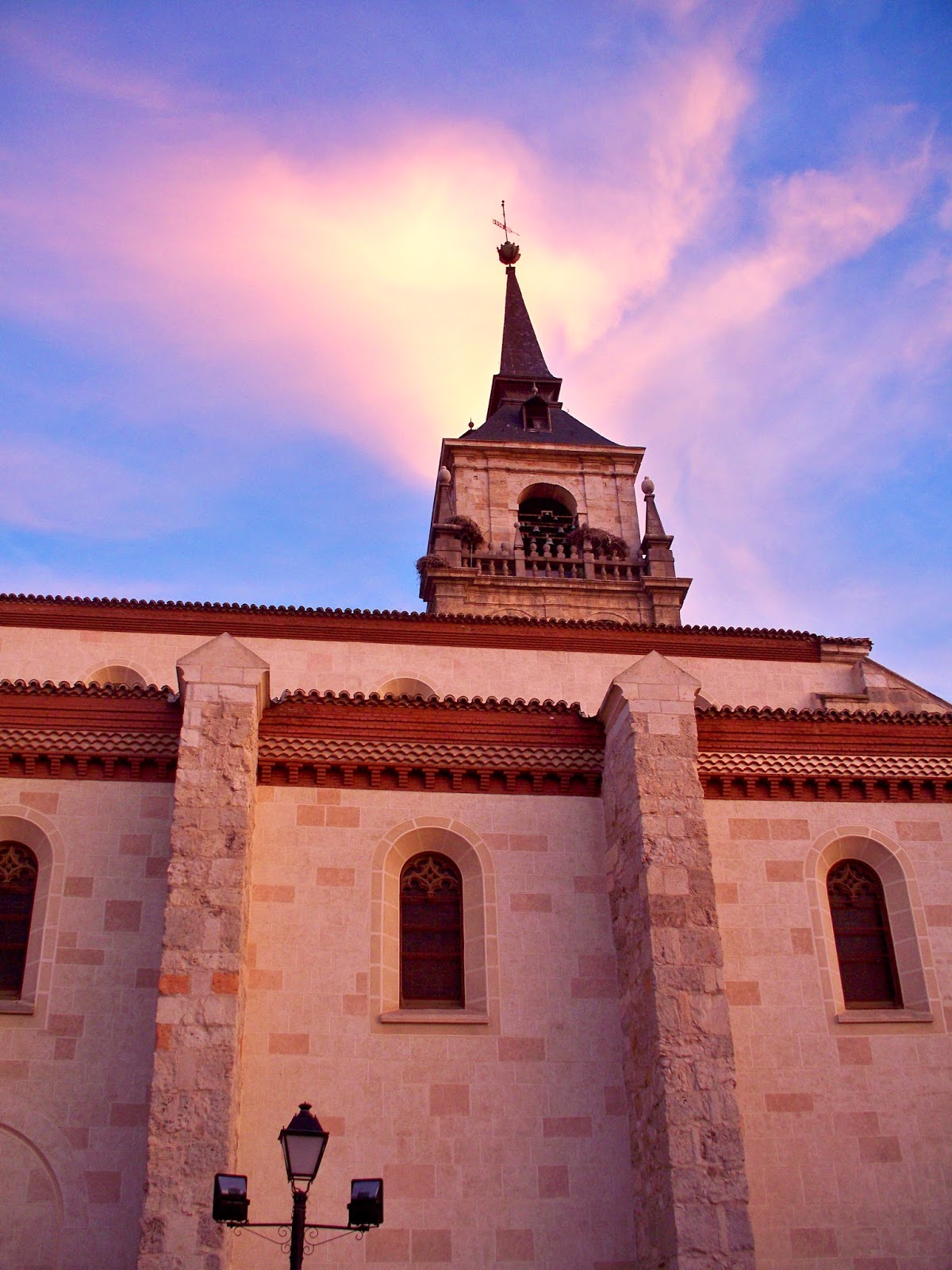 This is the city's biggest cathedral, called "Los Santos Niños" (I'm sure there's a story there, but I have yet to look it up). It is definitely looming, but I find myself unimpressed, largely because it was mostly destroyed during the Spanish civil war and recently remodeled, so it looks not as ancient and awe-inspiring as many other European cathedrals. 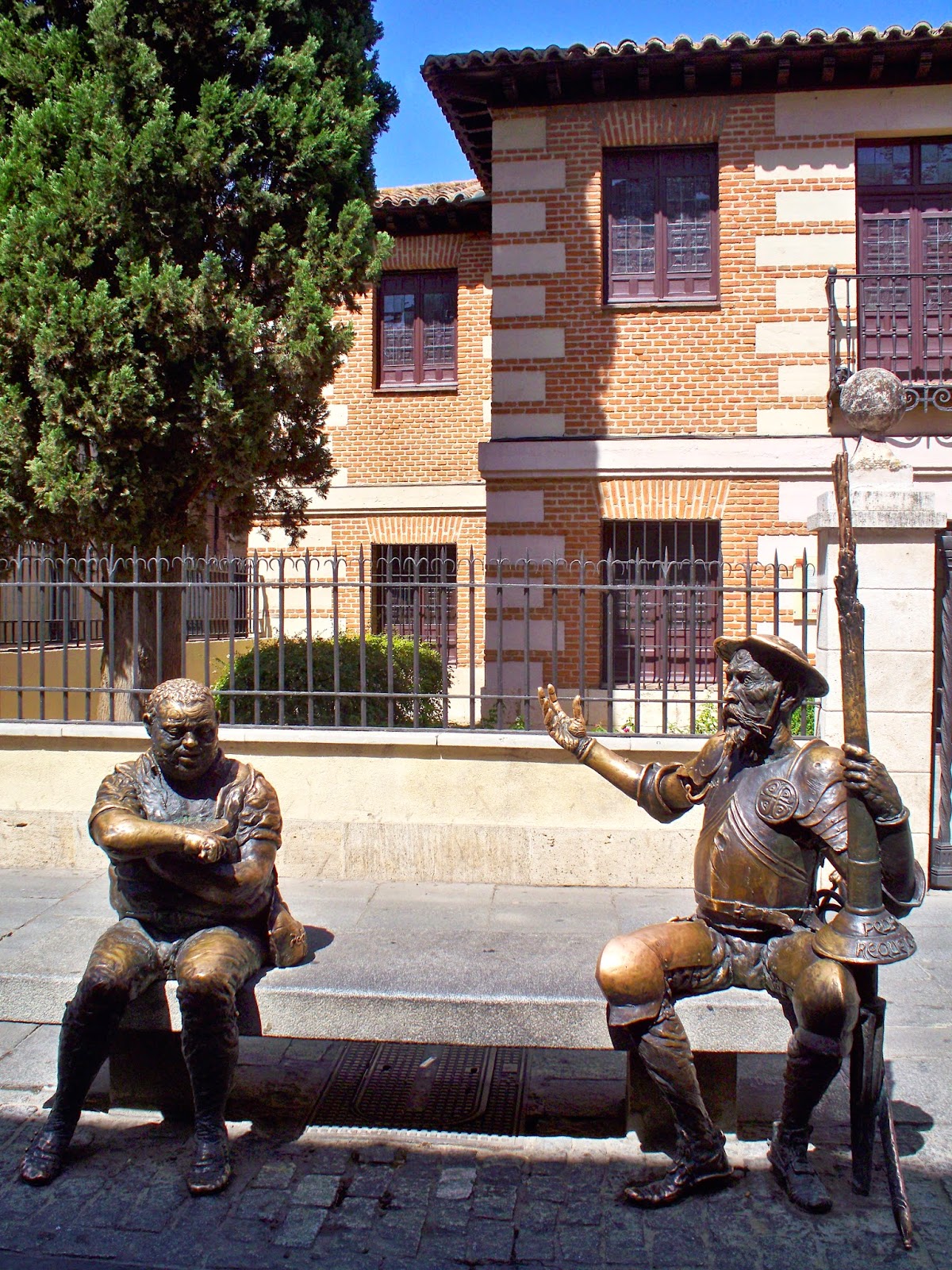 The second most striking thing about Alcalá is that it appears obsessed with its connection with Cervantes (author of Don Quixote and probably Spain's most celebrated author, for the uninformed). Not only is the city's main historical center named for him, but there are many statues and paintings all around town celebrating him and his works. He supposedly was born here, though there is nothing to prove concretely that he ever lived here. Regardless, the city has gone all out proving its claim to fame as the "home of Cervantes." This is a museum and the statues outside it at the house where his family once lived. 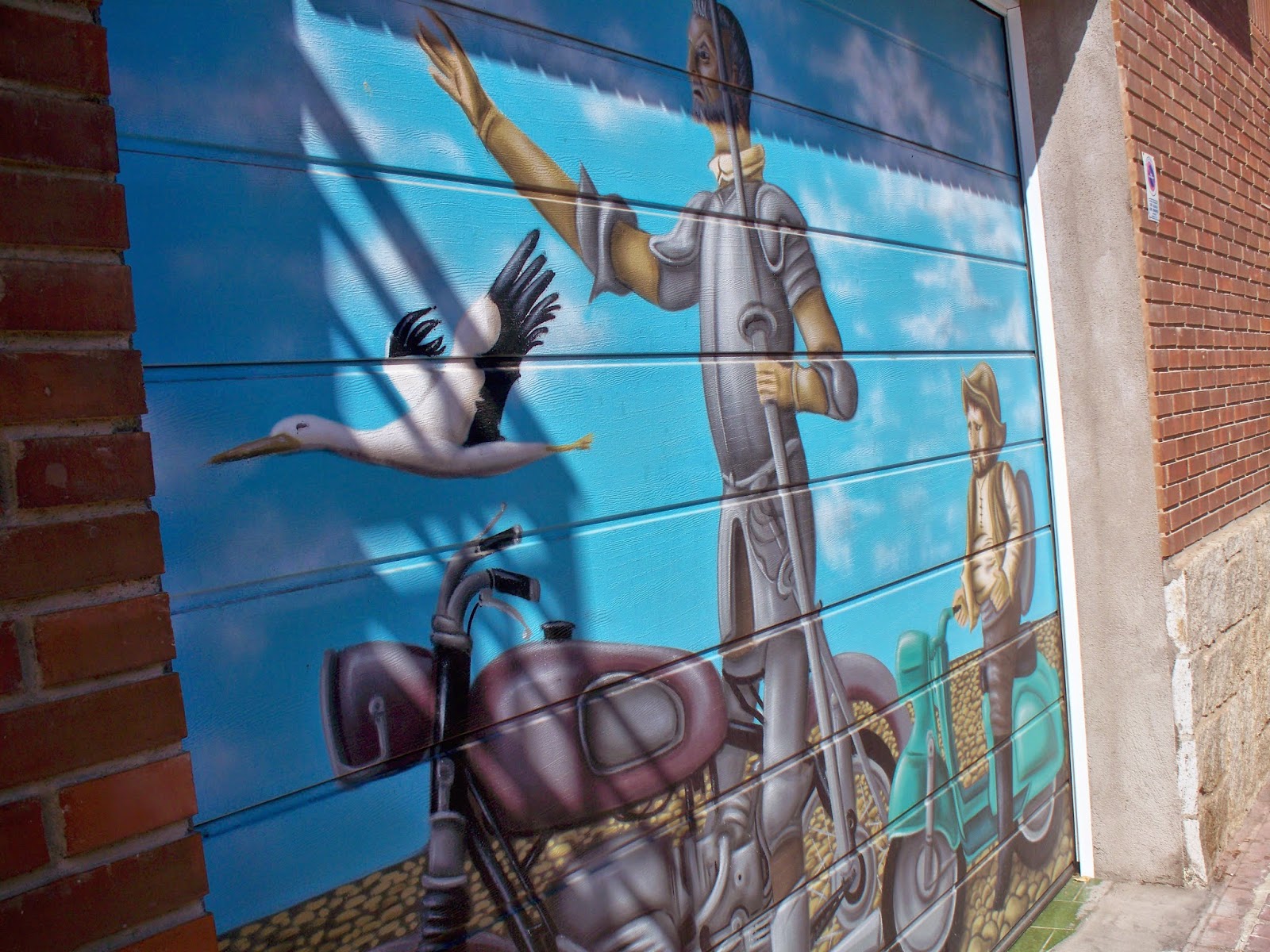 Even the persianas (blinds) in some shops are painted with Cervantes-related things! 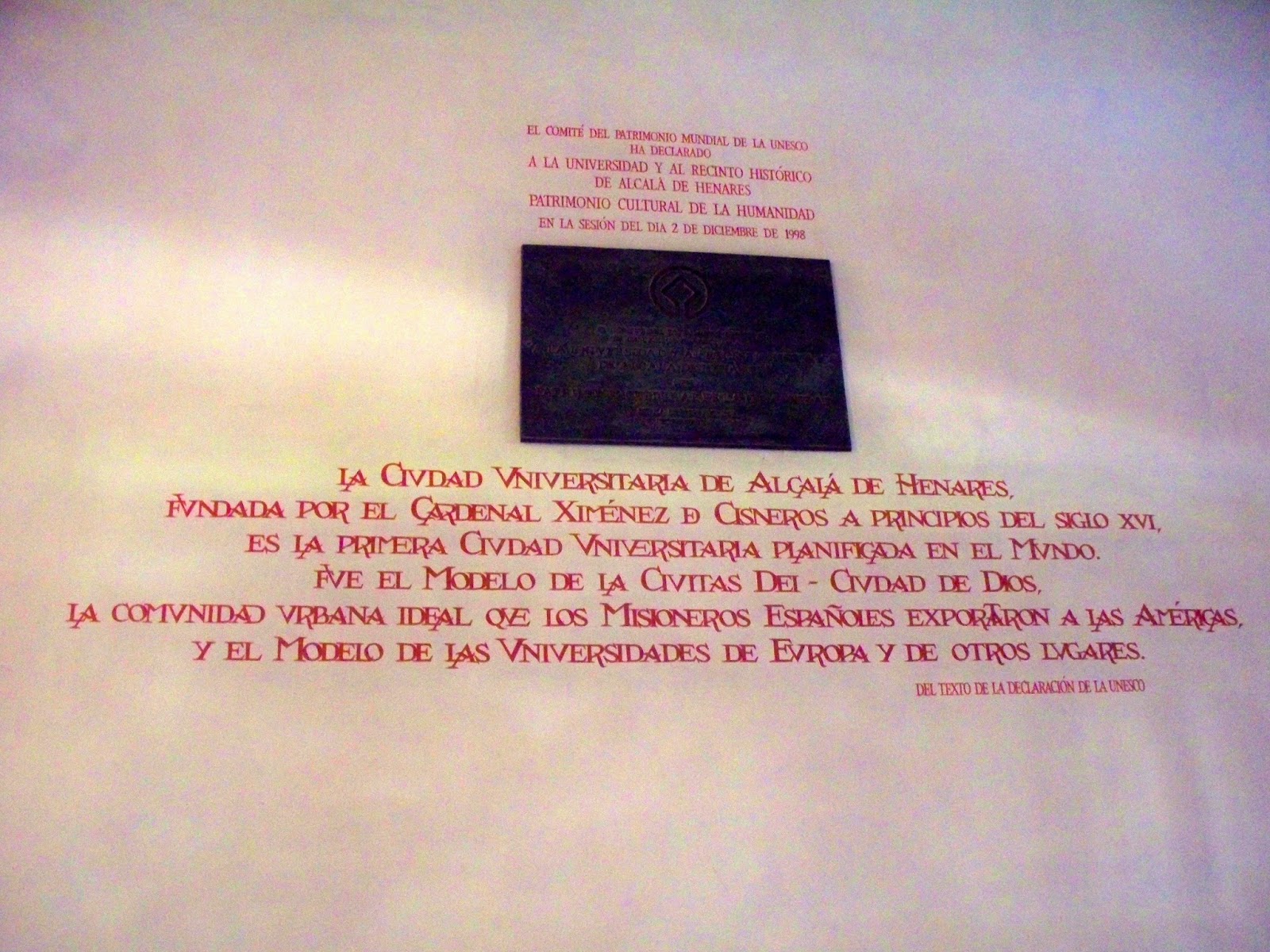 The next thing you notice about Alcalá is that it is veeeery proud of its university. I've been told many times already by various people how it's one of the oldest universities in the country (founded in 1499), and used to be called "La Universidad Complutense" (the Roman name for the town was Complutum), until it was moved out of town and into Madrid. It reopened under a new name in the 1970s, and has taken over the historical university buildings, as well as many other historical buildings in the city center to save them from demolition. 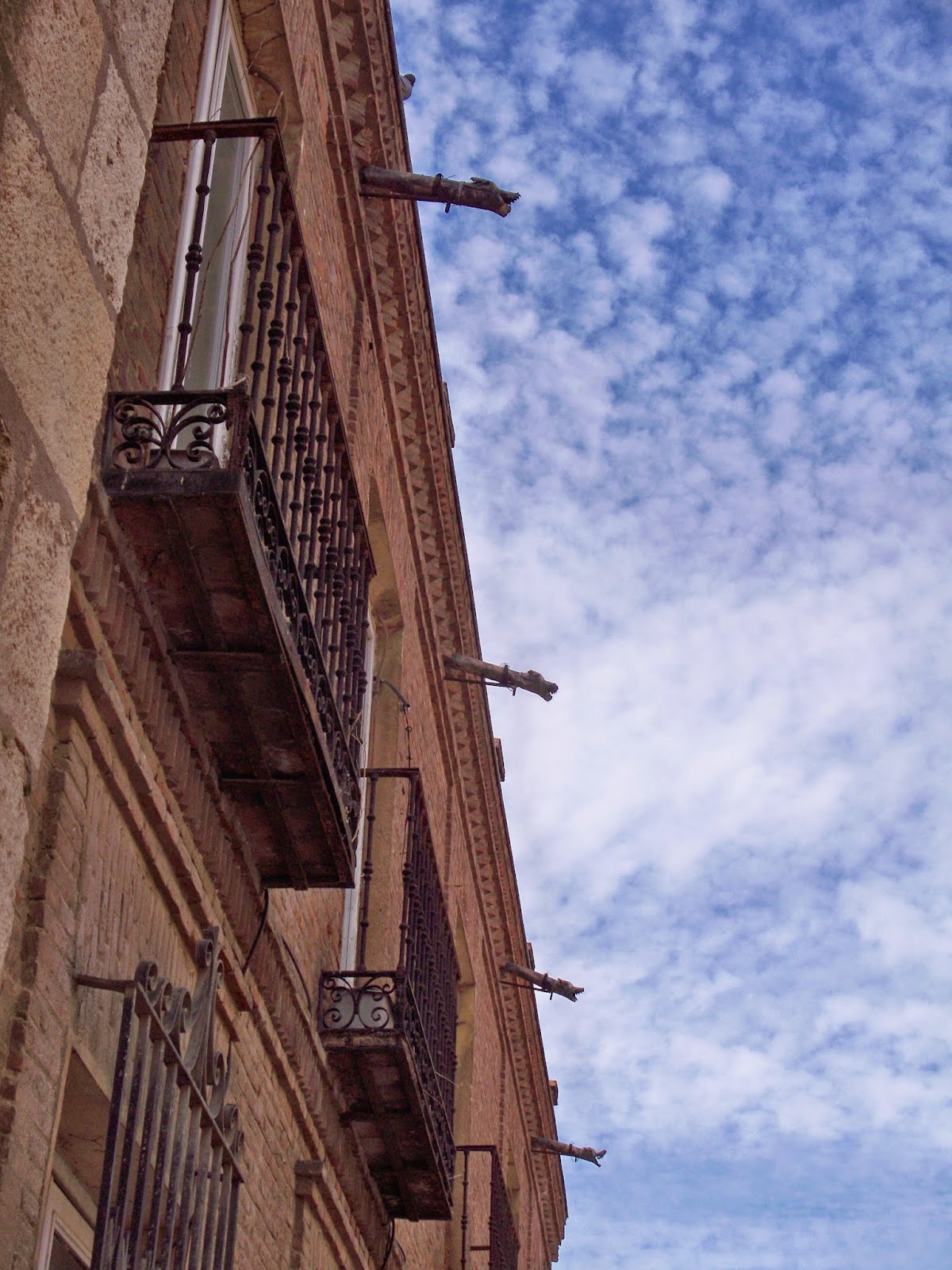 It is partly because of the university and its historic buildings that the city has been named a UNESCO World Heritage Site, and I look forward to attending class in such illustrious locales. 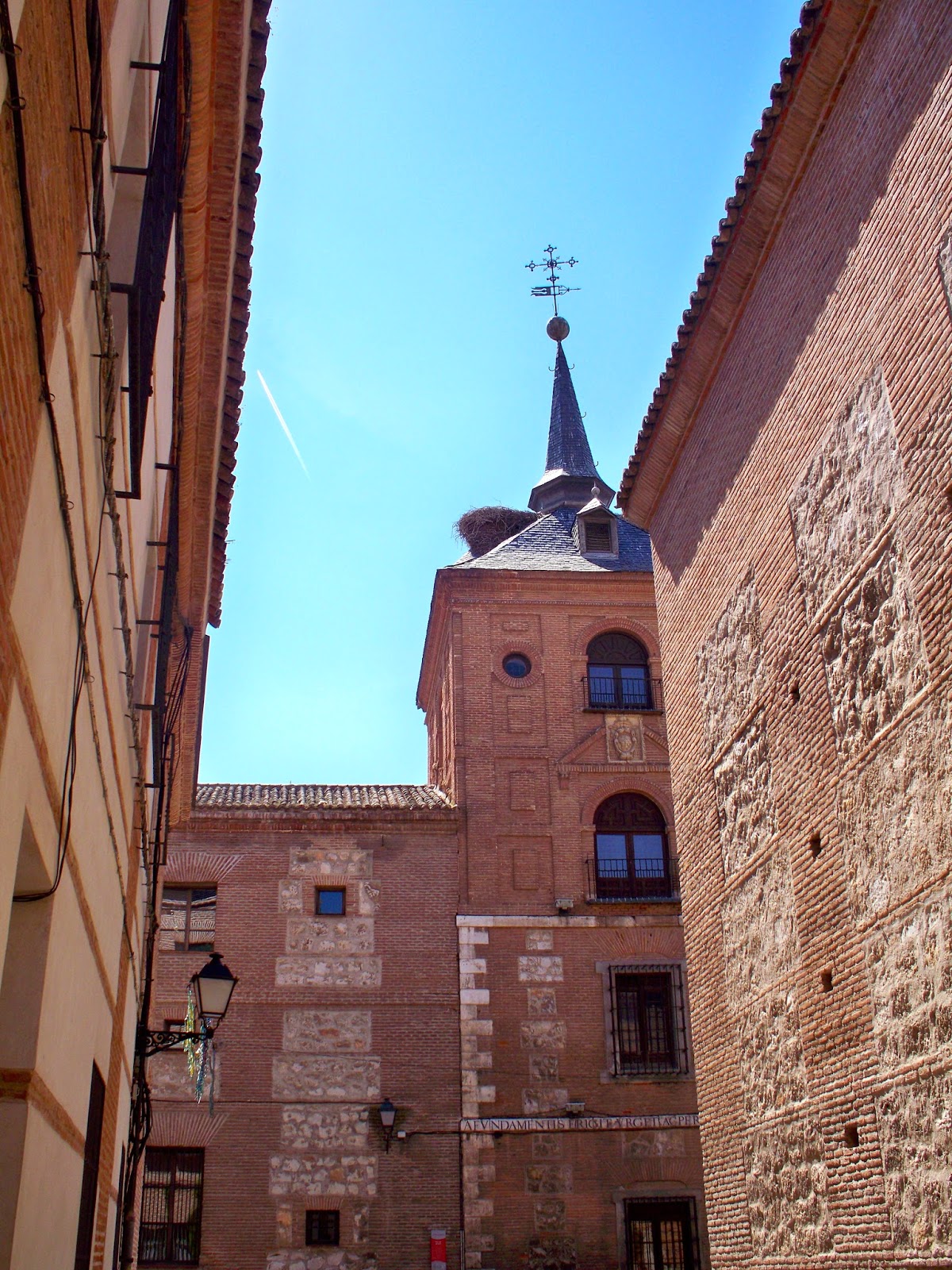 The final big thing that's popped out to me about Alcalá (though I'm sure there will be more, I haven't even been here two weeks yet, give me time!) is the giant stork nests perched precariously on old buildings in the city center. The storks are well-loved in this city, and I do have to stop myself from wondering if it's because this is how all Spanish babies are delivered to new mommies and daddies... 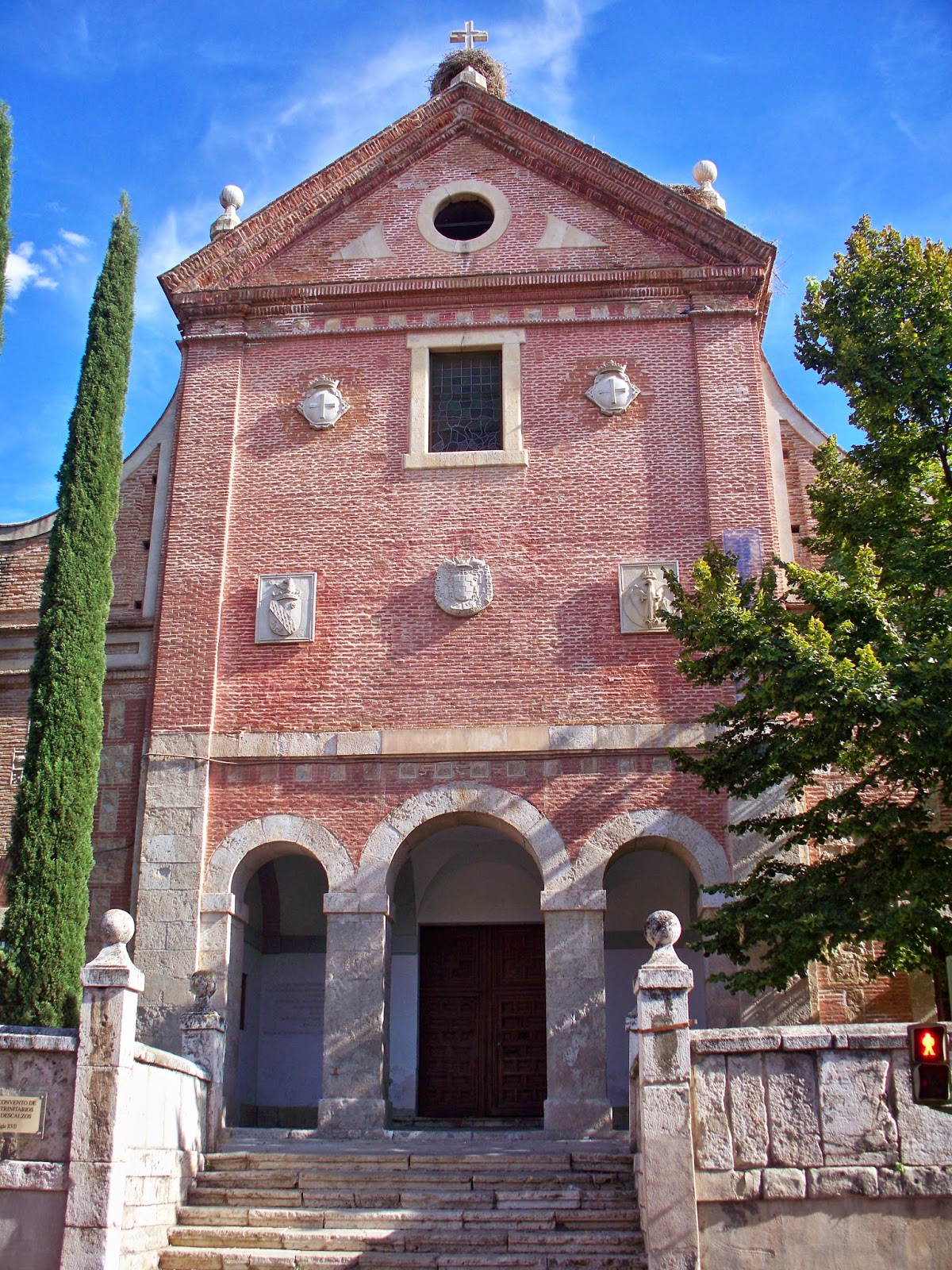 All joking aside, some of these birds do seem to have gone out of their way to find strange places to nest, like the one who thought its eggs should hatch riiiight up there nestled against a big cross. Sure, why not? 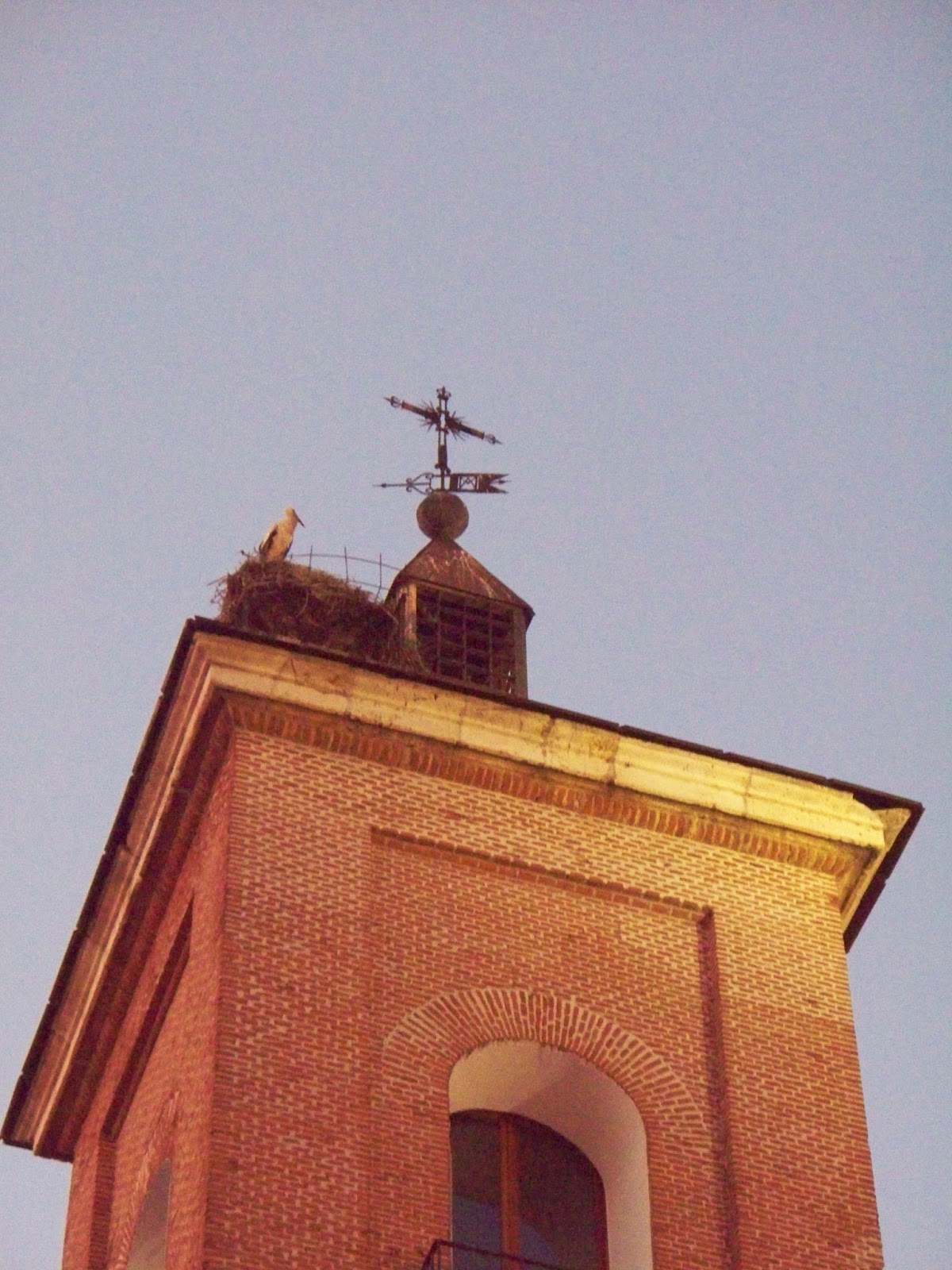 But while the nests were something I noticed right away, it took me a few days to actually see a bird. It seems to me that they come back to their nests around dusk, and the other day I was finally able to whip out my camera fast enough to capture a photo of one.

So there you are, my first impression of Alcalá de Henares is that it's a hot, typically Castilian Spanish city obsessed with Cervantes, its university, and storks. A bit quirky, but so am I, and so far I like it well enough, and I'm not disappointed to be calling it home for the next 10 months. Only time can tell if my first impressions will last!
Posted by Alisa at 5:32 PM