(Almost) Everybody's Favorite Thing to Learn in a Foreign Language 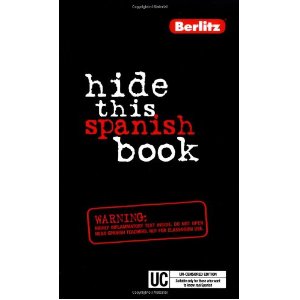 
One of my clearest memories of just before I left for Spain for the first time is some advice that my oldest sister had for me. She said that when I came to Spain, the first thing I needed to do was learn the swear words. Honestly, I failed at taking that advice since I feel like that's something I'm only just picking up now (besides the most basic swears anyway), but I was always a little strange.

Most kids in my high school language classes had these books called something like Hide This French/Spanish Book From Your Teacher and they contained all the filthiest things that you could ever possibly want to say in your new language.

And now I've got my secondary students, who somehow can rattle off a string of swears at me like nobody's business, but still refuse to conjugate verbs in the past tense. Go figure.

So today I'm going to give in to popular demand and teach some Spanish palabrotas (swear words), except I'm going to teach the nice versions (well, nicer anyway), the ones you can more or less say in front of your high school Spanish teacher or to a stranger. Sound like fun? Here we gooooooooooo.

1. ostra--This one is a little bit like saying "gosh" or "jeez" in Spanish, because the word it comes from, hostia (host in the religious sense), is for some reason way more popular than "Dios" or "Jesús"(God or Jesus). It literally means "oysters."

2. miércoles--Literally this means "Wednesday," but it's something that people say to avoid saying mierda, or shit. It's basically the equivalent of saying "shoot!"

The next three are all ways to avoid saying joder, which means "fuck" (in the expletive sense, not the verbal sense...there's a distinct verb for that).

3. jolín--This one I hear a lot at school, both from the kids and the teachers. It's kind of a childish way to not say joder, and I think of it as kind of like saying "Oh fudge!"

6. mi ma--This, I guess, is a way to avoid taking your mother's name in vain?? I'm not exactly sure, but it comes from "madre mía," which literally means "my mother" but is used here in a similar way to how we use "my God" in English.

And these last two are kind of silly to me, because even censored they're still inappropriate (if you're not sure why, it's because they're about shitting on something). If you're going to swear, why not just go all out? But anyway, here they are.

7. me cago en diez--Literally, "I shit on ten," but the diez is a way to avoid saying Dios. The original expression is "Me cago en Dios" or "I shit on God." I guess this one is a way to swear while not feeling Catholic guilt for taking God's name in vain? Don't ask me, I don't get it either.

8. me cago en la leche--Another way to avoid taking God's name in vain, but this one is more gross mental-imagery-wise. It means "I shit in the milk." Um, ew. Question for consideration: why are Spaniards so obsessed with shitting in or on things???

That's all I could think of for now. What ones did I miss? And how many of these are specific to Spain and are not used in other Spanish-speaking countries?
Posted by Alisa at 11:47 AM