An example: The other day, there was a Big Important Meeting in the teacher's lounge during the morning break, which, having nowhere else to go, I played witness to. The subject of the meeting was that the school may possibly have the opportunity to have the government give them some computers for certain classrooms (that's right, there aren't computers in ANY of the classrooms), for the teachers of certain classes (again, no personal computers for the teachers...there are 4 communal ones in the teacher's lounge, and one printer. One. Such a pain.), a mounted projector in the classroom (they only have portable ones), and a computer for each student to use in class.

To me, this sounds wonderful. New computers? Technology in the classroom? You bet your bottom dollar I'd be all over that! It would be so great to be able to show the kids English videos on the computer during class, or have them look up English newspapers online, or whatever.

But during the meeting, a LOT of the teachers had doubts, like "what if the computers don't work right?" and "what if they break?"

It got a little heated, and in the end when everybody voted (not me, I didn't get a vote since I'm not a real teacher), only 4 people were in favor of putting in the request to get all this new technology. 4 out of 20 teachers.

Nobody specifically said this, but I felt like maybe the problem was that some of the people (the older ones especially) were afraid of the fact that they would have to learn how to use computers if the school got them in the classrooms and gave them to the teachers. And, being afraid of change and set in their ways, they voted no.

Of course, everyone's entitled to their own opinion, but I feel like not even putting in the request for this stuff is really just going to hold the kids back. The future is digital, and in order to succeed, the kids are going to have to know how to make use of computers and the internet. Having them in school would be a great way to get started on that.

The reason I say that this makes me feel like I'm living 25 years ago is because in the US, making an argument against getting technology in the classroom would be virtually (ha, pun) impossible these days. In the US, everyone, even many older people, are savvy to the ways of the iPhone and the Macbook (or, you know, those other, lesser brands of internet-wielding devices). Even my mom has a smartphone now (hi mom!), and that's saying something.

I'm just trying to imagine going into my old high school in the US and arguing that having computers in every classroom would be a bad thing because they might break down, and the idea is ridiculous. I would get laughed out of town. That sort of argument might have been made in 1987, when computers were less widely-used, the internet barely existed, and this technology seemed scary and new. But now? No way.

To me, this lack of trust or interest in computers and the internet just seems like one more way that Spain has gotten way behind the times and needs to catch up to the speed that the rest of the world is at, or else spend the next 25 years continuing to be economically and developmentally stunted.

OK, that's all. I've said my piece now and I can try to stop being frustrated that there probably won't be new computers at school next year. *steps down from soapbox*

(One last thing, I'd like to mention that the entirety of this meeting about computers was held in rapid-fire Gallego, and I was able to follow basically ALL OF IT, even when they were arguing at 90 miles an hour! How awesome am I???) 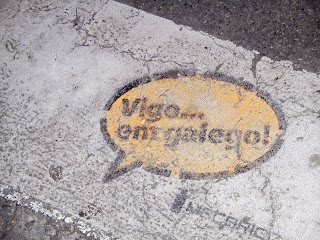