My First Impressions of France

I know you've all been dying to know exactly how things have been going here in my new life in France, and I haven't exactly been delivering the goods. But I'm sure many of you also know just how hard moving and getting settled in can be, especially when it's cut in half by two weeks of vacation (such a difficult life, I know). 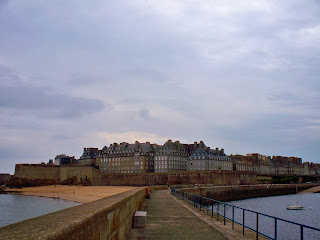 
So to make this easy on all of us, here's a list of some of the things that have really caught my eye or surprised or impressed me about France so far.

I only "worked" (I say that lightly because really I was mostly waiting around for the administration to decide on my schedule) for 3 weeks at school before I had a two week vacation. In fact, French high schools have a two week vacation for every seven weeks they're in school. They say it's because of the long hours that they're there (8-5, most days), but it still seems like a pretty lush system to me! 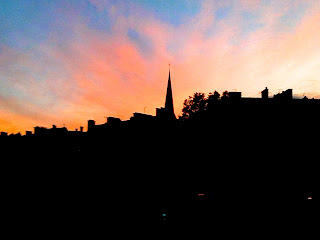 The spire of the old town's cathedral with the sunset


Related to the whole "working so hard while they're in school" thing, French schools have Wednesday afternoons off. I repeat, on Wednesdays they're done with school at noon. Wow!

And one more thing on the theme of strange timetables...in France, everything is closed on Mondays. Banks, shops, the works. It's therefore slightly inconvenient that Monday is my day off--it's like Sunday, take two! They say that this is because shopkeepers feel they deserve a full two days to rest just like everyone else in the world. I agree, in theory, but I'm starting to notice a pattern here with the whole "we deserve lots of time off because..." thing! It's rather confusing, because I keep trying to go out and get things accomplished at the bank or the store at a time that I think they should be open...only to be foiled by weird opening hours. C'est la vie, I guess. 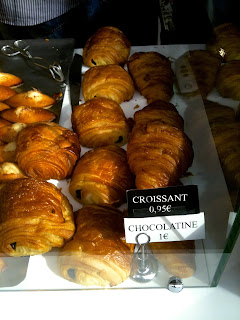 French food has the fame of being among the best in the world, right? So far, that's mostly been my observation. Unsurprisingly, I've been regularly eating my weight in brie and Orangina, but what has surprised me is the fact that I've actually gotten sick of eating bread and carbs. I never in my life thought I would say that, to be honest. But here I eat nothing but baguette sandwiches, crêpes, kouign aman (a Breton cake with a name in Breton, pronounced queen ahmahn), pain au chocolat, etc. etc. And I'm...weirdly tired of it. Woe is me, I know. 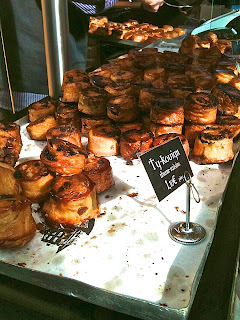 I expected to have problems with the French language after having lived in Spain for 3 years, to be constantly mixing it with Spanish. And so far, my fears have absolutely come true. I keep saying things like "Oui, c'est limpe," which means...absolutely nothing in French, and then people stare at me like I'm insane. I'm trying to say "Yes, it's clean," except the word for clean in French is propre, which has nothing to do with the word in Spanish (limpio). Oops.

I knew about them calling McDonalds McDo and university la fac (sounds like the f-word), but I now also know that they call Coca-Cola simply coca, which makes me think they're talking about cocaine...every single time.

And I do remember learning in high school that French people sometimes use on (one, the pronoun) instead of nous (we), in order to avoid having to remember more complicated verb conjugations. But I had no idea it was so widespread! I've barely heard the word nous since I've been here. 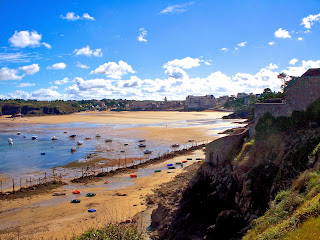 
I've also been surprised by the amount of people I'm apparently allowed to use the informal "you" (tu) with. I'd always been taught that as a sign of respect in France, you used the formal "you" (vous) with most people, except your friends (and especially with your elders). So I expected to be vous-ing it up at work, particularly, where I'm by far the youngest teacher. But no, so far I guess we're playing by what I think of as "Spain rules," where everyone is tu except the elderly and people in restaurants and stores. I remain confused.

The French have the fame of being arrogant, but so far I haven't noticed that at all. Everyone here has been nothing but friendly to me. But what has surprised me is how funny I find them and their little habits. 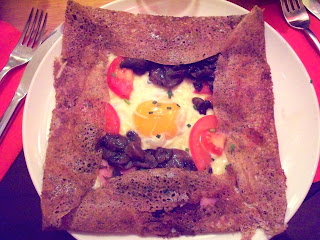 Galette, or a salty crêpe, is a typically Breton food


For example, people (women especially) sometimes make this weird noise when talking. It's a quick inhalation, almost like a gasp, sometimes accompanied by the word "oui," which I guess (like quoi) is some kind of placefiller, but to my foreign ears it sounds like a gasp of surprise or fear. So whenever they do it, I in turn am surprised and look around, expecting to see something weird or scary in our vicinity, only to realize that it's just the French being French!

Another little quirk here is that people appear to be obsessed with license plate numbers. The last two numbers of license plates in France identify which "department," or area (of the 96 in mainland France) the car is from, and so when people see bad drivers here, they immediately fixate on the number of their license plate, and thus where they come from. You hear a lot of "Putain! That guy's cutting me off! Oh, of course, he's a 22!" (22s are our neighbors here, in Côtes d'Armor). You also hear a lot of "My god there are a lot of out-of-towners here today! Look, a 94, a 75! So many Parisians!" Ille-et-Vilaine, the department where St. Malo is located, is #35...so of course no one ever has anything bad to say about that number! 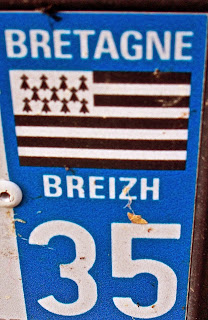 
I'm sure I'll continue to discover more strange quirks about life in France the longer I keep living here! Stay tuned...
Posted by Alisa at 9:58 PM