So you know that part in Pride and Prejudice (if the answer to this question is no, we cannot be friends) where Elizabeth and Darcy are dancing for the first time and she's trying to make him have a conversation with her and she says "We are each of an unsocial, taciturn disposition, unwilling to speak, unless we expect to say something that will amaze the whole room, and be handed down to posterity with all the éclat of a proverb." ?

Well, that there is exactly the reason I never publish anything on this blog. I have tons of ideas and I write them down, but they never seem perfect enough to show to the public. And so they waste away until too much time has passed and they no longer have any context or meaning.

So here I am writing an entry with little to no content, in order to not nitpick it to pieces and never actually publish it. Here's what I have to say: this past weekend was nice, with beautiful weather (for once) and plenty to do. I got to hang out with couchsurfing people, be productive, go to a Galician festival where people were drinking wine from bowls which were tied around their necks (also known as San Blas) and watch the Super Bowl until 5am with my roomies and cook and eat an American feast of hamburgers, hot dogs, chicken wings, chili, and brownies. And it was good.

Until next time, try not to be too hard on yourself (and I'll attempt to do the same). 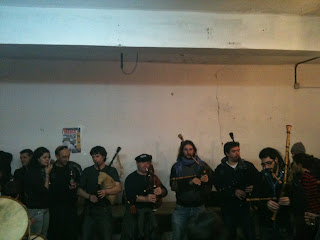 Bagpipers entertaining us at the festival

Pulpoooooo
Posted by Alisa at 6:51 PM