Some Reflections on Why I Love My Job

I live for days like today. No, not because it's raining the kind of rain that's more like just simply living inside a cloud. Also not because I got up early to go to work and then one of the other teachers wasn't there, so I ended up waiting around all day to only teach one class.

It was because the one class I did teach was awesome. I mean, I spent half of it screaming at the kids to be quiet so I could teach them, but at this point I expect nothing less than that. I figure it into my lesson plans. It's a given.

But it just feels so good to show up every day at a job where the people you're working with (in my case, kids) scream your name and are thrilled to simply have you there. Then they ask you to make your "famous" fish face, and THEN they say they heard a rumor that you sang a song to the 3rd years last year and are a really good singer (laugh with me, please...hahahaha) and want you to sing to them. Not only is this hilarious, but it's an excellent bargaining tool. "Yes, of course, I'll make the fish face (sometime) and sing (at the end of the year), but ONLY IF YOU SPEAK ENGLISH AND BEHAVE, BWAHAHA." (Evil laugh censored because it would have only egged them on more)

Then we continued on with my lesson, a quiz on whether the kids are more Republican or Democratic, and I was shocked at the amount of thoughtfulness they put into their responses (which, granted, weren't always in English, but learning American culture counts too, I figure), and how engaged they were. Classes like that are so much fun.

My job satisfaction is very high, clearly, and not only because I have 13-year-olds who want me to sing to them. I also have 7-year-olds who grab my hand on the playground and won't let go. I have 16-year-olds who try to find me on Facebook (good luck, kiddos). And I have every age in-between who love to say hello to me every time they see me.

Now, I'm not bragging that I'm the greatest teacher that ever lived--I'd be delusional if I thought that a huge reason these kids go ape over me isn't because I bring them candy and we play games almost every day in class.

But, as the principal of the school said, after telling me that they all love me and me citing the exact reason above as to why it's clearly a superficial love--"But still, kids don't take to just anybody, you know. Some people just don't know how to relate to them, and you do. So that's something."

So the more I think about it, the more I know that my future life and career has got to involve kids somehow. After all, it would be a shame to not do something that I clearly enjoy so much and have at least some talent for.

Plus who would I make my fish face for?? It's gifts like these that, if possessed, must be shared with the world. 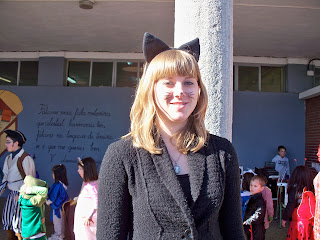 A person known as TEACHEEEEER, making not the fish face, but the cat face (not as beloved).