I spent this past weekend going on a little jaunt up to León in order to celebrate the festival of San Juan, or the longest night of the year. There, I did the following things (in no particular order):

1. Ate loads and loads of food cooked by Spanish grandmothers
2. Saw the outside of this cathedral (we kept missing the times when the inside was open, which were at weird hours because of the festival)-- 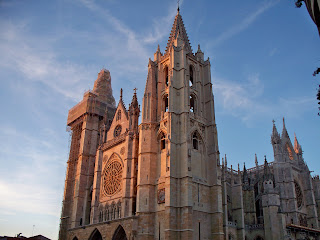 3. Saw Spain kick France's butt in the the Eurocopa 2012
4. Made chocolate chip cookies for a crowd of Spaniards, who gave their approval
5. Saw a fireworks show, during which I pretended it was the 4th of July since I won't get to see any fireworks then
6. After said fireworks, watched the burning of some figurines (from a political cartoon) in this gigantic bonfire-- 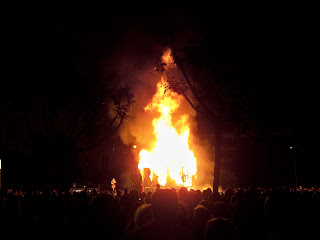 7. Enjoyed the break from the broiling Madrid heat
8. Did not sleep very much

I hope your San Juan, or summer solstice, or whatever you want to call it, was spent in a similarly enjoyable manner!