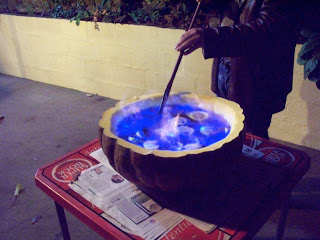 I've had a busy few weeks! I went to a quemada, which is where a group of people cut open a pumpkin, scoop out the insides, pour alcohol (basically lighter fluid) inside with some fruit and spices, then set it on fire to burn off enough alcohol that you can drink it without dying. It was very interesting to see, although I can't say I was fond of the taste of the alcohol! Too strong for me. 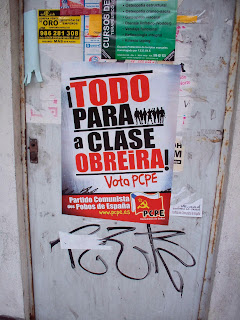 A few weekends ago was Spanish election day. "Súmate ao cambio"as the signs for the PP (Partido Popular, or People's Party) said in Gallego, or "join the change," was the slogan of the winning party. The PP won over the PSOE (Partido Socialista Obrero Español or Spanish Socialist Worker's Party), whose slogan was "Pelea por lo que quieres," or "fight for what you want." The new Spanish President will be Mariano Rajoy of the PP. This is a major shift towards the conservative for Spain, whose current president (Zapatero) is a member of the PSOE. Current public opinion is that the he and the PSOE have not done a very good job handling the current economic crisis. Will a change help things? I'm uncertain, but the Spanish people seem to think it might. 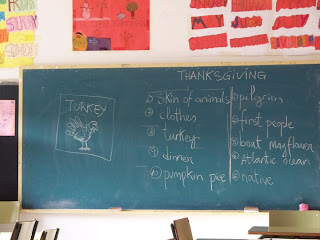 I got to teach about Thanksgiving to my students! On the blackboard there are some of the vocab words that I taught the younger kids, and you can also see a hand turkey made by the English teacher I work with. I thought he did a pretty good job for his first time! 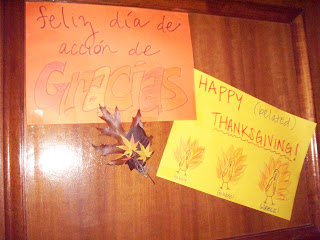 A few days after Thanksgiving, we had a huge celebration at my piso. These are some lovely signs that my roommates made. 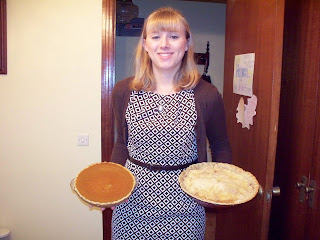 I made two pies for our expat Thanksgiving, and they turned out great! 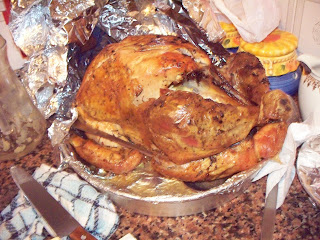 Here's our lovely turkey. Turkey isn't a very common food in Spain, so we had to make a special order for ours from a butcher a few weeks in advance (yes, you heard me right...most meat here comes from a butcher, not the grocery store!). It turned out great though thanks to one auxiliar who is a wonderful cook! I'm so glad I wasn't the one who had to deal with cooking it. It was so awesome to be able to have turkey though! 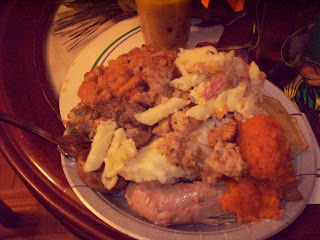 Here's my plate, overflowing with food. There were too many good things to choose just a few of them! I was so stuffed by the end of the night, but it was worth it. 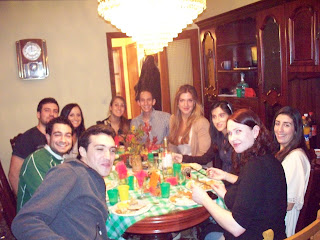 Here are about half of the people who came to our expat turkey day. We had a pretty good mix of foreigners and Americans. There were several Spaniards there and also a few Germans. I think they enjoyed trying out our American tradition. It felt good to still be able to celebrate Thanksgiving with people I like, even though I'm thousands of miles away from home. I still have plenty to give thanks for!
Posted by Alisa at 12:50 AM