Sometimes Spain Makes Me Sad, But Then I Get Over It

Last time, you heard about my apartment searching woes, and now you’ll get to hear about why starting school made me seriously consider buying a seat on the first plane back to the USA.

I don’t mean to sound like such a whiner, really I don’t. I know that I’m incredibly lucky because I live in Europe and I have very few responsibilities and I work only 12 hours a week and I earn enough to live on (if I’m thrifty) and the teachers I work with are very nice. But living abroad isn’t always a piece of cake; I definitely learned that last time I was in Spain as well. It’s hard to hear about the things your family is up to and wish you could take part. It’s hard to miss so many conveniences that you take for granted at home (like not having to change a gas tank by hand, or having the internet, or having a car, or not having to speak a foreign language all the time). It’s hard not always understanding the culture and feeling so out-of-place.

I was homesick last time I was in Spain, but it didn’t really start until a few months had gone by and the newness had worn off. This time, my homesickness was almost immediate. I worried a lot that I had made a terrible mistake in coming, because I just wasn’t enjoying myself, and I didn’t want to be here. I wanted to be at home with my parents. And then I had terrible apartment problems, and I got sick, and the straw that broke the camel’s back was my problems with getting transportation to my school.

When I visited my school right after I got here, the coordinator for my program told me that I should live in Vigo and that I would have no problems at all carpooling the 50km to work with other teachers. However, no definite plans were made and suddenly it was the night before I was supposed to start work and I had no idea how I was getting there the next day. I freaked out a little bit, I admit.

Then the next day, after I had taken the bus to school and realized that it cost 5,85 euros per trip, I was even more worried. I ended up not doing anything at all that day except getting my schedule for the secondary school (my schedule for the primary school came the next day…I work in one school one week and the other the next) and being told that I needed to find my own way to Santiago the next day for orientation because the teacher in charge lives in Ourense, about 100km from Vigo, and couldn’t drive me (like they were supposed to). I discussed carpooling with some of the teachers and felt like they weren’t going to be able to help me, for various reasons. I also got told that in the secondary school, I would be expected to run the classes completely by myself, make up lesson plans by myself and everything, and that the main teachers were going to leave the room (even though it says in our contract that they’re not allowed to do that). Then they didn’t tell me what the students were studying so I could do activities that went along with those themes (like body parts or animals or whatever it might be).

I had no idea what I was doing and was being thrown in headfirst into a very awkward and scary situation. So then I freaked out more.

As I walked the mile from school to the bus stop and then paid the 5,85 to get back to Vigo, and then walked an additional mile back to my apartment, I was thinking of how ridiculous this all seemed and got more and more angry. By the time I made it to the internet café that evening, I was really really pissed off at my school and the whole program in general for being so disorganized. I had no idea what I was supposed to be teaching when I came into school on Wednesday, and I knew that I was going to be thrown straight into teaching on my own. I called my mom and cried and said I wanted to come home, and I was completely serious about it in that moment.

It was definitely a weird feeling to be so close to giving up, something that I don’t do easily. She tried to talk me down and said that I needed to at least try it for a few days and see if I could make it work before giving up completely. I knew she was right, that I couldn’t give up without even trying, but that didn’t make the way I felt go away.

Luckily, I got a ride to school the next day and ended up spending all of my classes just introducing myself and asking the kids questions about themselves. Their level of English was surprisingly low, but I managed. And then I worked out a schedule of rides to school with some of the other teachers, so that made me feel a lot better. I still have to take the bus back a number of days and that’s definitely going to get expensive, and I still have to walk two miles (uphill both ways, no joke) to get to/from each bus station, but it’s better. And the teachers have definitely been going out of their way to try to help me, especially once I told them how much the bus costs!

So after my gigantic freak out, things ended up working out at least somewhat, as they always do. Phew. And now I don’t want to go home anymore or give up, and I’m having some fun…thank goodness! I've been giving classes now for 3 weeks, and everything has been fine. So far I've done a week in the secondary school introducing myself, a week in the primary school introducing myself, and a second week in the secondary school talking about Halloween. I taught the kids the words to Thriller! I guess I can't complain about my job too much when it involves playing pop music in class, right?

Reading over these last two posts, I realize just how verbose I am. So sorry about that! Once again, as a reward if you made it all the way through this post (or even if you just scrolled to the bottom to see how long it was), here are some pictures of my schools. 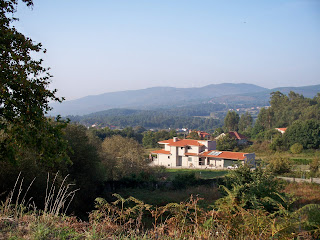 A view out over the countryside near my school--it really is a tiny village in the middle of nowhere! 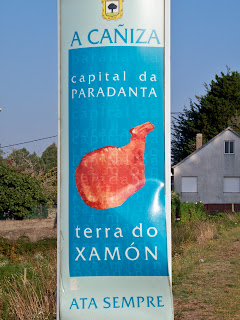 The village is famous for its ham. 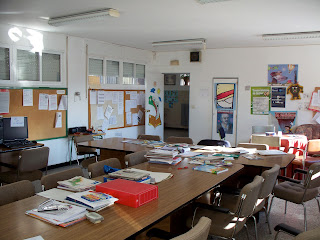 The teachers lounge in the primary school 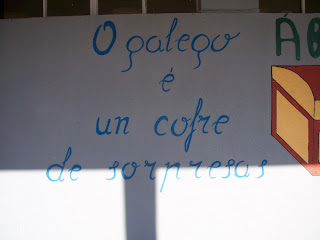 A small example of the Galician language (Gallego in Spanish) written on the wall of the school. Many of the students speak Gallego, and I'm slowly learning to somewhat understand them (although they don't know it, since I'm pretending like I only speak English). 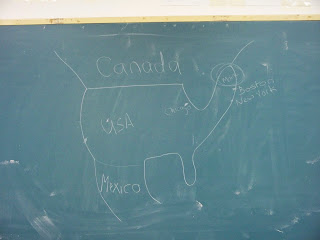 This is my approximation of North America, to help my students understand where I'm from. Pretty accurate, right? I know I'm a fantastic artist and all...hah! 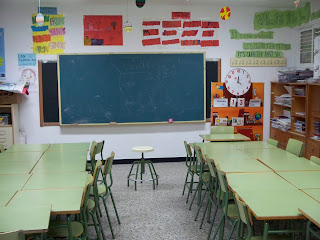 The English classroom in the primary school. In the secondary school, the children don't change classrooms, the teachers do! Thus I didn't feel it was necessary to take a picture of all of their classrooms. You get the idea.

Next time, I promise my stories will be happy ones, to counteract all these whiny posts!