I know I have a tendency to exaggerate, and perhaps that is exactly what I'm doing now. Maybe things won't change as much as I fear, and maybe if they do it will somehow be for the better. Obama told us 8 years ago to "hope" and I'm trying to still hold onto that message today. Perhaps I'll look back in years to come and laugh at my naïvité to think that any president could have such a negative effect on anything as I fear the next one might.

Still, it's hard for me to say goodbye to "my" president, the first one I ever voted for. The one whose campaign I donated to, whose face I had in 24x36" on my dorm room wall, whose buttons I wore everywhere proudly. This was the man I waited in line for hours to see on a freezing February day in Bangor, Maine, feeling like I just might lose my toes to frostbite but it would all be worth it even if I did. 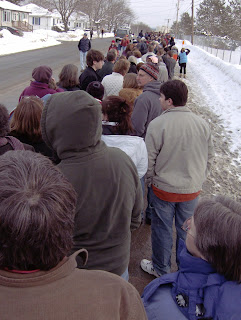 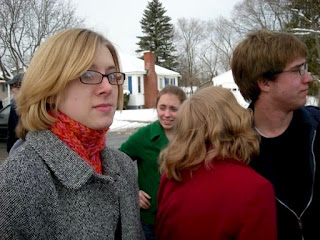 This is how I feel about long lines and frostbite.

Several months later, I cried when Obama won. This was not only because of the momentousness of electing our nation's first black president and a man I finally felt I could actually respect, but also because I was so sad to be in Maine rather than celebrating where we both called home, Illinois.

George W. Bush and 9/11 were the reasons I first started dreaming of going abroad. As a young moldable mind in the early 2000s, the xenophobia I witnessed around me during that time was a major impetus in my yearning to be somewhere, anywhere other than the USA.

When my older sister moved to Norway during that time, she felt unwilling to claim her identity as an American when first meeting new people, for fear of a negative reaction. Under her advice, I sewed a Canadian flag on my backpack the first time I visited Europe in 2006 and prepared myself to deny that I was from the United States to anybody on the street who questioned me. As I recall, this was a common practice at that time. 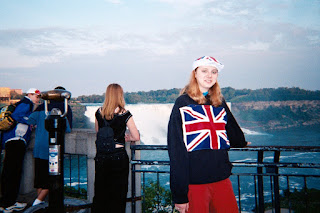 On the Canadian side of Niagara Falls, already set to move my punk arse to Canada or the UK at the tender age of 15

However, Obama being president was what allowed me to move to Spain and stay there (and France) for 5 years without ever feeling the need to adopt a Canadian accent (eh?). I was able to freely claim my identity as American and make a living teaching my culture, not once fearing retaliation for my nationality.

In 2012, I held a mock election in my Spanish secundaria (high school) classes. Not one single group voted for Mitt Romney, and they passionately told me it was because they had "black in [their] hearts."

Obama was not only my president, they seemed to feel like he was theirs in some way too. He was truly a global leader in a manner that few are able to accomplish, and I felt proud to claim him as my own.

Again I say it's hard to say goodbye.

Two weeks ago I visited the 9/11 Memorial in New York City for the first time since its completion. In the museum, I struggled very much to keep my emotions in check. The memories of that day were overwhelming, and it was so hard to hear aloud the heartfelt messages to loved ones left by people in hijacked planes who knew that they would not survive what was coming next.

One of my most emotional moments in the museum, however, was reading the timeline and getting to roughly 9 am on September 11th, 2001, when President Bush was notified about what had happened to the Twin Towers.

As a young hormonal adolescent, I had a great deal of anger inside of me when Bush was elected president, but when I look back now, I know that all of that was sour grapes. I had a juvenile inability to accept that there were other people whose differing opinions deserved to be represented just as much as my own did. Despite my many misgivings about him when I was young, I know now that President Bush was a good man just trying to do his best in a very difficult situation. 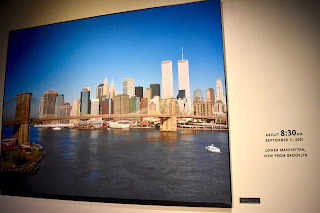 As I was reading that timeline, a voice inside my head whispered to me: "If something catastrophic were to happen in the United States in the next few years, it will be someone else making important decisions about how to handle the situation--someone who reacts violently about insignificant things like an insult by a random person on Twitter. What would he do during a terrorist attack??"

The main emotion I have felt since November 8th of last year is fear. It consumed my thoughts for the first few days thereafter, and then it abated for awhile during our last two months of sanity, as I have termed them.

But now, with the inauguration in less than 24 hours, my fears have come raging back, though I know I am one of the extremely fortunate. I am white, I am straight, I am educated, I have a job, I live in a good area, and I was raised by a family with enough money to never lack anything I truly needed.

But I am still afraid. I'm afraid because it is very likely that soon I will be stripped of my health insurance. I am one of the 22 million who were able to get insured in the United States for the first time in their adult lives because of Obamacare.

I am afraid because I am a woman and I don't know what kinds of laws some ignorant man may make about what I can and cannot do with my own body.

My friends back in Europe keep telling me, ever more emphatically as time goes on, to come back "home" to them. They say they're afraid for me. I understand their urgency--fearing a friend is in danger and not knowing how to help is one of the worst feelings there is.

Their fear is something I'm familiar with myself: I am afraid for those people of color, for immigrants, for the disabled, for those who speak another language, for those in the LGBTQ community. I am afraid for my family and my friends and all the Americans that I've never even met who are in a much scarier situation than I am.

I recognise now, as an older and wiser adult, that the anger I felt when George W. Bush was elected president was my own failing, my own naïve ignorance. But I'm afraid that my gnawing fear of what will happen after tomorrow is not so misplaced, and I don't know what to do about it.

One of my students asked me today, "So who is our president right now?" Understanding their post-election confusion and not wanting to discuss politics too much at work, I simply replied: "Today our president is Barack Obama. Tomorrow, well, tomorrow it will be different."

And it will. It will be a brave new world, and we will all have to face our fears.

But for tonight, on the last night of sanity, I just want to say to the President of the United States of America, my man Barack Obama... Thank you for your service. You were amazing, and I am so proud to have been able to call you my president for the past 8 years. 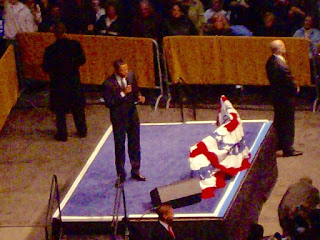 Obama at the Bangor Auditorium in 2008, when we were both less wrinkled and more innocent

If anyone has any advice on how to abate my fears about Donald Trump, I welcome it with open arms. I am already planning a trip to a Women's March on Saturday in sisterhood with those who will be marching on DC (like my actual big sister, who I could not be prouder of). How will you fight your fears?
Posted by Alisa at 4:48 AM