In Defense of Being Boring 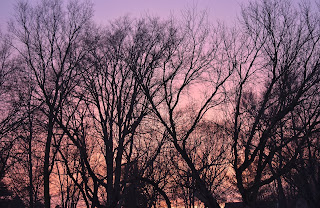 For the past several years, this was the time of year that the anxiety started. When the probing questions began pouring in. "So what are your plans for next year? What are you going to do after your contract ends?" And being that I never had the slightest clue, I felt panic. Some people are good at and even enjoy flying by the seat of their pants, not planning out their lives in advance.

I'm not one of them.

I like the idea of security, of knowing what's next. I really like to have a solid plan in place.

This personality trait doesn't mesh so well with being a nomad, as you might imagine. So every year around this time, as fear of the future crept up on me and I stared that great wide unknown right in the face, my panic would turn verbal and I would begin to muse aloud to all the people close to me about my possibilities, the pros and cons of each, and what they thought I should do. (This sounds really annoying, but luckily the majority of my vagabond friends were going through the same thing, so I like to think I lent an ear just as much as I abused theirs!)

Last year, one day when I was moaning about the difficulty of having to make an enormous life choice EVERY SINGLE YEAR, one of my friends said I should remember that, although I had to make these big choices once a year, other people were choosing every single day to be boring and not do anything with their lives. At least I was out there seeing the world while going through these yearly crises!

I'm not really sure what exactly she meant by "boring," and I wouldn't presume to speak for her on the subject. But I know exactly what it meant to me.

Those "boring" people went to the same 9-5 job every day and sat around watching TV at night. They went to the same restaurants over and over, and they got enormously overexcited about unimpressive things like home improvements and the occasional night out with friends.

In short, they were living a life remarkably similar to the one I lead right now. Boring.

The life I have right now is exactly the one I was afraid of having this time a year ago. I worked so hard every year to find a way to stay abroad, partially because of the fun I was having there, but also because I was afraid of what would happen if I came back. I had based my identity around being "better" than all the people who had never left my home country. I perceived myself as more interesting than them because I was abroad, seeing the world and having adventures. And if I came back, if I became one of the "boring," then how would I be able to maintain that perception of myself as superior?

I think in the travel community, this is a common misapprehension. "We travel the world, so we are more interesting than you. Quit your day job, and you too can become interesting and therefore happy!"

But I've noticed lately there is true contentment to be found, not in making life exciting (though some of that is nice too), but in appreciating the good parts of life exactly the way it is. Noticing those tiny amazing moments of every day.

This weekend, for example, was a great weekend, even though I did nothing particularly exciting. I worked on a surprise present for my dad's 70th birthday (a sneak preview of which is on my Instagram, but Dad if you're reading this please don't look!), I hung around a little with my cute nephews, I went swing dancing with a friend, I went running in the wonderfully mild 0ºC weather, I had a lovely extended stretching session, I sat around in the warm sunshine watching the clouds go by, and I wrote a nice long letter to someone I care about back in Europe.

To the me of a year ago, I guess that would have been dull because it didn't involve a whirlwind weekend trip to a foreign country. But right now I'm really appreciating all the things I can only do because I'm here at home, close to those I love, choosing every day to be uninteresting and no more special than anyone else.

I faced my big fear; I came back and became one of the boring. And in reality, it's really not so bad. I may not view myself as "superior" to other people anymore, but I do feel more comfortable just being myself, and I think that's what's more important in the end.