The Danger of Reminiscing Too Much

The other night, I came home from spending the holidays with my family to find the heat not working. The thermostat said 45ºF (7ºC), and the vents were blowing cold air. On the third day of Christmas, my old house gave to me...no more heat!

What a fun post-holiday surprise.

It was about 10 pm, and after a quick phone call with my dad to try to check some of the easier possible solutions, it was surmised that nothing would get fixed until morning when the gas company would be open.

Facing the possibility of the indoor temperature dropping to that of the outside, and feeling distinctly averse to the idea of dying of hypothermia, I began to layer up like a tried-and-true northerner. Leggings under sweatpants, two pairs of fuzzy socks, two sweaters, gloves, a hat, etc.

After getting all that on and putting some extra comforters and blankets on my bed, I cuddled up under the covers and waited to feel warm. My poor shivering cat lay down right on my neck as we tried to share body heat between us.

Laying there attempting to ignore how cold I was, I started thinking about how this freezing cold sleeping situation, while uncomfortable, was not entirely unfamiliar to me. In fact, it was an experience I had almost on a daily basis during my five winters in Europe.

Most of my memories of living in Europe are pleasant ones, ones that I think fondly of quite often lately: long walks on the beach in the sunshine, having a caña or two on an outdoor terrace with friends, taking weekend getaways to new countries. What I tend not to remember during my trips down memory lane are the bad parts of living there. The truth is, I spent the majority of my time in Europe freezing my ass off. I never bothered to take any pictures of the ridiculousness of layering up like a downhill skier to go to bed every night, possibly because I didn't want other people to know how miserable that situation really was. How I was too poor to afford a comforter until halfway through winter, how I didn't have enough money to live in a newer apartment with central heating, how I was unable to figure out how to change my bombona (gas container) to take a warm shower, how my only option for warmth was a decades-old space heater that I was told might explode if left on all night. 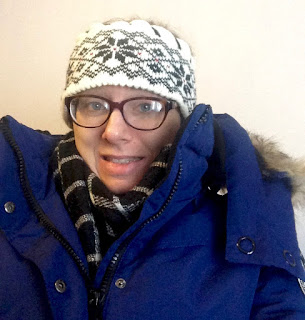 My sleepwear of choice the other night--and pretty much what it would have looked like if I would have ever bothered to photograph my Euro sleepwear as well!

Humans are amazingly adaptable and can make any situation feel normal eventually, which is why after awhile I became pretty accustomed to simply being freezing most of the time. I started showering at the gym in their hot water, I spent long hours in cafés soaking in their heating, and it all started to seem quite natural.

And then visiting family in the States, it was a shock when I stepped out of the plane and immediately started sweating my ass off in the overheated airport.

I am aware now, though I may not have been at the time, of the privileged life I had led up to that point. As an American, I was raised with the expectation of never having to deal with the actual temperature outside. Instead, in this country, we exist in a permanent bubble of 75ºF (23ºC) inside our gigantic homes and offices. I know now that my country's dependence on central heating and air conditioning is one of the many factors contributing to climate change. I know that in many other first-world countries, living with the actual temperature outside is not a matter of wealth, but rather a positive choice to consume less energy for the betterment of the planet. And in most non-first-world countries, there is no choice in the matter at all—you go about your business, regardless of the temperature outside OR inside.

But at that time, it seemed like a marker of poverty that I was living an existence where one of my main sources of heat all winter long was a gas oven and stovetop (both of which I had to light by hand with a match). And that was something I was far too insecure to share with my friends back home who were starting their careers, getting married, buying homes and having babies while I was “gallivanting on a permanent vacation” (in my dad's words). I wanted them to feel jealous of me, not pity for me!

So now that I am back in the States and completely re-accustomed to being cozy inside all winter long, the question is: would I really want to go back to that? I daydream constantly these days about Europe, thinking about how much better life was there, but in doing so I never remember the bad with the good. There were wonderful things about my life there, but it was also kind of difficult. Living life in another language, another culture, when you're making below minimum wage and have no one there to help you is HARD.

Having no indoor heating when you're used to its dependability isn't impossible, but it isn't super fun, either. It makes you want to cuddle up in your bed more than is probably healthy... Although it was a good motivator to go to the gym when that was the only place I could consistently get hot showers, and my carbon footprint was way smaller then. Hmm.

I guess what I'm saying is I need to count the blessings I have due to living in America—I have the ability to be warm the vast majority of the time here, no more lighting ovens by hand. And I actually have extra blankets here to put on myself when the heat breaks and people to help me solve these kinds of problems in a timely manner IN ENGLISH. Whoa.

(Because yes, while I did spend an uncomfortable night all bundled up, the gas man was here by 8 am the next day and it was fixed immediately.)

But at the same time as I am counting these blessings, I can still be aware of the lessons I learned while living in other countries—that it is possible to turn your heat down and still survive, that there is nothing wrong with sharing benefits with other people, that sometimes maintaining the planet is more important than your own personal comfort.

What I was reminded of by the experience of having my heat unexpectedly turned off midwinter is that it's all about balance. Winter warmth versus energy use, personal satisfaction versus planetary salvation. One of my goals for the coming year is to try to stay more towards the middle of these two extremes, rather than allowing myself to be swept away by the selfishness that is normal in American culture.