Roll Out Those Hazy Lazy Crazy Days of Summer!

After what felt like the longest winter ever (I was still wearing my winter coat at the end of May), I was really REALLY ready for summer this year. The absence of real spring plus the fact that the long winter was my first one in 5 years meant that I was super anxious for the sun and warmth to just get here already.

In other words, I was craving those hazy lazy crazy days of summer. And now, they're here with a vengeance, with muggy 35ºC/95ºF weather sin fin. So I'm trying to enjoy them (or at least make the best of them...I whine for winter to be over from the end of February until the moment it gets hot, and then I remember that I actually truly dislike warm weather). But this year, I was smart and I planned a trip down to the Southern Hemisphere for their winter that will coincide nicely with some of the Midwest's worst sultry days.

I have bested you this year, summer, I swear I have! *cue maniacal laughter*

Still, as I said, I'm working on appreciating the lazy days of summer before I leave (soon, very soon), so I've compiled a list of the things I love most about this sweaty season to help me remember to enjoy it! 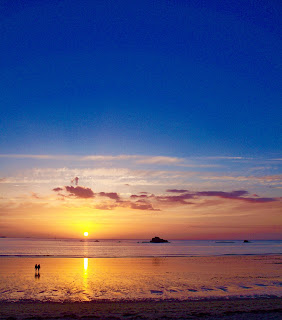 While I no longer live walking distance from beautiful beaches like this one in Brittany, France, there are some lovely beaches here on Lake Michigan that I should take better advantage of. And when I'm down in Australia, I'll get to enjoy the beauty of the Great Barrier Reef, yay! 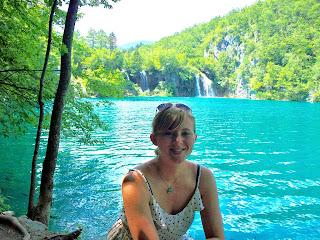 Some vacations (like to the crystalline waters of Croatia's Plitvice Lakes) are hard to beat, but hopefully my upcoming visit to the stunning beauty of New Zealand will come close! 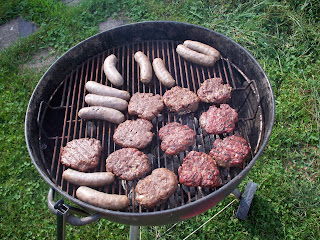 Grilling hot dogs and hamburgers luckily is something that has always been pretty easy for me to do in both Europe AND America, and I'm certain I'll get my fair share in during Fourth of July weekend. Looking forward to it! 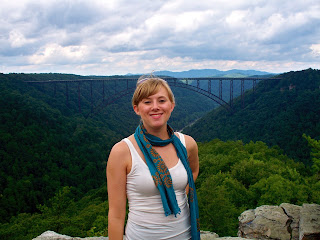 There are great hikes all over the world, and even though some of my favorite ones are back in Galicia, there are beautiful places in America as well, like the New River Gorge in West Virginia. Except when it's being flooded by torrential rain like it is right now. I really hope that the local raft guides (from my sister's company, ACE) are still out there doing their part. #wvstrong 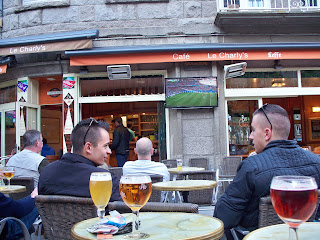 Unfortunately, this year I don't get to watch the Eurocup from adorable sidewalk cafés in Saint-Malo (France) in like I did with the World Cup two years ago. So now as I watch someone win (hopefully, Les Bleus...or I'd also be happy if Iceland won), I just have to pretend that I'm still overseas. ...And not feel guilty for having a beer at 11am--it's totally 6pm back in Europe, don't judge me! 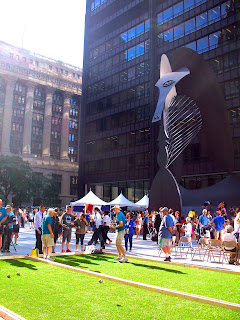 Going to a Bastille Day celebration in Chicago's Daley Plaza in July 2014 was just what I needed to assuage my broken heart after having left France extremely unwillingly only a few weeks before. While I no longer need healing from my breakup with France (or with Spain, for that matter), a nice celebration does me good no matter what mood I'm in! 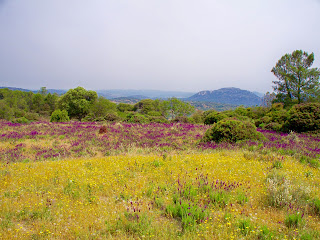 If you follow me on Instagram (@alisabroad), you have probably realized that in the months since I've moved back to the States, I've become even more of a nature lover than I was when I took this photo while hiking in Madrid last year. I didn't even know that was possible! I guess that's what happens when nature is so easy to access. Anyway, almost all of the photos I've taken recently have been of flowers. As I said, it's muggy out there, and that dampness is exactly what Midwestern wildflowers need to thrive. So even though I'm not the most comfortable in the wet heat, I'm grateful for the color it brings into my life. 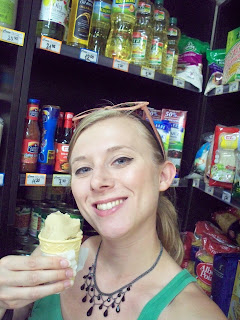 Last year at this time, I was trying beer-flavored ice cream on a food tour of Krakow, Poland. While that particular ice cream wasn't my favorite, I have a few special local spots by my house that DO make some of the best ice cream in the world (IMHO). But they're only open in the summertime (duh). 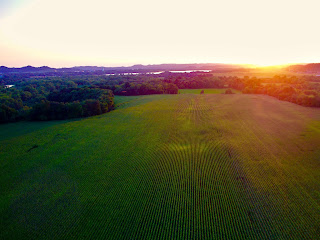 You know you were raised by a farming family when the refrain "knee-high by the Fourth of July" means something to you. Yes, for all you non-farmers out there, us Midwesterners know that it's going to be a good year for the corn when it reaches the height of our knees by July 4th. A small rural secret, direct from me to you. 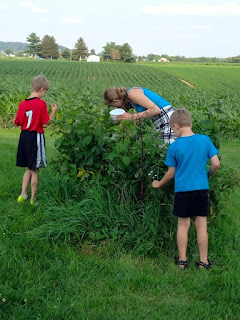 OK, OK, the raspberries in the picture aren't wild at all. But just yesterday I sweated through an entire morning of picking four pints of wild black raspberries in an undisclosed location. And I have the scratches all up and down my arms and legs to prove it! My late grandfather would be so proud. 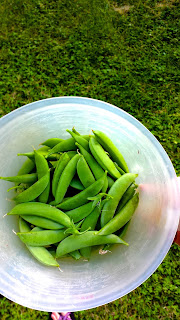 The best part of gardening, in my opinion, is fresh-picked sugar snap peas. When I was a kid, I used to eat a whole big bowl of them for lunch, with nothing else! Heaven. 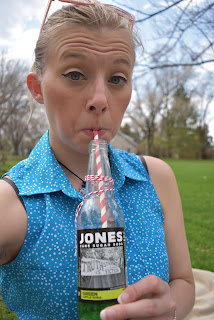 What is it about eating outside that's so much more appealing than doing it inside? I don't know what it is, but taking my meal outside automatically makes it about 1000x more enjoyable. But due to weather, this is really only possible in (you guessed it) summer!

The Fourth of July 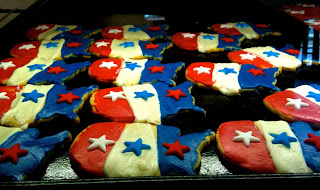 Ah, the quintessential American holiday, when it's almost considered an act of treason to wear any color other than red, white and blue. I truly detest the song "Proud to Be An American" by Lee Greenwood (which is inevitably played at the celebration every year, and which just as inevitably causes me to start ranting about privilege and misuse of the words "freedom" and "American"). However, as the cursed song plays, I usually try to close my ears and just enjoy the beautiful fireworks lighting up the sky while thinking about all the things I DO love about my homeland. Good cookies are one of them! 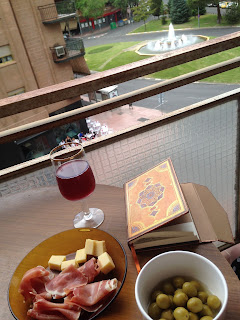 Just another thing I miss about Europe. God, what I wouldn't do for a nice glass of tinto de verano on a Spanish balcony right about now. Of course, even if I had a balcony here, it would be completely useless 9 months out of the year, and which is the real winner between a tiny balcony and a gigantic backyard, anyway? 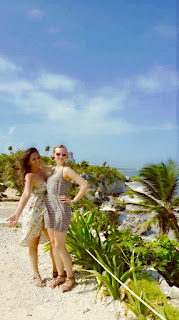 Last summer, I spent a few weeks visiting one of my very best friends down in Mexico. She showed me all her favorite spots, and I was reminded what a good time summer is for visiting friends that are scattered all around the world! I'll have to remember that for NEXT summer when I'm planning my vacation. 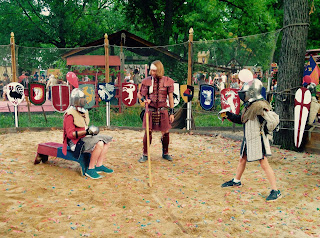 Nerd alert! Yes, one of my favorite parts of summer is going to a historical festival full of people dressed up in period costume pretending like it's the Year of our Lord 1574. And yes, sometimes when it's not too hot, I go in costume as well. Because I am a nerd. And proud of it! 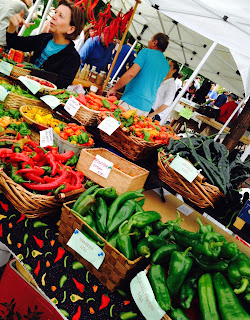 Though nothing could beat selling sweet corn out of the back of my grandpa's van when I was a little girl, going to farmer's markets as an adult reminds me of days gone by. At this one last year in Madison, they even had pementos de Padrón, those little green Galician peppers that are sometimes spicy and sometimes non. But as I found out (much to the disappointment of my tastebuds), when they're grown in America, Padrón peppers are ALWAYS spicy, and not just a little bit. Ew. No me gusta. 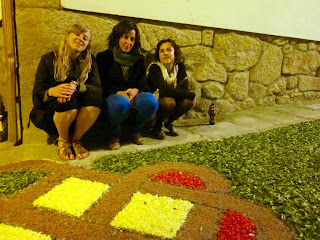 We don't have as many saint days in America as they do in Spain. (Scratch that, we don't have ANY saint days in America...even though I tried to celebrate San Juan last week with a gigantic bonfire in my backyard.) We don't celebrate Corpus Cristi by filling the streets with flower petals and salt crystals in intricately beautiful patterns like they do in A Guarda, Galicia. But we do have local festivals, carnivals, and county fairs. While these aren't as culturally interesting to me personally as Spanish festivals, they ARE the place to go if you want to eat any-food-you-can-think-of-fried-and-put-on-a-stick. 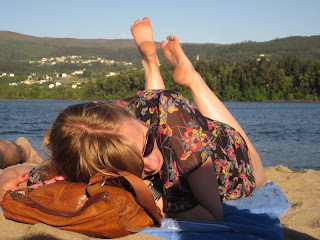 Finally, I come to truly the best part of summer. No matter where I'm spending those long hot days, this is what I want to be doing. I want to be out in the sunshine with friends, laughing until my sides hurt. Is there any better way to pass the time?

How do YOU love spending the lazy hazy crazy days of summer?