You want to know one of my favorite things about traveling internationally? The feeling that you're part of something special. To me, it's akin to being a member of an unofficial organization, which perhaps would be called The International Travelers' Club.

While the feeling of kinship with a random fellow traveler can exist in a domestic travel situation, I feel like there's a certain special understanding that comes when you're talking with a fellow traveler and you're both out of your home country.

You're both out of your element, to some extent--there are certain things that you aren't used to about your foreign environment, things that make you uncomfortable or that you don't enjoy. But there are also things you both like about the new place that you are in, perhaps more than things in your respective home countries.

To put it simply, you have the common bond of being foreigners, which I suppose is something you could feel in any place that's even slightly foreign to you (a "foreign" city in your own country, even). But what makes the bond between two people in a foreign country unique is that you both perhaps feel a little special, to be outside your home country. You are aware that you have an opportunity that many people never get. And that special opportunity makes you feel like you're part of a special club, only known to people who have travelled internationally (but the membership card you have is the stamps on your visa, and the perks you get are the chances to share your experiences).

I can't tell you how many great conversations and deep connections I've had with fellow travelers who were also foreign to the country we were in. I learned a little about their home country and they about mine, and we both learned about each other's experiences traveling the world. Each time I get to have one of these encounters, it only fuels my desire to travel that much more, to get to see the things that the people I have met have seen.

And I love it. I'm a proud card-carrying member of The International Travelers' Club. Are you? 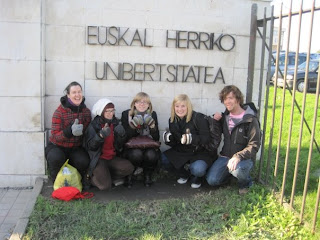 A small example of some of my beloved fellow foreigners from my 2009 Spain experience
Posted by Alisa at 9:23 AM