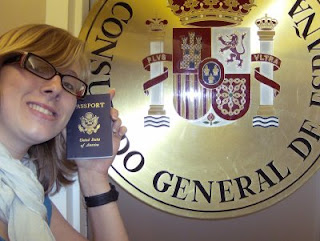 So here's me after I (finally) picked up my visa in Boston, because they wouldn't mail it to me because that would be a liability. Visas are a big hassle if you want to stay for more than 3 months (in Spain, at least), but hopefully it will be worth it. At least next time I'll know what I'm doing (sort of). The Spanish man in the office teased me about my passport picture looking nothing like me. This time, I realized he was teasing (which was what he probably was doing the first time when I thought he was really mean, I realize now). Perhaps the Spanish sense of humor is more subdued than the American? I'll have to find out.


So, getting a visa is a hassle because: you need a doctor's note, proof of funds, all the information about where you're from and where you're going, your birth certificate, your license, every piece of paper you've touched in your whole life (or so it seems), a bunch more stuff, and the worst part: an absence of police record from every town in which you've lived in the past 5 years, each of which must have the Apostille of the Hague Convention on it.

How does one obtain such a thing? Well, if you're me, you go ask the police in your hometown. They have no idea, so they give you a note that says you're not a criminal. Then, you call around and get directed to the secretary of state, whose office you must then visit to obtain the Apostille. Closest office in IL? Chicago. Easy. Done.

Next--Maine. Try the Orono police department. They say you need a letter to obtain a police record. You write the letter and return. Then they say that they can't look you up on their computer because you don't have a Maine driver's license. This leads you to wonder how they prosecute all the UMaine students who are from out of state and commit crimes. Oh wait, WHAT UMaine students from out of state? They obviously don't matter. So then you look around trying to figure out how to get a police record in Maine. UMaine public safety? Nope. It turns out, you have to go to STATE public safety. Where's that? Augusta. Cool.

You go to Augusta on a school day, skipping class. You request a police record. It costs a shit ton of money, and they say they don't know how long it will take. Unfortunately, all the previous running around has made it so that it is now a week before your visa appointment. You tell them your predicament, but they say there's nothing they can do. It will take however long it takes. Great. You just have to hope.

Luckily, they call you two days before your visa appointment and say the police record is ready, so you can go down the next day (skipping class, once again) and get the police record in Augusta, and then you take it over to the Secretary of State (luckily also in Augusta) and get the Apostille. Then you're all set to drive back to Orono (1.5hrs) so that you can go to sleep and get up at 3am to drive down to Boston (5hrs) by 10am. 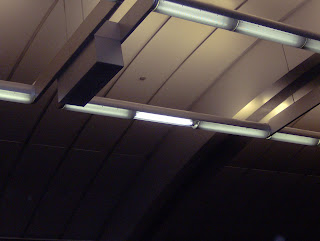 A month later, the visa is ready and you pick it up, as I just did. This time, you take the bus. Much easier. The only downfall? A woman is almost crushed by a falling light that was duct taped to the ceiling. (See left) Looks like someone is going to lose their job. Notice the other duct taped lights nearby. Safe. Very safe. I'm just glad it wasn't me.

After I got back to Orono that day, we trucked on up to Presque Isle for Chris' birthday. Long day.

Now, all I have to do is packing, which will be much easier after we (hopefully) move in at the end of the week. If not, lots of unpacking boxes to take things out and then packing everything back up again for the move, as well as packing things into suitcases. Boxes are my life right now. That is all.
Posted by Alisa at 8:46 PM